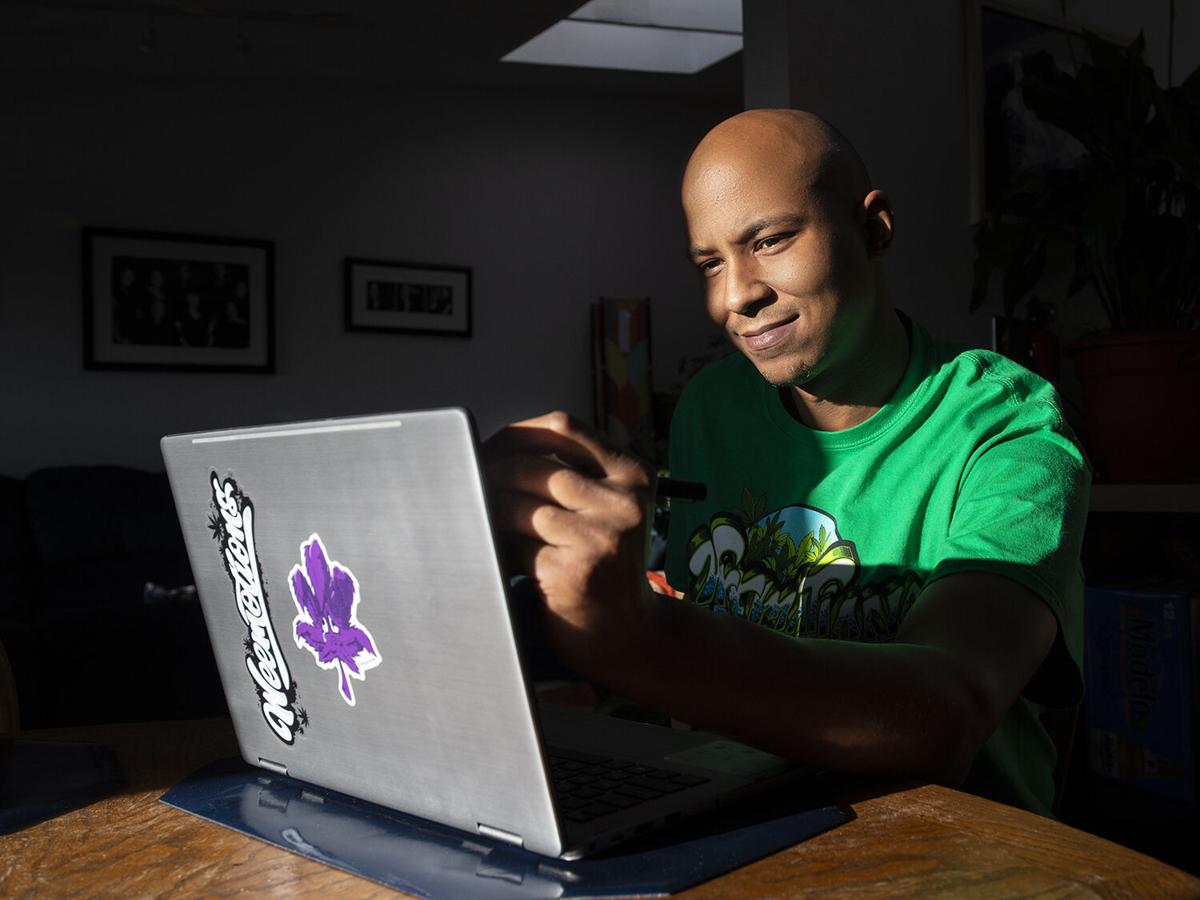 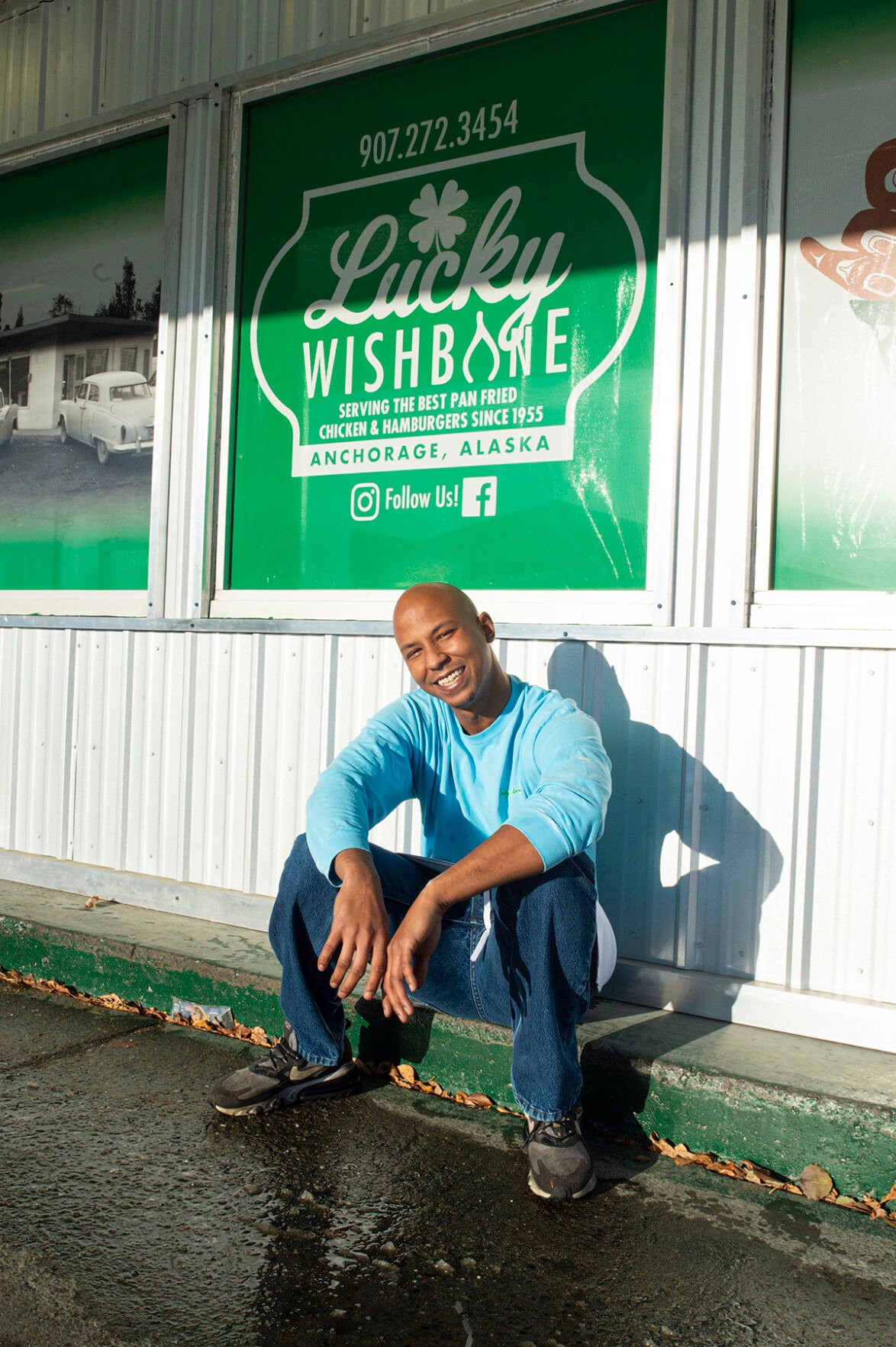 Weemotions creator Joshua Harrison sits outside at The Lucky Wishbone. 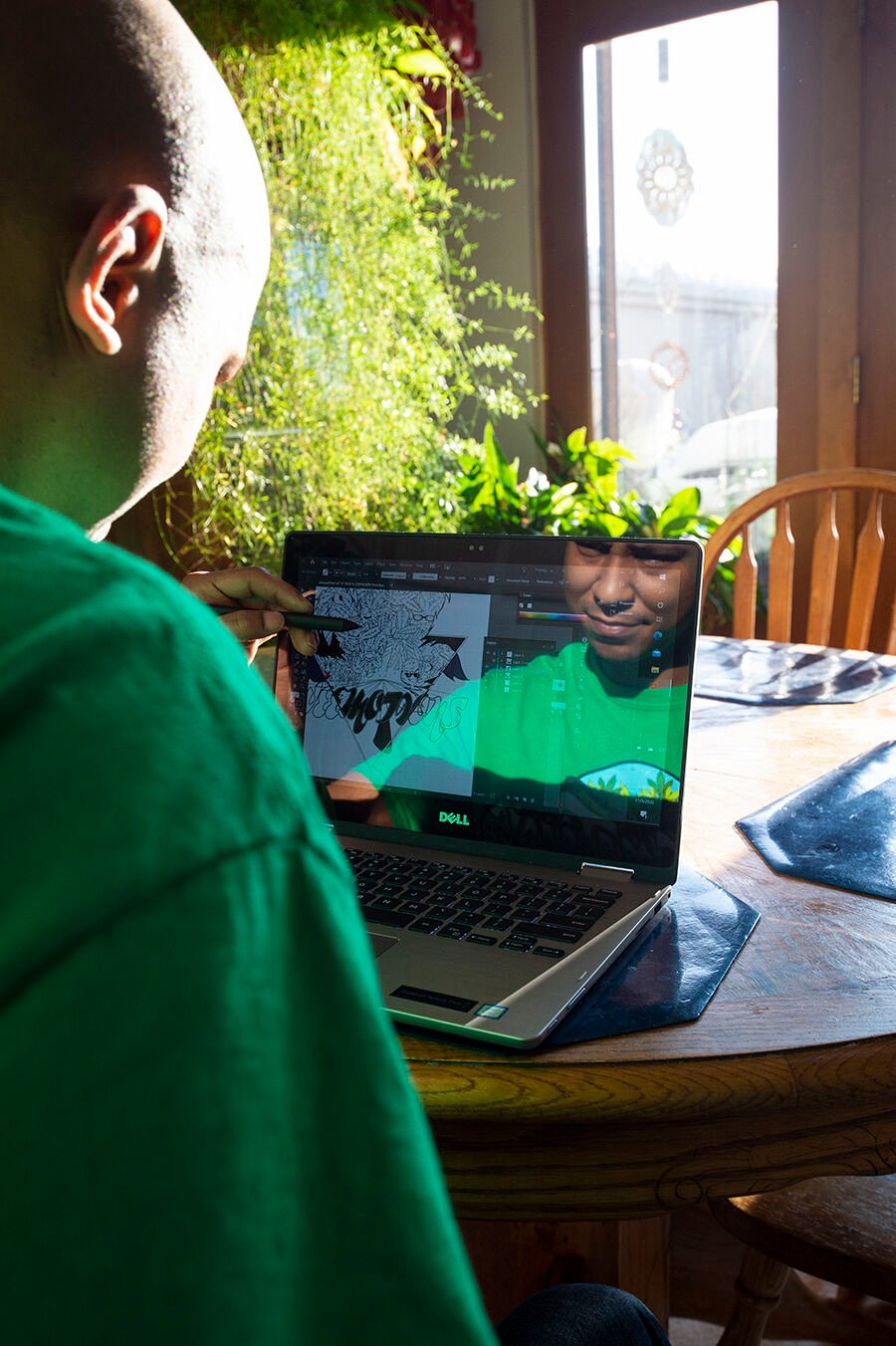 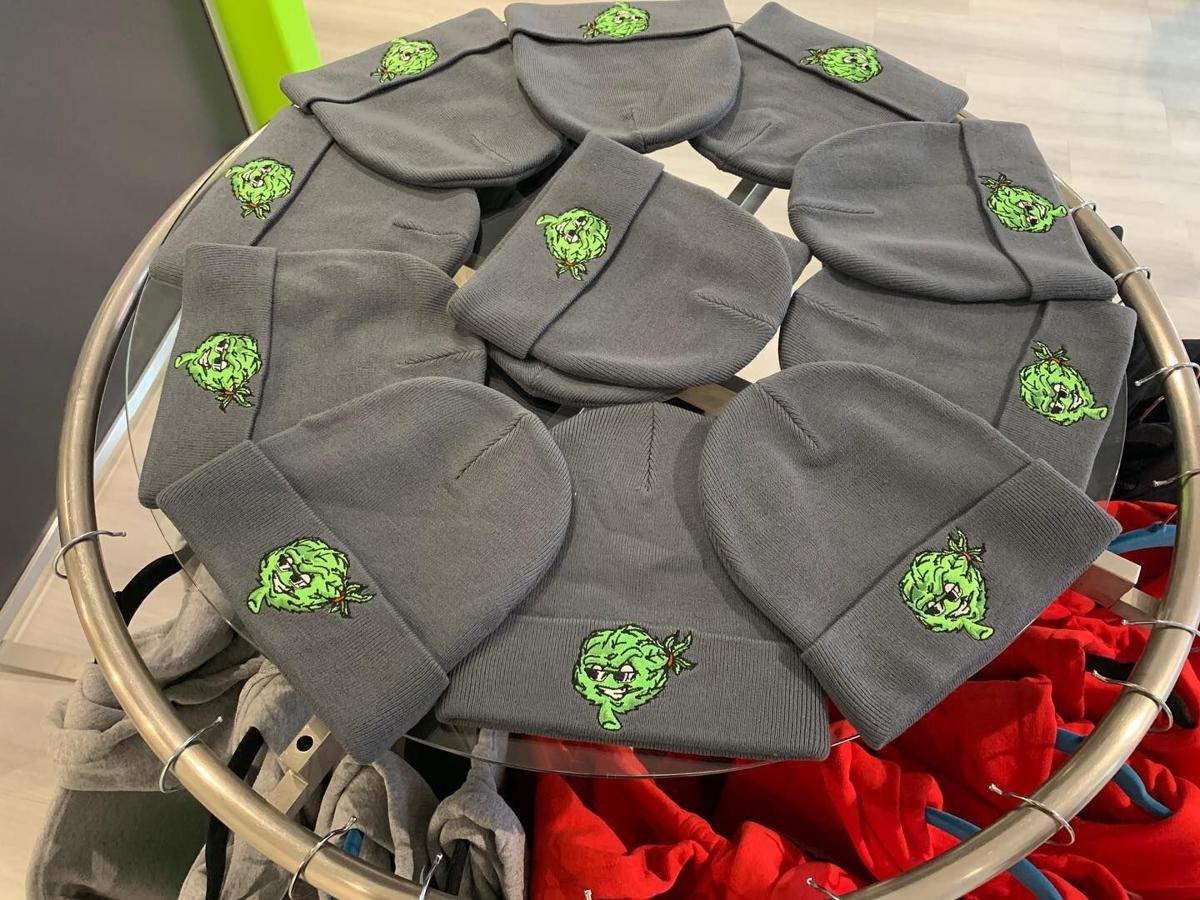 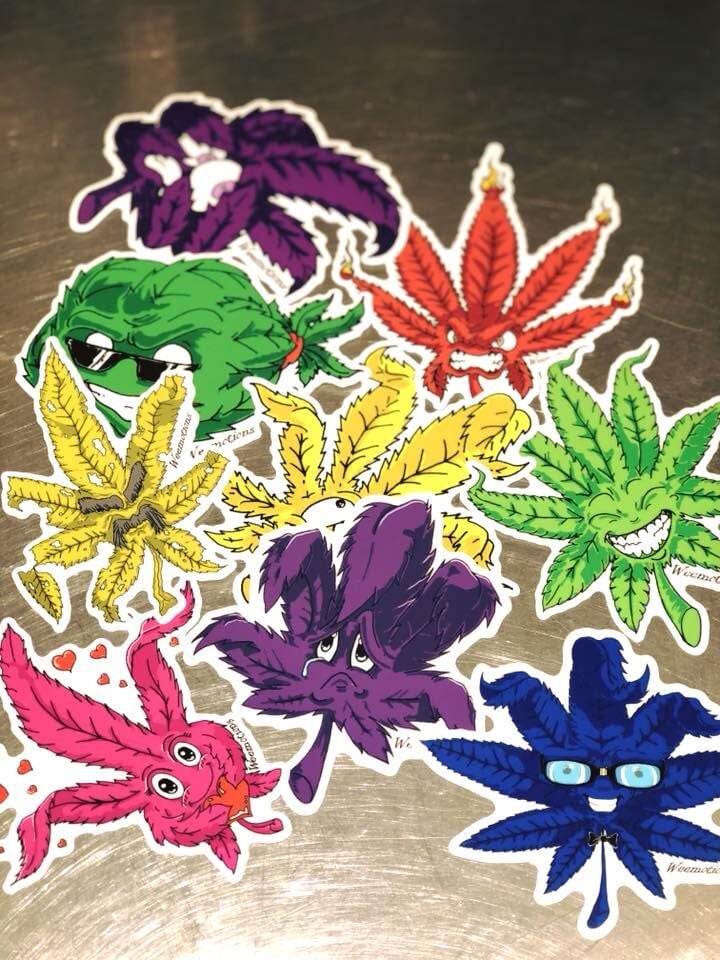 Weemotions creator Joshua Harrison sits outside at The Lucky Wishbone.

On a stormy Monday afternoon, the roads are obscured with a fresh coat of black ice and the remnants of the previous night’s snowfall. With COVID-19 restrictions tightening amidst a surge in cases, Downtown Anchorage is eerily quiet as 35-year-old Joshua Harrison navigates the mile of treacherous road that stands between his home and work. When he arrives at work, the parking lot is mostly vacant. He slips on a black face mask and adjusts his light blue work shirt before entering through the back door of The Lucky Wishbone.

Inside, there is a flurry of activity as apron-clad workers rush about the tightly packed kitchen. Over the sound of cleavers, deep fryers, and the hum of industrial freezers, Harrison greets his coworkers before setting up his small workstation. For the next five hours, Harrison will lovingly prep hundreds of onion rings from scratch.

“All of my friends always ask me how I don’t cry around all these onions. I guess it’s just something you get used to. Pluås, no one else can make the rings like I do,” Harrison explains with a smile.

As Harrison nimbly dunks freshly cut onions into a container of batter before coating them in breadcrumbs, it’s evident that this humble man exemplifies the principle that the journey is more important than the destination.

“I definitely didn’t think that I would be working here for 16 years—you start to fall in love with the process and the people. But I’ve always dreamed of starting my own business. My first idea was to open a food cart called ‘Nacho Average Nacho,’” laughs Harrison

But just like the perfect onion ring has to be plucked from hot oil at precisely the right time, Harrison needed time to find what he’s truly passionate about. In 2017, while sitting on his favorite leather chair in the condo he shares with his mom, he dreamed up Weemotions.

“It seems like for the longest time, people have had an unchanging mental picture of weed. It’s always the same leaf depicted and the same image of some stoner hippie smoking on their couch, but the reality is that Cannabis users are everyone from doctors to teachers. It occurred to me that there’s still a real stigma around the usage of Cannabis,” says Harrison.

Initially conceptualized as a specialized emoji keyboard featuring Cannabis leaf cartoons, Harrison wanted to change the face of Cannabis one emotion at a time. A year later, with a notebook full of inspiration, Harrison had the makings of a great business idea. Still, he lacked the proverbial missing ingredients to get his dream off the ground.

He had never owned a laptop. He didn’t know about the computer programs he would eventually need to digitize his sketches. And perhaps most importantly, he’d never built a business from the ground up.

“When I started, I didn’t know nothing at all. Like, literally, I had to stop so many times just to YouTube or read about how to do something,” says Harrison.

Realizing the complexity of developing an emoji line, Harrison decided to transition his business from tech to an urban-influenced product line. It began with the production of stickers featuring a few of the growing number of characters he had created. Soon, Harrison’s friends were asking for branded, wearable merchandise.

“I never really saw myself pursuing a career in clothing—designing it is just something I love to do. I like to create, and I feel like a lot of stuff is being created by people with money, not by people who are actual [Cannabis] consumers. So, I figured I should fill the niche that wasn’t being filled,” Harrison says.

The niche that Harrison hopes to occupy is as a global brand for Cannabis culture that includes everything from apparel to paraphernalia and even adult comic books.

“The ultimate would be to have a show on Adult Swim,” says Harrison.

To date, Harrison has sunk $40,000 of his own money—or approximately the cost of 4,100 orders of onion rings—into developing Weemotions. But it’s a price he’s willing to pay for one remarkable reason. A crucial element of Harrison’s business model is to manufacture his products locally, so he can provide economic opportunities to Alaska’s disenfranchised communities.

“A good friend of mine was getting out of jail on a felony charge, and I knew it was going to be really hard for him to find a good job. I also have friends who are single moms trying to raise multiple kids. You know, I want to be able to provide a business where people could drop in and work when they are down on their luck,” Harrison says.

Although Harrison might be a while away from realizing his goal, that’s not stopping him from working for it. Harrison’s line of hats, t-shirts, hoodies, stickers, and air fresheners are currently stocked at two Anchorage dispensaries, Dankorage and Tip Top. He’s also planning to launch an online store and website in the new year.