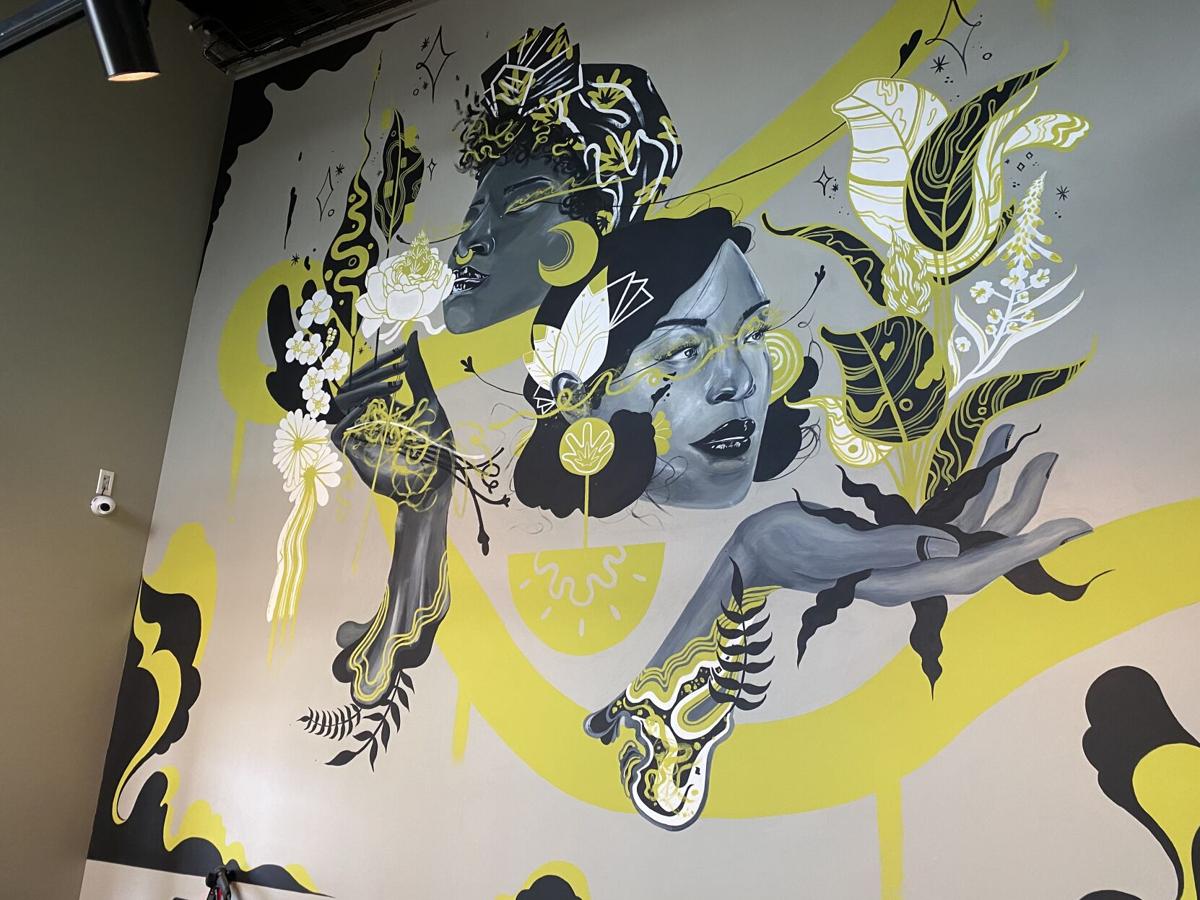 This mural, painted by local artist Rejoy Armamento that greets customers as they enter the Catalyst Cannabis Company’s new shop on Muldoon Road depicts a pair of African-American women in keeping with the more urban theme of the shop’s new east side location. 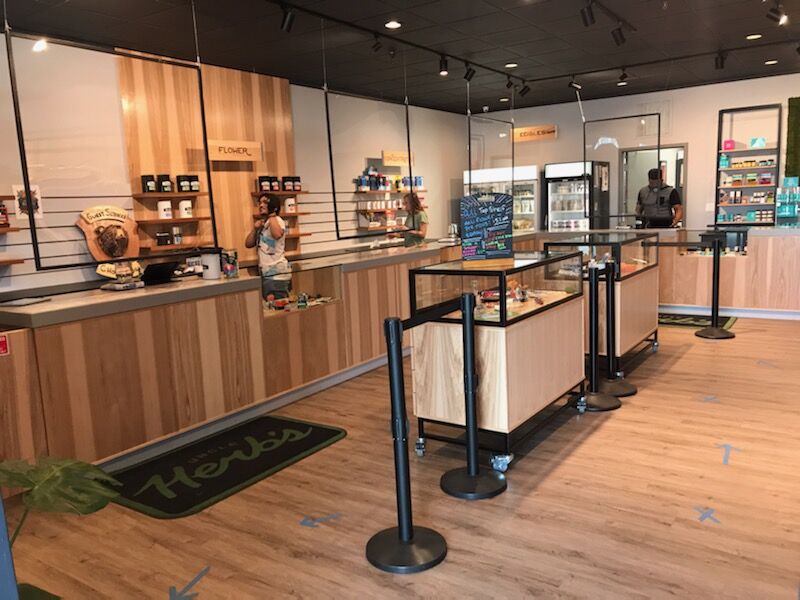 The inside of the new Uncle Herb's in Boniface Plaza.

This mural, painted by local artist Rejoy Armamento that greets customers as they enter the Catalyst Cannabis Company’s new shop on Muldoon Road depicts a pair of African-American women in keeping with the more urban theme of the shop’s new east side location.

The inside of the new Uncle Herb's in Boniface Plaza.

When legalized recreational cannabis first came to Anchorage, the rush was on to put retail shops downtown. After all, the thinking went, that’s where the tourists go and the tourist dollar was anything because there simply weren’t enough Alaskans to keep the newborn industry thriving.

But fast-forward to the still-dumping shitshow that is 2020 and there is no Outside tourist season to speak of, and even if there were, the referendum on whether to allow onsite consumption at shops in Anchorage — which would have given hotel-staying tourists a legal place to enjoy their weed — failed miserably in April’s mail-in election.

Meanwhile on the city’s south side, a pair of businesses that didn’t try to crush into downtown, Spenard or midtown, expanded during Coronavirus restrictions.

In mid-June, Uncle Herb’s, which had its maiden location out on Arctic Spur Road, opened up in the sleek Boniface Plaza, and last Friday, Catalyst Cannabis, expanded beyond its location on Old Seward Hwy. to go even further east, opening on Muldoon Road.

Both new establishments — the first two on the east side of the city — are but a 3-wood from JBER, but neither shop owner said being closer to the joint Air Force and Army base was a major consideration in their new locations.

“At this building in particular, we tried to match the demographic a little more, though we did that on the south side, too,” Catalyst owner Will Schneider said of his industrial-looking new building across the street from Flo’s Pancake House, that includes a two-story annex. “We want to make sure people are comfortable where they’re at. For this one we went with more of an urban hip hop design — like a skate shop or a high-end shoe store and it kind of went from there. It’s a younger, more diverse demographic… People are pretty wowed by the mural or the more industrial feel. The space encapsulates more of the urban landscape.”

Schneider said he hasn’t seen any in-uniform military personnel come into his shop, but surely many have, even though federal law prohibits cannabis use in the service. A city ordinance prevents shops from advertising deals directly to active duty troops, but veterans discounts are allowed and practiced.

“We’ve had double the traffic volume of Old Seward. There’s nothing in Eagle River or Palmer and Tikhatnu is always busy; Also we’re geographically isolated, so we haven’t really taken into account the military,” Schneider said. “They haven’t allowed any medicinal use at the military level yet, so until Veterans Affairs says there’s a medicinal benefit, we’re probably still a ways out before we can start sending fliers out to JBER.”

So what’s to stop a pot shop from doing that now?

“Nothing, really, except ethics and being good community members, more than anything,” Schneider said. “People hold the military in high esteem — as they should — and to not muddy those waters is really important.”

While business is booming at Catalyst’s new location, Lloyd Stiassny says things have been slow at the Boniface location of Uncle Herb’s, but, he said, that’s largely by design.

“We don’t really want that high level of traffic just yet,” he said, citing concerns about Covid-19 spread. “Uncle Herb’s is pretty recognized so we’re seeing most of our customer base right now, but in the neighborhood, we haven’t advertised; not using social media very much… We feel like being low-key; there will be plenty of time as we all transition where we can present ourselves with a grand opening or an event.”

Stiassny said he’d been eyeing a spot on the east side for some time, and really didn’t consider proximity to the military base to be a major factor.

“(The east side of Anchorage) is probably the most underserved market in the state,” Stiassny said. “It’s a long way to these shops and we wondered where these people were going. There’s a lot downtown, there’s Slowburn in Mountain View, but that’s a long way for people to drive to the cannabis store. When you see one, two, three open in a neighborhood, that’s great; it really starts to solidify the neighborhood. It’s also a great place to find local employees that are truly knowledgeable about the industry.”

Stiassny, who also has a third shop in Homer, said he’s not sure whether the Alaska market has reached a saturation level.

Schneider pointed to the surprising resiliency of high price points as proof that saturation isn’t here yet.

“Right now there’s a glut; there’s very little wholesale flower for purchase and the (July 1) dividend threw everything for a loop,” Schneider said. “Prices are going to come down and they’ll be hard to push back up; with that said, the Alaska market is taking a long time for pot prices to bottom out. It’s encouraging to see we have a good price point that’s comparable with the black market. Prices per pound haven’t dropped but 10 or 20 percent over the last three years. I’m surprised every day the prices are holding so strong; we haven’t saturated yet when you’re looking for flower four years into the industry.”

The irony wasn’t lost on Schneider that during the coronavirus lockdown, marijuana, once viewed as a pernicious ‘gateway’ drug and still illegal at the federal level, is now deemed an ‘essential’ business.

“For us, it was pretty phenomenal that we didn’t have to close one day,” Schneider said. “We were also in the unique position where we weren’t eligible for federal funding (SBA, PPP Loans), so tons of marijuana businesses would have closed (if we weren’t deemed essential).”

Schneider said his south side shop’s revenue during the lockdown remained the same, even though his number of visitors dropped by 25 percent.

“We saw fewer customers but each customer had a higher ticket item. The stimulus money — I hate to say it; or maybe Iove to say it — people get extra money and they want to buy more weed.”