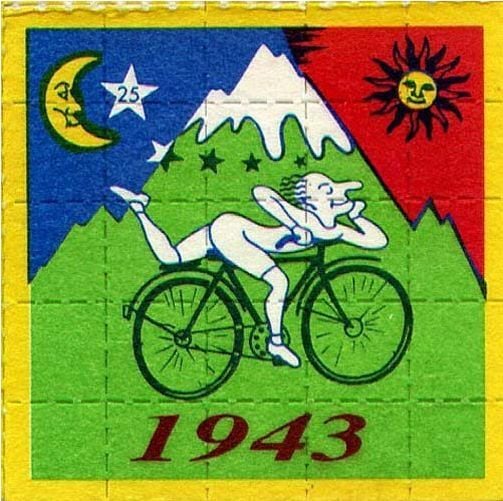 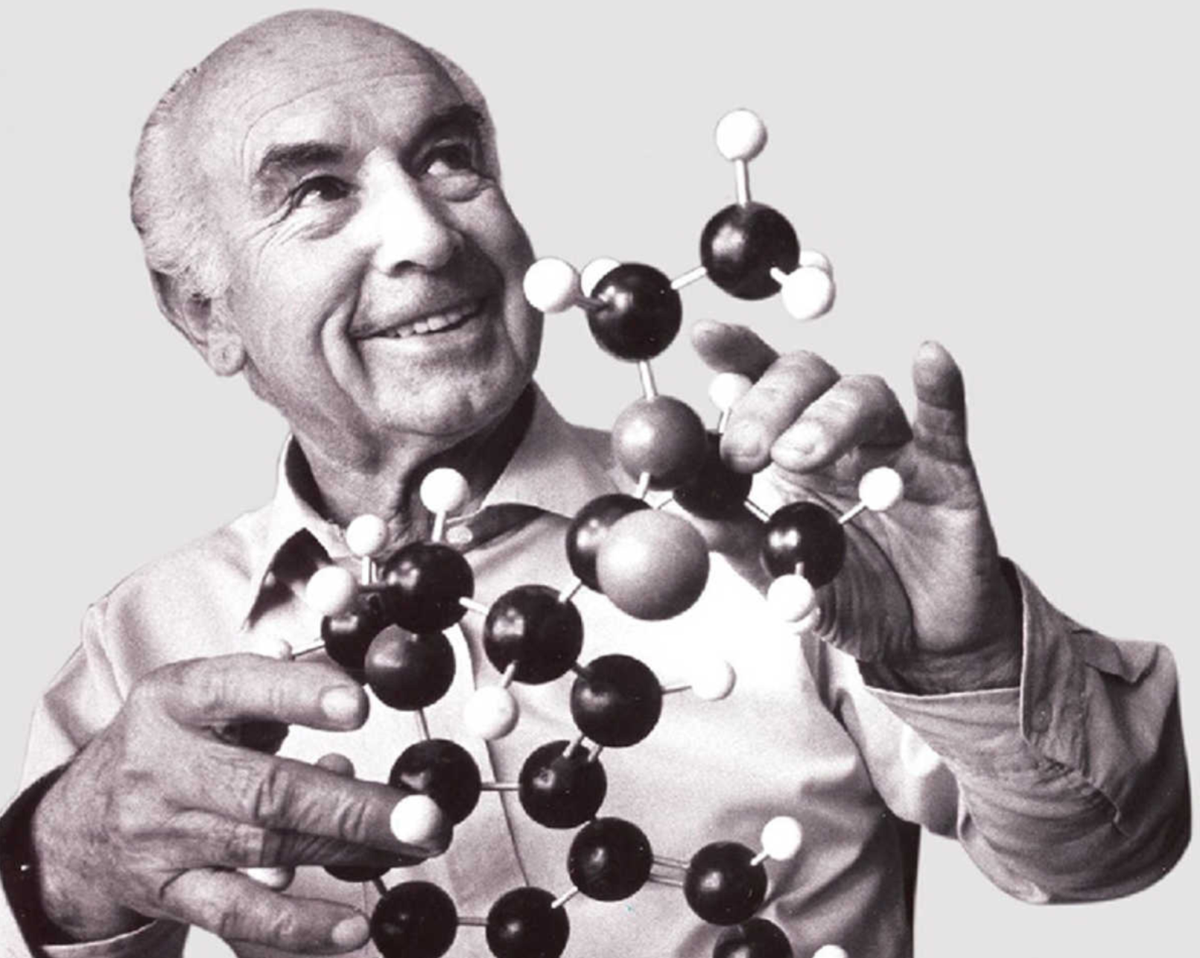 “It gave me an inner joy, an open mindedness, a gratefulness, open eyes and an internal sensitivity for the miracles of creation. I think that in human evolution it has never been as necessary to have this substance LSD. It is just a tool to turn us into what we are supposed to be.” — Albert Hofmann, inventor of LSD, taken from speech on his 100th Birthday.

Everybody is excited to celebrate 4/20, but that’s not where it’s at maaaan… Bicycle Day is celebrated annually on 4/19, across the globe, to commemorate Swiss biochemist Albert Hofmann’s famous bike ride on April 19, 1943, after he ingested the first intentional dose of LSD. Dr. Hofmann is best known for synthesizing, ingesting, and for being the first to experience the effects of LSD-25.

The story behind the discovery of LSD-25 and it’s founder is fascinating.

The natural component of LSD-25 is lysergic acid. It is derived from the ergot fungus, Claviceps purpurea, which grows on rye and other cereal grains. Hofmann’s work on ergot produced several important drugs, including a compound still in use to prevent hemorrhaging after childbirth. Ergot has been used medicinally in China and the Middle East for millennia. During the Middle Ages, ergot was recognized as the culprit for causing St. Anthony’s Fire, an afflicttion brought on from consuming ergot-contaminated rye. It causes gangrene of the hands and feet due to constriction of blood supply to the extremities, thus the sensation of fire. Sufferers were known to go berserk with convulsions, characterized by violent muscle spasms, vomiting, delusions, and hallucinations. It’s been reported that whole villages would go crazy; dancing wildly in the streets unclothed.

“LSD spoke to me,” Hofmann reported. “He came to me and said, ‘You must find me.’ He told me, ‘Don’t give me to the pharmacologist, he won’t find anything.’ “

Dr. Hofmann added, “Because I had the feeling that it would be worthwhile to carry out more profound studies with this compound, I prepared a fresh quantity of LSD in 1943.” On Friday, April 19, 1943, after Hofmann mixed up that batch of LSD-25, he was forced to stop his work midday at the Sandoz laboratory and went home after apparently dosing himself by inadvertently contacting the substance. Hofmann writes, “as I was seized by a peculiar restlessness associated with a sensation of mild dizziness. On arriving home, I lay down and sank into a kind of drunkenness which was not unpleasant and which was characterized by extreme activity of imagination. As I lay in a dazed condition with my eyes closed (I experienced daylight as disagreeably bright) there surged upon me an uninterrupted stream of fantastic images of extraordinary plasticity and vividness and accompanied by an intense, kaleidoscope-like play of colors. This condition gradually passed off after about two hours.”

“The nature and the course of this extraordinary disturbance raised my suspicions that some exogenic intoxication may have been involved and that the lysergic acid diethylamide with which I had been working that afternoon could have been responsible. Moreover, the nature of the symptoms did not tally with those previously associated with ergot poisoning. In order to get to the root of the matter, I decided to conduct some experiments on myself with the substance in question. I started with the lowest dose that might be expected to have any effect.”

Hofmann had ingested 250 micrograms of LSD-25, diluted into water; believing this to be a rather conservative dose, since most pharmaceuticals are measured in milligrams, not micrograms. However, as we know now, Dr. Hofmann ingested approximately two-and-a-half doses.

At that point, Hofmann’s lab notes were discontinued for the day, stating that “the last words were written only with great difficulty.” He struggled to get the words out to his assistant to accompany him home. They were in the midst of WWII and the bicycle was the main mode of transport; so the two hopped on their bikes and rode toward Hofmann’s abode. He soon realized he was in for the ride of his life.

“This bicycle ride which took about 6 kilometres, found such an interest in the mass media. I don’t know why.”

“On the way home, my condition began to assume threatening forms. Everything in my field of vision wavered and was distorted as if seen in a curved mirror. I also had the sensation of being unable to move from the spot. Nevertheless, my assistant later told me that we had traveled very rapidly.”

Upon arriving home, Hofmann asked his assistant to summon his physician.

“The outer world had changed. The room seemed to be full of life. The colors had changed; more intensive. I also had the feeling to be myself had changed; my ego had changed. I had the feeling that I was already out of my body. He (the doctor) could detect no abnormal symptoms other than extremely dilated pupils. Pulse, blood pressure, breathing were all normal. He saw no reason to prescribe any medication. Instead, he conveyed me to my bed and stood watch over me. Slowly I came back from a weird, unfamiliar world to reassuring everyday reality. The horror softened and gave way to a feeling of good fortune and gratitude.”

As the trip progressed Hofmann details, “Now, little by little I could begin to enjoy the unprecedented colors and plays of shapes that persisted behind my closed eyes. Kaleidoscopic, fantastic images surged in on me, alternating, variegated, opening and then closing themselves in circles and spirals, exploding in colored fountains, rearranging and hybridizing themselves in constant flux. It was particularly remarkable how every acoustic perception, such as the sound of a door handle or a passing automobile, became transformed into optical perceptions. Every sound generated a vividly changing image, with its own consistent form and color.”

Hofmann eventually went to sleep and when he awoke the next morning he had no hangover. He felt reborn. “I wake completely fresh and I had the feeling of seeing the world as fresh and wonderful as the very first day.” When Hofmann walked out into his garden that morning after a rainfall, “everything glistened and sparkled in a fresh new light. The world was as if newly created.”

Hofmann called LSD “medicine for the soul” and was frustrated and disappointed by the worldwide prohibition that had pushed it underground. “It was used very successfully for 10 years in psychoanalysis.” Hofmann added that the drug was hijacked by the youth movement of the 1960’s and then demonized by the establishment that the movement opposed and he often referred to LSD as his “problem child,” which he believed could help reconnect people to the universe.

“Not all young people are looking for money and power. Some are looking for a happiness and satisfaction which is of the spiritual world, not the materialistic world,” Hofmann said. “This material world, made by humans, is a dead world, and will disappear and die. I would tell the young people to go out into the countryside, go to the meadow, go to the garden, go to the woods. Indeed, my first experiences with LSD were very reminiscent of these early mystical encounters I had had as a child in nature. So, you see that it is even possible to have these experiences without drugs. But many people are blocked, without an inborn faculty to realize beauty, and it is these people who may need a psychedelic in order to have a visionary experience of nature.”

The celebration of Bicycle Day originated in DeKalb, Illinois in 1985, when Thomas Roberts, then a professor at Northern Illinois University, invented the name “Bicycle Day” to commemorate Dr Hofmann’s remarkable ride.

“The story of LSD is not yet finished at all,” Hofmann said in one of his final interviews. If we learn to use it clearly and under the right conditions; I am sure the beneficial effects are enormous. I think the next step should be a reasonable one; asked that LSD and psychedelics should be legally available in psychiatry. As the doctors have access to morphine, they have access to cocaine; they have no access to LSD. This must be changed. It would be possible to accumulate more knowledge about how to use it and how to get the best of it. But you need a legal situation.”