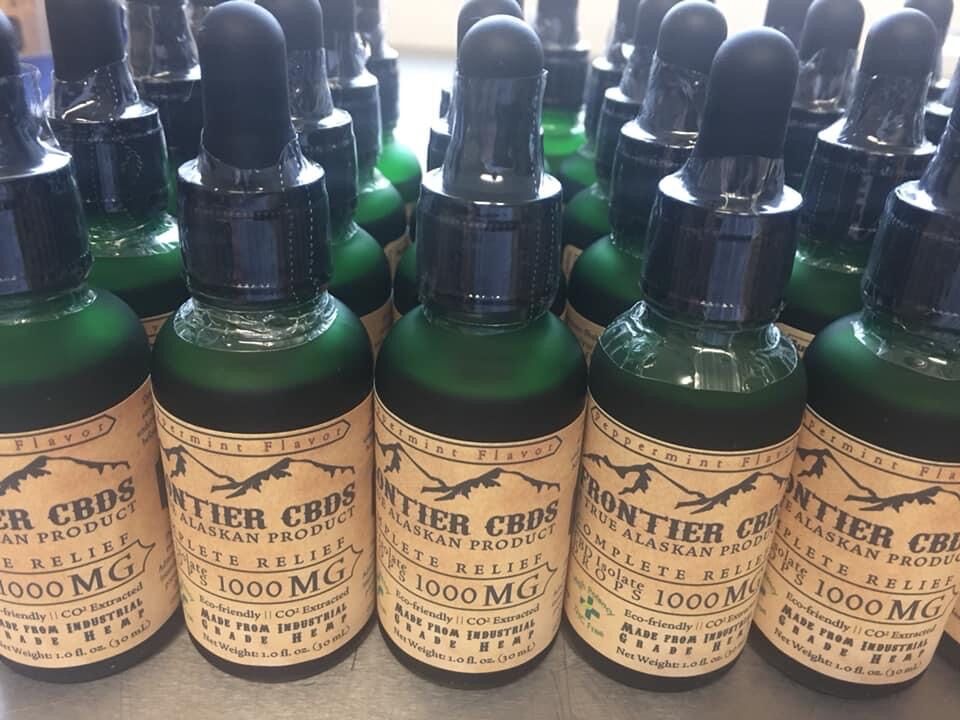 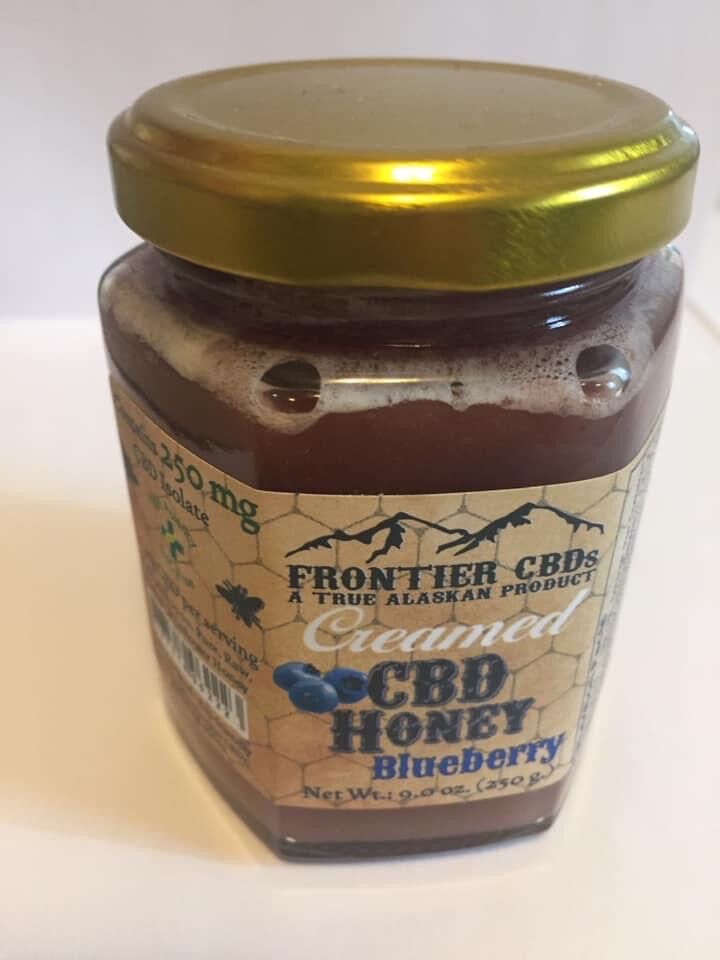 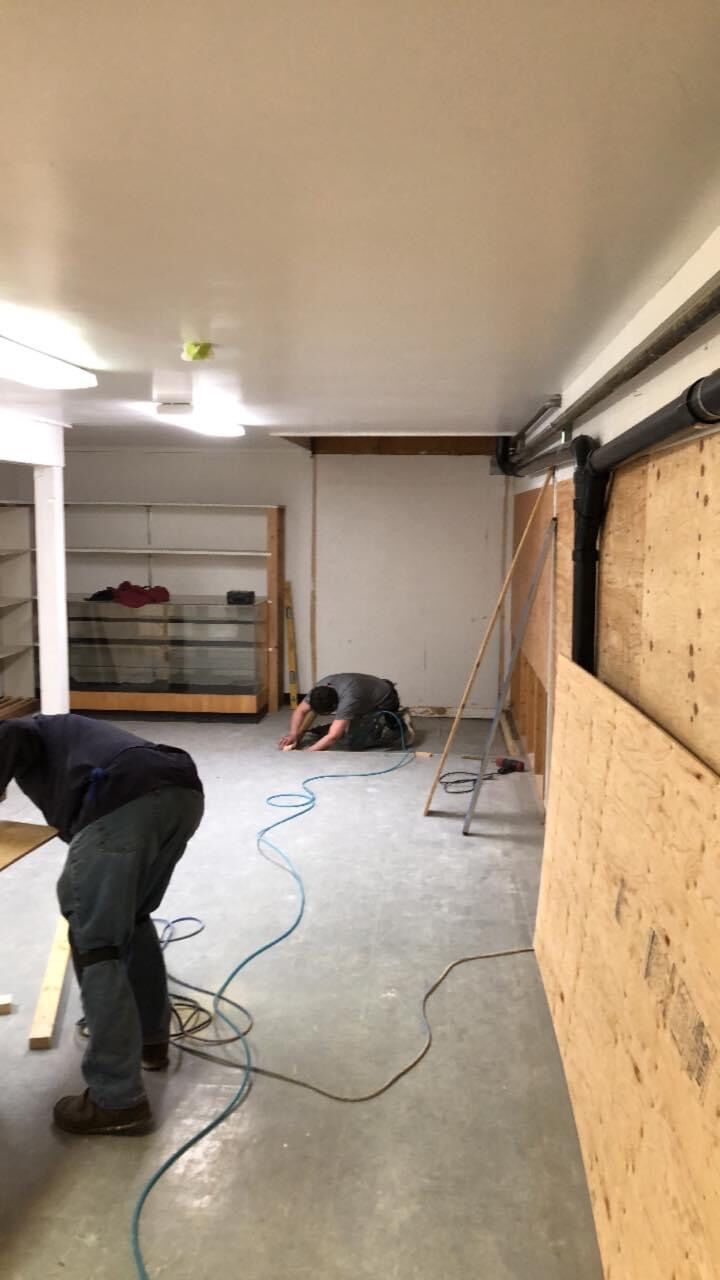 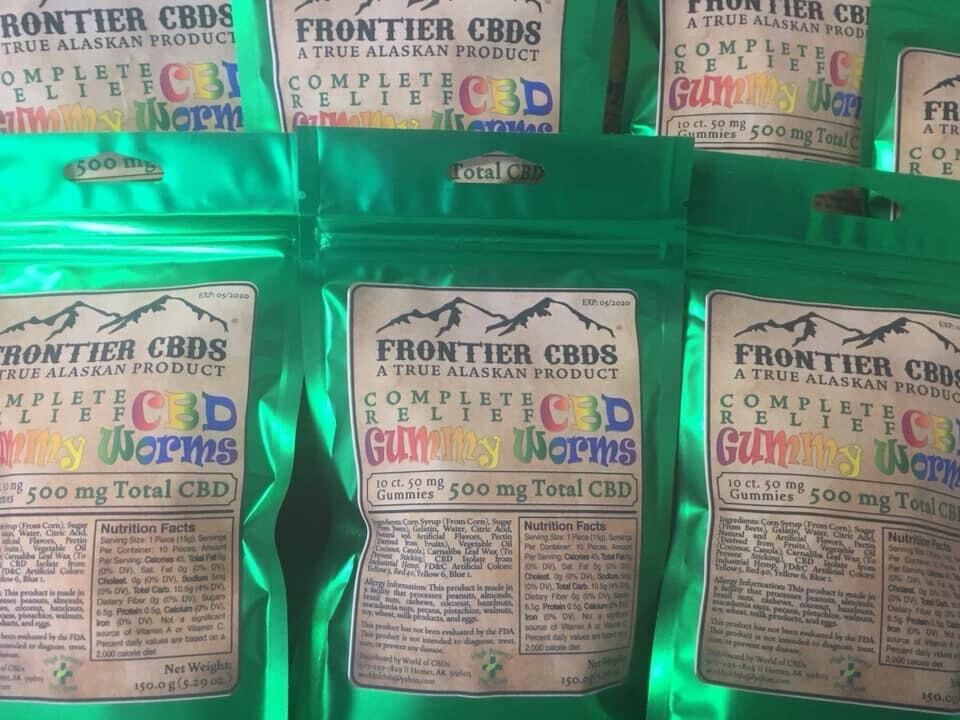 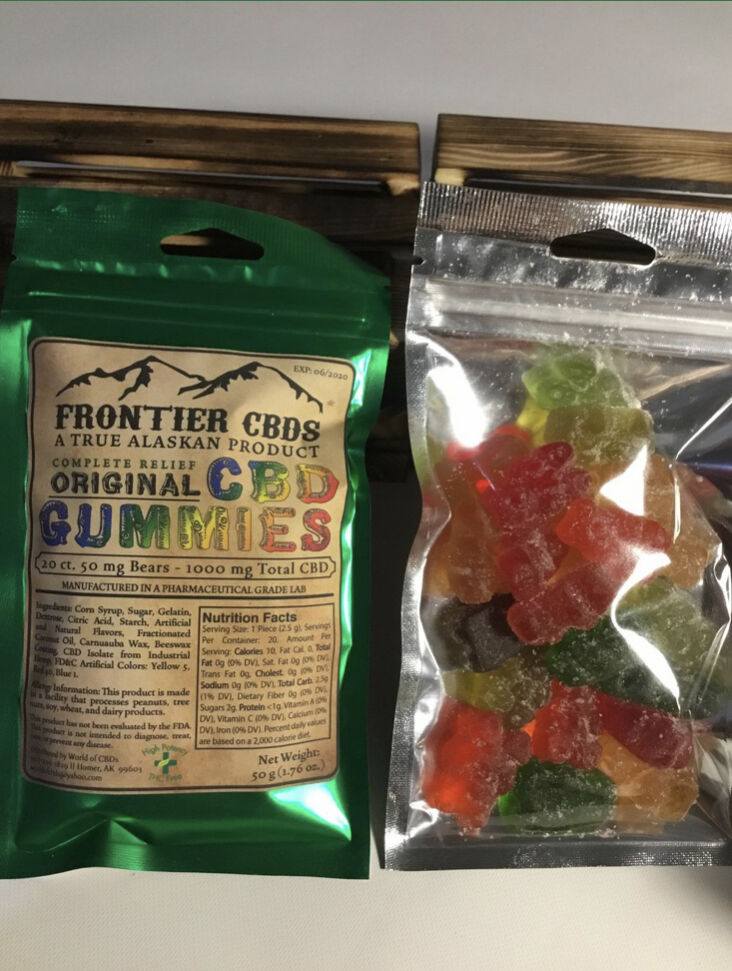 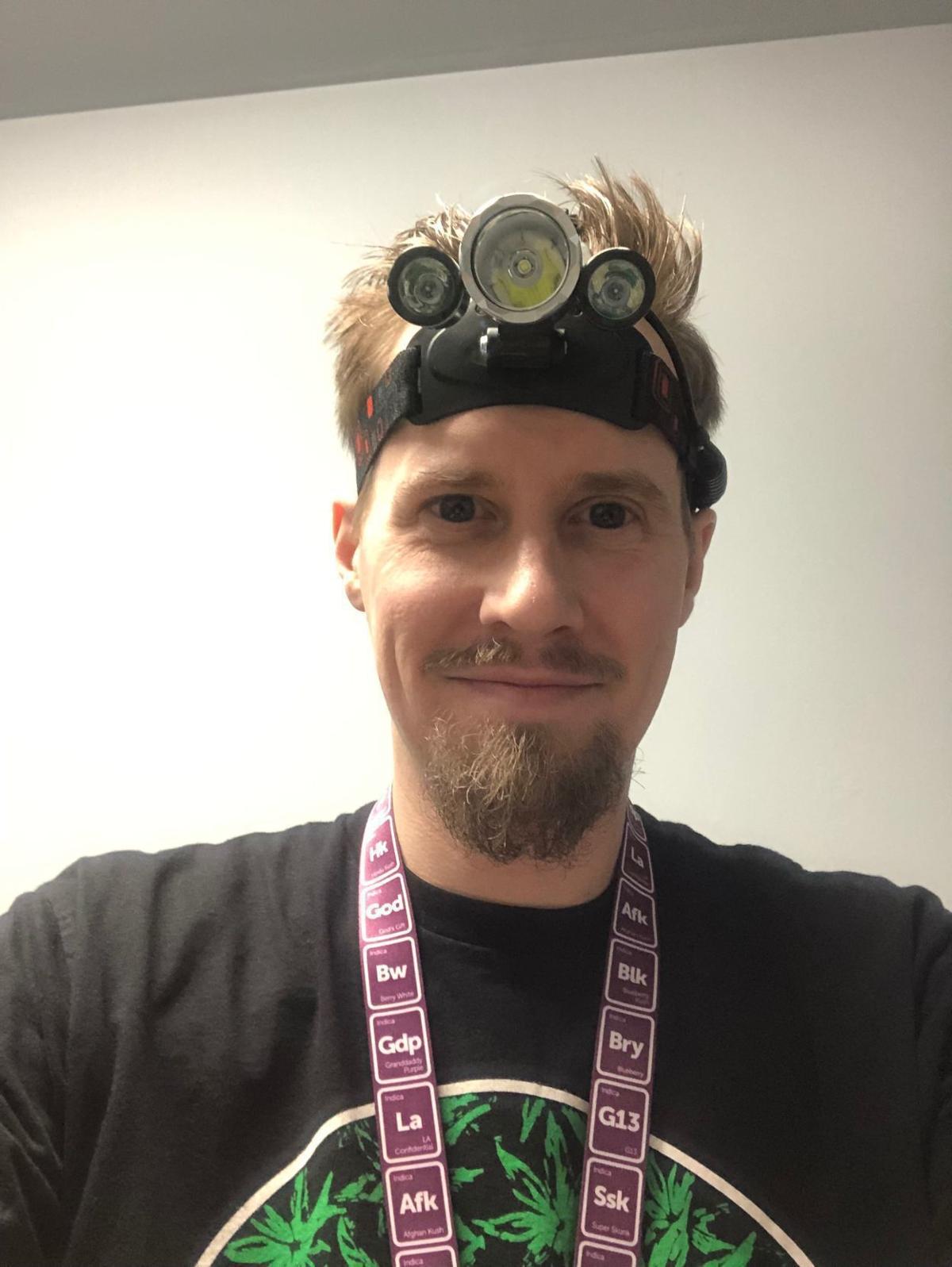 Shawn McDonough is a one-man powerhouse of CBD manufacturing and sales based in Homer. He has been a fixture in the cannabis shops I have worked at, where people know him as “CBD Shawn,” always dropping in with deliveries, usually by himself. I caught up with him over the phone one day during the only time I could catch him, while he was driving down the highway.

It looks like this is a perfect example, you are ridiculously busy, all the time. What does your work week look like?

Oh, I dunno, usually when I’m going full speed I’m doing like seventy to a hundred hours a week, it just depends what’s going on, but I mean, I’m up and down the highway at least once a week, from Homer to Wasilla, and all in between.

How many places are carrying your CBD?

We have seventy-six stores here in the state right now.

And you’re pretty much checking in on them regularly?

Yeah, a lot of em I show up to their shop and inventory what they have and actually take and provide them with an estimate of what they need, and that’s how a lot of my customers order. Some other customers I get emails from, like the ones in Juneau and Ketchikan, and Sitka, and Nome, and all the other cities around the state we ship to.

I’ve seen both the names Frontier CBD’s and World of CBD’s, what is the name of your company?

So World Of CBD’s is like what I sell my national products under, and then I distribute Frontier under that as well. It’s kind of like my group of CBD’s I distribute from the lower 48, like Hemp Bombs, and Green Roads, and some of those other companies that you’ve seen. They’re just under that and I mean, Frontier CBD’s is just the manufacturing part of it, and the brand name.

So the stuff you make yourself is Frontier CBD’s?

Yes, we don’t bring anything up and put a label on it, we actually make everything from scratch down there in Homer.

That’s crazy. And that’s kind of what I wanted to ask you about, you said you’ve got a new lab going on, right?

Oh, the new lab space, we opened up a new 660 square feet of lab space. A lot of smaller CBD companies just have a certified kitchen area, but we put in a clean room, which is above and beyond what’s required to make CBD. So it’s one of those deals that, that we chose to take it to the next level and do a clean room and make it the cleanest environment we can.

I’ve heard that some CBD products are questionable or unsafe, what’s the story with that?

I mean, There’s some CBD products out there that, you know, they don’t live up to what they say is on the package. There’s a lot of leeway with what’s been able to be put on packaging in the past and now they’ve really tightened regulations, from the state level and on the federal level on, what should be written on the packaging. A lot of the companies out there, they don’t really hold true to what they say , the milligrams that’s in a particular product, and, it’s been kind of the wild wild west as far as the industry goes, on the startup of it. At this point in time we’re finally getting a better handle on what’s actually going on in the industry on a daily basis. Some of us are self-policing, our customers, when they take and buy something off the Internet, I can take and show ‘em, maybe why that product is not up to par, and why the state might not approve it here under the new Industrial Hemp Program that the state has rolled out.

So it’s more a transparency thing and not a safety thing?

Yeah, it’s more of transparency than safety. I haven’t seen or heard of any products in a while that have harmed people. There was a company down in Texas that was taking to making some CBD products, and they thought people wanted to get high on them, so they added Spice to it.

Yeah, so there was a smoke shop, vape shop down in Texas, you know, I believe six people might have got arrested off that whole deal. Yeah, they sent about 300 people to the hospital. Obviously, you know what Spice is, a mix of hallucinogenics and everything else. You know, that’s where there’s still people out there, they look at CBD and they think people want to use it to get high, and that’s just, not the case.

As far as safety goes, you know, it’s knowing what you’re getting. The state has taken and evaluated our products and they’re still in the process of going through a lot of different products and what they have taken and chosen to do is approve a particular part of the product which is the isolate we bring in. So we bring in the isolate from out of state right now ‘cause there’s no one producing it here in the state and, we use a product that’s 99.6% pure isolate and, that’s what we take and test with the state to show, that the THC is under the .03% that’s allowed by law. Obviously Frontier CBD’s goes about it a different way, we use THC-free isolate so there are no traces of THC in any of Frontier CBD’s products, and I think that benefits a lot of folks that have to take drug tests for jobs that they don’t want to, obviously, lose for testing positive for THC.

You said you were kicking your lab into high gear and making it as clean as possible. Is cleanliness the main element of a CBD lab, or are there more capabilities to your new lab space?

We expanded a lot, and we’ve been getting a lot of new customers so, we’ve had to find some equipment we could bring in that would take and make the product, obviously in a faster period of time. And that was the idea with the lab, at that time we were going to bring in a bunch of new equipment and make a clean room, and that’s the avenue we moved. Our capabilities now are, we can produce a large quantity of CBD’s, more than the state can handle so, you know, we’re definitely taking a look at other options out there, around the country.

CBD is federally legal and there seems little standing in the way of Shawn moving forward in his expansion.