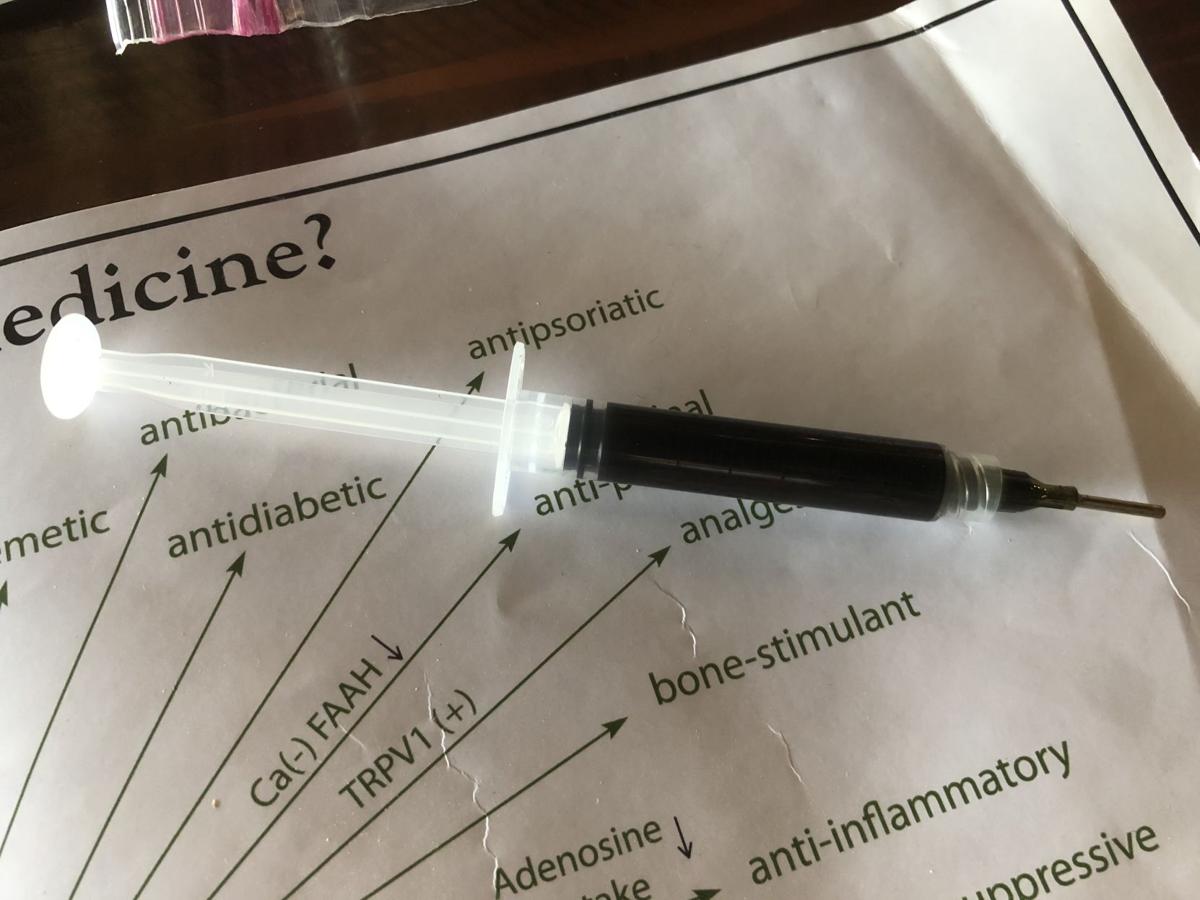 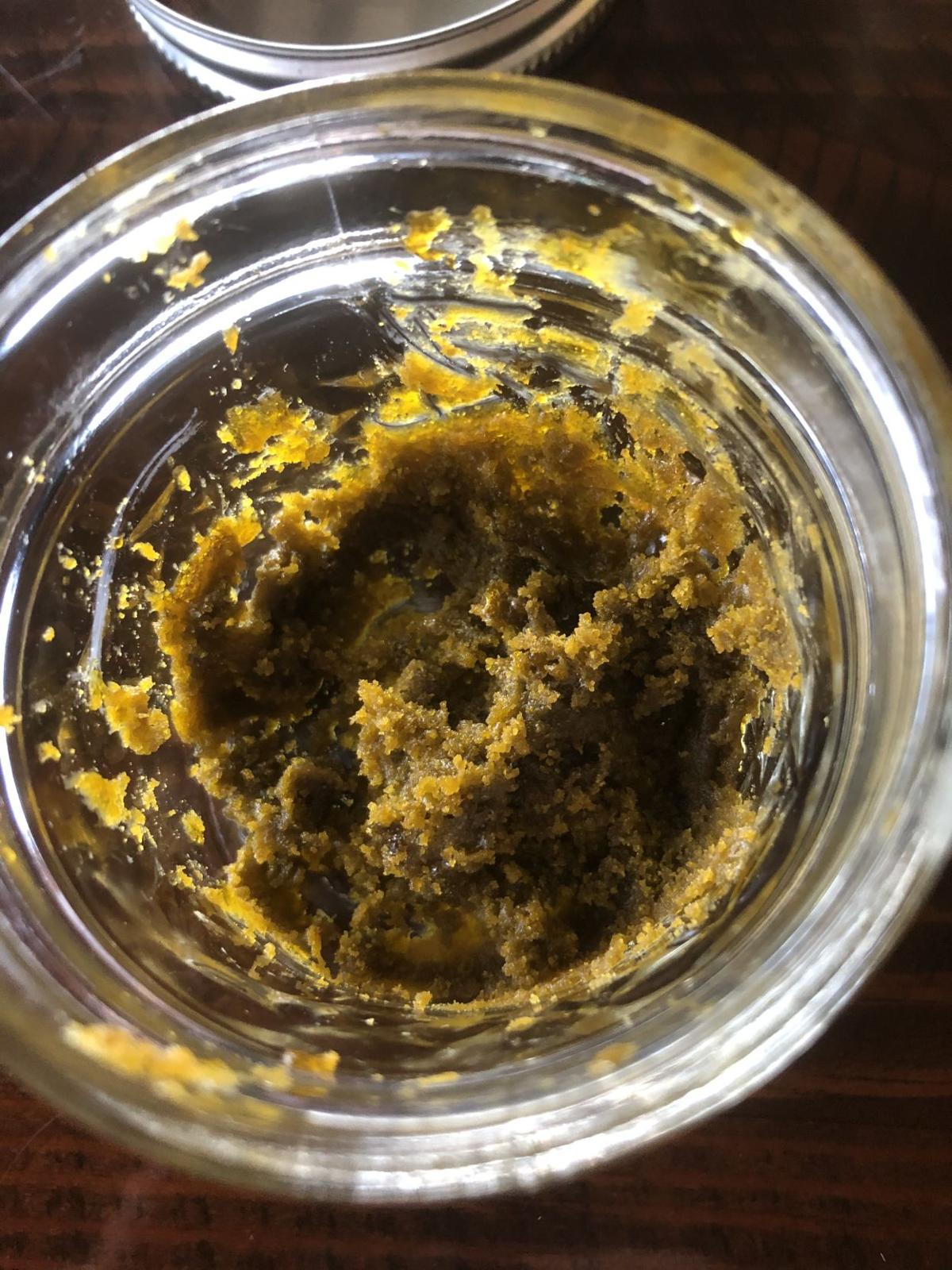 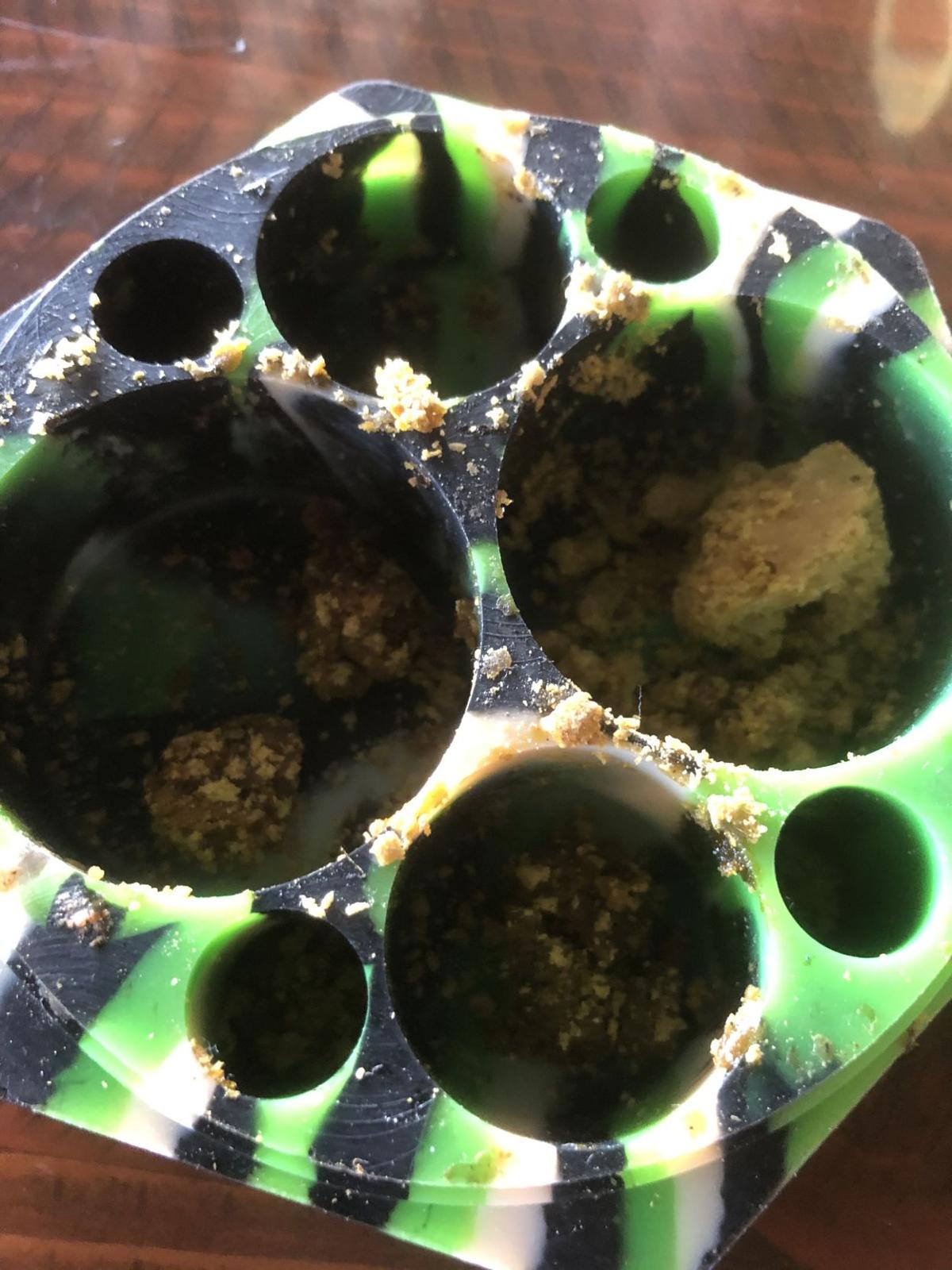 Cancer is everywhere in our society. People ask more and more if cannabis can be used to legitimately fight cancer. Zane Ulin is one person who has. I met with him recently at a cafe and he immediately presented me with a number of jars and a large syringe of indeterminate origin. Before I could ask a question he gave me a jar and said, “This is what you want; this is what cures cancer. This is a full plant extract, you see how dark it is?”

There was a ball at the bottom of the jar, something like cannabinoid Play-Doh. He broke a piece off, a touch yellower than opium. I ate it. Zane explained how the material was something he continued to use in conjunction with CBD, saying, “When you’re fighting cancer, this is what you want, because there’s no cannabinoid left behind.”

I wanted to ask about your experience with cancer and the RSO (Rick Simpson Oil) helping that.

Rick Simpson, his life has been turned upside-down. He’s asked everybody, and out of respect for that man, because he taught me — I learned from him. He’s a master — we call it — FECO: full extract cannabis oil; it’s a more descriptive term. That guy can’t cross town without getting pulled over; he can’t cross borders; he can’t do anything; his life has been ruined.

You were given a terminal cancer diagnosis, correct?

Correct, I am number four, just like the movie, with this kind of cancer. Every other one of them died within thirty days. And other people that have had the rare aspect of my non-Hodgkins lymphoma, no one’s lasted more than a year. About a month ago, I just got my five-year cancer-free diagnosis and I am officially a survivor; like, I’m the only one in the world; the only one that survived.

And how did you end up taking the oil?

(Laughs) I put it in capsules and swallowed it like there was no tomorrow. I took some of my best Denali flower and I don’t know why I got so lucky, it was like hitting the lottery twice, I just happened to be growing the best strain for my type of cancer. I had a lot, that I had turned into oil, had a jar like this full, and started eating it like there was no tomorrow. And in two months, I had 80 percent remission, and they consider remission to be 20 percent tumor reduction. I had unheard of numbers in two months. In about four months I was entirely cancer free — unheard of. I still continued on the chemo, and I even went ahead and did a stem cell transplant as well, down at the University of Washington but, I did that prophylactically — just to fight harder to make sure it didn’t come back, and I was able to donate my own stem cells because my body was cancer free. Nobody else in the world has been able to do that — no one.

Had you been taking the oil for that purpose, because you believed it would help you?

Yes. I won’t mention names but there was a famous smuggler up here — and if you’re famous you’re doing it wrong — but, very well-known. His stepdaughter was a good friend of mine. Her mom, one time — I was a caregiver for one of my best friends already — she put six or eight cannatabs in my hand and said, ‘give this to your friend; this cures cancer,’ and I thought she was full of shit. I was like, ‘yeah right, cotton candy’s good for the flu,’ you know, I didn’t believe her. I was the one that was totally wrong. I went home and started doing my own research that set me on a path — it changed my life. It set me on the right path, it set me on the right path about homeopathic medicines.

How do you know it’s the cannabis that cured your cancer?

I don’t. I don’t know that it’s not the chemo. That being said, the chemo never helped anybody with my issues. And I have a good friend who’s a neuroscientist, at Temple (University), Sara Ward. She lectures around the world; she’s amazing. She’s one of three hundred people who get CBD and THC from the DEA to do research. She’s super highly respected. I asked her that question and she told me that the cannabis oil and the chemo work better in conjunction than either one of them individually. A lot of people are afraid to do the chemo. That being said, I took the hardest chemo in the world, I threw up two different days. Total. After a year of chemo, two days of throwing up. I worked, I was contracting when I was sick, I was doing what they said shouldn’t be done. I was supposed to be in a hospital bed and I was up on a mountain in the snow putting a roof on. I mean I wasn’t doing a lot, I was directing my crew, I was pointing my finger mostly, but I was doing what they said could never be done.

So you feel like cannabis helped manage the chemo?

It remediated ninety percent of the issues. I still felt terrible, some days I could only work three hours but I was working, I was vital; I was doing what nobody else could.

More than what was expected by far.

What do doctors say about your survival with cannabis?

Lots. Ninety percent of ‘em are on board and absolutely, they can’t argue with results. They’ve seen the results. Those of them that have actually taken the time to get outside of Pfizer’s book, and Pfizer donates a new wing to every medical school every five years they help write the textbooks, and they’re [doctors] trained from it. It’s not their fault they’ve been trained for so long, so well, in one direction they don’t see outside of that box.

There’s probably a lot of arguing to be done about this topic. Zane’s primary argument for the benefits of cannabis is getting up in the morning. Navigating cancer is exceedingly difficult and Zane seeks to be a knowledgeable, experienced resource for those with a positive cancer diagnosis.

He can be reached at zaneln@yahoo.com.