137 COVID cases in Alaska on Thursday 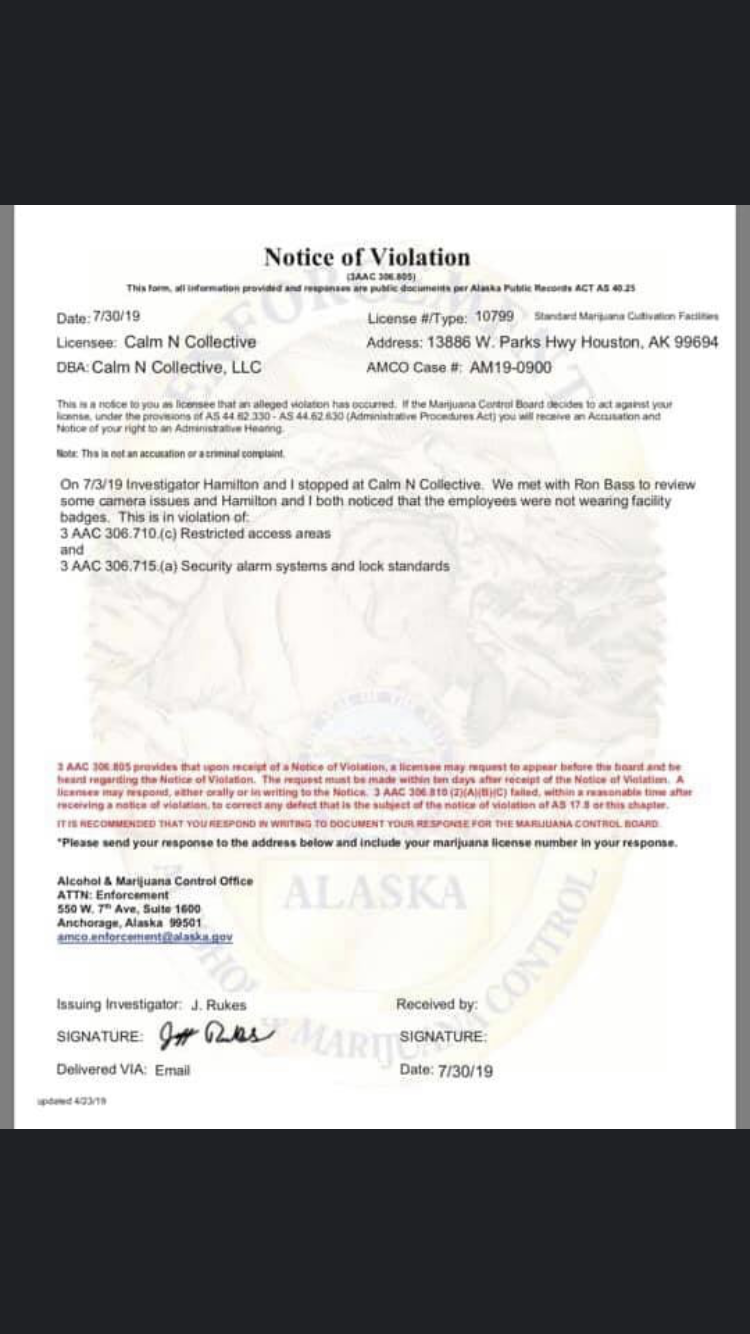 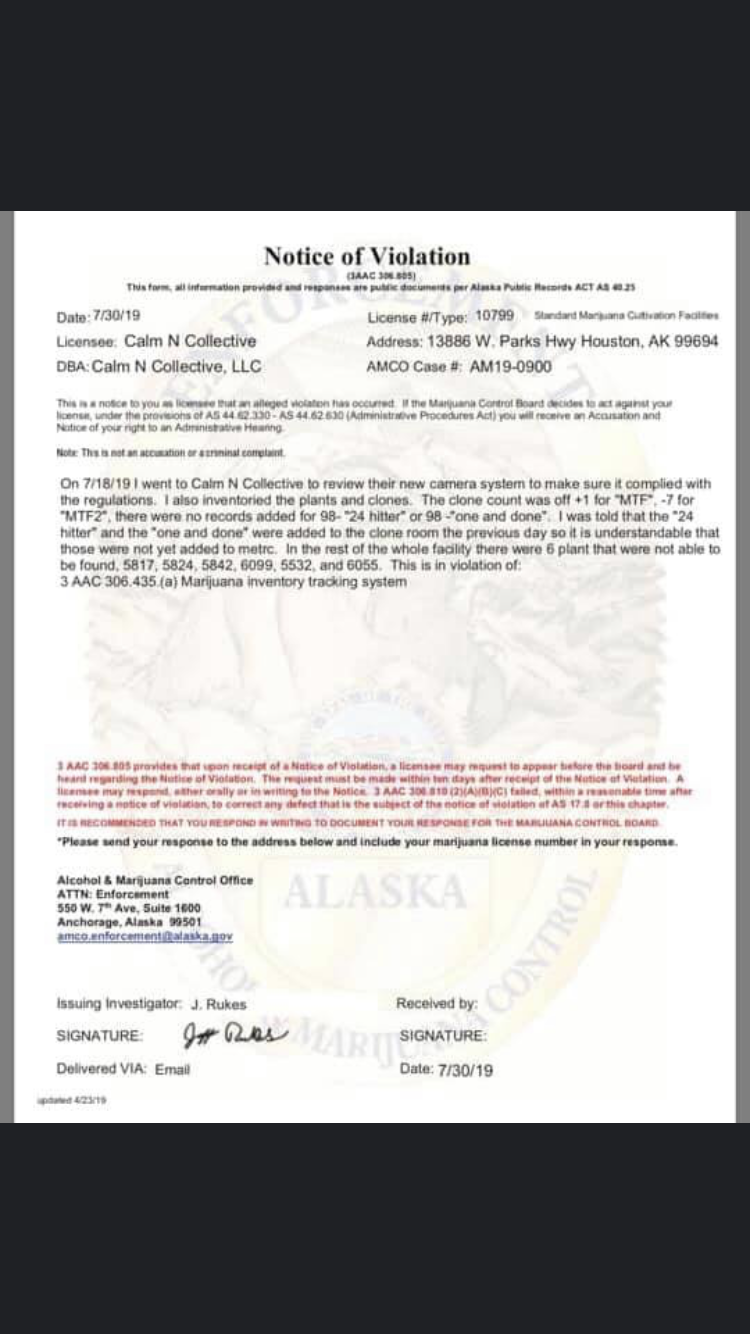 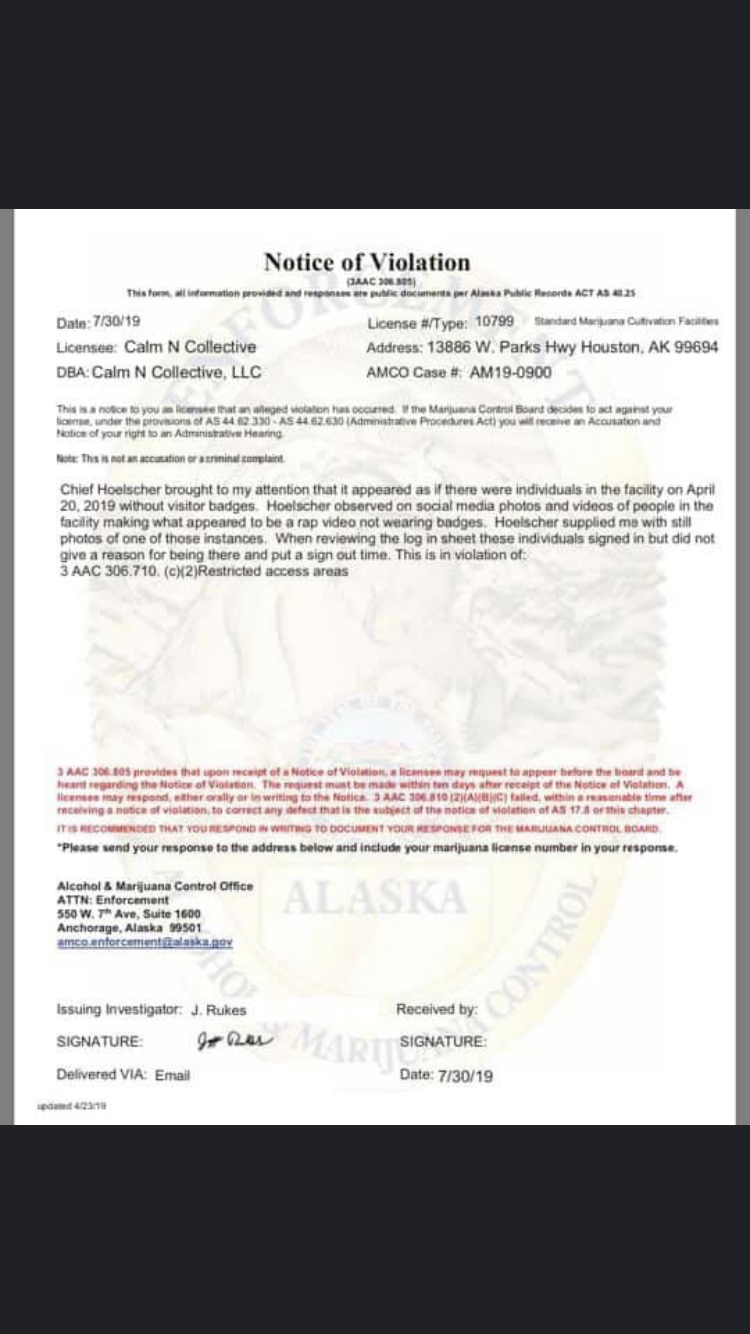 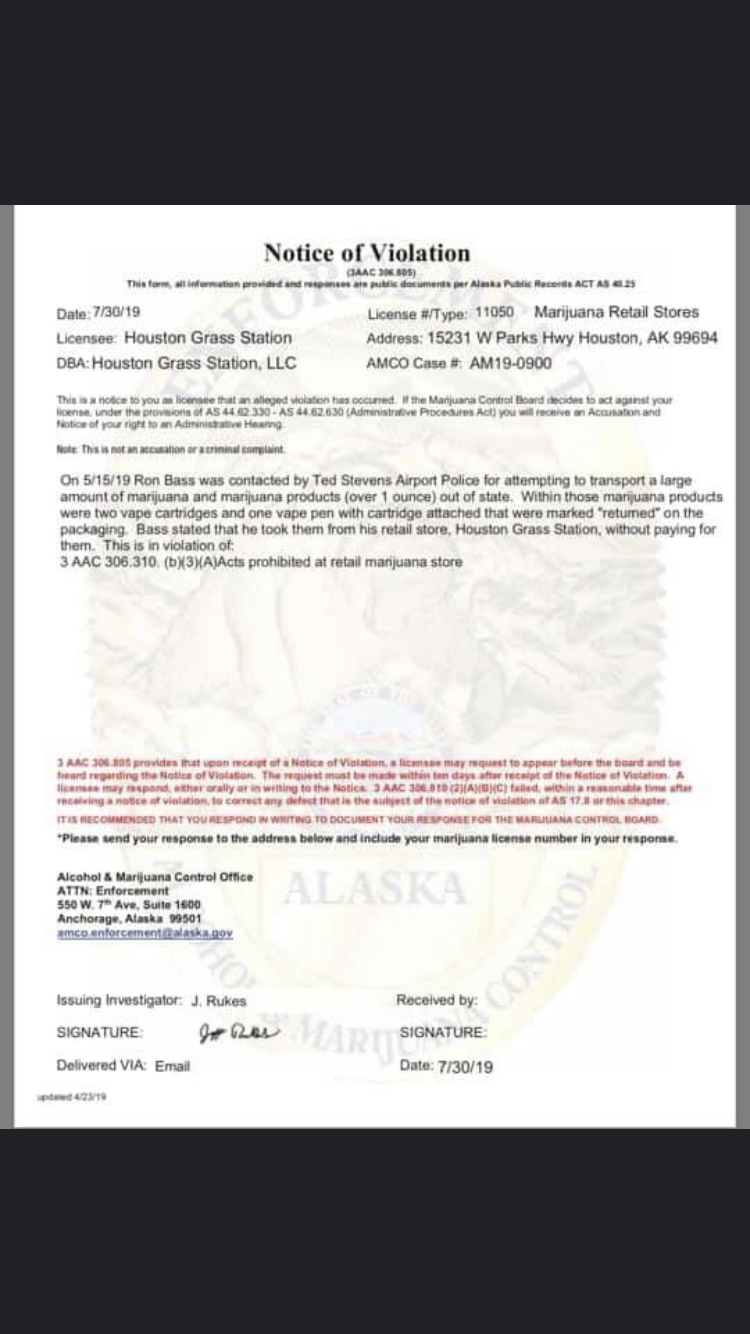 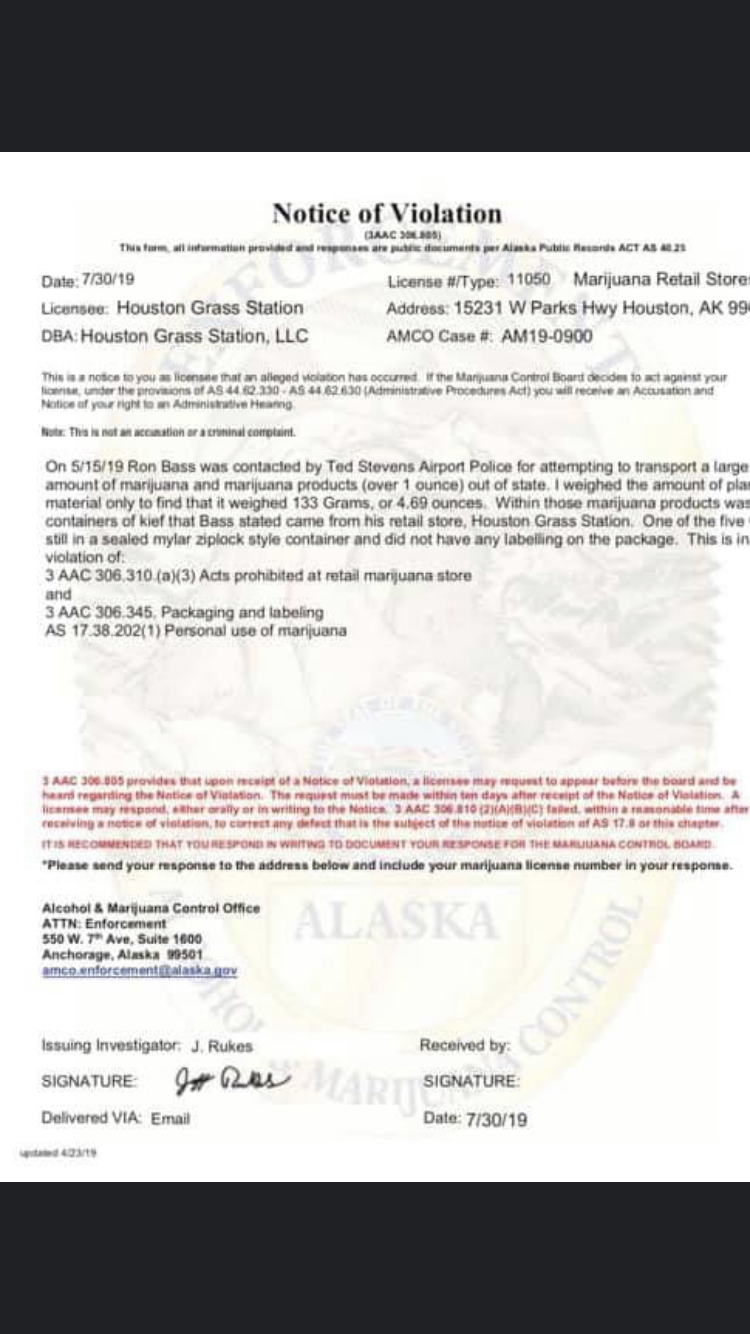 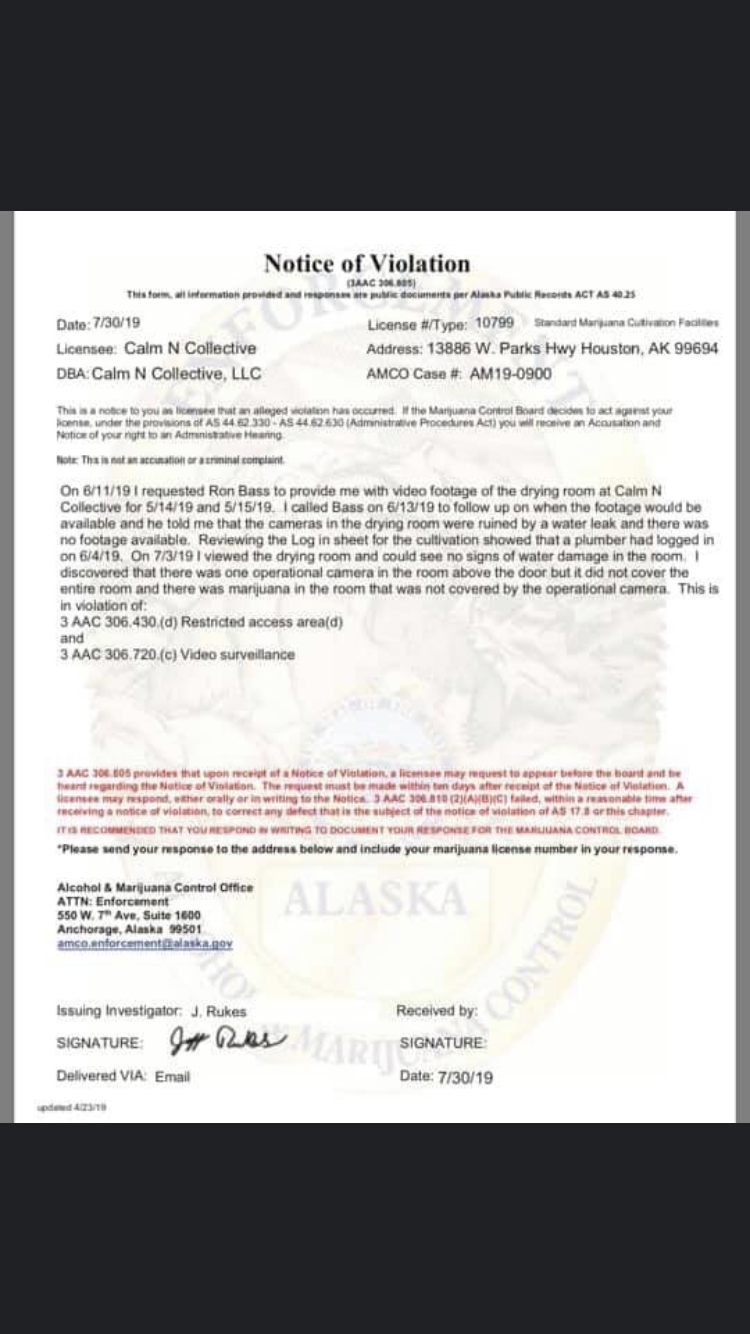 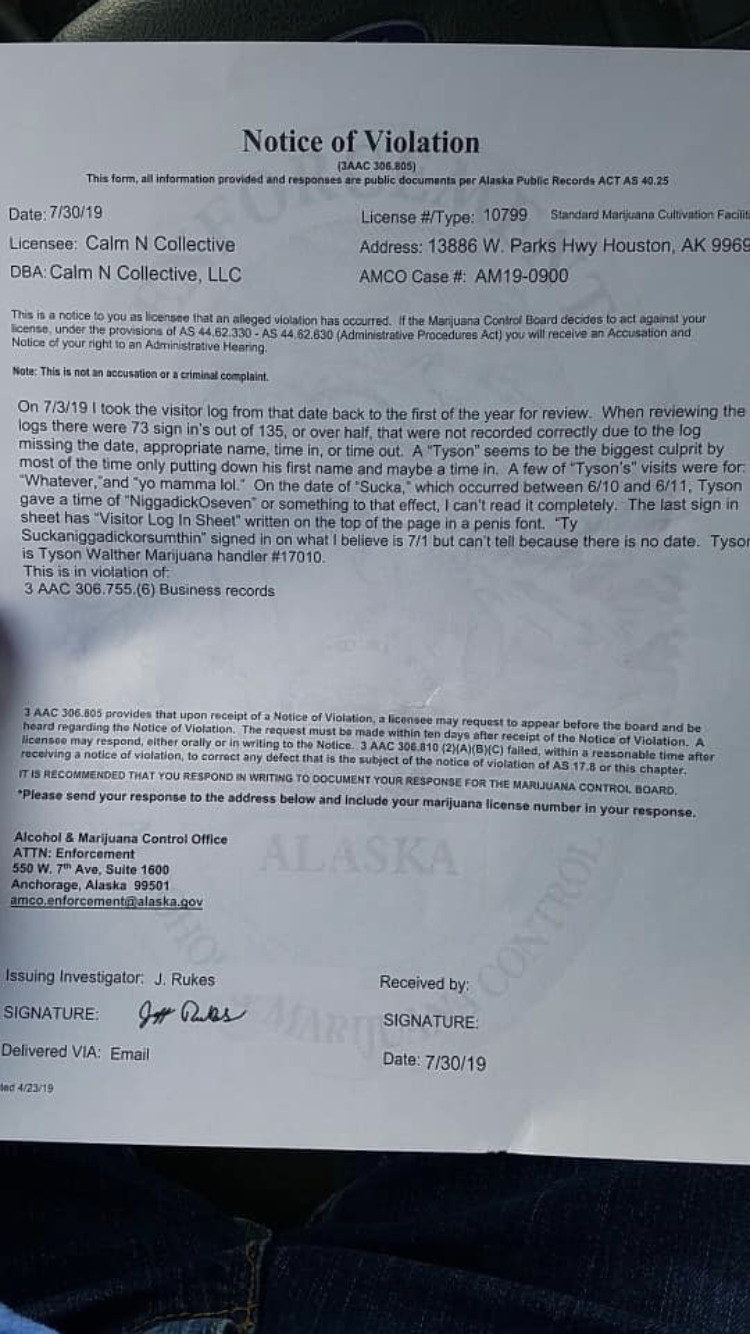 On November 1, AMCO issued an advisory notice to all Licensees, informing the public that “all packages that originated from Calm N Collective have been placed on administrative hold. If you have any affected product in your inventory, it must be immediately removed from your shelves and placed in quarantine.”

The notice went on to state that “AMCO and the Department of Environmental Conservation Pesticide Control Program are conducting an investigation. AMCO took this action under 3 AAC 306.30 because we have received credible information that the licensee used one or more pesticides on marijuana grown in this facility that pose a threat to human health. Specifically, the licensee is alleged to have used Eagle 20, a pesticide containing myclobutanil, which is stable at room temperature but releases a toxic gas (hydrogen cyanide) when combusted.”

Store owners were required to pull any product that had been made using Calm N Collective material, which meant the new distillate cartridges by Refine (produced by X-tracted Laboratories) were also pulled from the shelves, as well as their newest product, “Double Dippers,” a combo of distillate and concentrate. Many Alaska Cannabis consumers had been anxiously awaiting the release of Refine cartridges, which just hit the market a couple weeks ago. While the distillate may only contain small amounts of the Calm N Collective material, all product was pulled due to safety concerns.

Ron Bass, owner of Calm N Collective, recently received several NOV’s (Notice Of Violation) for allegedly not providing the proper video footage of the drying room at the Calm N Collective facility, claiming that the cameras were damaged by a water leak.

It was later revealed that the “water leak” was revealed as potentially much more than that, when a former employee came forward and revealed that water leak was actually a sewage leak, caused by clogged lines.

Nick Callahan worked for Ron for about two years. “Ron and I got into it for several things. Mostly him refusing to make any changes to get rid of the PM (powdery mildew) or any of the other problems, other than to throw more sprays and such at the problems,” Callahan said. “We needed a full reset, clean up, and proper sterilization of equipment such as an agriair, and leaks in the building fixed to get rid of the black mold, etc. He always promised to make these things happen if we made him enough money, but no amount of money was ever good enough, I guess.”

While the PM was certainly a problem, an even bigger concern was the ‘poop incident,’ which occurred when a 6-inch ABS line that starts in the upstairs and runs the length of the grow, became clogged and full. When it built up enough back pressure it blew both of the hoses from the AC units off and sprayed out.

“It covered almost everything within a good 8 feet of the wall, but the worst part was it happened on a weekend when nobody was there and filled the oxy pot controllers all along that wall with sewage. They fed several times on sewage. All plants were cut down over the following month, then trimmed and sold,” Callahan said.

Callahan says he came forward after realizing he hadn’t signed an NDA.

“Ron and I got into it over the poison and he came to me, demanding I sign an actual NDA, and I refused. He let me go.”

Callahan says he was aware of the pesticide use. “He tried to make me spray it. I wouldn’t, so he hired helpers who would. He used those kinds of chemicals before I got there (Eagle 20) We disposed of them and used better alternatives and did very well, not this Summer but the Summer before. We all made it very clear that in order to maintain the clean environment over the Winter we would need the proper equipment or the lack of air circulation and spike in humidity would bring the issues back. He never came through, and when the PM came back, so did his spray.”

Bass also was known to set off cases of bug bombs to deal with pests, Callahan said, some of which had negative effects on the plants.

Eagle 20 is a fungicidal pesticide, approved for use in a wide range of edible agricultural products, such as grapes, apples, and spinach. When properly used, it has a low levels of toxicity in humans. Eagle 20 is not approved for use on smokable products. While Eagle 20 (myclobutanil) is stable at room temperature, it releases highly toxic gas if heated past its boiling point of 401 degrees Fahrenheit.

Although all products on the legal Alaskan Cannabis market are supposed to be tested for potency, none are tested for pesticides. The state does not require testing for most molds or residual pesticides, which has resulted in concern for many consumers and cultivators. Until the regulations are changed, consumers are at a higher risk of buying and consuming tainted product.

In his defense, Bass made a Facebook post after the AMCO advisory notice went out, stating, “As some of you may know our products have been suspended as a result of allegations made by a disgruntled previous employee. This employee knew he was being fired and took steps to damage the company on his way out.”

Ron received several NOV’s recently, after an AMCO investigation revealed several issues, such as not having guests sign in/out of the cultivation, not having employees wear a proper facility identification badge, not having the proper video coverage of the grow, having marijuana in a room without video coverage, attempting to transport large amounts of marijuana out of state through Ted Stevens International Airport, having an improper clone count and having missing plants in the grow, according to AMCO documents.