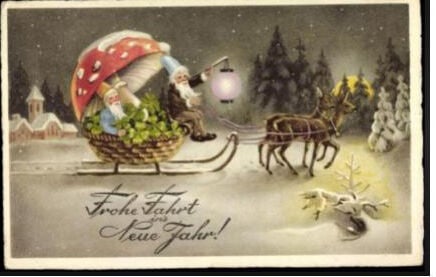 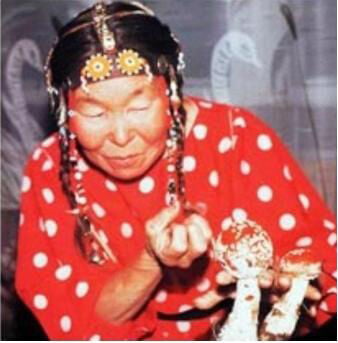 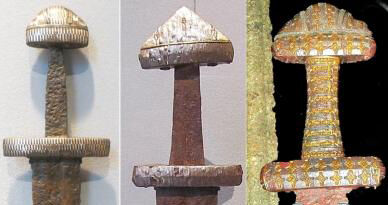 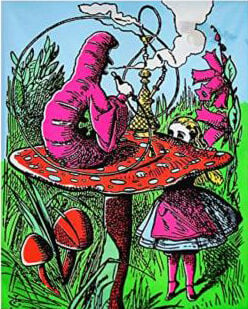 There are a number of entheogenic plants and fungi living right here among us in Alaska.  I’ve heard reports of foragers and ‘voyagers’ alike finding psilocybin, panaeolus, Phellinus igniarius and a variety of other entheogens that have been used here since time immemorial.  There is one spectacular and oft misunderstood ancient hallucinogen growing in most of our backyards.  It is completely legal in the U.S. to eat, drink or smoke.  You’ve also seen them in literature, movies, and video games -  the mysterious Amanita muscaria, aka Fly Agaric.

Muscaria is one of humanity’s oldest-known and widely-distributed entheogens. Remains of a woman buried 19,000 years ago in Spain revealed spores of Amanita muscaria in her tooth plaque.  This revered fungi is portrayed in ancient cave paintings as well as early religious artwork. Gordon Wasson believed it to be the main ingredient in the ancient drink Soma; the divine beverage of Vedic and Hindu tradition. This mushroom has been with us forever, yet we seem to have lost much of the knowledge.

Also similar to Alice’s dream experience, users of the mushroom say that it can put you into a drowsy, dream-like state; with lucid out-of-body experience.  You continue to trip while sleeping.  I'm interested to know if muscaria was on Lewis Carroll’s psychedelic menu at some point. Just the name alone strikes fear into mycophobes worldwide. The Amanitaceae family of mushrooms contain some of the deadliest known fungi on earth. The term muscaria derives from the latin ‘musca’ pertaining to flies or flying. Named potentially because it has been used for years, soaked in milk, to attract and kill flies;  or, perhaps named so because they help you have visions of flight; one of the effects of muscaria. It is said that Siberian shamans would use muscaria to mentally ‘fly’ to other levels of reality to visit the ancestors to get healing guidance. Not only do you fly under its influence, but you may see other things fly as well. Like maybe, reindeer…?  As far as the Amanita muscaria being deadly, the North American Mycological  Association reports, ”no reliably documented cases of death from toxins in the mushrooms in the past 100 years.”

In Viking warfare, berserkers acted as a special-unit force. Under the influence of alcohol and a strong muscaria soup, they would ferociously charge into combat; without their traditional armor - stark naked in a collective hypnotic trance, called a berserkergang.  A psychological weapon that would terrorize their opponent, along with bright purple faces and foaming at the mouth; both noted side effects of muscaria. In this frenzied state, berserkers were said to transform into spirit animals undergoing tremendous physical transformation; exhibiting super-human strength and agility. Another side effect of muscaria that most certainly aided the berserkers in battle is repetitive motion syndrome.  A valuable attribute as they would step-and-slash, plowing through their opponents.  Preventing them from feeling pain until after the battle. However, this attribute is probably not so beneficial when muscaria is used as a recreational hallucinogen.  Paul Stamets, noted mycologist, tells of an Amanita-induced trip that started out peacefully in nature, but as the trip gained in intensity, he found himself walking through a campground repeatedly dropping his rolleiflex camera, uttering “Dave!  Did I drop my camera?” Stamets would take another step, pick it up and do it again.  This went on for an hour or so while the ‘Winnebego people’ watched on in wonder and took photos.

“The first and usual sign is the shaking of extremities, as if in a fever; they are subject to various visions, terrifying or felicitous, depending on temperament; owing to which some jump, some dance, others cry and suffer great terrors, while some might deem a small crack to be as wide as a door and a tub of water as deep as the sea. But this is only in those that overindulge, while those that use a small quantity experience a feeling of extraordinary lightness, joy, courage, and a sense of energetic wellbeing,” he wrote.

Muscaria play an important role in Sami and Siberian cultures. The shaman would eat or drink the muscaria; entering into a trance as his/her body filters out the toxins. The shaman then urinates and the followers would then drink the psychotropic urine.  It is said that urine is the safest way to ingest muscaria as the pass through the body removes the toxins while retaining the more desired entheogenic properties. Does Santa Claus have shamanic origins?

Shamans would pick the sacred mushrooms while dressed in red robes, lined with white fur and adorned with white spots, to pay honor to the Amanita as they picked them. They grow bright red beneath evergreens like beautiful presents.  Amanita have a mycorrhizal relationship with these evergreens; a symbiotic relationship between the fungi and the tree’s roots, exchanging nutrients for dextrose.

The shaman would then hang these mushrooms to dry in evergreen trees, adorning the tree like beautiful ornaments. Drying these poisonous fungi safely reduces the toxicity while increasing the potency. On Winter Solstice the shaman would fill his/her bag full of the dried ‘gifts’ and head out to deliver them to the community. Often times, the snow being so deep in these northern communities that the shaman had to deliver their stocking full of muscaria through the smokehole in the roof.  These gifts of introspection were highly appreciated and they would leave food behind as a reward for the shaman; as we do with milk and cookies today. Reindeer, aka Caribou, also love muscaria. They seek out and eat them fresh as they graze; displaying the euphoric effects of the mushroom as they jump around. They may even appear to take flight if you, yourself, is also under the influence. Reindeer can smell the muscimol in the urine of their herders and have been known to knock them over as they urinate; in order to get to the urine. Reindeer urine is also collected after they ingest muscaria for a similar psychotropic effect as if passed through a shaman.

Graham Hancock objects to our society’s Coca-Cola view of Santa Claus and commercialization of Christmas stating that it is  “another example of the way our culture takes an ancient historical truth and completely castrates it and turns it into Santa Claus. Whereas what we are really dealing with are profound experiences in deeply altered states of consciousness.”

Amanita muscaria as a psychedelic

Though not in the same classification of psychedelic as psilocybin, ayahuasca, or lysergic acid; experienced high-dose muscaria users tell of very intense hallucinogenic trips, but quite different than the classic psychedelics. Many find it quite unpleasant and they don’t recommend it for random recreational use; making set and setting especially important when considering this entheogen.  Reports of user’s experiences, both physical and spiritual, seem to vary widely; from holy to horrific and from restful to wretched.

The psychoactive compounds within the muscaria are the alkaloids; muscimol and ibotenic acid, with trace amounts of muscarine. Potency varies widely within each mushroom; making dosages only estimates and experiences wildly unpredictable.  Drying tends to make them more potent and safer to eat as proper drying process helps convert much of the more toxic, ibotenic acid into the safer and ‘trippier’ muscimol.

Whereas psilocybin and ayahuasca target the serotonin neurotransmitters within our brain, muscaria targets the GABA🇦 receptor; the main inhibitory neurotransmitter in the brain.  The same region that is affected by alcohol, Ambien, Xanax, and Valium. Muscaria produces sedative, depressant, and hallucinogenic activity.  It has also been found to possess pain relieving properties.  Recent studies show promise in treating conditions such as sleeping disorders, epilepsy, schizophrenia, and Parkinson’s disease.

Traditional benzodiazepine hypnotics (such as the aforementioned Valium and Xanax) suppress the REM sleep cycle.  Muscimol has been found to leave REM sleep undisturbed, lengthening the duration of slow-wave sleep; a dreamful stage of non-REM sleep, considered important for memory consolidation and feelings of restfulness.

Users find that muscaria in low doses can bring about a very relaxed state; many citing the most restorative and regenerative sleep of their lives.   Take a little bit too much muscaria and you may find yourself in a delirious drunken stupor with loss of motor skills for up to 24 hours. Did I forget to mention liver damage…?

As far as being a recreational hallucinogen, reports seem pretty mixed. Not so sure that I am currently game for a high-dose trip, but I do see the potential benefits when properly microdosing dried muscaria caps. The beauty of microdosing is that the effects are small and if the effects are negative then simply stop taking. As with any substance we put into our body, research and precautions should be taken first. These mushrooms have an amazing ability to heal us and teach us, but can quickly take you out if misused; a bit of a myco-russian roulette.

Nature has provided a medical treasure chest for us. What fascinates me so much is how a fungi like muscaria serves a different purpose in the brain than does psilocybin; than does lion’s mane.   These diverse fungi heal us through different methods and seem to know more how to heal us than we do.