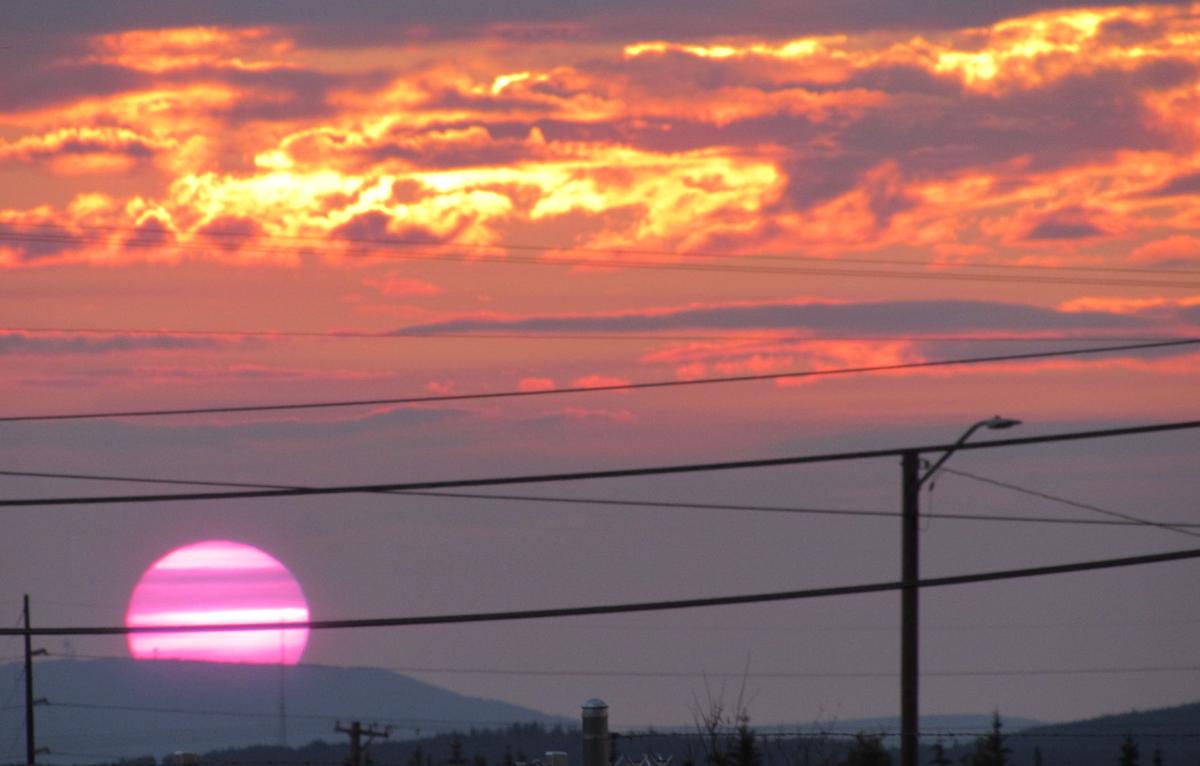 Sunrise over South Fairbanks came at 3:10 a.m. on a recent June morning. 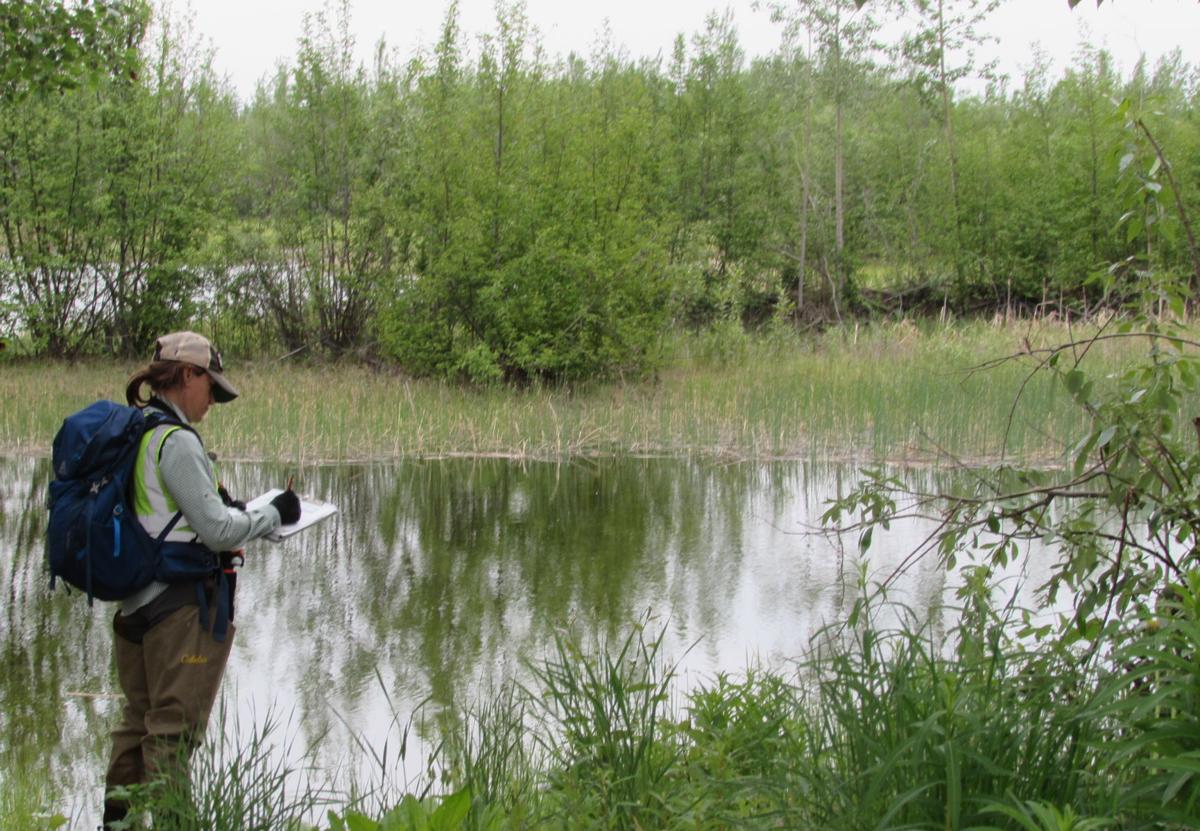 Biologist Kristen Rozell does a bird survey in Fairbanks on an early morning in June. Photos by Ned Rozell. 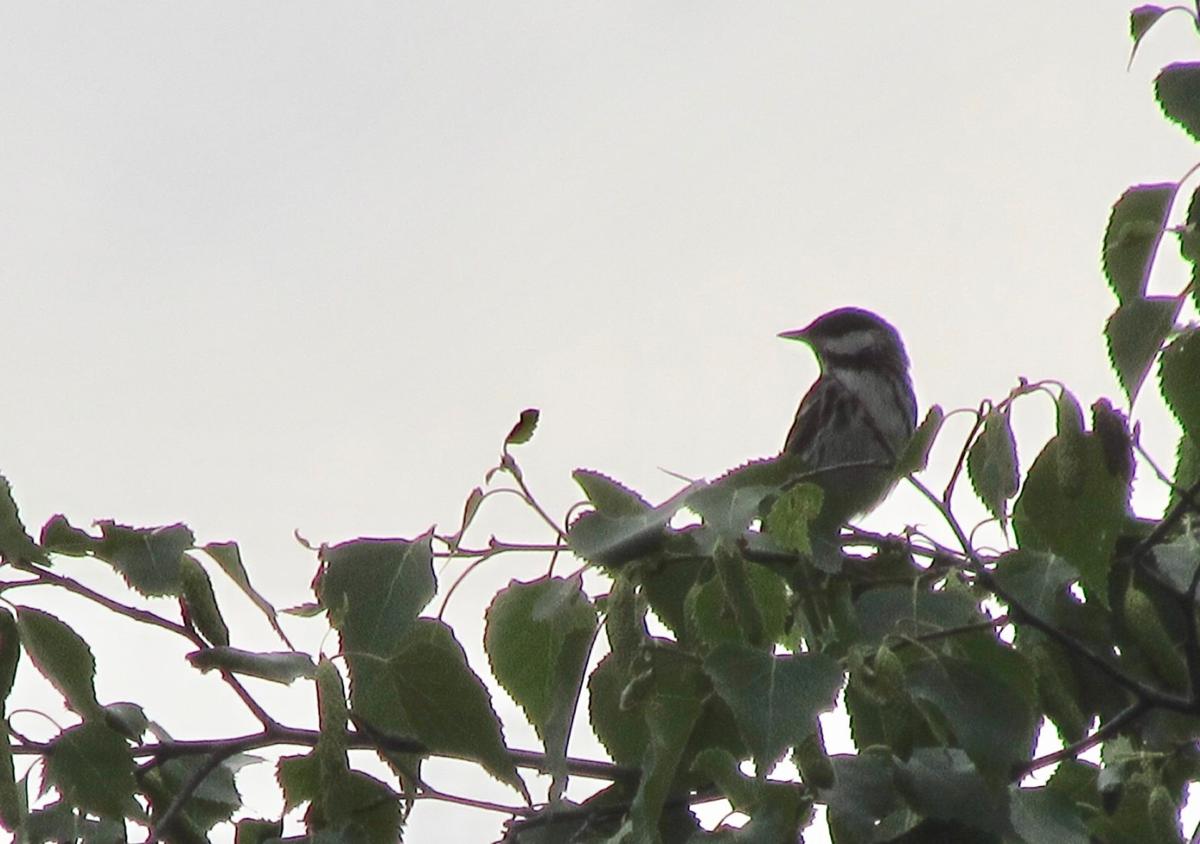 A blackpoll warbler singing from a treetop in South Fairbanks.

Sunrise over South Fairbanks came at 3:10 a.m. on a recent June morning.

Biologist Kristen Rozell does a bird survey in Fairbanks on an early morning in June. Photos by Ned Rozell.

A blackpoll warbler singing from a treetop in South Fairbanks.

Just after 3 a.m., over this city built near the confluence of two rivers, the sun rose with the color of an orange Creamsicle.

I watched this sunrise with my wife, who is a bird biologist. She needed to do point counts along the route of a proposed new road through the flat country near the larger river. She invited me to go with her.

In doing point counts, she stands in one place for a bit and writes down each bird species she sees or hears. Mostly, she scribbles down the latter, as male songbirds are making their presence known by singing. The birds are hard to see because of new, green leaves, and because they are so small.

Kristen had me along for a bit of help and for a feeling of security, as the area by the Tanana River dike has a sketchy reputation. It’s somewhat close to the city center, but far enough that most people don’t travel there.

After pavement dropped off to gravel, we passed random piles of garbage, a pickup with a blue tarp covering it and probably somebody sleeping inside, and a few scorched frames of abandoned vehicles.

Nearing 4 a.m., we saw a few moving cars, rattling over the dusty gravel pile that helps prevent the Tanana River from encroaching on Fairbanks. The men driving them did not appear to be birdwatching.

As we reached Kristen’s study spot and stepped out of the car, most residents of the city of 100,000 just north of us were still asleep.

Outside, we were suddenly awash in bird song, and, soon, the whine of many mosquitoes. It was early June, their time to shine, and we would be tramping through perfect mosquito habitat, swamp and thick vegetation.

We geared up with hip boots, long-sleeve shirts and headnets. It was a little past 4 a.m. when I pulled my net over a baseball cap and followed Kristen into the tamarack woods. We squished on wet ground past a fenced-in auto-body shop with four security cameras, each pointed in a different direction.

As we moved, I thought about how getting up at 3 a.m. would have been near-impossible six months ago, when the heatless sun would not make an appearance for another seven hours.

Getting up is much easier now, in this time of round-the-clock light. I looked at this bird-work as my chance to stay up all night, a yearly solstice tradition. I cheated this year, though, banking a few hours of sleep the night before.

In South Fairbanks near a northward curve of the braided Tanana River, there were many birds familiar to me, like Swainson’s thrushes, with their sound-of-summer fluty song, and American robins, whose melody is familiar to every human on the continent.

As we broke into a stand of balsam poplar trees, we heard a slightly metallic song.

Blackpoll warblers are a bird you would expect to hear in South Fairbanks. But this one grabbed my attention because it sang from a tree very close to me. I found him in the binoculars and established a personal connection.

I saw this black-and-white bird, smaller than my hand, its beak open, music pouring out. I remembered the blackpoll warbler making headlines a few years ago. Researchers had discovered that, in fall, after crossing North America from the far north, the birds leap off branches on the East Coast. They then fly thousands of miles over the open Atlantic Ocean on their way to South America.

A team including William DeLuca of the University of Massachusetts, Amherst, travelled to Denali National Park and Nome, as well as Churchill, Manitoba, and Whitehorse, Yukon. They captured male blackpoll warblers, and fitted some with geolocator tags, which detect the amount of sunlight to which the birds are exposed. Later, teammates on the East Coast recaptured a few, and removed the geolocators for a look.

In fall, the Nome warblers took 18 days to fly across North America to the Atlantic coast; a few went to the beaches of North and South Carolina. The birds spent a month there gorging on insects and maybe fruits, before popping from their perches.

They then underwent a non-stop, two-and-one-half day flight across the Atlantic Ocean to wintering grounds in Columbia, Venezuela and Brazil. The farthest of the flyers traveled as much as 12,400 miles roundtrip each year.

About the blackpoll warbler’s over-water journey of 2,000 miles without stopping to refuel, researchers Timothy and Janet Williams wrote: “If a blackpoll warbler were burning gasoline instead of its reserves of body fat, it could boast of getting 720,000 miles to the gallon.”

Scientists with Partners in Flight wrote that the birds’ decline is probably due to changes in the boreal forest because of warming of the atmosphere. They also wrote about the loss of the forest due to extractive industries, as well as the perils of the warblers’ incredible journey. The researchers noted that 586 migrating blackpoll warblers died in one day in Florida, after striking a lighted tower there.

As for the blackpoll warbler I saw in South Fairbanks, I wished him a successful summer. In my mind’s eye, I imagined the first birches flagging yellow in early autumn, when that bird would again be crossing the greens and browns of North America. Near a Carolina beach it would rest for a bit before making a big leap, then flapping and gliding over the deep blue of the Caribbean Sea.