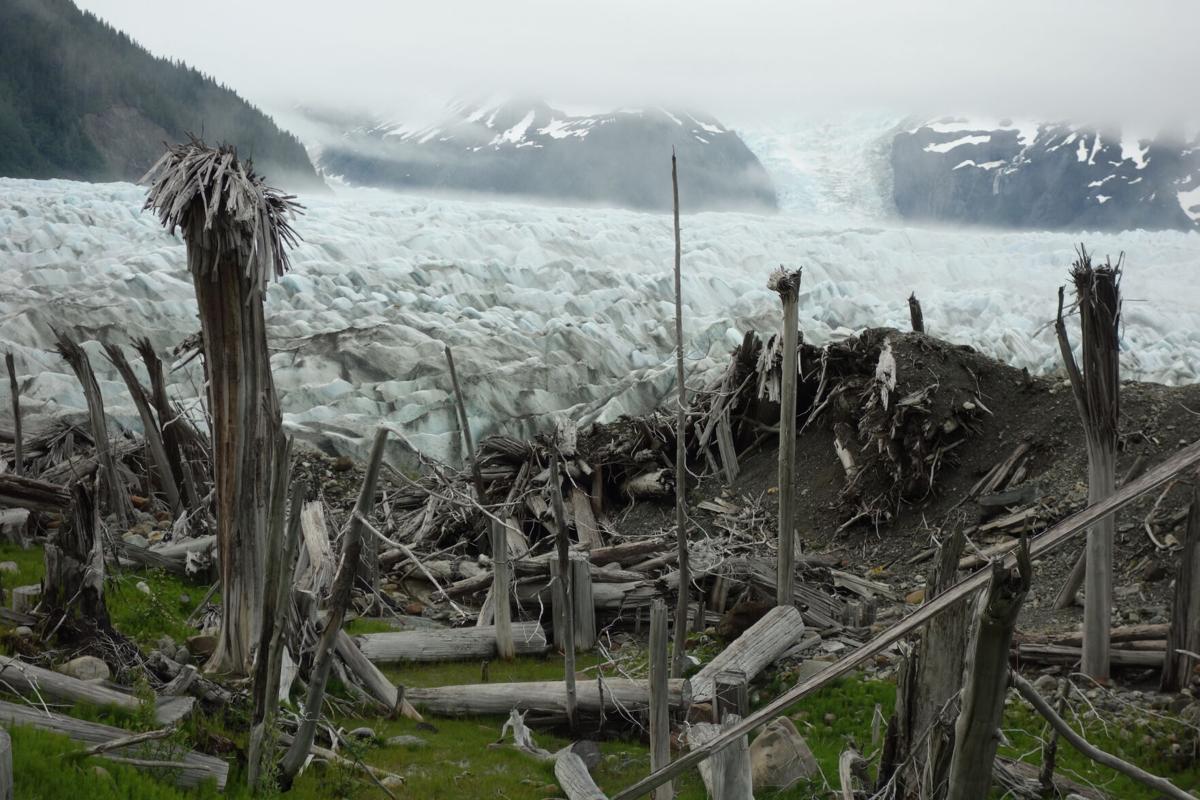 Tree trunks that La Perouse Glacier in Glacier Bay National Park and Preserve ran over at the time of the Civil War. 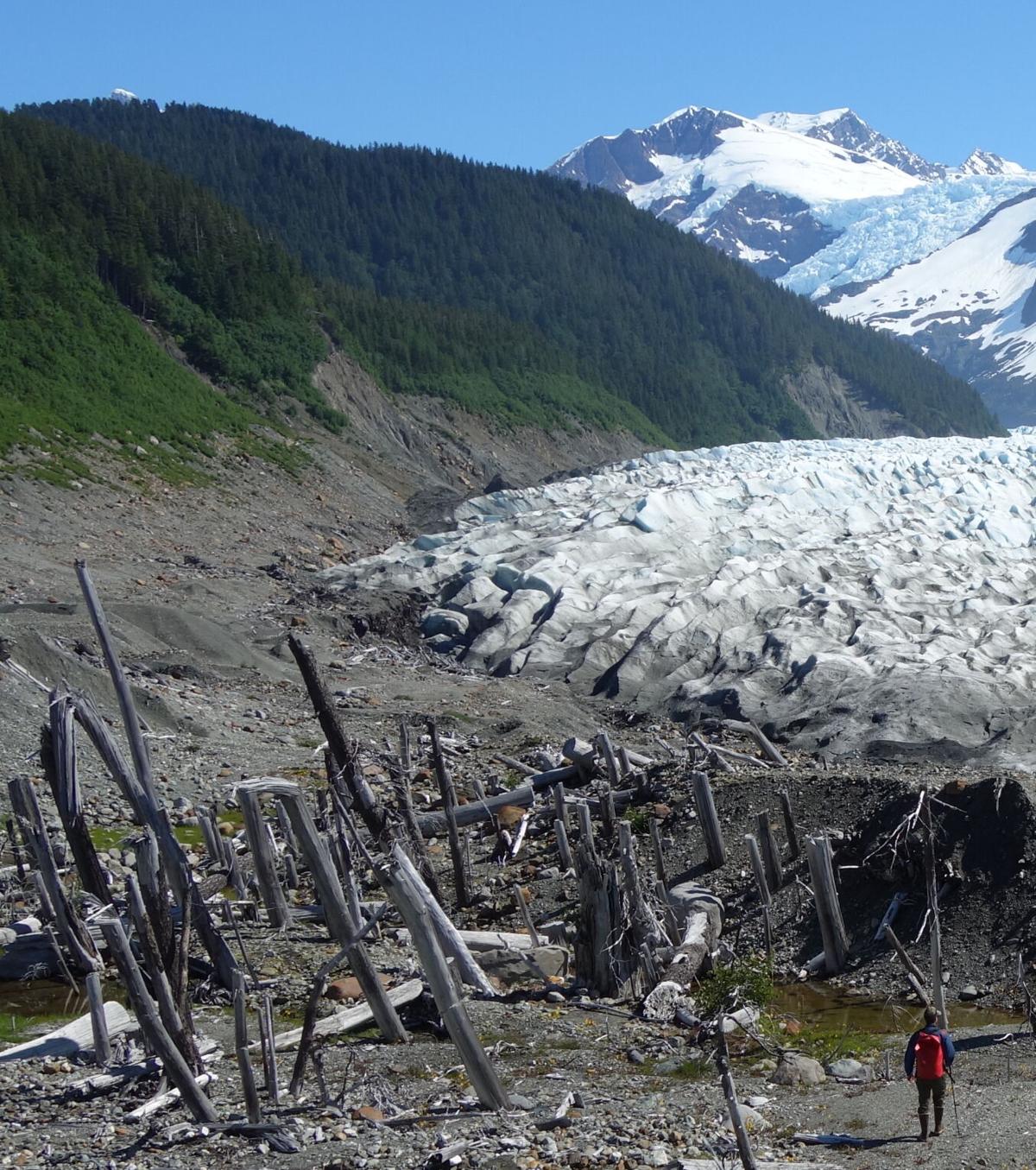 Ben Gaglioti walks to a ghost forest near the tongue of La Perouse Glacier, which ran over the trees during the Civil War. 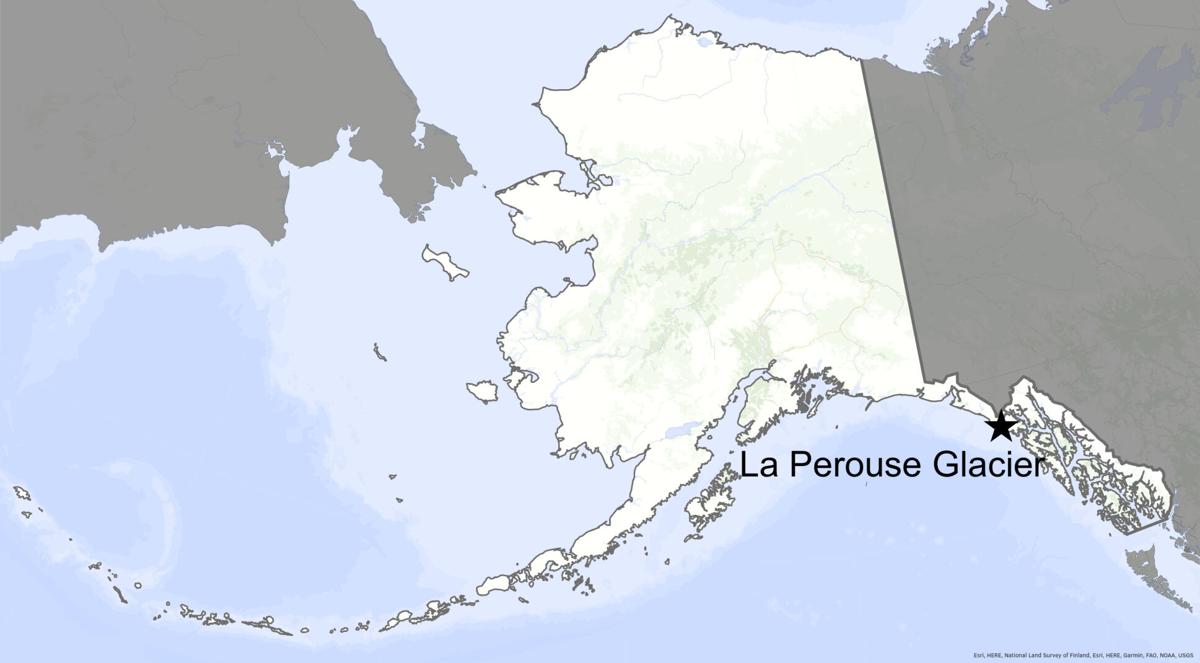 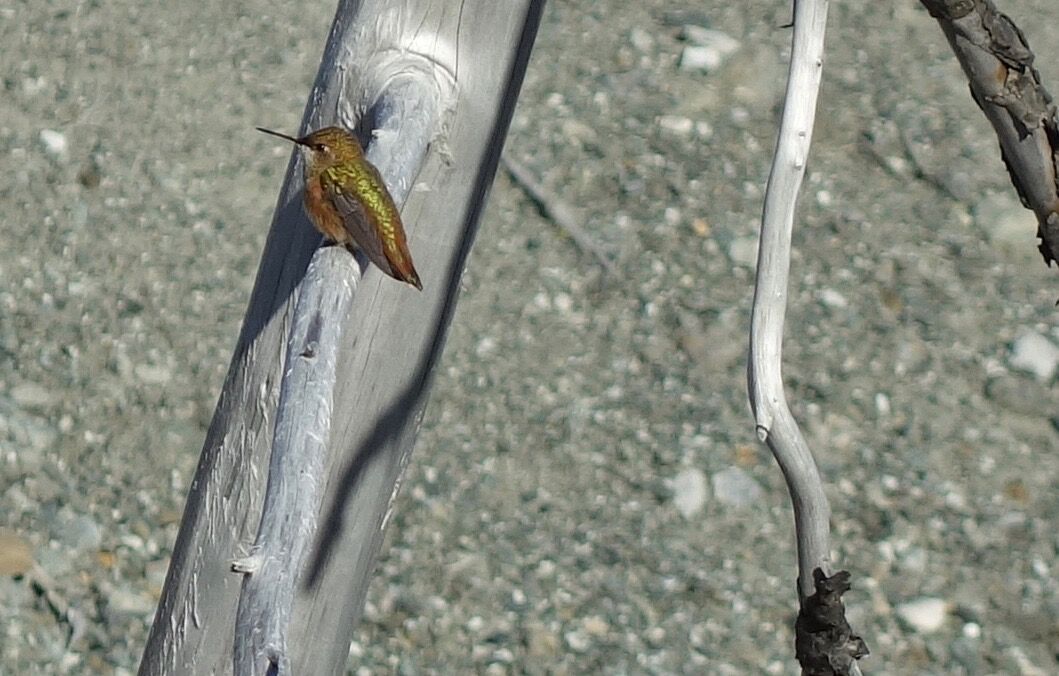 A rufous hummingbird visits a campsite near La Perouse Glacier, on the outer Pacific coast of Glacier Bay National Park and Preserve. Photos by Ned Rozell.

LA PEROUSE GLACIER — During our first lunch at a blue-gravel campsite near this Alaska glacier named after a French explorer, scientist Ben Gaglioti and I had a visitor.

As we sat on bleached slabs of wood, I held in my left hand a rectangular cracker with peanut butter smeared on top.

We heard a loud buzz. A hummingbird hovered in front of my cracker. As I held still, the hummingbird probed the peanut butter, twice, with its needle beak. The cracker transferred the vibration to my left hand, tickling my fingers.

As the bird zoomed off, I looked over at Ben to confirm the experience.

“I think you have superpowers now,” he said.

So began our 11-day visit to this glacier on the outer coast of Glacier Bay National Park and Preserve. It is a place of many bears, the thunder of blue ice falling and a thumb-size bird that got its first taste of peanut butter.

Gaglioti was there to continue exploring a “ghost forest” he and others had discovered a few years earlier. He studies ancient landscapes for his job as an ecologist at the University of Alaska Fairbanks Water and Environmental Research Center.

This ghost forest, a few hundred yards from the swollen tongue of La Perouse Glacier, is where we camped.

We suspended our food in dry bags using a rope we had thrown over a thick grey stem that was once a towering Sitka spruce, bristling with thousands of with vibrant green needles. That was before the glacier ran it over.

Gaglioti and his colleagues — including UAF’s Dan Mann and Greg Wiles of the College of Wooster in Ohio — used tree corers to learn when these trees died, which told them about how long ago the glacier advanced to shear the mighty stems.

The scientists matched the growth rings with still-living rainforest trees nearby. They found that La Perouse Glacier bulldozed these trees some time between 1850 to 1866.

After a year of pandemic-related absence, Gaglioti was happy to scramble back up the giant boulders of an outlet creek to La Perouse Glacier. Explorer William Dall in 1874 named the glacier for the French ship commander who sailed here in 1786. La Perouse fled Alaska soon after he lost 21 men to tidal currents at the mouth of nearby Lituya Bay. He named the island in the bay Cenotaph, a word meaning “empty tomb.”

Gaglioti wanted to tease out what these trees, run over during a cold period known as the Little Ice Age, can tell us about how the forest responds to extreme changes in climate. Not just the warming we are feeling now, but the extreme temperature swings that have happened many times in the past.

Those dead trees we camped amid — some of them 600 years old when the glacier clipped them — hold a long-term record in their growth rings. The scientists compare them with the record stored in live trees, among them giant spruce, hemlock and Alaska yellow cedars that germinated high enough to be safe from the glacier’s advances.

Gaglioti will use dendrochronology — taking pencil-thin cores of live and dead trees as well as slices of dead cedars he removed with a handsaw — to see how trees reacted to temperature changes due to the proximity of the ever-moving ice.

At the hummingbird campsite of dead, grey trees and fine gravel shaded green by a few pioneer plants, we often felt the cold breath of the nearby glacier; in midsummer, we ate dinner while wearing wool caps.

Gaglioti thinks the retreat of the glacier combined with the recent warming of Alaska air temperatures may be a double dose of increased heat to which the trees are responding. Their reaction may be a predictor for how trees all over Southeast are responding to global warming and its possible acceleration.

To gather information, Gaglioti and I hiked the thick, soft, slippery rainforest nearby to gather temperature sensors he installed in dead trees and the ground a few years ago. He also cored a few dozen trees, and, with a handsaw blade of Japanese steel, cut a few biscuits of wood he will bring back to UAF to study in detail.

With grizzly-bear sign light and blue sky overhead, we took our close encounter with the hummingbird as a promise of good things ahead. We had 11 more days to spend in a place with no boot prints except those of our own Xtratufs.