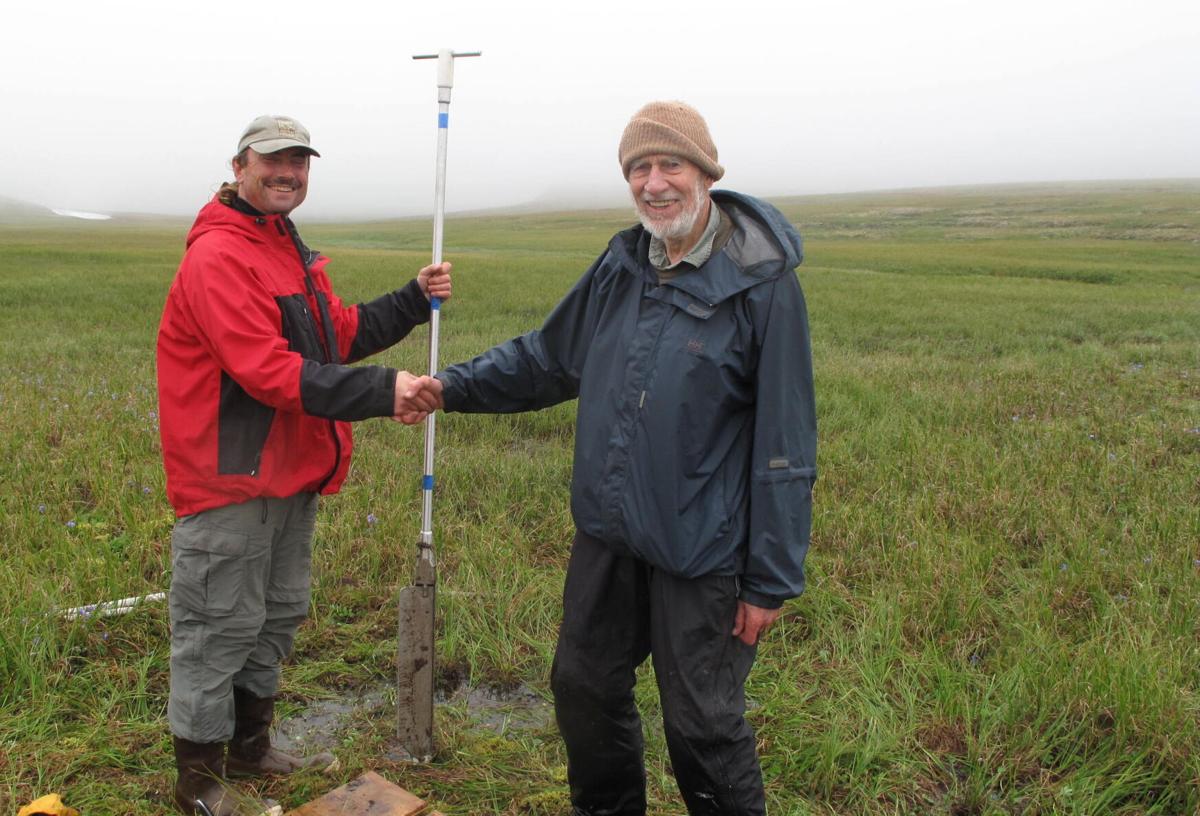 Rich Kleinleder and David Klein on St. Matthew Island in August, 2012, after they pulled a core of sediment from the island. 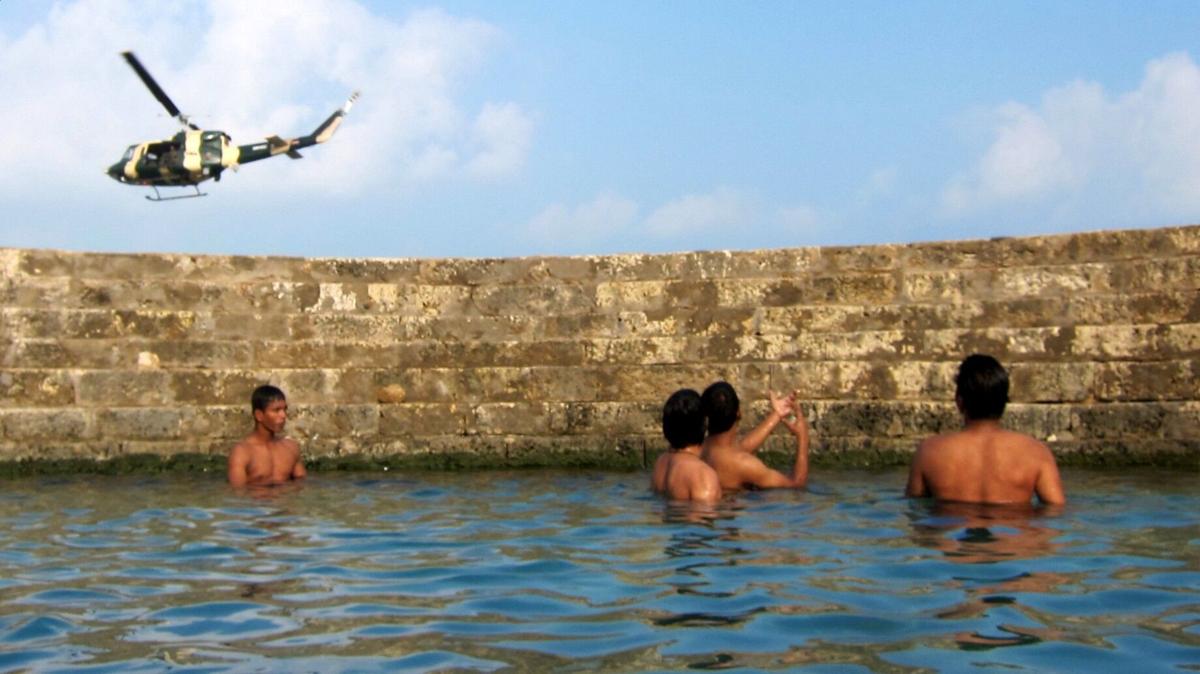 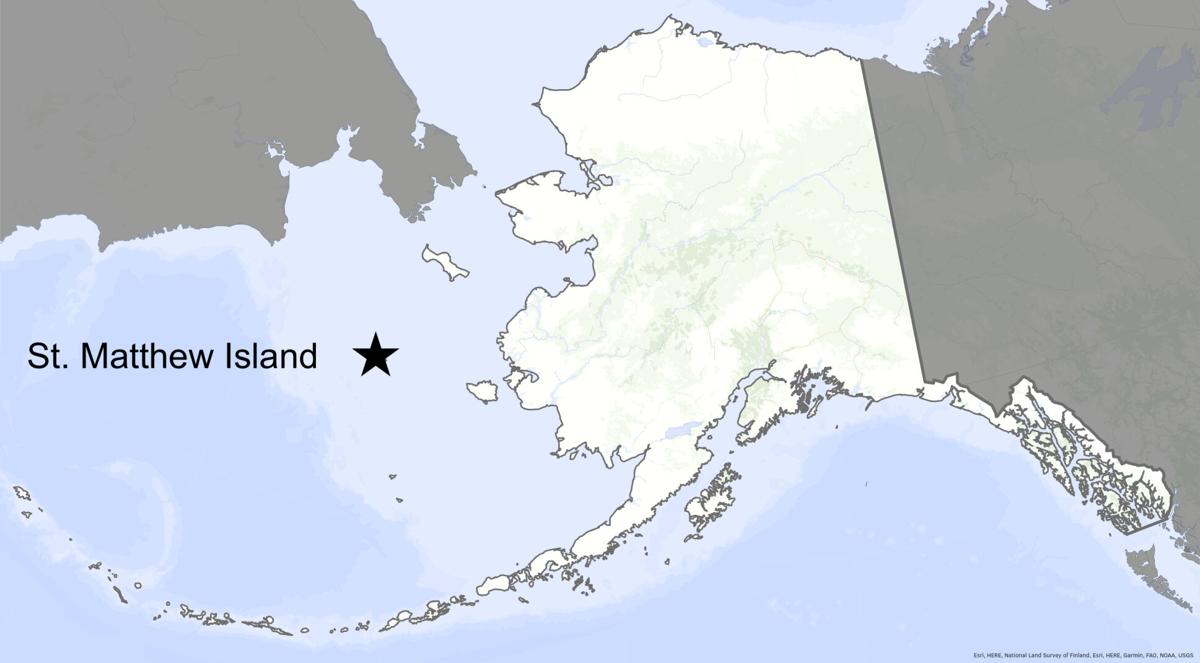 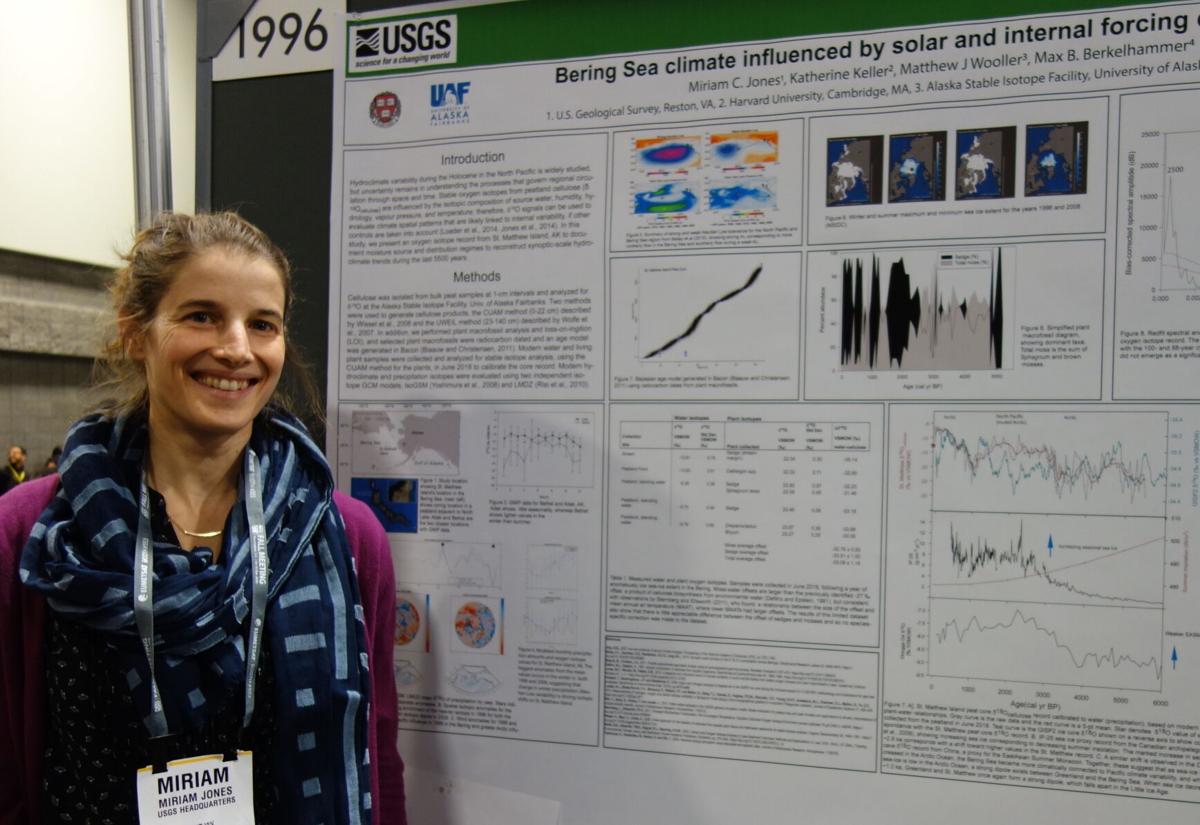 Miriam Jones of the U.S. Geological Survey in Reston, Virginia, during a 2018 conference in Washington, D.C. All photos by Ned Rozell. 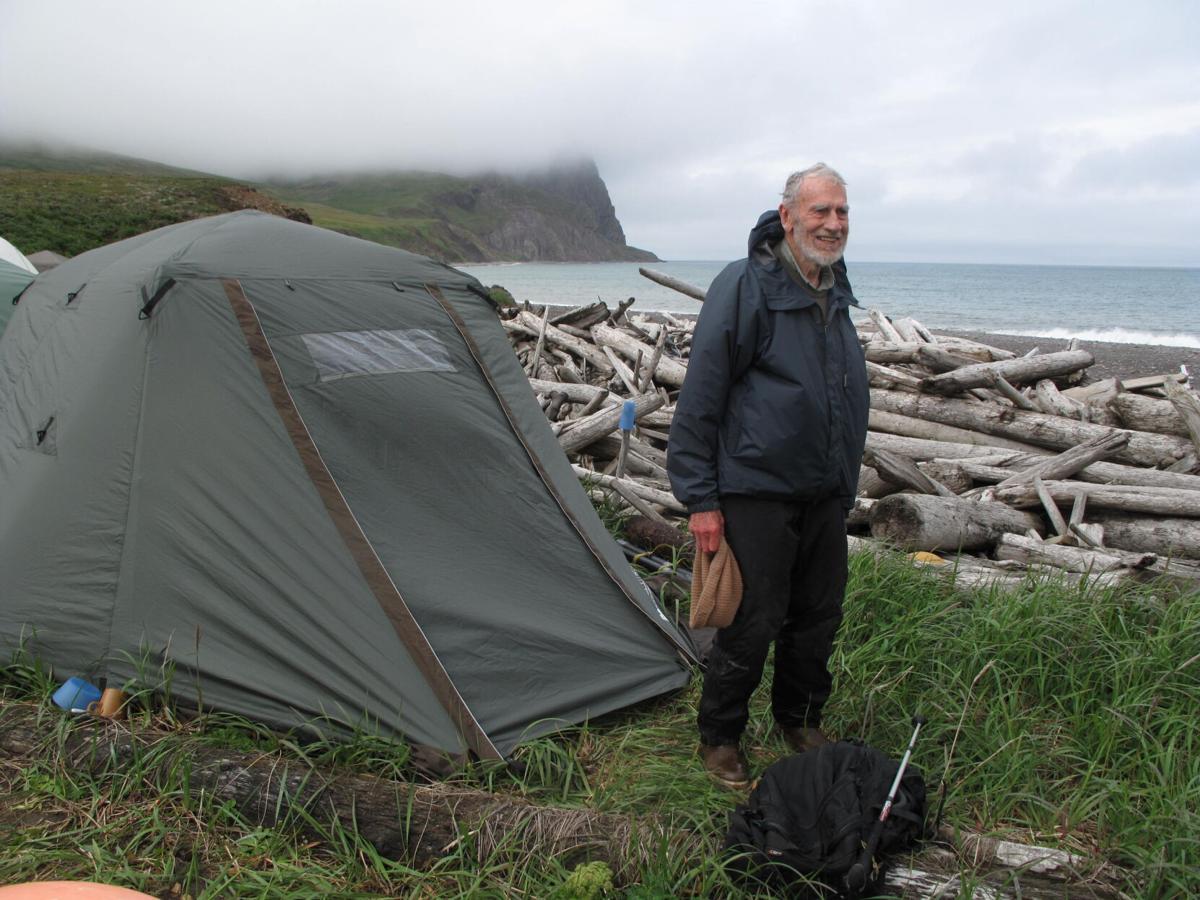 David Klein in front of his tent near Bull Seal Point on St. Matthew Island in 2012. 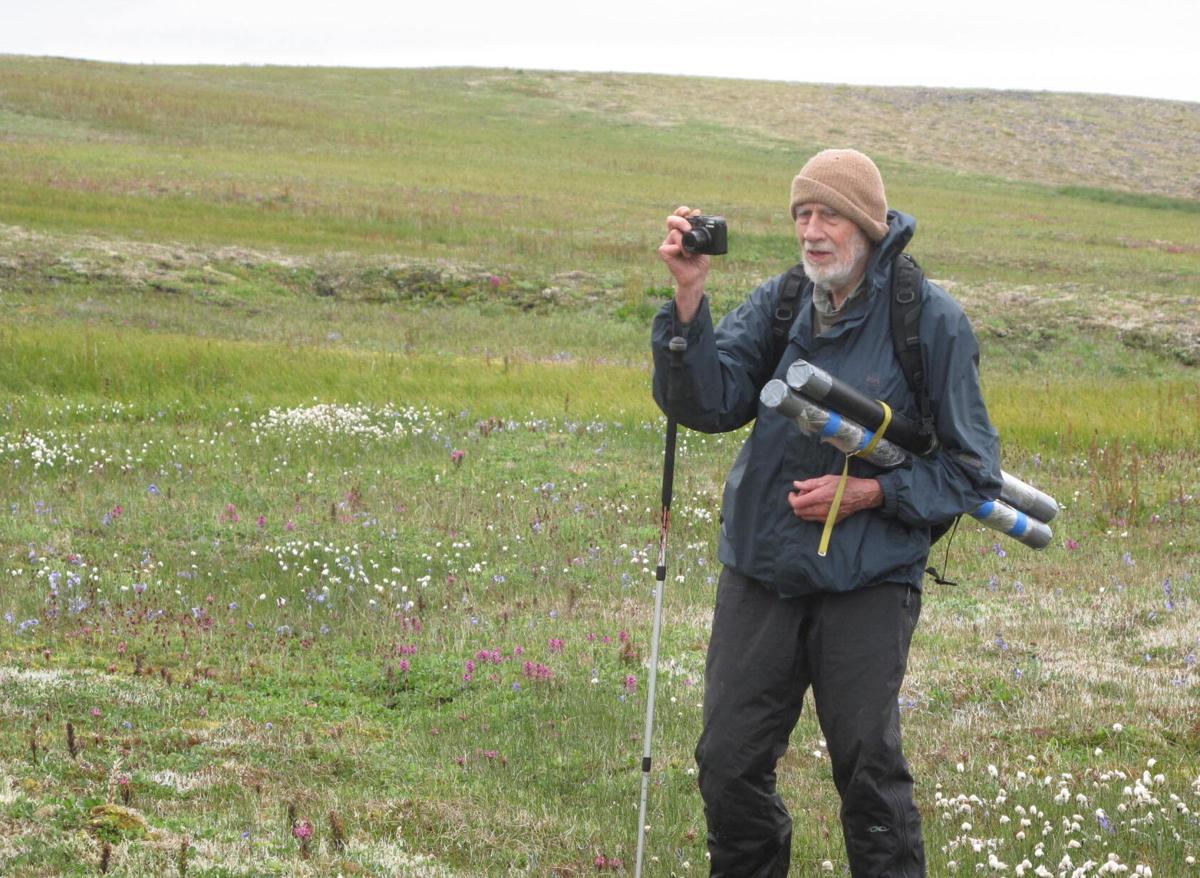 In August 2012, David Klein, then 85, carried sediment cores within plastic pipes over the surface of St. Matthew Island.

Rich Kleinleder and David Klein on St. Matthew Island in August, 2012, after they pulled a core of sediment from the island.

In 2012, an 85-year-old scientist and his son-in-law pulled a cylinder of muck from a faraway island. They carried it home like a newborn baby, froze it, and mailed it to a researcher across the country.

The scientist who received the package — Miriam Jones of the U.S. Geological Survey in Reston, Virginia — used bits of ancient plants within that core of mud to determine that there is less sea ice in the Bering Sea now than any time in the last 5,500 years. Her results are out in a paper published this month.

That 85-year-old scientist — David Klein — is now 93. He lives in Fairbanks. He was my neighbor when he last journeyed to St. Matthew Island. I went on that trip with him and a dozen others. Klein was my cheery tent-mate.

St. Matthew is a 30-mile long, three-mile wide island in the Bering Sea. No one lives there. There is no evidence of any long-term human occupation on its bumpy, treeless, mosquito-free surface. It is one of the farthest places from humans on Earth: 209 miles northwest of the village of Mekoryuk on Nunivak Island.

Some years, but not all, biologists and other scientists make it to the island on the Tiglax, the research ship of the Alaska Maritime National Wildlife Refuge, based in Homer. Klein sailed on that ship during the trip we shared to St. Matthew.

A biologist with a long career of studying caribou and other large mammals, Klein is interested in everything about St. Matthew, an island he knows as well as anyone. The first of his six visits there was in 1957.

In 2012, Klein knew of scientist Miriam Jones’ analysis of sediment cores when she was at the University of Alaska Fairbanks. In getting ready for the trip, he asked her if she could look at a plug of ancient sediment. It might contain a record of pollen and mossy bits going back 12,000 years, when the island was a green mountain range jutting from the Bering Land Bridge.

On a wet and cool first day of August 2012, Klein ate an oatmeal breakfast while sitting on a log from Alaska or Siberia that waves had tossed on St. Matthew’s rocky beach.

Then, with his son-in-law Rich Kleinleder and me, Klein hiked three miles of moist ground to a fen of his choosing.

There, he and Kleinleder, who was volunteering for the wildlife refuge, leaned into a coring tool with its T-handle. With difficulty, they pulled up a three-foot cylinder of muck. They deftly sliced it with knives, and bound it with plastic wrap.

Careful to lay the sediment plug on its side, so different levels would not ooze into one another and mess up the dating, they rested the core in a few tubes of plastic pipe.

Klein hiked back across St. Matthew, carrying the core samples horizontal as he steadied himself with a walking pole. There, moving across the forbs and flowers, singing voles scurrying from his approach, was an uncommon 85-year-old.

Klein made it back to the group campsite. He slid the tubes into a tent. Satisfied, he built a driftwood fire. Klein sat on a log, sipped from a mug, and looked out at the ocean. He saw the arcing back of a gray whale, maybe the same one he had seen there in 1957.

Years after she received the core, Miriam Jones had not forgotten about its existence in the freezer. When she had time, she thawed it.

She sent vegetation bits she found in it, along with 2018 water and plant samples from St. Matthew, to Matthew Wooller at the Alaska Stable Isotope Facility at the University of Alaska Fairbanks.

Wooller and Jones found that the three-foot long cylinder of mud was 5,500 years old at the bottom. That’s about when people started shoving rocks to assemble Stonehenge, and began saddling camels in Egypt.

In the isotope lab, the scientists found the fingerprints of water that nourished the plants for thousands of years. From that, they could infer when the island was surrounded by sea ice.

A dependable apron of sea ice once enticed polar bears to live on the island (they disappeared, probably hunted off by whalers in the late 1800s). Red foxes — now the largest mammals there — scurried across the seasonal ice to reach the island from mainland Alaska.

In the winters of 2018 and 2019, sea ice did not wrap around St. Matthew. The closest it formed on the surface of the ocean was hundreds of miles to the north.

Those years, the Bering Sea was warmer than it had been. Many fish species wandered farther northward or otherwise disappeared from their normal ranges in the Bering Sea. Sea birds that made a living from the riches of those cold waters died off by the thousands.

Because satellites have only allowed scientists to take a detailed look at sea-ice coverage since the late 1970s, researchers did not know if the no-ice-in-winter condition of the Bering Sea was something that happens every few hundred years. It might be a natural occurrence, subject to the whims of large weather patterns.

The results from the core suggest that we are now in uncharted waters — the Bering Sea is in a warm state unlike any in the past 5,000 years.

Jones and her coauthors also wrote that sea ice may have a delayed reaction to warmer air and sea temperatures; the Bering Sea may already be “committed to” ice-free winters by the end of this century.

Like many results in science, this one was a long time comin’ from muddy boots to typeset black lines. For Klein, who drove up the dirt Alaska Highway in a Model-A Ford and later became a mentor to dozens of scientists, the result is another feather in his woolen cap.