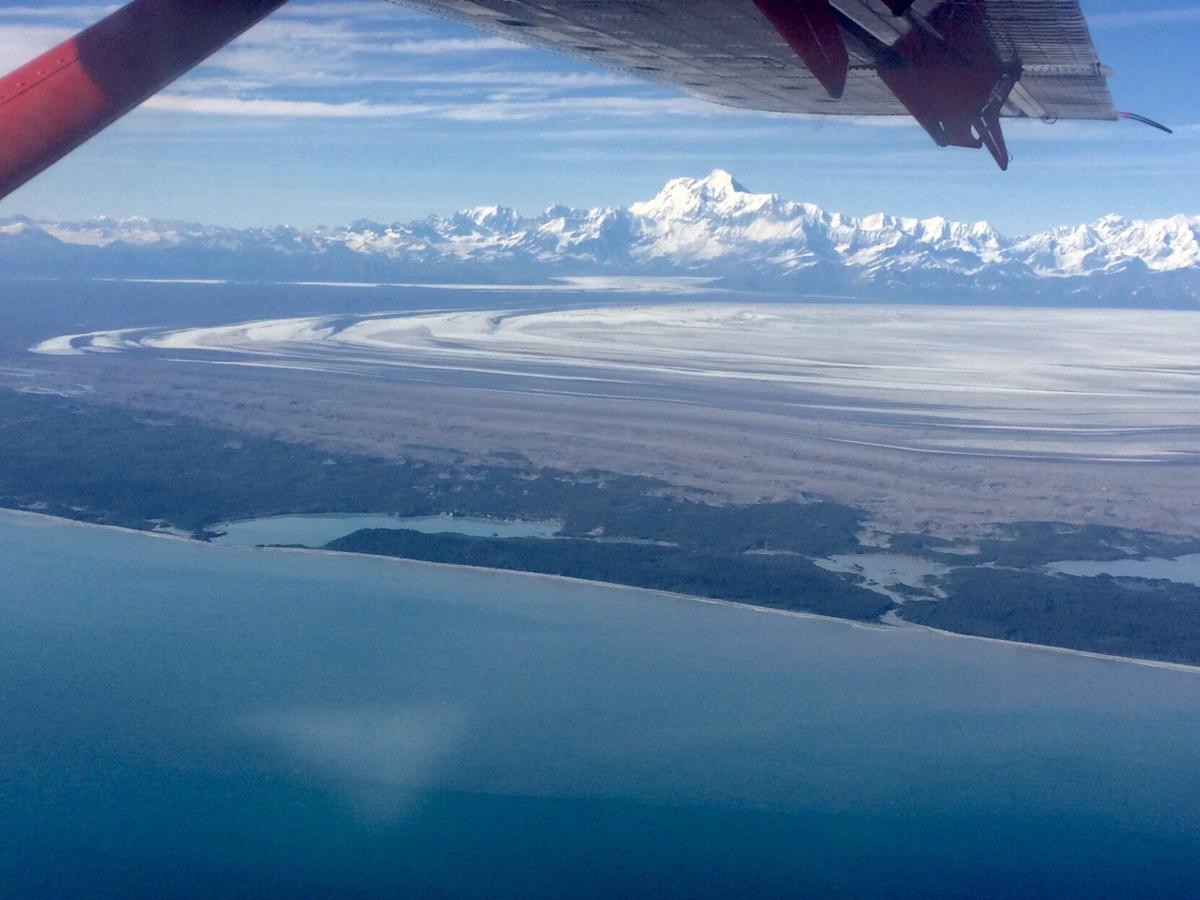 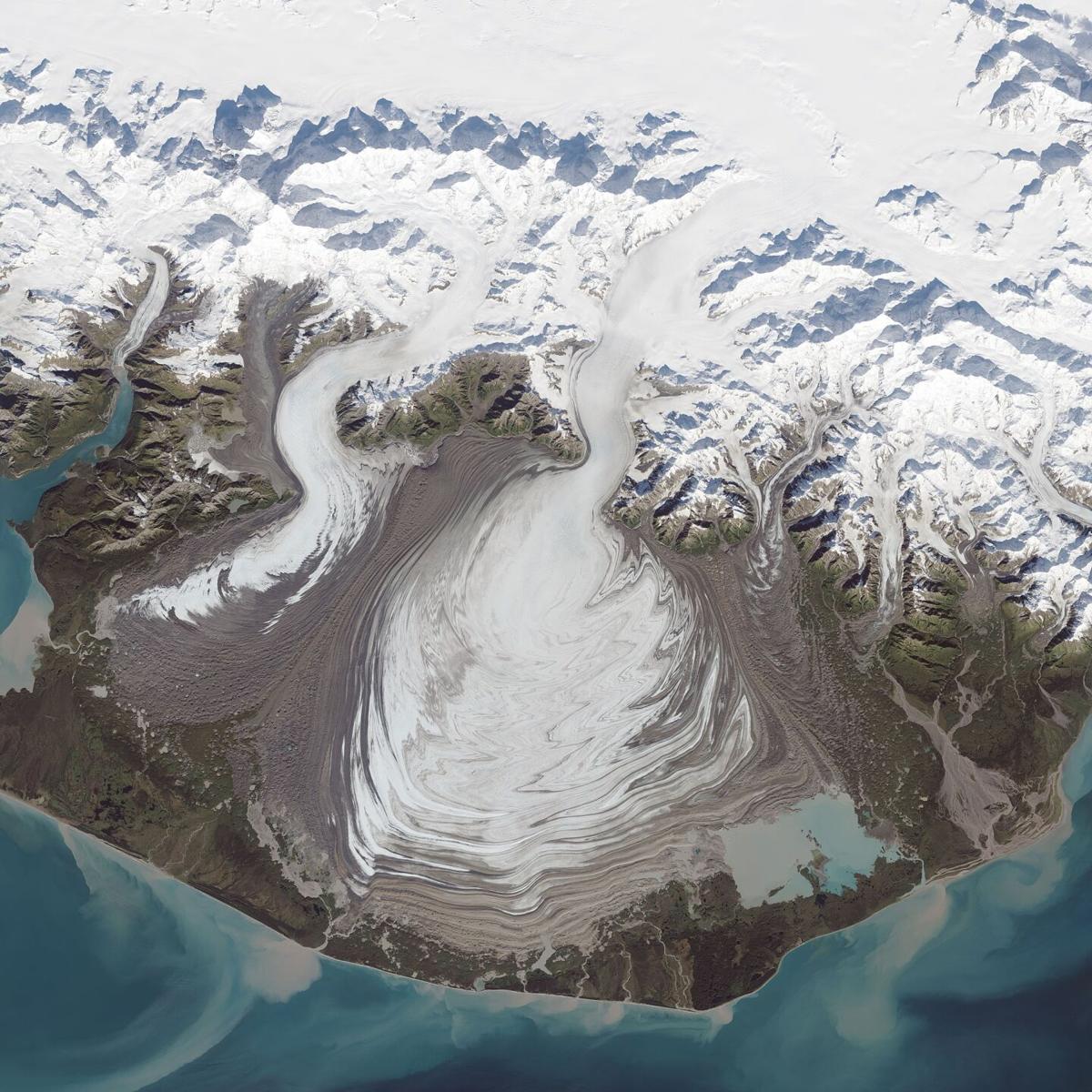 Glaciologist Martin Truffer changed his team’s plan the other day. He and a crew of other scientists were about to travel to Malaspina Glacier — near the elbow of Alaska where Southeast Alaska hinges onto the mainland — but the glacier has wrecked his campsite.

“Mark Fahenstock [another team member] looked at velocities of the ice and the glacier is surging,” Truffer said. “The site where we were going to go is moving about 30 to 40 feet per day.”

That glacier activity, which Fahenstock saw when comparing satellite images, means that the smooth face of Malaspina in the area Truffer wanted to camp is now cracked up.

“It’s not going to be uncrevassed any more,” he said.

Truffer, of UAF’s Geophysical Institute, is head of a team studying Malaspina Glacier, which he described as 1) pancake-shaped and 2) the size of Rhode Island.

Massive icefields near the Canada/Alaska border feed Malaspina ice through a slot in the mountains. Freed of mountain walls, Malaspina’s ice oozes over the coastal plain like batter on a hot griddle.

Near the Gulf of Alaska about 30 miles northwest of Yakutat, the glacier is — on clear days — visible from a window seat on an Alaska Airlines flight from Southeast Alaska to Anchorage. But the dirty-white blob on the cheek of Alaska is not as large as it used to be, which is why Truffer and his colleagues are studying it.

The giant pancake of Malaspina Glacier does not calve into the ocean. An apron of gravel forms an uneven dike between ice and the sea. Salt-water lagoons are intruding on the glacier, though. If the current surge pushes a large mass of ice into the ocean, it could trigger a massive retreat.

“The Gulf of Alaska has warm water, about 7-to-10 degrees C,” Truffer said. “As far as the ice is concerned, that’s hot.”

Glaciers like Malaspina surge — suddenly get up and go — when water at the base of the ice can’t escape through under-glacier channels that close up in winter. Backed-up water can lift the glacier ice. Gravity then shoves the mass forward.

The recent surge didn’t run across the entire immense face of the glacier, but cracks are now covering the plateau where Truffer wanted to do seismic studies in March 2021.

In those studies, glaciologists set off an explosive, the signal of which would travel through the ice and bounce off the bedrock or gravel beneath it. The results would have helped the scientists find the thickness of the glacier and see whether it rests on hard bedrock or soft, deforming sediments.

Truffer has now put off that study for a year, but he and his team will get out on the glacier in the first week of May 2021, and then for a longer field camp in June to July, followed by a fall trip.

Despite being such a large and iconic Alaska glacier, Malaspina has not been studied much. It’s not easy to get to, requiring a flight from Yakutat by fixed-wing plane or helicopter. Then there’s the question of where to land.

“It’s a hard glacier to study because it’s so large,” Truffer said. “Like, where do you start?”

The glaciologists want to predict and model the future of Malaspina Glacier in a warmer climate. To get a hint, they look east on the map to Yakutat Bay, into which cruise ships sail more than 50 miles to reach the calving face of Hubbard Glacier. They know that Hubbard’s icy tongue used to be located where Yakutat Bay is today, before the glacier began a rapid retreat hundreds of years ago.

In places, Malaspina Glacier’s ice sits 1,000 feet deep on land not far from the Gulf of Alaska. The bed of the glacier is in places beneath sea level, which means that Malaspina will probably act much like Hubbard Glacier.

Some day, Malaspina will retreat toward the high coastal mountains, leaving in its wake a massive salt-water bay dotted with islands.