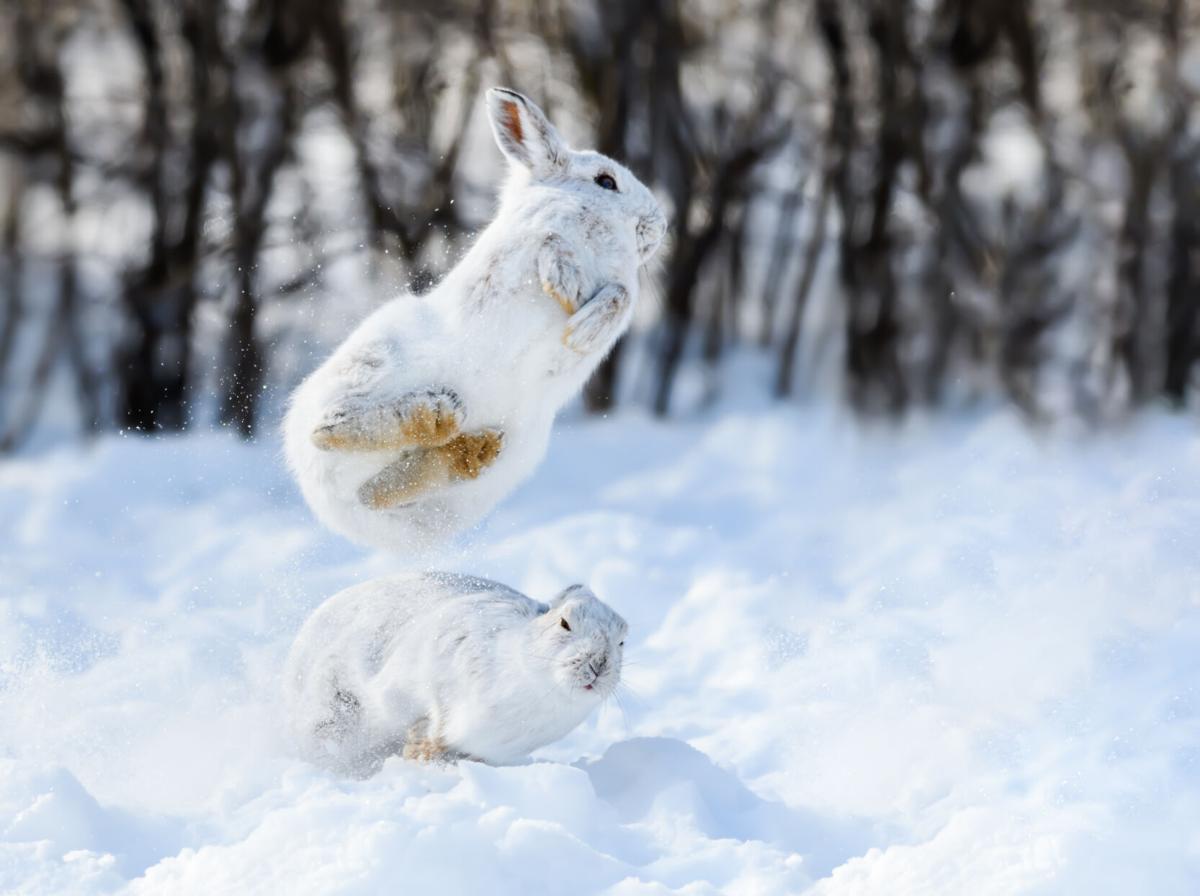 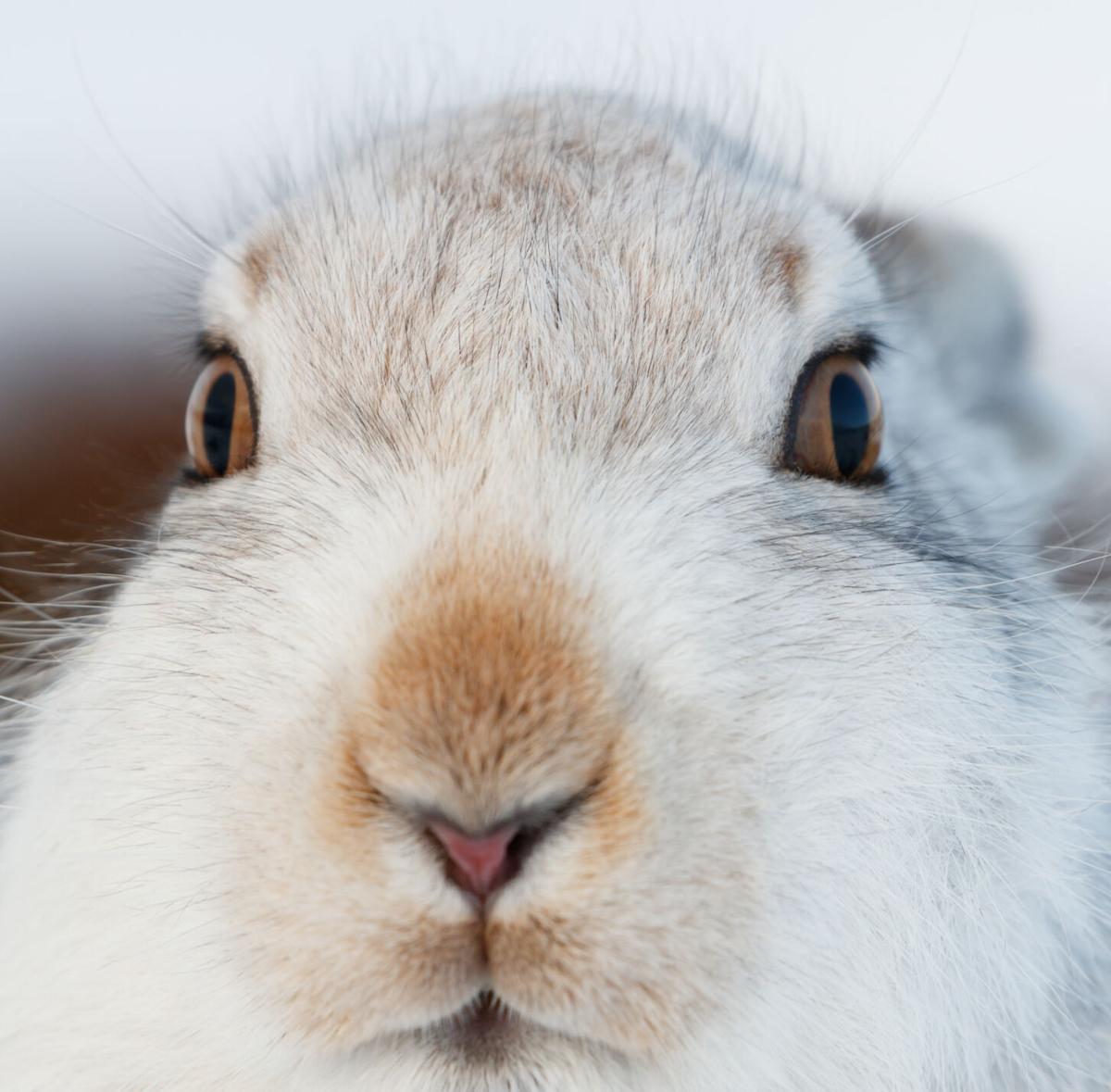 While many of Anchorage’s human residents (especially of the winter-sports-loving kind) are hoping desperately for snow, maybe even praying for it as I write these words in early November, other creatures face even more desperate times while the local landscape remains bare and drab.

I think in particular of those northern animals whose brownish summertime fur coats shift to white with winter’s approach and arrival. Though a few wildlife species depend on such camouflage, here my musings will focus on snowshoe hares.

On our recent walks around town, my dog and I have discovered the remains of several hares whose white bodies in largely brown and gray surroundings likely made them easier pickings for the predators that eat them: lynx of course, but also foxes, coyotes, owls, and northern goshawks, to name some others.

I’ve also spotted a few living hares in brushy areas, places where they’d be all but invisible in summer and fall, but now stand out brightly. Not a good circumstance for them.

These discoveries and encounters have reminded me of a time, now many years past, when I watched hares in my yard while living on the Hillside, and some of what I learned about their largely secretive ways.

One September morning after breakfast, I stepped to the dining room’s north-facing window and peered outside.  The window was a favorite Hillside observation post, a looking glass through which I studied the nature of my backyard, a semi-wild mix of lawn and spruce-birch forest.

My attention was drawn to a smallish, rounded brown form, huddled in the grass and nibbling on clover. Yes, a snowshoe hare. Dependent on stealth and camouflage, they are nearly invisible on snow in winter, their bodies fully white except for large brown eyes.  In summer, their grayish-brown fur excellently blends with the forest’s mottled, shadowed floor.

A hare’s natural disguise doesn’t work so well on monochromatic green, though, which is likely why I saw them most frequently from May through September, come to dine on lawn grass and clover.

To be honest, I didn’t normally pay much attention to the neighborhood’s hares.  Their habits don’t make for easy or interesting study: in the open, they tend to remain still, depending (for better or worse) on the effectiveness of their camouflage; in woodlands, they’re almost impossible to track.  And though secretive in nature, they’re common creatures of the forest.  Seeing a hare is nothing like catching a glimpse of a bear or lynx or owl.

Their furtive qualities also make them less engaging than other common forest residents, for instance the delightfully excitable chickadees and squirrels that visited my Hillside backyard, looking for meals.

That day, however, my interest in the animal lingered and grew.  It was the fur that first grabbed my attention. Though a month or more from the first heavy snows, the hare’s shift to winter white had already begun.

I grabbed my binoculars and took a closer look.  Hares always retain some white on their undersides, where it’s easily hidden in summer.  But this one’s long back feet were solidly white from toes to ankles and above, as though it had slipped on large white slippers.  Small patches of white also marked the hare’s face: around the mouth, under the chin, on the cheek.  Atop its head, the hare’s ears were already mostly white, with brown-and-black tips.

Maybe it was the sharp contrast in color between white ears and brown body, but I more easily noticed how the hare was almost constantly moving its ears, often independently of one another like thinly oval, furred mini-satellite dishes.

Nose twitching steadily, the hare was busily munching clover when a magpie called in its loud, raspy voice.  The hare sat tight, motionless except for its rotating ears:  first one ear forward, another turned 90 degrees to the right or left; both ears forward. both ears turned to the sides, then flicked backward.

I wondered when the transformation of its coat had begun, when it would be complete. Then, more questions. How long does the color shift take?  Does it vary from year to year, from individual to individual?  And why do I almost never see hares in winter?  Is the white disguise that good?

A week later, I noticed two hares in the backyard.  One I recognized by its pattern of white patches; the other remained more fully brown.  As I watched, the two engaged in behavior I’d never before witnessed and haven’t seen since.  While one hare sat still, the other jumped high into the air, again and again.  Leaping, it punched the air with its back legs, quick, sharp jabs.  What the heck is going on, I wondered.

The jumping and kicking had a frolicking quality to them.  I imagined it to be a spirited attempt at play.  But I was also reminded how little I really knew (and continue to know) about hares. And other wild neighbors.

Curious about both the hare’s behavior and changing coat, I did some reading and tracked down a couple of wildlife researchers. Among the things I learned: the hare’s jumping and kicking is not play, but ritualized aggression, a show of dominance that apparently communicates something to the effect of “Get outta here.  This is my turf.”

Hares can get especially rowdy in spring and early summer, the time of mating.  Male hares will chase and scrap and generally lose all good sense—namely their normal instincts for secrecy—in their frenzied desire to breed with females in heat.

In losing their minds (so to speak), sex-crazed hares will often also lose their lives, either to predators or to cars while madly dashing across streets.  Females stay in estrus for only a few hours at a time, so the zaniness is short-lived.  But it’s intense enough to lead to the notion of “Mad March Hare Syndrome.”

As for the color shift: that usually lasts about a month, though the duration and timing varies from hare to hare.  Scientists believe the change is driven mostly by daylight, but temperature also likely plays a role.  And the transition is indeed patchy, rather than smooth.

One other bit of natural history helps to explain their annual “disappearance” in winter: Lepus americanus is a mostly nocturnal creature.

Given the length of Anchorage’s winter nights—more than 15 hours of darkness from late October through mid-February, with a peak of 18½ hours on the winter solstice—hares have abundant time to feed and move about unseen.  Combine that with their superior camouflage and my own greater tendency to remain indoors during the cold, dark months, and it figures I’d be less likely to notice hares in winter’s white.

My attention shifted to other matters, but that October I again began keeping watch for the Hillside hares. I wondered how white their coats had become in the days since I’d last observed them. Snow had fallen on the Hillside, but melted within a few hours.  A fully or mostly white hare should have been easy to spot on the gray and brown late-autumn landscape (much like they’ve been easy to spot this year at Kincaid).  Had they already gone into nocturnal hiding?  Vanished for the season?

I continued to check for them daily, but usually only for moments at a time.  One morning as I kept watch, a cow moose passed just outside the sliding glass doors where I stood.  We gazed at each other briefly, then she sauntered off into the woods.  Here then gone, so quickly.

Those long-ago episodes with Hillside hares and moose, and my brief encounters with hares this snowless early winter, have me thinking (again) about how much happens within the local landscape—even within my neighborhood or yard—that I never see or sense.  I’m given glimpses now and then.  But those only hint of the “hidden” world that I too rarely notice.

Even with my passion for wildlife, for nature, I too easily become cocooned within the walls of my house, consumed by the busyness of work or distracted by computer, television, newspaper—and now, iPhone.

I remind myself, once more, to make room in my busy schedule; to watch, listen, pay attention, get “out there” more often.  And have patience.  These neighbors, after all, bring immeasurable pleasure and wonder into my life.  Whether lynx or moose or chickadees or hares (or daddy longlegs!), they are all worth knowing better.