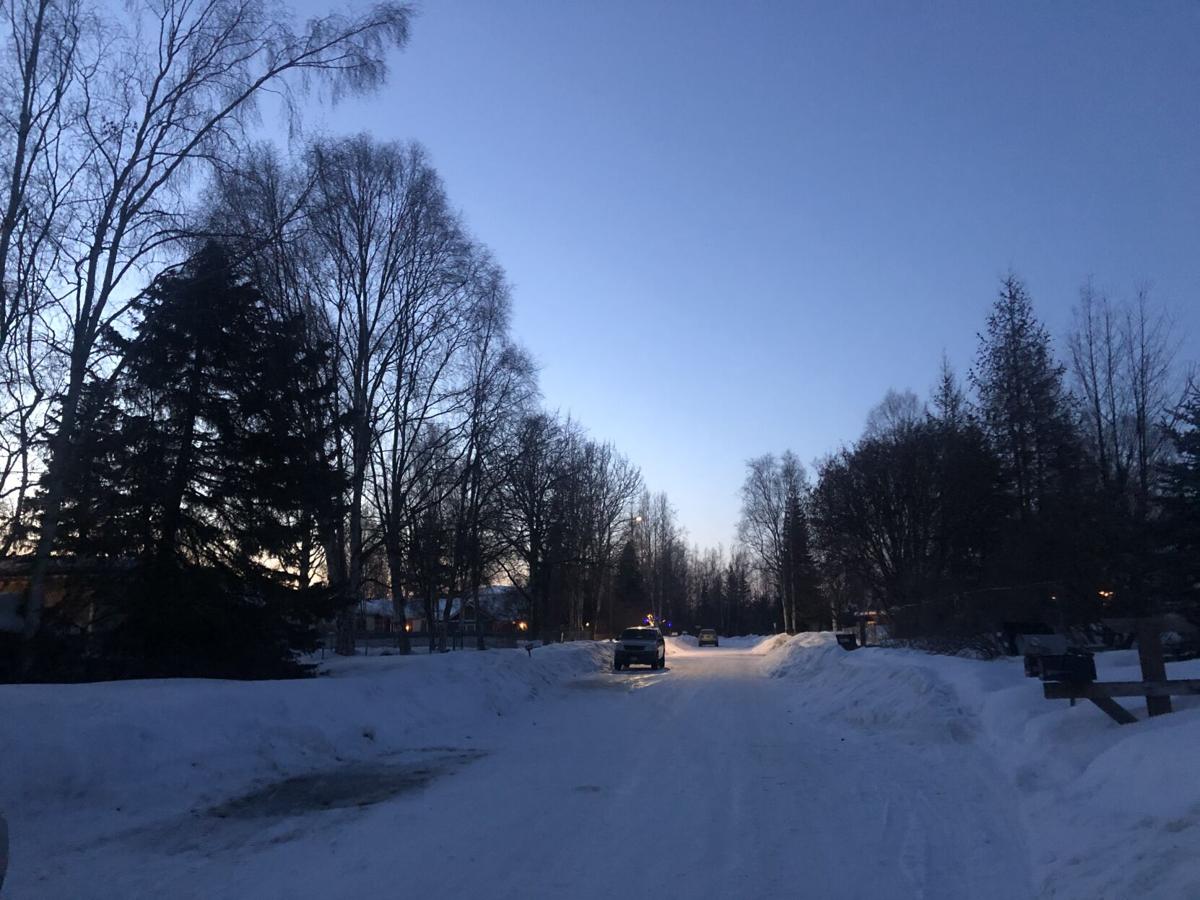 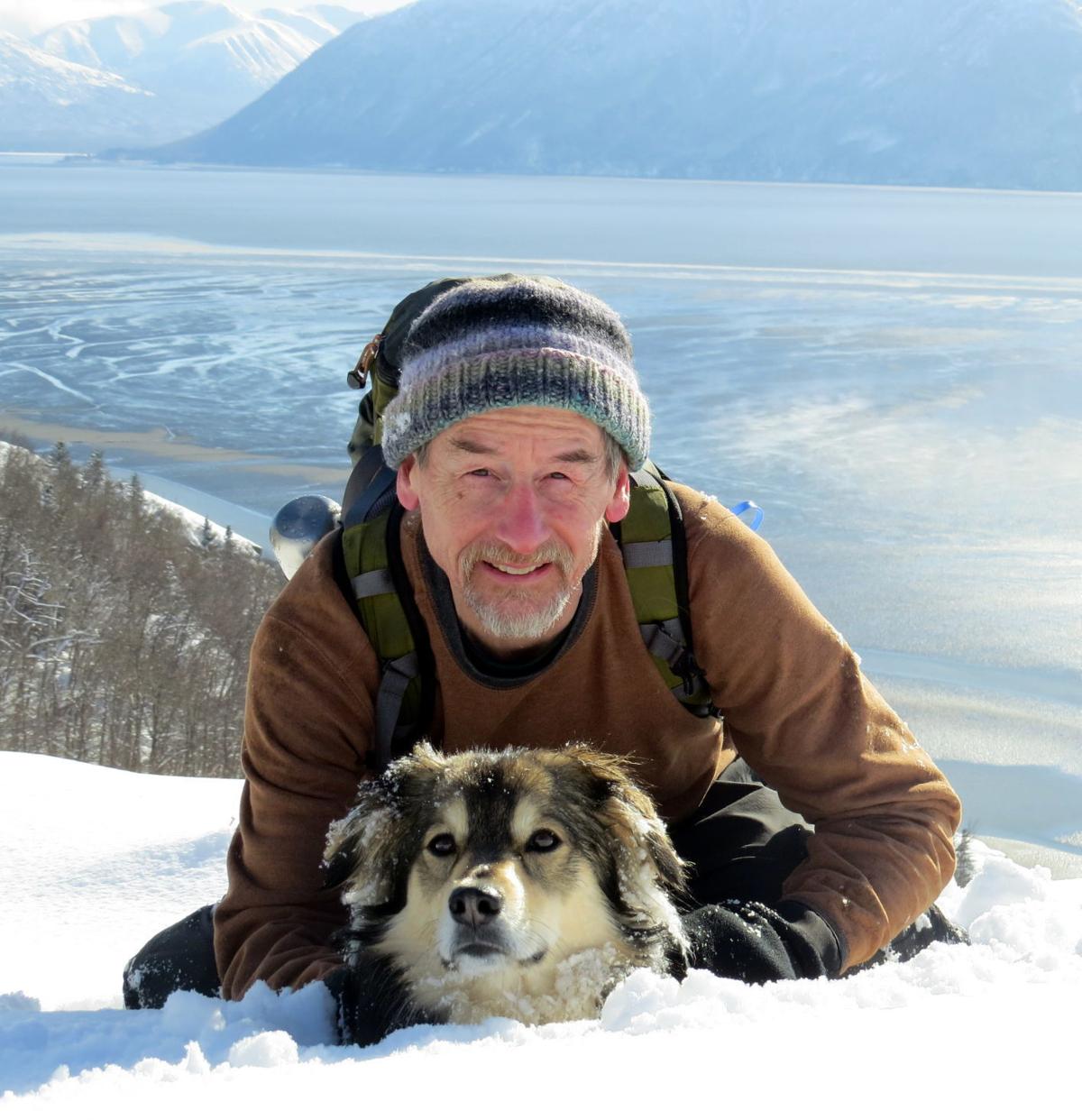 Among the many gifts Denali has given me is this one: my mixed collie gets me out of the house and into the larger world more frequently than I would venture on my own. This in turn opens me up to all sorts of possibilities, including a greater appreciation of what I like to call the “wondrous wild,” right here, in my ordinary west Anchorage neighborhood.

I don’t have to go far to find this sense of wonder. Sometimes it reveals itself before I step off the front deck. But what I’d like to consider here are my daily strolls with Denali and some of what I’ve encountered because of them.

We began our strolling ritual the first summer Denali entered my life, when she was little more than a year old. While my previous dog, Coya, would stay in the yard when let outside in the morning, Denali quickly learned she could jump over the fence. And so she did. Repeatedly. I couldn’t break her of that habit and I didn’t want to tie her down. So I began taking her for daily “poop strolls.”

Though at first it seemed something of an inconvenience, I learned to enjoy our morning strolls and they became part of our shared experience, a ritual that we both savor.

Eight years later, besides going on our longer walks and hikes and hill climbs, we now stroll the neighborhood at least three times a day, usually for 15 to 20 minutes and occasionally more. (Even though Denali is less inclined to jump the fence.)

Nowadays, I’ll confess, I often let her stroll unleashed, particularly when we stay on our own short, dead-end street, which gets little traffic—though I do have the leash ready if circumstances require it.

Besides the fact that our street is normally free of moving vehicles and other human-canine walkers when we take our strolls, Denali has slowed down enough that she generally stays close, content to sniff her way around the neighborhood.

Now and then she’ll disappear, but that doesn’t happen often. And she doesn’t wander as far as she once did during her fence-jumping days (even those earlier wanderings still in the immediate area).

In short, I trust her to stay closer—and come sooner rather than later when I shout her name. And I think she trusts me to be more patient and more tolerant of her sometimes-mischievous ways.

While once upon a time our strolls were (aside from bodily functions) chiefly about covering ground and getting from here to there, wherever that might be, nowadays they’re more meandering in nature, with frequent pauses. For Denali that means sniffing out our neighborhood’s abundant scents. For me it means paying greater attention to what’s happening around us. And in that stopping, looking, and listening, I am pulled out of my thinking-too-much self and into the larger world, inhabited by all sorts of marvelous beings, great and small.

The birds are almost always the first to gain my attention. Even in the depths of winter, songbirds are active and talking among themselves. That such tiny, feather-weight creatures as chickadees and redpolls can survive the long, cold nights is itself a marvel. Soon the voices of our winter birds will be joined by many others, as migratory species return. (Already, gulls are screeching along the coast; soon, geese and cranes will be announcing themselves, along with singing passerines.)

Now and then, other critters reveal themselves: merlins and goshawks and eagles; moose and bears, squirrels and porcupines. And I don’t have to leave my street to note their passage, their presence.

But what I want to reflect upon here are the quieter moments when even the neighborhood’s wild animals have gone silent or otherwise hidden themselves. Some of my favorite strolls with Denali in recent times have been at night, when stars and constellations, however faint in the city lights, reveal themselves in the darkened sky, and my little world opens up even as I shrink in size.

It’s a humbling thing, to realize I’m such a tiny speck in the bigger scheme of things, a cosmos so grand it’s impossible to imagine its full extent. Yet such moments are freeing, too, as the ego dissolves along with the need or desire to do, to accomplish, and instead simply be. And how wondrous is it to be alive and part of something so miraculous—and have an awareness of it, even if incomplete?

As we move into spring and then summer and our Alaska days grow and grow and nights diminish enough that we eventually “lose” the stars above and around us (if only for a while), there is also the extended twilight to relish. This happened to me recently.

Denali and I left the house at about 9:30, an hour or so after sunset. The sky was clear and a faint glow lingered along the northwest horizon, visible from my yard and street, grading into a darker, indigo blueness, not quite black enough yet for stars.

And then I noticed the trees, silhouetted against the sky, adding to the grandeur of that evening.

Sometimes lately it has seemed to me that trees—especially trees bare of leaves, like the winter and early spring birches that line much of my street—somehow have a greater presence at night. Or maybe it’s simply that on certain still and silent nights, with my thoughts quieted too, I’m the one more present in the company of trees. In such moments there seems to be a greater possibility of what I can only call a kind of connection, maybe even a shared awareness.

I can’t explain this, it’s beyond rational explanation. Yet absolutely real.

So there I was with the towering trees, and that fantastic twilight sky, and Denali sniffing around somewhere near, and the small world of my street—including the houses, some dark and others artificially brightened, the people inside them going about their own lives—opening up into something larger, and that too opening further, on and on, maybe into infinity or something approaching it.

To be part of this? What a wondrous thing.

And then, of course, I started thinking about all of what I was experiencing and, I suppose, tried to make sense of it or put it into words, as I’m doing here, and that deeper connection, if that’s what it was, dissolved.

Not long afterward I rounded up Denali and walked back home, feeling richer somehow. Enlivened. In the afterglow of the experience, my neighborhood seemed a little less ordinary than I usually give it credit for being. And it didn’t matter at all whether I could understand or explain what had just happened.


Anchorage nature writer Bill Sherwonit is a widely published essayist and the author of more than a dozen books, including “Living with Wildness: An Alaskan Odyssey” and “Animal Stories: Encounters with Alaska’s Wildlife.” Readers wishing to send comments or questions directly to Bill may do so at akgriz@hotmail.com.