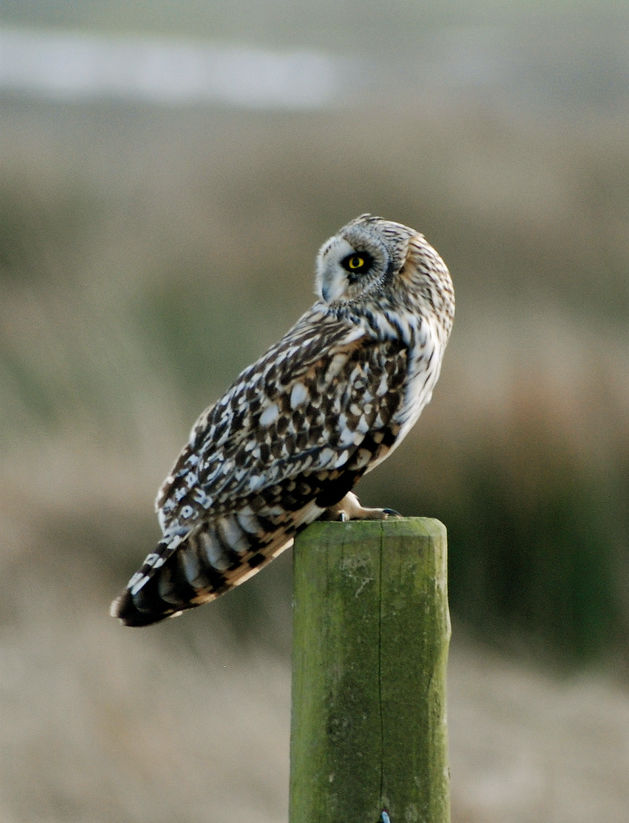 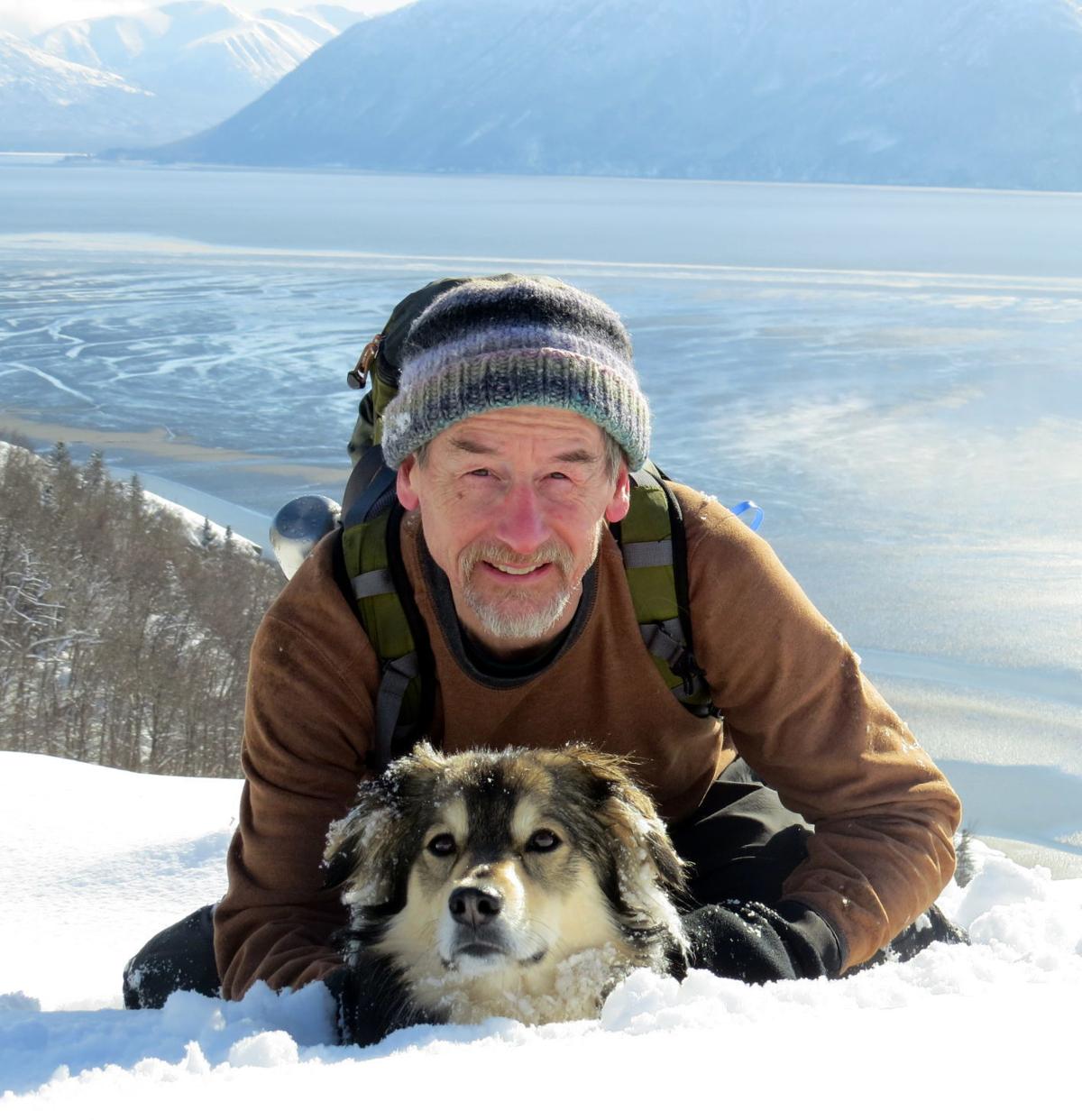 Among the things I love most about my walks through Anchorage’s wildlands are the surprises, the unexpected encounters, that turn what had been an enjoyable but routine outing into something extraordinary. This recently happened when Jan and I and our two dogs were hiking Kincaid Park’s Bluff Trail, an informal but well-defined footpath that follows the top of Kincaid’s dunes where they meet Cook Inlet’s flats.

With Jan up front (sharing the lead with Denali), we were nearing the high point of the dunes, when a large raptor appeared, suddenly and closely and low enough in the air that Jan instinctively ducked and shouted back to me, “Did you see that?”

I hadn’t yet seen the bird. But moments later it flew into view, a large hawk that I quickly identified as an immature northern goshawk, with brown back and brown-and-white streaking below.

A second raptor then appeared, also flying low but behind the first. It too was brownish above, brown streaked below. In the excitement of the moment (and not having much raptor expertise) I initially thought that both birds were goshawks. Then, looking through binoculars, I saw the second raptor had a distinctively owlish face.

While the goshawk zoomed right past us—its path taking the bird not far above Jan’s head--the other raptor looped above us. At first I couldn’t believe my eyes. What would an owl be doing in the company of a goshawk? I peered again through my binoculars and the head was definitely that of an owl. And its wing beats, too, were different than the hawk’s, stiffer or more exaggerated somehow.

That’s when it hit me: could this second bird be a short-eared owl? I knew that the species is a bird of “open country,” for instance grassland meadows and coastal marshes. In fact I’d seen one, years ago, within the Anchorage Coastal Wildlife Refuge’s grass and sedge flats, not far from this spot. And though bordered by forest, the dunes where we encountered the birds are covered with tall grasses. So the habitat fit.

If my suspicions were correct, a more experienced birder might reasonably ask how I could have mistaken a short-eared owl for a goshawk, which is considerably larger and has a different body shape and flight pattern. In my defense, I’ll say this: things were happening very fast, both birds had similar coloration, and though the short-eared owl has a smaller body, it also has broad wings with a span that may reach 3½ feet, comparable to a goshawk’s.

Things got even stranger when the goshawk streaked to a large cottonwood, some 100 yards away. After circling above us, the owl followed as if in pursuit. Could the owl be chasing the goshawk, a bird known for its great ferocity?

The owl looped above the cottonwood a couple of times, then headed toward the inlet. And here’s the strangest part of all: as it flew, the owl circled higher and higher. And as it rose into the sky, the bird also flew far from the coastal flats below us and continued across the inlet. Eventually it became a speck in the distance, barely visible even with binoculars.

The goshawk, meanwhile, had left its perch and disappeared while our attention was focused on the high-flying owl, which in my estimation eventually climbed well over 1,000 feet above the inlet.

Both excited and puzzled by what we’d seen, Jan and I had a “Wow, what did we just witness?” exchange. And of course I vowed to learn more. My desire to better understand what we’d seen led me to bird guides, the Internet, and some Alaskan birders who are much more knowledgeable than I.

That research strengthened my belief that I’d gotten a small but spectacular glimpse into the life of a short-eared owl. The flight of such owls is variously described as wavering, with erratic to stiff, deep or even “floppy” wing beats, and an overall effect that vaguely resembles the flight of a moth. That leaves a lot of room for interpretation—can a wing beat be both stiff and floppy?—but it fit my sense of an unusual wing-flapping style. And the comparison to a moth’s flight made some sense.

My online search also confirmed that the open habitat short-eared owls prefer may include dunes. Yes! I silently exclaimed upon discovering that tidbit of information. The website “All About Birds” further noted that short-eared owls are “extremely maneuverable in the air” and, even more relevant to my observations, they sometimes “soar hawklike on their long, broad wings, a flight mode they probably use for migratory travel.”

Neither of the local contacts I reached had observed the short-eared owl behavior that I described to them, but Alaskan celebrity Mr. Whitekeys—also an avid birder—wrote back that he’s “seen smaller Hawk Owls dart out of the trees and attack migrating Harlan’s Hawks and Rough-legged Hawks that were passing through. The little owls had no problem zipping out and harassing raptors that were much larger than themselves.”

Eventually my search led to Ted Swem, an endangered-species specialist with the U.S. Fish and Wildlife Service who has also done lots of work with Alaska’s owls. In an email response to my questions, Swem commented, “I think everything you saw is perfectly reasonable for a goshawk and short-ear. . . . There’s nothing about your account that makes me skeptical. [Yay!] Smaller raptors frequently go after and mob larger raptors—it happens all the time.”

Though Swem couldn’t recall seeing a short-eared owl “go after” larger hawks, he added, “I have no doubt they would do what you saw—mobbing a larger raptor.

“Further,” he assured me, “they do migrate during day, soar up high, and cross open water. I’ve seen all of those things, including seeing them migrate into Alaska in spring, high up along the coast of the Gulf of Alaska.

“So your interpretation is very reasonable.”

Other questions remain, of course. For instance: what circumstances prompted the owl to chase the goshawk? Was it a chance encounter? And did that altercation happen to occur during the owl’s migration? Or just as it was preparing to fly south?

Or consider this possibility: perhaps the short-eared owl, keyed up by a sudden encounter with the goshawk—and our small group of humans and dogs—simply flew high and far over the inlet in a burst of excitement, after its own ordinary day had turned into something unexpectedly remarkable.