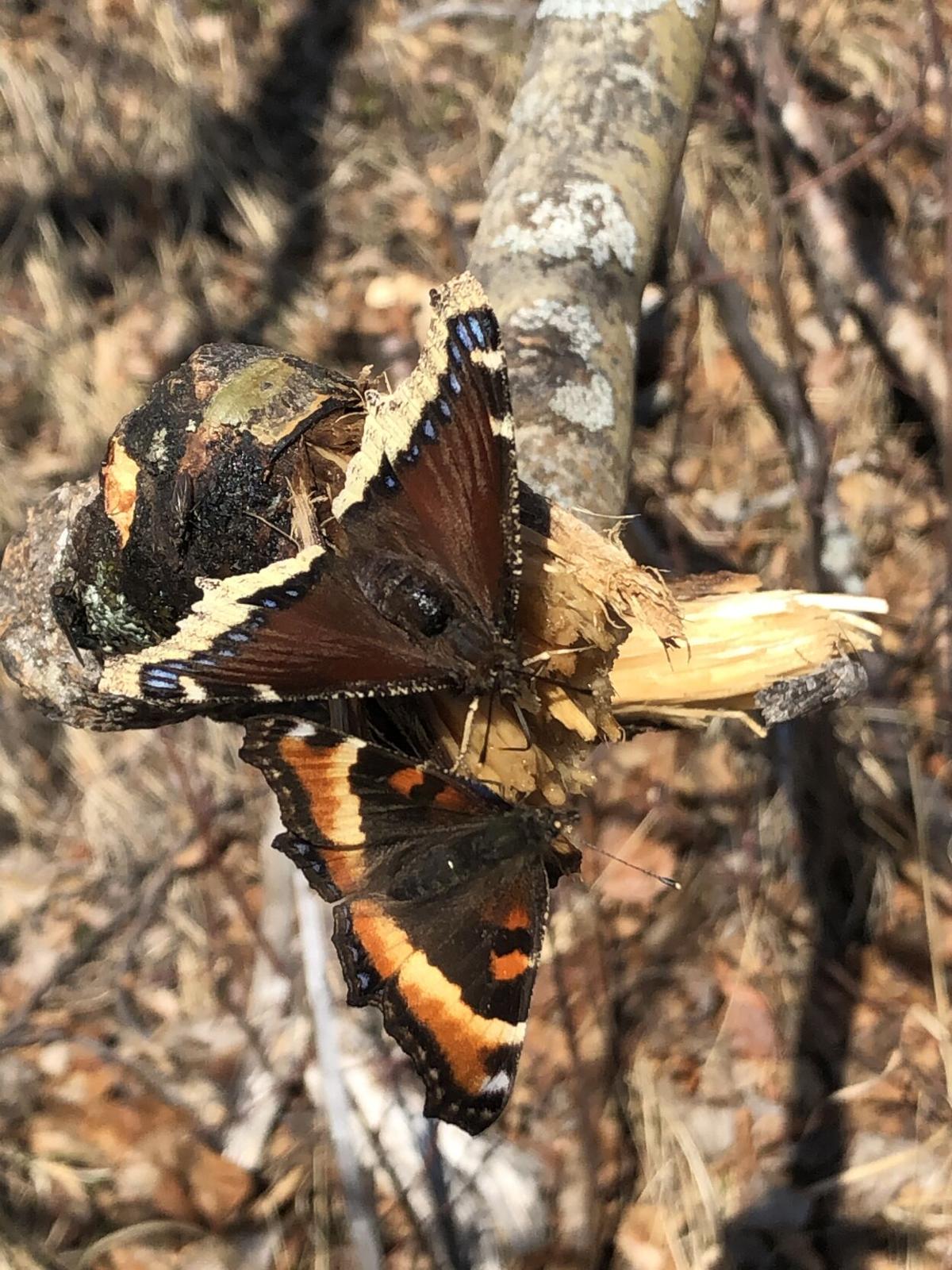 A mourning cloak and a tortoiseshell "drinking" cottonwood sap 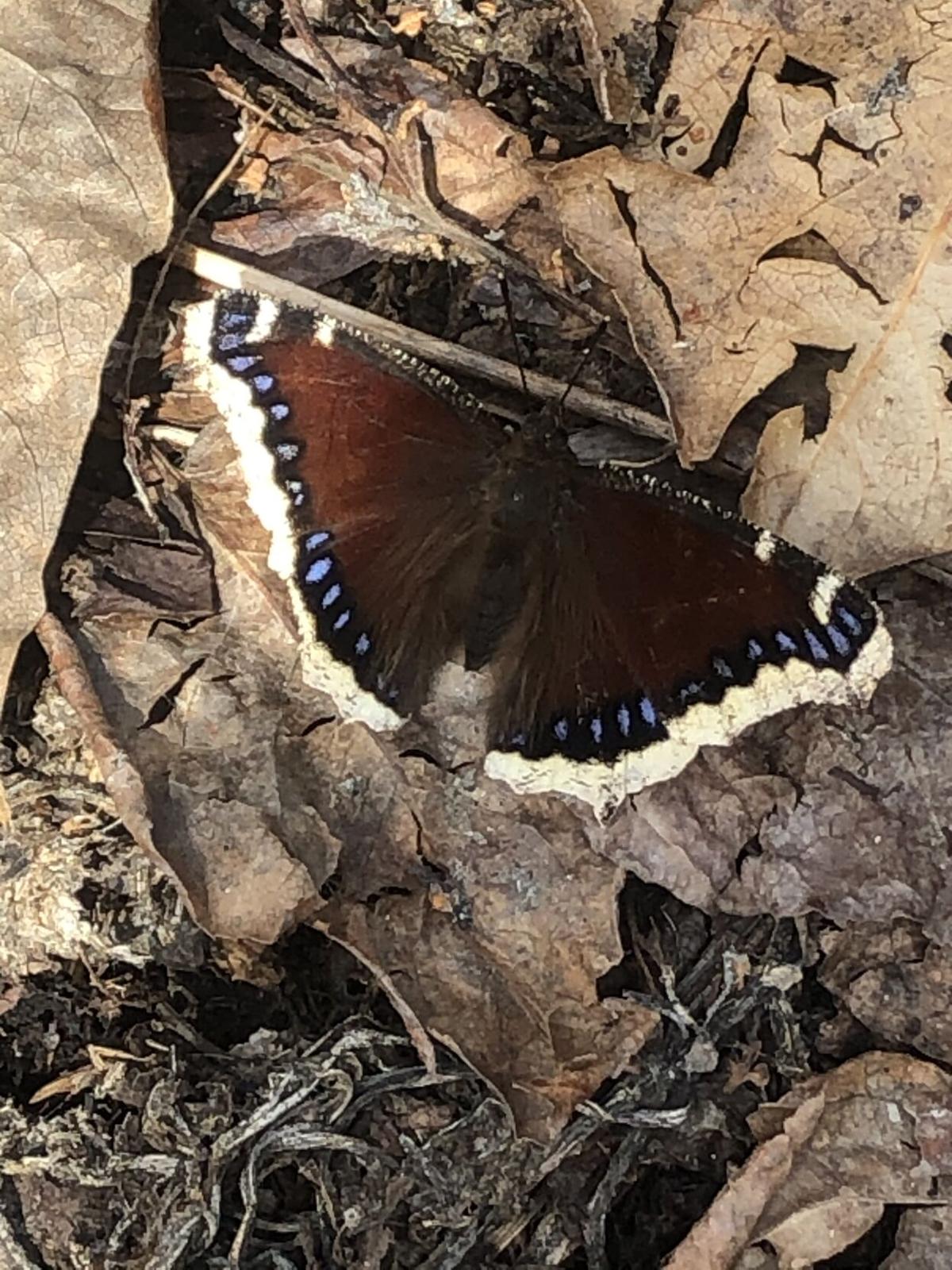 A mourning cloak butterfly resting on the ground

A mourning cloak and a tortoiseshell "drinking" cottonwood sap

A mourning cloak butterfly resting on the ground

Something highly unusual happened in late April, something that stunned me. In the space of a couple days, two popular Alaska columnists who regularly examine the wild nature of Alaska highlighted butterflies in their weekly columns.

Homesteader/outdoorsman John Schandelmeier and science writer Ned Rozell usually take strikingly different approaches in their columns. But during the latter days of April, each highlighted Alaska butterflies. Schandelmeier (in my experience, the more unlikely of the pair to mention any insects other than mosquitoes) discussed the return of migrating painted lady butterflies to the Paxson-Delta Junction area; and Rozell noted the seasonal revival of a Compton’s tortoiseshell at an Interior cabin that he visited in early spring.

My surprise was of the happy sort, because in my middle and now elder years I’ve come to more greatly appreciate and pay attention to butterflies and their presence in Alaska, particularly in the Anchorage Bowl and Chugach Front Range.

It turns out I have my own butterfly story to share. And while butterflies were only a small part of the stories that Schandelmeier and Rozell told, the remainder of this column is dedicated to the mourning cloak butterfly.

Mourning cloaks are considered “brush-footed” butterflies and belong to the Nymphalidae family. As entomologist Dominique M. Collett notes in his “Insects of South-central Alaska” guidebook, “These butterflies do not use their reduced forelegs (which look hairy or brush-like, thus “brush-footed”) and appear to have only four legs. Most of the butterflies in this family are robust, living several months. They have colorful patterns on the upper side of the wings and are camouflaged on the undersides, allowing them to blend in with the background when they are at rest with their wings folded.”

That helpful introduction explains part of the mourning cloak’s appeal to me: they are beautiful butterflies, though in an understated rather than gaudy way.

The wings’ upper sides are largely chocolate brown (at least to my eyes; some have described the color as “purple brown”). That I love chocolate may help to explain the butterfly’s appeal to me, along with the fact that brown has long been one of my favorite colors; and as a boy, I loved brown more than any other color. But that, I suppose, is another story.

Much of the wings’ edges are marked by a lighter, beige band. And between that band and the larger chocolate area, is another thin, dark, almost black band with strings of blue spots. The combination is, well, lovely.

Some (like me) may wonder why these butterflies are named “mourning cloaks.” An online search revealed that the common name for this species (which scientists have named Nymphalis antiopa) literally translates to “mourning cloak” in several languages, including German, Dutch, and those of Scandinavian countries, the reason being that the color pattern resembles cloaks traditionally worn by people in mourning.

In Great Britain the butterfly is more commonly called “Camberwell Beauty,” apparently because an eighteenth century English entomologist named Moses Harris “discovered” two of the butterflies in the Camberwell district of London in 1748 and decided to give them that name. I don’t know if Harris figured no one had ever noticed the butterflies before so they were his to name, but he claimed naming rights for all of England.

Here’s an even better story from England: according to Wikipedia, a twentieth century British entomologist, L. Hugh Newman, “likened the butterfly’s pattern to a girl who, disliking having to be in mourning, defiantly let a few inches of a bright dress show below her mourning dress.” Now there’s a story that matches the butterfly’s color pattern pretty darn well.

This naming history speaks to another aspect of the mourning cloak: it is widely distributed across our world’s northern hemisphere, including much of North America and Eurasia.

It’s worth noting that besides being “robust,” widespread, and long-lived beings, mourning cloaks are among Alaska’s largest butterflies, with a wingspan of up to three inches. So they’re easy to see and admire.

Here’s another reason I love mourning cloaks: often, they’re the first butterflies I see in spring, a welcome sign that winter is indeed giving way to our warmer, more colorful and enlivened seasons. My first glimpse of a mourning cloak is always reason for celebration. (Another early spring butterfly is the Milbert’s tortoiseshell, also a beauty whose color scheme mixes brown and orange. More about tortoiseshells another time.)

The reason that mourning cloaks are able to appear so early in spring is this: they overwinter as adults. To survive Alaska’s coldest months, the butterflies enter a state of hibernation or “winter diapause” while employing a form of what scientists call “cryopreservation.” In short, they flood their bodies with antifreeze-like chemicals.

The mechanism is apparently similar to what wood frogs use, except in the case of mourning cloaks (and many other insects), those chemicals keep their bodies from freezing, even at temperatures far below 0 degrees Fahrenheit (meanwhile wood frogs, as I’ve written elsewhere, freeze solid to make it through winter).

Mourning cloaks go through this seasonal transformation after finding a spot where they can shelter for the long winter months. Then, when their bodies warm sufficiently at winter’s end, you might say they “spring to life.”

All of this strikes me as yet another of nature’s many miracles, a form of natural magic if you will.

I suppose I should remind readers that all of this amazing butterfly behavior is simply a small part of an even greater mystery. Mourning cloaks, like other butterflies, go through several transformations during their lives: from egg to larval forms—which we more commonly know as caterpillars—to pupal stage (in which the insect forms a chrysalis) to adult butterfly.

While we humans tend to notice the more aesthetically appealing and mobile adult forms, mourning cloak caterpillars are in their own way quite striking. They’re described as either spiny or spiky in appearance, with black bodies and a line of eight red spots that run down their backs—what scientists call “aposematic” or warning coloration that signals to predators, “leave me alone.”

Besides the red spots and black spikes that extend from their backs (another deterrence to predators), the caterpillars are also covered with shorter bristly hairs and tiny white speckles. As one online story notes, because of the spines, some people think the caterpillars might sting, but they don’t.

For most of the caterpillar stage, the larval forms stick close together while “voraciously” feeding on the leaves of bushes and trees, for instances willows, aspens, cottonwoods, and birches, all of which occur in great abundance within the Anchorage area.

The caterpillars eat and eat and in all this eating they grow to about two inches long (during this time they pass through several “instar” stages, while shedding their skins four times to accommodate the rapid growth).

Apparently the caterpillars don’t move much until it’s time to pupate. Then they scatter from where they’ve eaten and “pooped” prolifically, and find branches or other places from which to pupate.

According to Canadian outdoors writer Doug Collicutt (the source of much of this life-cycle information), “the caterpillar will spin a small anchor pad of silk, attach it’s hind end to the pad, then hang, head down, for about a day. (‘Going J’ we call it, as it hangs with its head down but curled up like the letter J). Then the caterpillar sheds its skin one last time to enter the pupal stage. The pupa wriggles out of the caterpillar skin and works a small hook-like appendage (the cremaster) into the pad of silk to firmly anchor it in place. In several hours it will have hardened into a spiky grey chrysalis.”

After 10 days to two weeks, a mourning cloak butterfly will emerge from the chrysalis and remain in an upside-down position for an hour or two while its wings dry out and “inflate.” Then the adult flies off in search of food and love. Or sex.

While the caterpillars are ravenous eaters, mourning cloak butterflies are daintier feeders. My sources state that they prefer sap or decaying fruit and will sometimes seek salts and other nutrients from mud puddles or even animal scat.

I’ve seen butterflies of different sorts gathered in moist, muddy areas numerous times over the years, but until this spring I had never noticed them sipping on sap.

On an April walk along Chugach State Park’s Turnagain Arm Trail, I noticed several butterflies—both mourning cloaks and tortoiseshells—perched near the end of a broken cottonwood branch that hung over the trail. Upon closer inspection (after my approach had caused the butterflies to temporarily scatter), I noticed a dark moist stain on the branch. I guessed that this was a sap seep and that the butterflies had gathered to drink from it. After all this research I’ve done, I’m now certain of it. Yet another personal discovery.

I don’t think I’ve ever seen as many mourning cloaks (and tortoiseshells) flying about the Anchorage-area landscape in spring as I have this year, from the Turnagain Arm Trail to Kincaid Park. It’s been a pleasure, to share their bright and energetic company. By now, many of them have likely mated, the final act of a long-lived butterfly life that may last 10 months or more (of course several of those months are spent in winter hibernation).

I suppose it was this year’s explosion of mourning cloaks, and observing them on the cottonwood sap, which finally prompted me to learn more about their remarkable lives—and then to share some of this new-found knowledge here, the story of one more amazing northern critter that is so often overlooked.