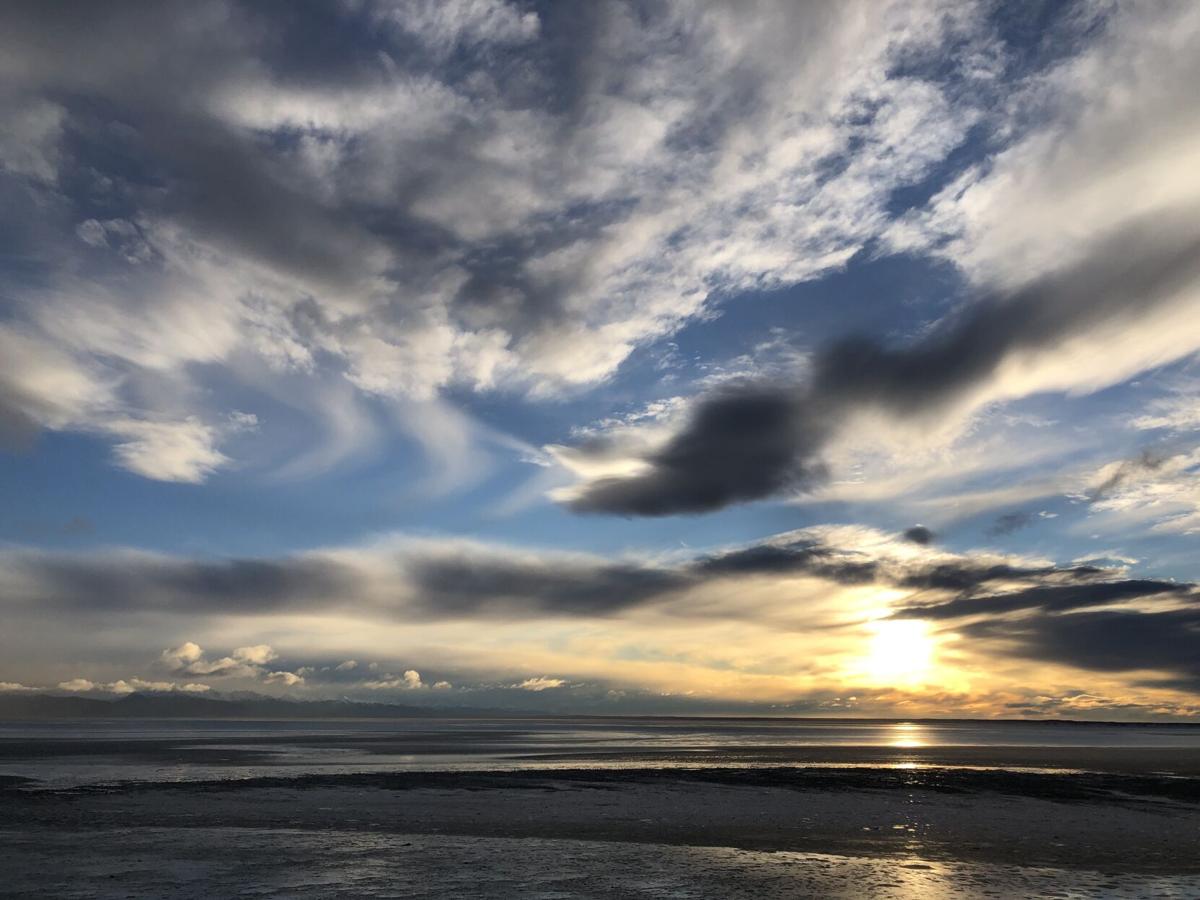 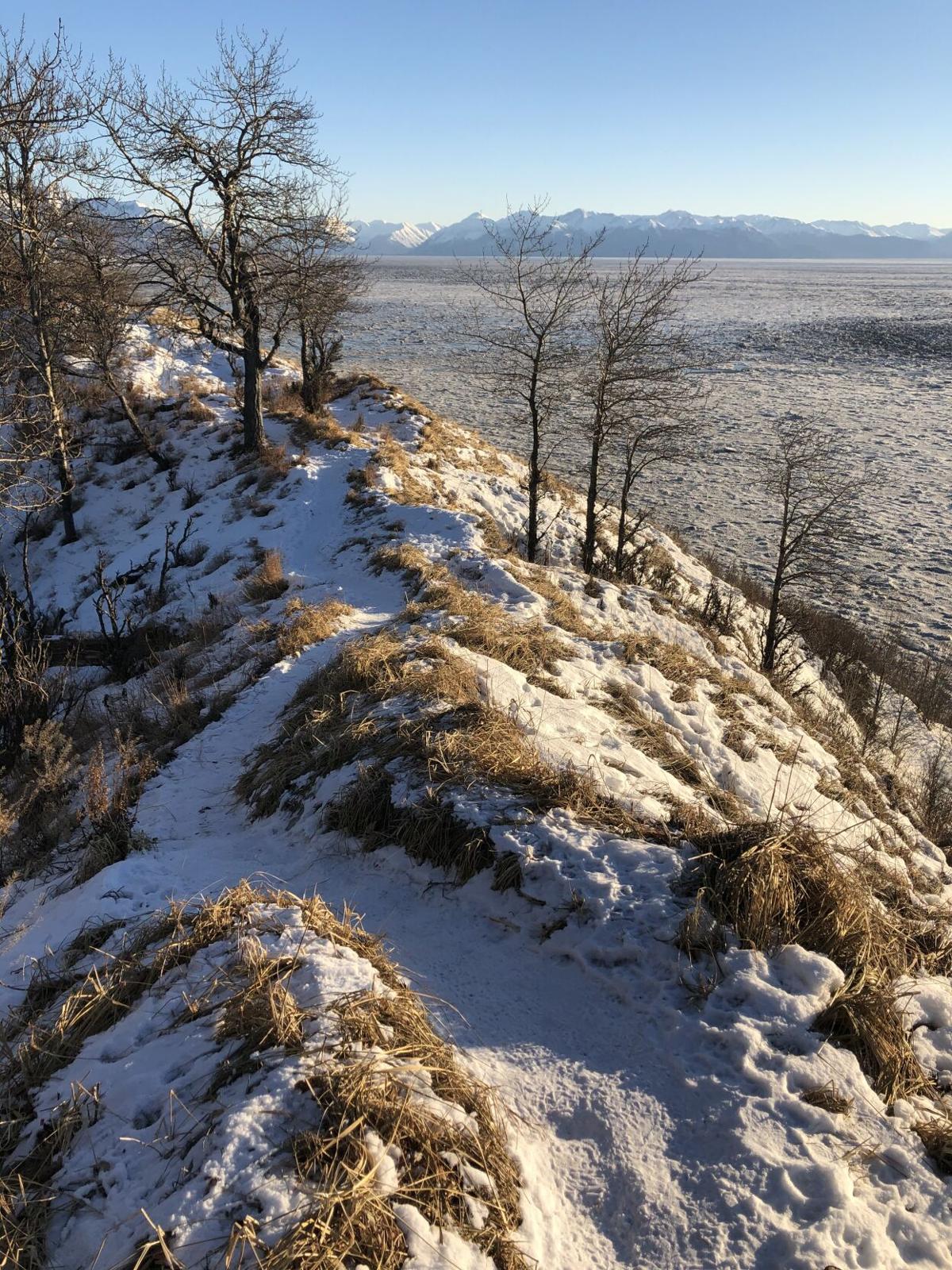 It’s a cold and clear mid-winter day, one that brings expansive blue skies, single digit temperatures, and a light breeze. My day’s commitments won’t allow an extended trip into the Chugach Front Range, so I look closer to home for a hiking destination.

My mind immediately goes to a pair of trails that are personal favorites. One begins at the southern edge of the Anchorage Bowl, the other at its western extreme. Both trend southeast to northwest along the coast, which means that on a blue-sky day they get abundant sunshine in mid- to late afternoon even in the depths of winter (and into the evening, when the daylight lasts that long).

On this day I choose Kincaid Park’s Bluff Trail (my other option being the Turnagain Arm Trail), a narrow, rolling footpath between two and three miles long, which roughly follows the tops of sand dunes that form the park’s western borders. The dunes are largely covered by woodlands and meadows now, but at the trail’s southern and northern extremities—namely the park’s motocross area and where it drops to Kincaid Beach—the huge piles of sand are clearly evident.

I lived in Anchorage for close to a quarter-century, maybe even longer, before I “discovered” the Bluff Trail. Actually I was brought there by a friend who knew Kincaid well. Though I’d skied at Kincaid a few times over the years, I’d barely explored its trail system on foot until a change in life brought me to the Turnagain neighborhood in 2006. Nowadays it’s a place where I walk with Denali (and occasionally human companions) dozens of times each year, in every season.

I don’t know the Bluff Trail’s history and couldn’t find its origins during an online search, and I would love to hear from anyone who knows its roots. I suspect the trail pre-dates the park, established in 1978, perhaps by decades. But I do know this: it’s a narrow footpath that is best explored by walking, my favorite way to get around these days.

I’ve occasionally met bikers on the path, though not in winter, when its steeper slopes can become icy. And not so much since Anchorage’s Singletrack Advocates built many miles of trail that wind through much of Kincaid. I can’t imagine any biker is able to do the entire route without walking his mountain or fat bike along certain stretches, but perhaps there are some expert bikers who’ve done so. The online trailforks.com site gives it a “black diamond” (very difficult) bike rating—not the most extreme ranking possible—and describes it as a “pretty gnarly hiking type trail.” I don’t believe my mentioning its difficulty will draw more bikers, because I’m sure the local biking community is very aware of the challenge this trail presents.

As for skiers: well, I wouldn’t be surprised to learn some thrill seekers have done—or tried to do—the Bluff Trail, but given its narrow, winding nature and steep up-and-down path through sometimes thick woods, it seems the challenge would be an extreme and possibly dangerous one, given all the trees one would have to somehow avoid without crashing.

Among the things I love best about the trail, especially during Anchorage’s cooler (and coldest) months, is that much of it “side hills” forested slopes with a southwest exposure. This not only guarantees plenty of sun on a cloudless day, it creates a warmer “micro habitat.” I’d guess the air temperature is sometimes 10 to 15 degrees warmer here than in other, more shaded, parts of Kincaid. (This, of course, can make the trail a hot place to be in summer unless there’s a cooling offshore breeze.)  The trail’s orientation also largely protects it from biting northern winds.

All of that makes it an ideal trail to walk in winter—except after thaw-freeze cycles, when its steeper stretches can become icy and challenging to negotiate, even with ice grippers.

Here’s another thing I love about the trail: especially in mid-week, a walker can find abundant solitude. This is one of the experiences I seek on my hikes. Weekends can be a different story, as I recently discovered while crossing paths with close to 20 people on a cold and sunny Saturday.

Based on my experiences, I’d say more hikers tend to access the Bluff Trail from the motocross (or Jodphur) end. Perhaps that’s because starting at Kincaid Beach immediately requires a sustained, and in places steep, uphill climb.

I’ve never started at either of the trail’s endpoints, but instead prefer to begin my walk at the Kincaid Chalet and then (depending on the season) follow either a ski or single-track trail to the Bluff. I then generally follow it out to the Kincaid Beach and take a short connecting path to the Coastal Trail, which returns me to my car. A few times lately I’ve turned left (to the southeast) and gone to the motocross overlook, then turned around and done the entire trail for a slightly longer hike that takes a couple of hours to complete.

Each season brings its own pleasures (and sometimes, challenges). My favorite times to go are in spring, when green-up is happening, early wildflowers are blooming, and migratory birds have returned to Anchorage; and in winter, for reasons I’ve described above.

Here’s another winter bonus: given the trail’s orientation and the season’s shorter days, when the sky is clear—or even better, partly cloudy—it’s a grand time to watch sunsets on an afternoon hike. And there have been some beauties lately.

While much of the trail passes through forest, substantial stretches at its northern end cross the tops of grass-covered dunes (with trees scattered here and there). While it may be colder and breezier here, it’s also a grand place to get sweeping, 360-degree views. Though it’s not possible to get a completely unobstructed view (that I’ve been able to find) unless one climbs a tree, on a clear day the panorama is among the very best—if not the best—you’ll find in the Anchorage area, because you can see such great distances. (Though the Chugach Front Range presents some magnificent vistas, you don’t get the same grand sweep to distant places.)

Starting at the Chugach Front Range, with your eyes moving to the northeast, you first meet the Talkeetna Mountains, then cross over to Denali and other Alaska Range giants; moving next to the southwest, you’ll encounter a sweep of mountains across Cook Inlet, from the Sleeping Lady, to the Tordrillo Mountains, Mount Redoubt, and far in the distance, Mount Iliamna. From there, moving back east, you see the Kenai Mountains and finally return to the Chugach Mountains.

The views can be equally impressive on much grayer winter days. I’ve stood atop the dunes when dark and distant snow squalls in nearly all directions have shrouded the mountain ranges I’ve described above, those storms stirring in their own right.

There’s more, including the wildlife encounters I’ve experienced along the trail (you’d be surprised how often moose visit the dune tops) and some favorite landmarks along the way. But that seems plenty for now—except the invitation (already implied) to explore this trail if you haven’t done so. If you go in winter, be sure to bring ice grippers. And maybe a thermos of hot tea, in case you decide to stop and sit a while and take in the beauty of the day and the place, both near and far.