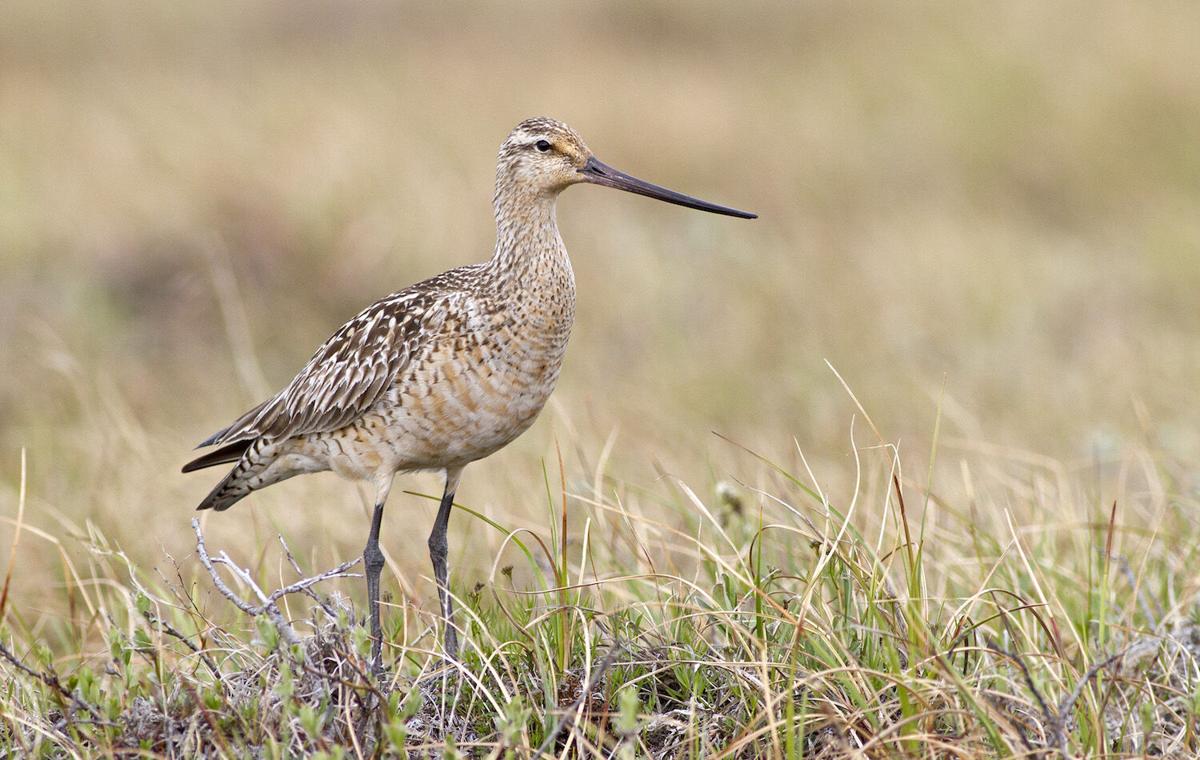 A bar-tailed godwit born in Alaska that undertakes one of the greatest non-stop migrations in the animal kingdom, often flying from Alaska straight to New Zealand in the fall. Photo by Zachary Pohlen. 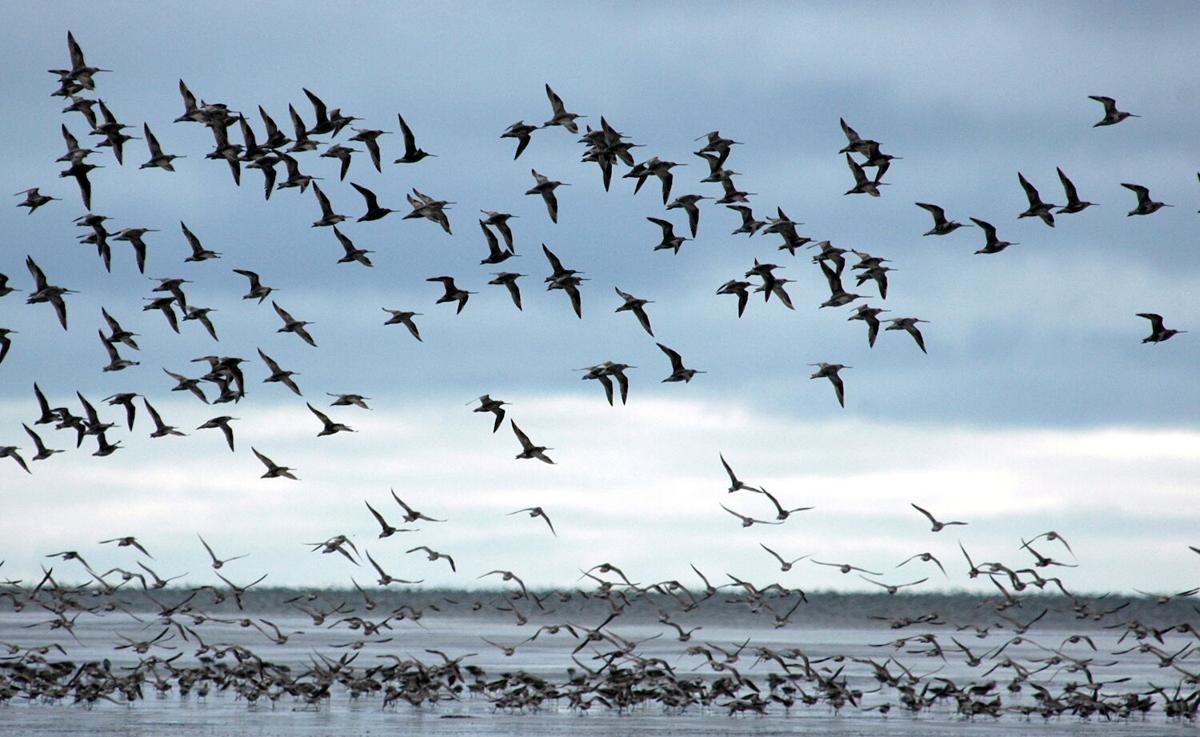 Bar-tailed godwits at a favorite fall staging spot in Alaska just off the mouth of the Kuskokwim River. There, birds gorge on clams and worms within mudflats to fuel what is often a non-stop, week-plus flight to New Zealand. Photo by Dan Ruthrauff, USGS Alaska Science Center. 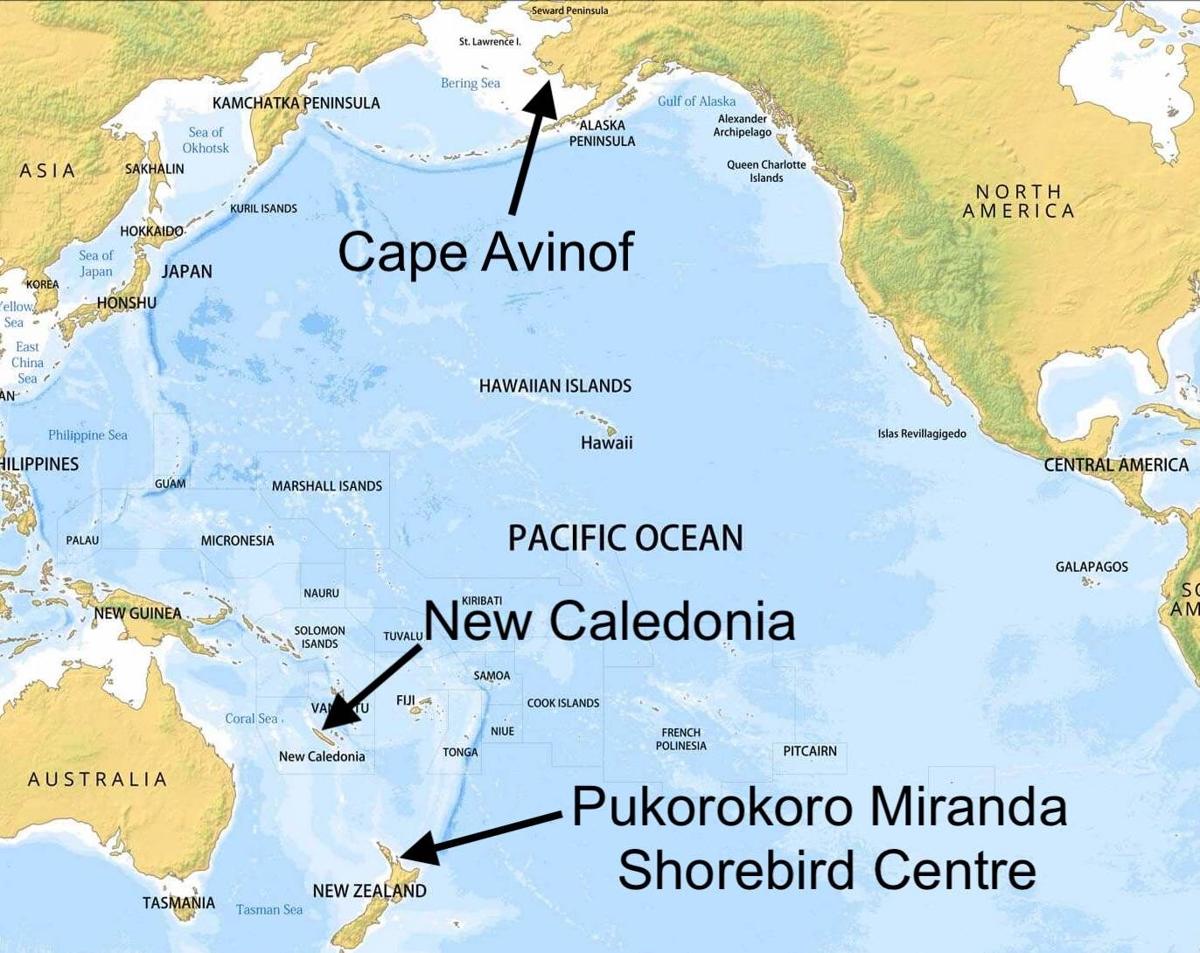 A map showing Cape Avinof in Alaska, where a male bar-tailed godwit returned to feed after failing to reach New Zealand on its first attempt; New Caledonia, where the bird flew on its second attempt; and New Zealand, where the bird finally reached its wintering grounds on Nov. 9, 2021.

A bar-tailed godwit recently arrived in New Zealand on its second attempt to get there from Alaska, after a storm had blasted it back north.

Keith Woodley of the Pukorokoro Miranda Shorebird Centre on the North Island of New Zealand reported that a male godwit carrying a satellite transmitter first left the mudflats near the Kuskokwim River on Sept. 11, 2021.

As Woodley and others tracked it, the bird ran into strong headwinds about 1,200 miles into its journey. It then turned back to Alaska rather than continue towards its wintering spot in New Zealand.

Fifty-seven hours after it left sand shoals off the mouth the Kuskokwim River, the godwit landed there again. I wrote about this rich staging area near Cape Avinof in last week’s column.

The bird then spent 11 days on the Alaska feeding grounds around the crescent sand islands well known to people of the village of Kipnuk. There it again gorged on marine clams and worms with a zeal legendary among bird biologists.

“Although they atrophy their guts prior to migration, the abundance and quality of the clams at Cape Avinof is really phenomenal,” said Dan Ruthrauff, who studies bar-tailed godwits and other birds at the USGS Alaska Science Center in Anchorage. “A paper from 2003 noted that shorebirds have the highest energy assimilation rates reported for vertebrates . . .  A great quote from this paper: ‘The migratory waders we studied include some of the biggest gluttons described in the animal kingdom so far.’”

Re-fattened, the male godwit took off and again flew in the direction of New Zealand, landing 1,000 miles short in the islands of New Caledonia, a French territory. It spent five weeks there before one more leaping into the air. The godwit then flew nonstop to the North Island of New Zealand’s Firth of Thames just east of Auckland, where it touched down Nov. 9, 2021.

“I received a report that the bird has been seen this morning,” Woodley said on Nov. 10.

That male bird is now milling about New Zealand mudflats with another migration superstar born on the Alaska tundra. Earlier this fall, a female bar-tailed carrying a transmitter flew from Alaska to New Zealand — a non-stop eight-and-one-half days on the wing. The bird flew at an average speed of 36 miles per hour, covering 7,580 miles without resting.

The male godwit pushed back to Alaska by winds is a rare bird that did not make the journey in a single flight.

“This bird turning back around to Alaska was a first (of the birds biologists have tracked),” Ruthrauff said. “Remarkably, however, there are relatively few records of godwits on the islands in the Pacific between Alaska and New Zealand. It certainly happens, but it's likely that the majority of godwits make the migration in one go.”

Woodley said some of the 80,000 or so birds in the population probably don’t survive the incredible fall migration, but most seem to.

“Adult bar-tailed godwits are remarkably site-faithful, and many birds that have gone astray have eventually managed to arrive at their original destination weeks, or sometimes months, later,” he said.