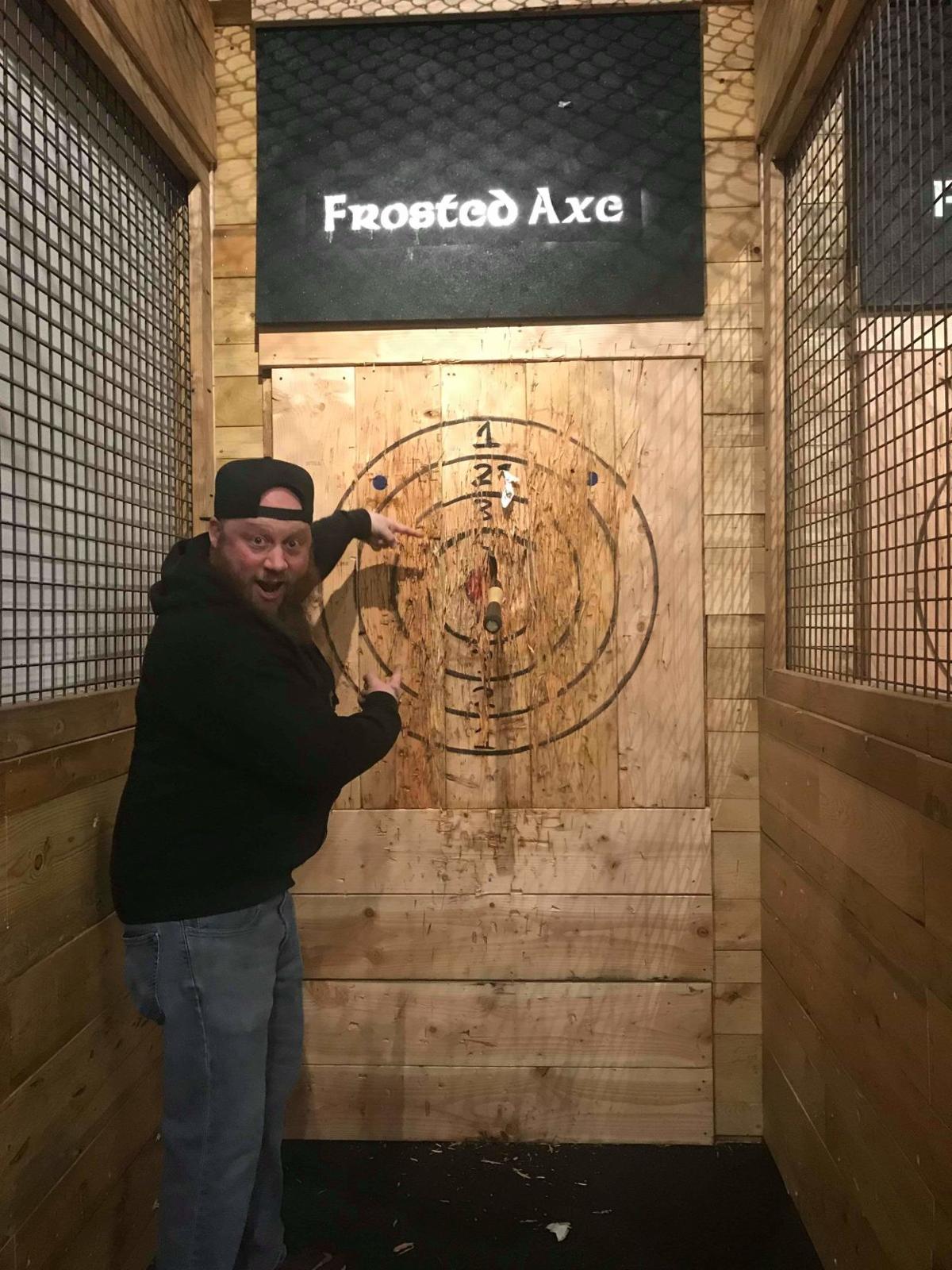 Mike McCormick runs Frosted. He says the venture began out of a mobile rig in May 2019 and upgrading to a brick-and-mortar facility on W Fireweed in October.

After a surprising turnout at the 2019 Alaska State Fair — and over 4,000 served in a single week — McCormick says he knew the market for axe throwing was there.

When I visit the new facility, Mike and staffers Rylee and Grace are cleaning up after a large group event. “Birthday parties, office parties, axe throwing is great for team building,” McCormick says, “With a little coaching, you’ll always see the shy ones having the most fun by the end of the day.”

McCormick says he’s been throwing axes for over 20 years.

“Whenever you go hunting or camping, you bring an axe,” he says. “And whenever you’ve got an axe in the woods, you’re going to end up throwing it at trees.”

Here at Frosted, it’s remarkably safe. Lanes are regulation length for 12-foot throws, and surrounded floor to ceiling with absorbent materials to prevent any bounce back. All axes are regulation size and shape, though Frosted encourages you to bring your own if you’d like. And with over 8,000 customers through the doors, McCormick says he’s proud to report not a single accident.

As daunting as axe throwing may seem, McCormick is a terrific coach. He invites me to try what will be my first time throwing an axe at a target, and he guarantees that I’ll be able to stick the axe on the wall in five throws or less. I watch his demonstration and imitate. My axe hits the wall with a full thud and falls to the soft ground. He suggests minor adjustments and I try again. This time, the edge hits at a funny angle and ricochets. One more slight adjustment. I throw. The axe makes a deliberate rotation and makes a satisfying thunk into the target. They promised success in five throws and delivered in three.

But it’s not just axes; they’ve got shuriken throwing stars and tactical shovels, and I manage to bullseye a shovel on the first try. I am a tool-chucking god among my peers.

Coming soon to Frosted Axe Throwing, via a partnership with Extreme Axe, will be projection games, wherein targets like zombies can be projected onto the screen and then hacked to bits courtesy of your flying axe.

And most importantly, Frosted is seeing what they can do about a beer and wine license. But in the meantime they have a pending arrangement with That Wing Place to take care of catering food and beverages.

Under 8 free. Military 10% off- 20% on Wednesdays. Details at frostedaxethrowing.com