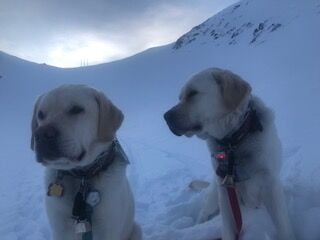 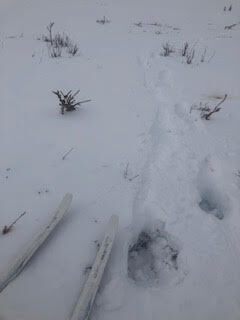 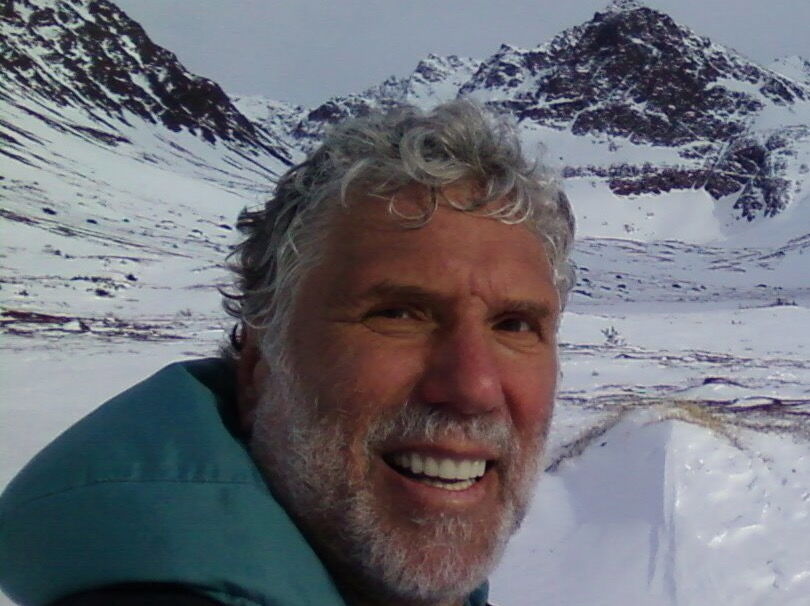 Before she died, Cindy worried I would be lonely after terminal cancer ran its course; so she reserved two lab litter mates at the same kennel from which we acquired our last pair of boys and the pair before that.

Cindy’s last gift, Buster and Montrose, and I have departed Glen Alps near Anchorage by first light into the Chugach Mountains almost every skiable day since they were six months old. Before the virus, as after, the boys and I shared the whole Powerline Pass valley with no one at that hour, so I may as well have socially distanced on the moon. Only the occasional moose, lynx, marten, coyote, snowshoe hare or ptarmigan crossed our path.

Not yet three, my boys may have been born domesticated but they lived more like their coyote cousins. They routinely carried for miles moose bone parts they found and later chewed up on the car ride home leaving that new gamy car smell. Each caught and devoured a ptarmigan and a hare along the ski route at one time or another. Both have responded to the cry of coyotes up high by scampering to the rocks beneath Ptarmigan Ridge to pay a visit, I imagined.

I never figured out how they caught their prey because I adorned both with veritable lights and sirens. One dog blinked red around the neck, the other green. Different sized bells that hung from each’s neck sounded loudly and distinctly. Thus I knew which one was where in the dark, and I assumed other critters did too.

I trained them to come, sit and stay by working separately with each. Unfortunately, they did not respond to the more common: “STOP the @&#% whatever the hell you’re doing NOW!”

In mid-March this year, one of my feral boys caught a porcupine near Ptarmigan Peak, and the crime quill scene sickened. The vet removed countless pointed barbs from their faces and underneath their tongues, and she prescribed a high fat diet to flush the ones they ingested. Cindy’s last gift proved expensive training works in progress.

On March 25th I altered my route and skied the north side of the valley close to the power lines. It was a super winter for both cold and snow, but the previous few days the temperature touched 40.

About 7:15 halfway to daylight, we about halfway to Powerline Pass passed the yellow “43” air traffic sign near power pole 15. The boys suddenly took off from above on my left like nuts down and to my right barking. Buster never before ran across my skis like he did this time just because he saw small game.

Suddenly I saw the grizzly bear run from around a raised elevation stand of fir about 100 yards on my right — BIG. My first impression was the grizzly’s pronounced large hump above his shoulders. At first he ran away up valley, so incident averted, I thought. But my guy Montrose ignored my “No no no no no” command and gave chase before stopping on a mound of rocks and snow to bark at him defiantly. The bear turned and ran at Montrose, but the boy would not budge. He looked fearless barking from his position on the slightly higher — if shaky — strategically snowy ground.

I skied frantically toward Montrose shouting my "no’s" when the bear suddenly turned charging toward me instead. The griz must have thought I ran at him because from his point of view almost directly beyond my guy, I was.

I did not have bear spray with me, so I waved my ski poles wildly overhead in the hope the bear would think me bigger than I was. All the while I yelled “No no no no no no!” at the dogs I could not see Buster, but I could hear him barking from behind the fir trees.

After another second, the bear turned away from us and ran up valley, then up Wedge Ridge to our left. He never bluff charged closer than 75 yards, but closer than I would have liked nonetheless.

Turned out the bear had been on a kill. Montrose found a porcupine carcass that laid atop a HUGE hole in the hard packed snow the size of an adult human gravesite. I surmised the griz applied his massive shoulder strength to dig it up alive from its hiding place before he killed it.

On the way back from the bowl beneath the pass, I found deep holes in the snow that could not bear the bear’s weight but bore sunken grizzly tracks instead. Montrose smelled one, then raised his head immediately and growled softly as he looked in the direction of the kill site.

I have skied the powerline many hundreds if not thousands of times since the 1970’s and never before encountered a griz, let alone during hibernation season, but you don’t pack pepper spray for the 999 times out of 1,000 you will not need it. You pack it for the one time you might.

Lesson learned, I strap the bear spray to my belt even when the grizzlies are supposed to be hibernating. Next time, I will use it to disable my boys, and we will all be fine.