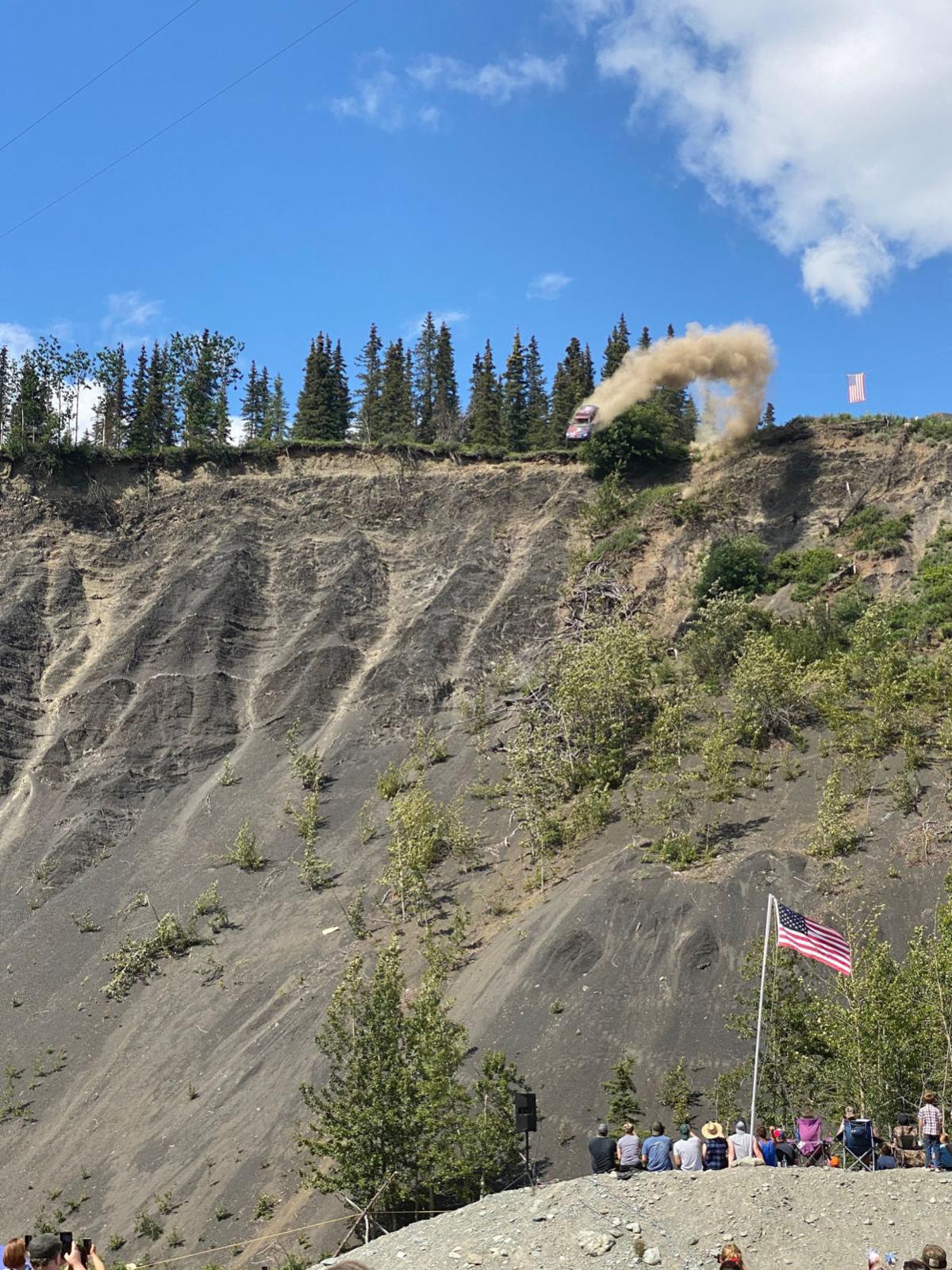 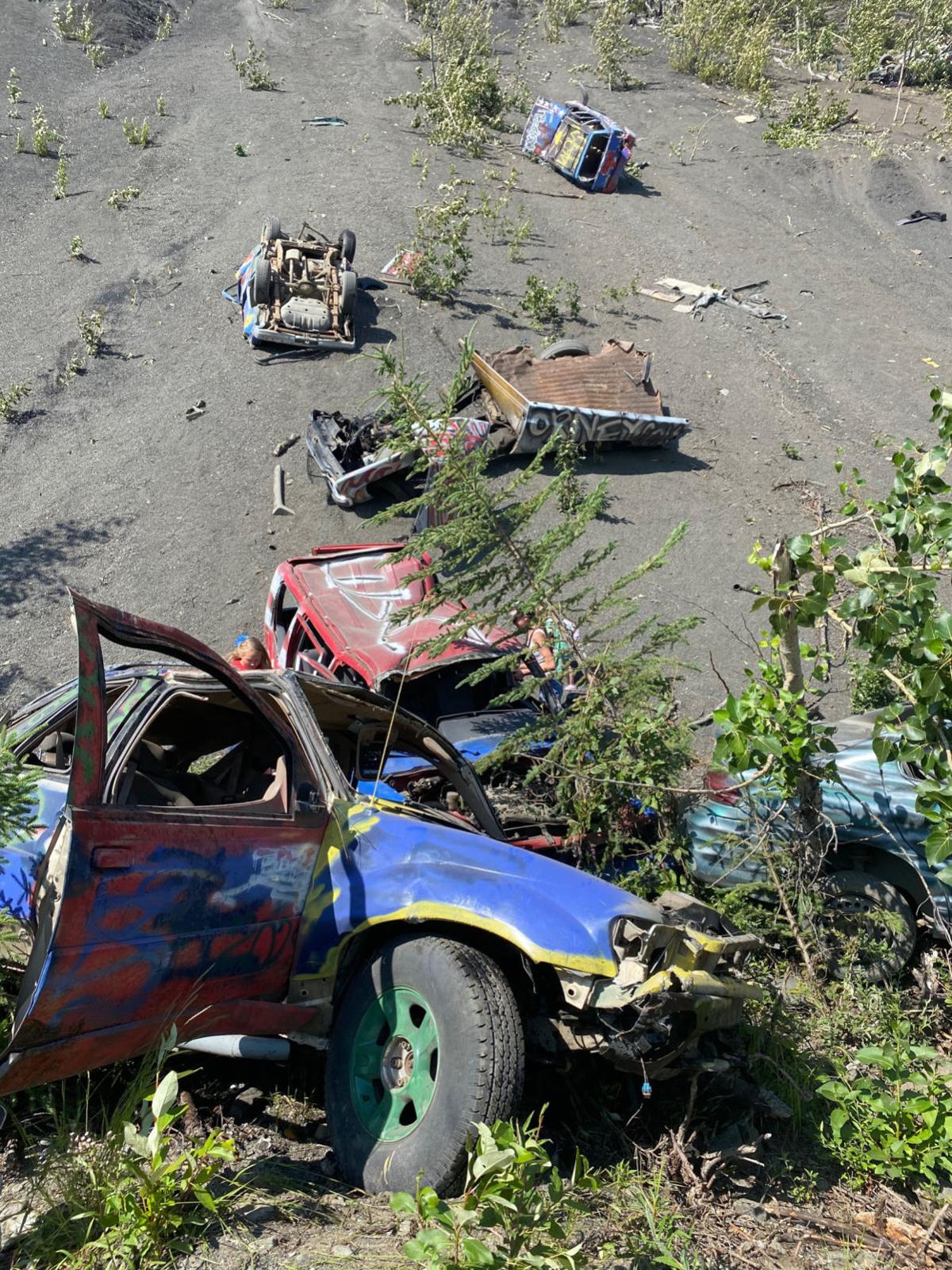 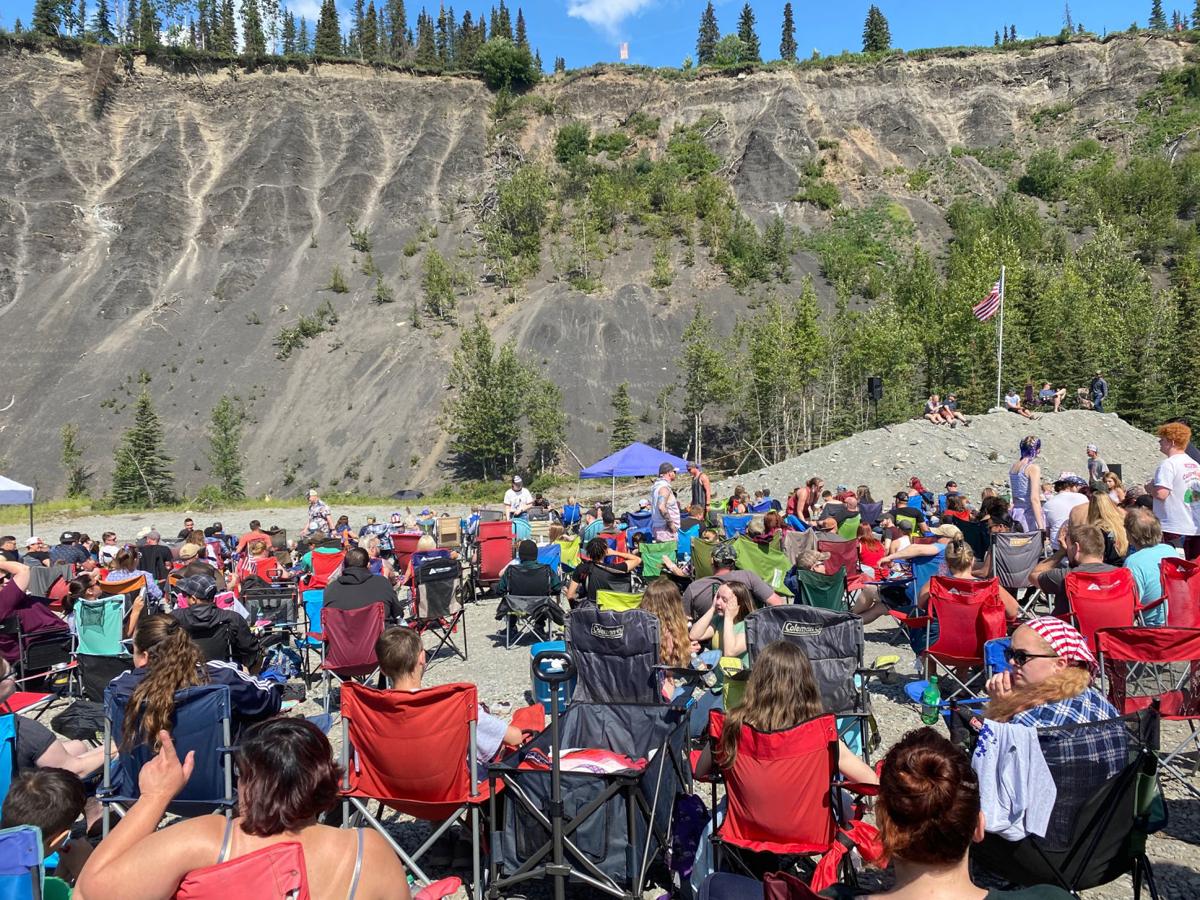 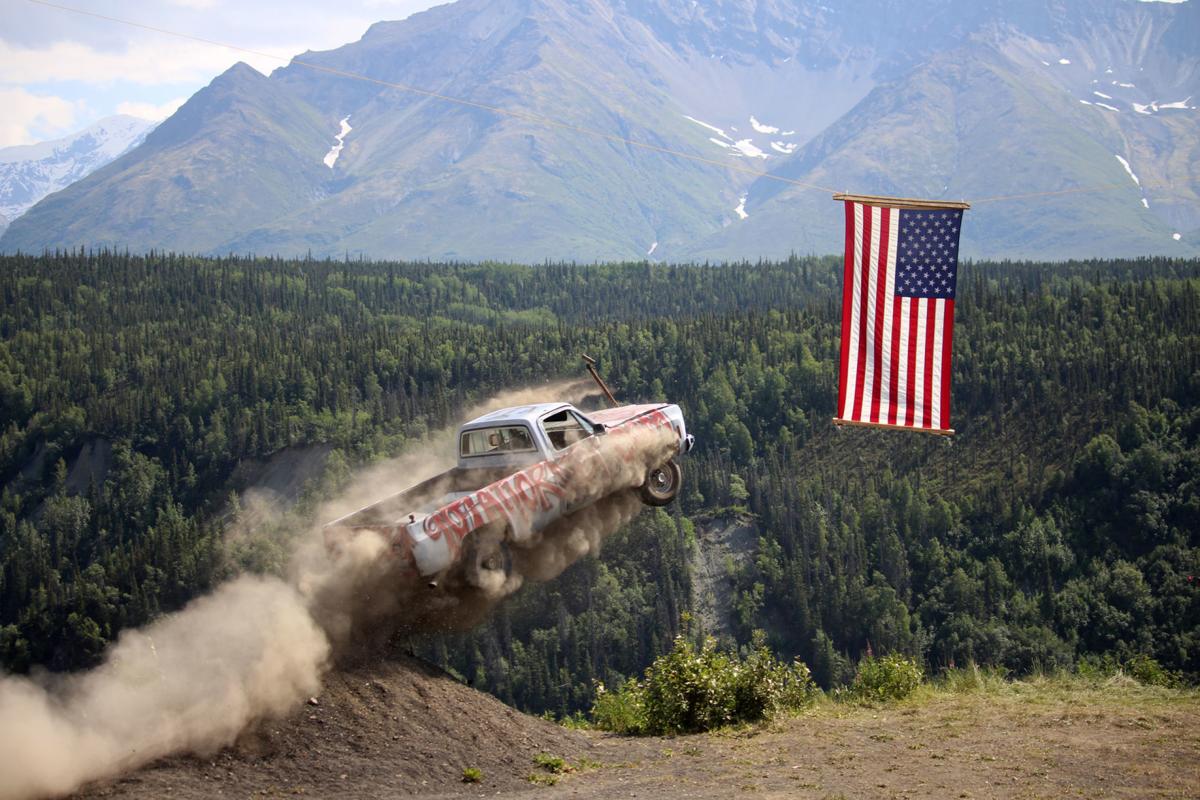 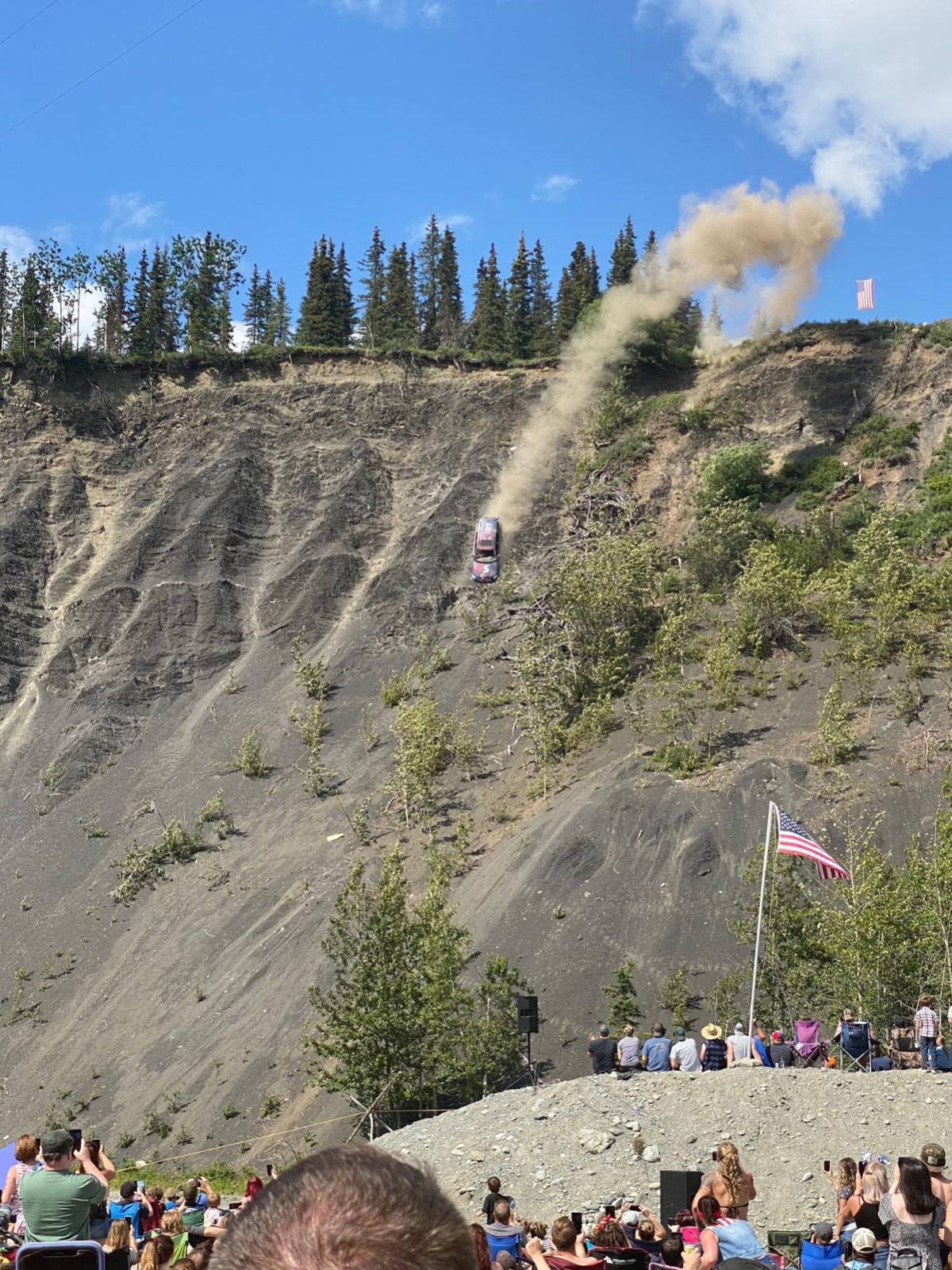 The appeal of the annual Arnie’s 4th of July in Glacier View, which entails launching car after car off a bluff above the Matanuska River, is both easy and difficult to nail down.

The spectacle of vehicles hanging in the air before plummeting to the dirt and bursting to pieces is definitely thrilling. It’s the exact opposite of responsible car ownership and the type of thing you usually only get to see in the movies.

But is it worth driving 60 miles (90 in the case of Anchorage-ites) and waiting hours to see?

Just judging by crowd size this past weekend, clearly it was.

Dorothy Hrncir, a member of the clan responsible for the annual spectacle, now in its 15th year, said they didn’t sell actual paper tickets so there isn’t an accurate headcount. Last year they guessed something on the order of 3,000 people attended and this year the crowd looked to be about the same size, if not slightly larger.

Most people interviewed in the crowd said that they came to see cars fly and, as they waited, were enjoying the scenery.

“It’s beautiful. It’s Alaska,” said Brian Bonker from his spot along the riverbank.

Paige Daugherty brought her 4-month-old with her to the event, along with two of her friends. The three of them work in bars in Anchorage and don’t often get weekends off. A family-friendly event on a day they were all off was enough to propel them the 90 miles out to Glacier View.

“I guess we came for the experience,” she said. Her friend, Fiona Cerny, concurred.

“You know I’ve been hearing about that for about five, six years, sounds … awesome!” Cerny said.

A few feet from them, Bob Thomas sat in a camp chair with his family. This was Thomas’ second car launch but the first had just been one car. He said he’d known Arnie Hrncir, Dorothy’s father-in-law, for more than a decade and had been invited out every year. Still, showing up this year was a fluke.

“I was one my way back from Eureka and I just happened to drop by,” Thomas said. “Arnie said, ‘oh we where just getting ready to start to launch!’”

Dorothy said that the event’s explosive growth has been relatively recent.

“The last four years have been really big. The last two especially,” she said.

That spike seemed to coincide with the event’s appearance on a national cable television show — Roadkill, currently on the Motor Trend channel — whose hosts had decided to buy two junky cars locally, sail them off the bluff, then see if they could build one functioning vehicle from the wreckage. Plans changed.

“They didn’t realize the destruction that comes from having two cars launched off a cliff,” Hrncir said.

Personally, I first heard about the car launch when I worked full-time at the Frontiersman and our photographer came back with some photos he’d shot. It was one of those annual events I always wanted to attend but never did. Then, a year and a half ago, Hrncir — who teaches 7th and 8th grade language arts —agreed to take me on as a student teacher as I worked on my certification. She’s proud to be from Glacier View and talks about it a lot. Having heard all her stories, this summer seemed the perfect time to go.

The event’s front-man, though, is definitely Hrncir’s father-in-law. Arnie bought the Hick’s Creek Roadhouse in 1996. The roadhouse wound up getting swallowed up in a road expansion project and with the money from the state buyout, Arnie and his family bought the land with the bluff.

“We had a bluff and we had a car that we didn’t like and we got tired of messing with it,” Arnie says of the 2005 origins of the car launch.

Dorothy Hrncir says she thinks it was her husband, Arnie’s son Dustin Hrncir, who had the original idea to launch that Volvo — which belonged to her mother-in-law and had barely survived hitting a moose — off the bluff.

Dustin — whose skills as a handyman/tinkerer/mad scientist his wife frequently praises in conversation — figured out how to do it without going off the cliff himself. It involves driving like a banshee toward the cliff a handful of times to see how the car pulls, then securing the steering wheel with a ratchet strap to make it go straight.

“It’s the most terrifying thing to me when he drives at 90 miles per hour in these cars that we know are headed to the dump, towards the cliff,” Dorothy Hrncir said.

For some cars, that’s all they do; strap the wheel, put a weight on the gas pedal and let it fly. But, a few years back Dustin masterminded a plan to make it easier, installing a length of railroad track leading up to the ramp to guide cars to their demise. Even that, though, isn’t fool proof.

“Sometimes we’ll say we’re going to launch one and it’ll run off the track and hit a tree,” Dorothy said.

In addition to a possibly record crowd size, this year also saw a record number of cars launched — they’ve never done 11 before. Exactly when they stopped limiting it to friends and family and started inviting just anybody to attend is shrouded in mystery — neither Dorothy nor Arnie could recall the year. But last year was the first at which they brought in food vendors.

“Before that we would feed everybody ourselves. We had big lines,” Dorothy said. But, eventually, that got to be too much. “At one point I was leading a horse up a hill with a crate of pulled pork sandwiches and I was like, ‘this is not sanitary.’”

It’s not easy to entice vendors all the way out to Glacier View. It’s quite a drive. But the crowd size probably makes it worth it. Arnie said that a brewery owner who attended one year and saw all those people asked him if he could set up a beer garden the next year. It would have been profitable, Arnie said, but he eventually decided against it.

“This is a family event,” he said. “Once you turn that page you’ll never get back what you had.”

Even for a family event, though, inviting 3,000 to your property is a daunting task to be sure. Both Arnie and Dorothy, speaking the day after the event, professed to have had a very hectic week.

He relayed a story about reaching the end of his rope with a man who was camping on the property the night before the launch and got slightly out of hand.

“I just ripped into them,” he said. But, Arnie admitted, his reaction was out of proportion. Later, he saw the man at the event.

The guy ended up helping Arnie out with a slight bit of crowd control when people had crossed over a rope set up to keep people a safe distance from the bluff. Arnie also had to get on the mic at least once during the event when, after all the cars launched, folks clambered up the bluff in search of souvenirs. Cars in the loose sand up there might roll down on top of them, he told them on the mike, urging common sense. Otherwise, he said, he trusts the crowd to police itself.

“Let’s not micromanage,” he said, but, if he has to talk to you, like he did to a group of guys drinking through what is colloquially known as a beer bong, “you get one warning.”

Dorothy said that literally anybody in Glacier View willing to help is drafted into the crew for the event, handed a T-shirt and paid some money at the end. She said she just got a new neighbor this summer and met him the day before the event.

“Do you know what’s happening here tomorrow?” she asked him. The man did not. “Oh, 3,000 people are probably going to come to watch cars get launched off a cliff.”

He asked if they needed any help.

And the work, even after everyone leaves, still goes on. They clean the cars up every year. Prior to the launch it was difficult to tell just where the cars usually land, the family had left it so pristine from prior launches.

“There are a few community members that aren’t such a fan but it’s one day a year,” Dorothy said. “And it bring so much business to this community.”

People who come to watch cars fly will come back later in the summer to camp or ride the local zip line or take a river rafting trip or an ATV tour.

Arnie backed up that assessment, saying that Glacier View is among the most overlooked destinations in the state.

As for why he keeps up with the event, launching cars year after year and letting it grow to such proportions, Arnie said it’s really the reactions he gets from the people who come, reactions like the one he got from a mountain of a man who came up to thank him afterward.

“He was in tears he said, ‘you don’t know you just don’t understand what today was,’” Arnie said. “His son came up to me and he was like 14 or something… [and he said] ‘I’ve only ever seen this kind of stuff on TV and this is like the best day of my life!’”

Andrew Wellner is a former Frontiersman reporter and current teacher in the Matanuska-Susitna Borough School District. His son, Ivan Wellner, is in the 4th grade and helped conduct interviews for this report.