The Alaska Institute for Justice’s (AIJ) mission is to promote and protect the human rights of all Alaskans, including immigrants, refugees, crime victims including survivors of domestic violence and sexual assault, and Alaska Native communities by providing critical services to these underserved populations through legal representation, language access, training and educational programs and advocating for climate justice.

This series of six articles, Human Rights: Legal, Social, and Climate Justice, explores the origins of AIJ 16 years ago, the various programs it offers, and its impact on our state in its unwavering devotion to preserving and defending the rights of all Alaskans.

Martin Luther King Jr. once said, “Injustice anywhere is a threat to justice everywhere,” and that philosophy is echoed in the Alaska Institute for Justice’s Pro Bono Asylum project, spearheaded by attorney Dan Rodgers. 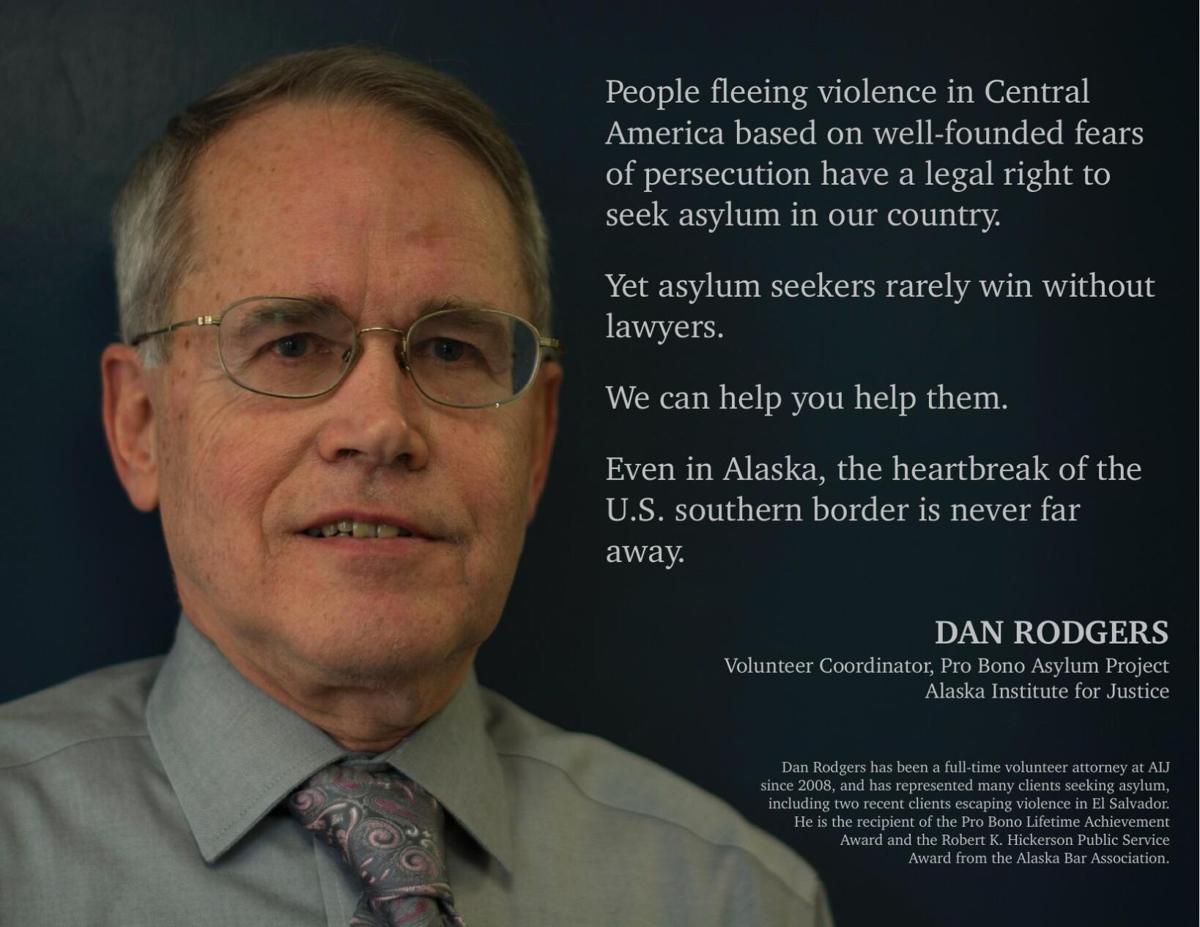 A former corporate lawyer for Conoco Phillips, Rodgers began taking on pro bono asylum cases in his spare time in 1998. After retiring from his day job in 2008, he’s been representing clients in asylum and other pro bono immigration cases full time and helping other attorneys do the same.

Rodgers personally has worked on 30 asylum cases and has mentored dozens of attorneys through another 50.

Asylum law is much more than an interest, for Rodgers, it’s a dedication born of a passion for justice, and helping people escape peril and persecution in their home countries.

From his first case, involving a man from El Salvador who had fled civil war, he was hooked.

“What intrigued me was that I didn’t think much about immigration or asylum when I took that first case, but I saw what a big difference it made in the client’s life, and what a big difference having legal representation makes,” Rodgers says. “These are real people, not just a philosophical notion of due process. I want them to be safe in the United States.”

The system is far from perfect and it is ever-changing, Take court hearings, for example. Since 2017, immigration court hearings are conducted via video feed which, although functional, is not ideal for clients whose safety is on the line should their asylum request be denied, Rodgers says.

“Immigration court is like a capital case in a traffic court, it’s not a criminal proceeding, it's a civil proceeding,” Rodgers explains. “Immigrants in court do not have attorneys provided for them, there’s no public defender. Having a pro bono attorney makes all the difference in the world. Statistics show that the chance of getting deported is magnitudes higher if you don’t have a lawyer, as this is a very complicated area of the law.”

Immigrants can qualify for asylum status in several ways, Rodgers says. “The gist of asylum law is that you have to show that the seeker has a well-founded fear of persecution based on one of five factors: race, religion, nationality, political opinion or membership in a particular social group.”

One recipient of Rodgers’ and AIJ’s Asylum Project’s aid is Ademola Bello, who fled his home country in 2001 fearing persecution and violence.

He was a high school teacher in Jigawa, Nigeria, which was under an exceedingly strict form of Sharia law.

Bello was also a playwright and activist defending human rights and fighting against government corruption, and it nearly got him killed.

In 2000, a 14-year-old student came to Bello for help, sobbing. Her family was forcing her to marry a 77-year-old man. Bello ended up writing a play in protest of the girl’s predicament, and as a result he was beaten, stabbed and kidnapped for two days by religious police.

He went into hiding until he traveled to the Valdez Theater Conference in 2001 to have one of his plays read.

Bello admits he overstayed his visa for fear of violent retribution if he returned to Nigeria.

Eventually, he found the Alaska Institute for Justice and after a hard-fought battle was granted asylum.

Bello, like many asylum seekers, has flourished in this country.

He was the first African student to graduate with a Master’s degree in dramatic writing from the prestigious Tisch School of the Arts in New York, he received a Master’s of Science from Columbia University and works as a public school teacher in New York. This year he has applied for US citizenship, is also applying to law school, and two of his plays are being considered for off-Broadway productions.

“AIJ’s Pro Bono Asylum Project really helped me tremendously. They helped me in navigating the difficult, complex, and cumbersome process of applying and submitting applications for asylum,” he says. “I am eternally grateful”.

Rodgers is quick to point out that he’s not a one-man-show. Part of his role is to recruit and mentor other pro bono attorneys as they navigate the complexities of asylum cases, as he did in Bello’s case, which was championed by former ARCO attorney Conor Hallisy.

Another attorney he recruited to take on a pro bono asylum case is Dave Jones, a recipient of the Bar Association’s 2021 Pro Bono Award, who retired from his position with the Department of Law and began representing asylum clients free of charge in 2018.

One of Jones’ clients was a woman from Central America suffering from domestic violence and gang persecution in her home country. Another is a family with a young daughter facing death threats from a militia group in South America.

These are complex cases, and Rodgers provides advice, offers resources, reads briefs, and guides these volunteer attorneys through what can only be described as an unjust system.

Rodgers’ role is, quite simply, crucial.

Rodgers’ work has not gone unnoticed.

In 2010 he received the Alaska Bar Association’s Pro Bono Lifetime Achievement Award, in 2014 the Robert K. Hickerson Public Service Award, and in 2017 the First Lady’s Volunteer of the Year Award.

For AIJ’s cofounder Mara Kimmel, Rodgers’ contribution to bringing justice to all Alaskans cannot be measured. The time he has spent working on cases and helping other attorneys do the same is extensive, she estimates, and his selfless efforts have helped bring justice to the persecuted.

“In my opinion, Dan Rodgers is deserving of his own sainthood,” she says. “That man has enabled us to shine.”

Kari Robinson concurs. “AIJ is so fortunate to have Dan as a full-time volunteer staff attorney,” she says. “In my 25 years of working in the non-profit legal field, I have never met anyone so dedicated to helping others and their community.”

For more information on the Alaska Institute for Justice’s programs or how you can help support their efforts, visit akijp.org