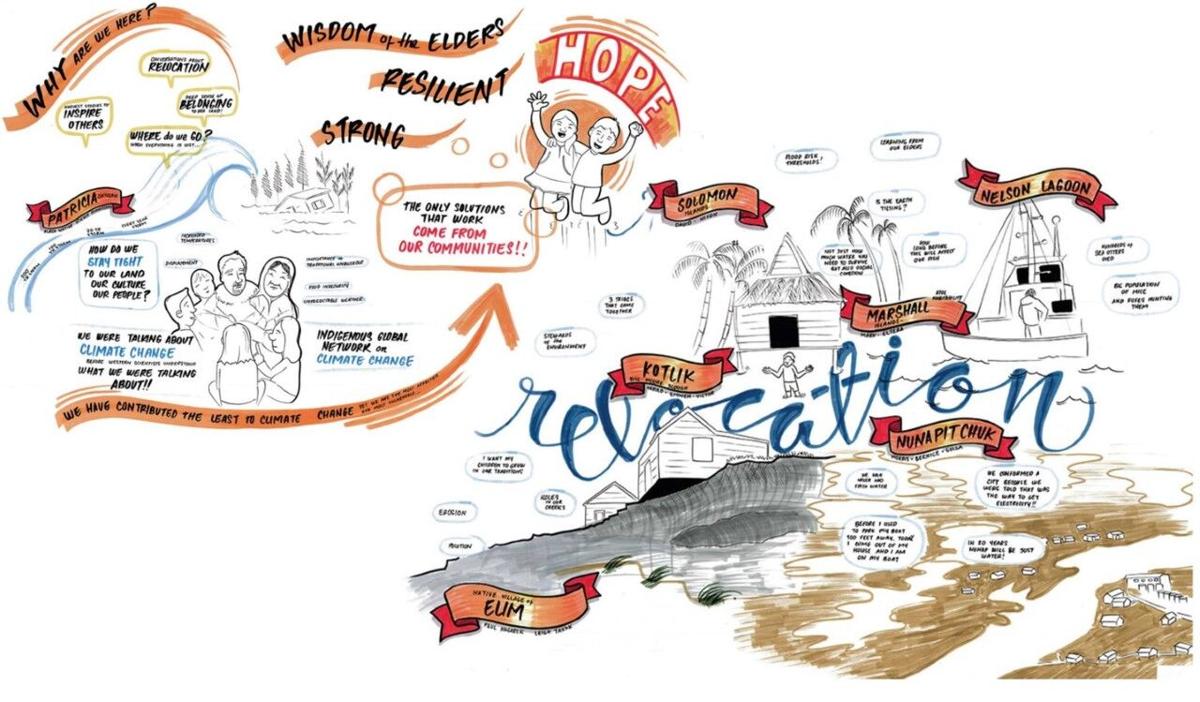 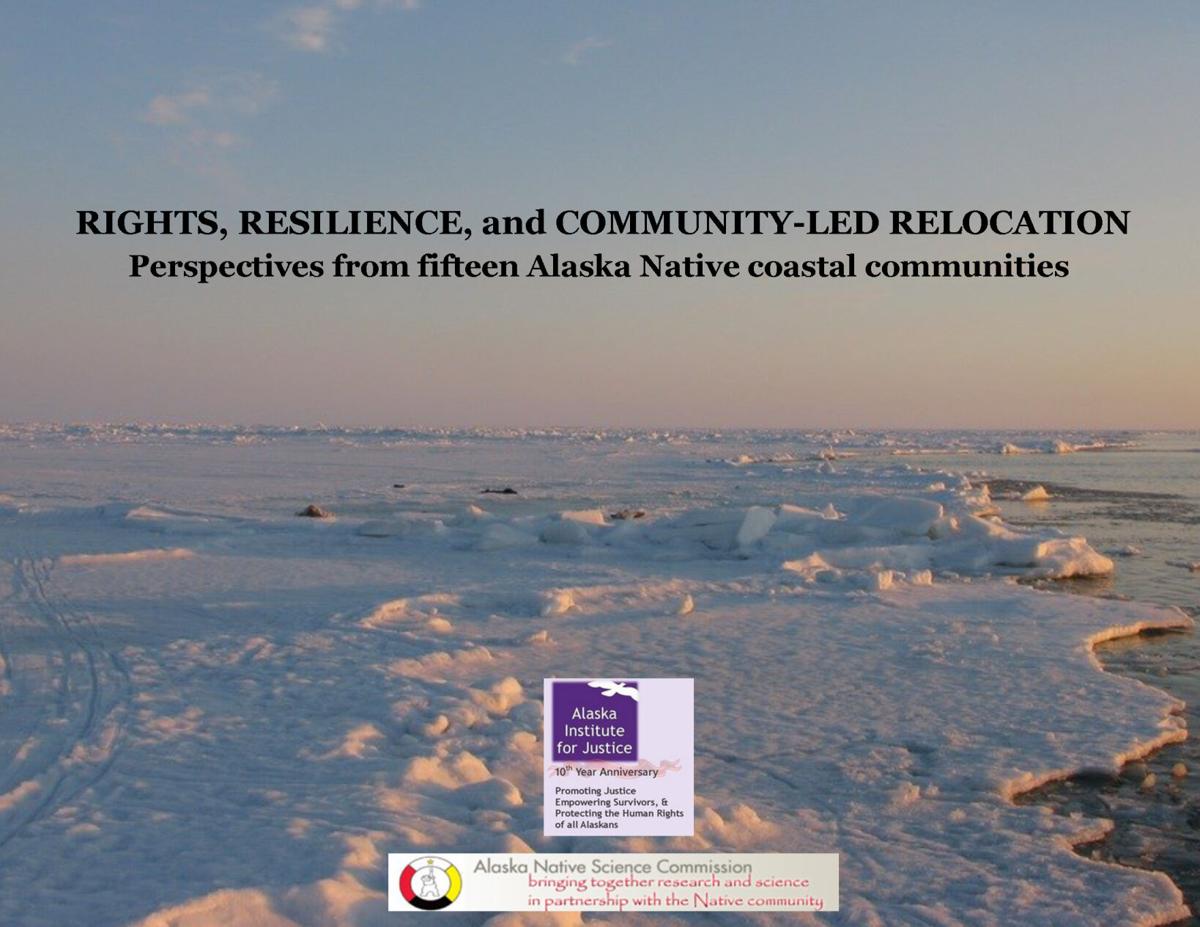 The Alaska Institute for Justice’s (AIJ) mission is to promote and protect the human rights of all Alaskans, including immigrants, refugees, crime victims including survivors of domestic violence and sexual assault, and Alaska Native communities by providing critical services to these underserved populations through legal representation, language access, training and educational programs and advocating for climate justice.

This series of six articles, Human Rights: Legal, Social, and Climate Justice, explores the origins of AIJ 16 years ago, the various programs it offers, and its impact on our state in its unwavering devotion to preserving and defending the rights of all Alaskans.

There’s a Yup’ik term more Alaskans need to be familiar with as our planet continues to suffer the effects of climate change, one that was added to the State Hazard and Mitigation Plan in 2018.

It’s usteq, a single word meaning catastrophic land loss due to erosion, flooding and melting of permafrost. This combination of Arctic conditions is affecting more than 30 Alaskan communities as they struggle to deal with climate change and the looming reality of climate-forced relocation; some have been in this situation for more than two decades. Currently, climate-forced relocation does not come under the purview of any state or federal agency, making it both a social justice and environmental crisis.

The Alaska Institute for Justice (AIJ) has worked with 15 such Alaskan communities in an effort to scientifically monitor thawing permafrost and rising seas, as well as help formulate what a structured, indigenous-led plan for relocation would look like.

Climate change in the Arctic is happening at a much faster rate than in lower latitudes, and it is a harbinger of things to come.

“The Arctic has been called the canary in the coal mine for 20-something years. We’re way beyond that,” says Inupiaq Elder Patricia Cochran, longtime director of the Alaska Native Science Commission who collaborates with AIJ as an Elder and advisor in their work with Alaska Native communities.

AIJ began taking on climate change work as part of its social justice mission six years ago, not long after changing its name from the Alaska Immigration Justice Project in 2012 to reflect a broader vision that included language access and justice issues for indigenous peoples in Alaska, and in 2015, climate change and climate-forced immigration.

AIJ’s executive director Robin Bronen became interested in climate change in 2005 and has become a renowned international expert on the topic in the years since.

Bronen enrolled in the University of Alaska-Fairbanks’ Resilience in Adaptation Program, an interdisciplinary Ph.D. and Master’s program in 2007.

Bronen attended her first environmental conference in Anchorage that year, where the village of Newtok, located on a river delta on Alaska’s western coast, gave a presentation along with state and federal government agency representatives.

The tribal government had voted in the ‘90s to relocate the village of 400 due to the severity of the climate crisis, yet no governmental entity has the mandate or funding to take on relocating an entire community. Newtok’s move remains incomplete to this day.

“I realized that there was this giant governance gap in regard to what the process would be and the federal government’s institutional structure to respond to the needs of an entire community needing to relocate,” Bronen says.

Relocating communities within borders is a hot potato no government wants to touch, and the United States has a particularly horrific track record.

The last time the federal government relocated an Alaskan community due to safety concerns was during WWII and the effects were devastating.

More than 800 Unangans were forcibly removed from their villages in the Aleutians, and their communities were razed to prevent them from being used by the attacking Japanese.

There was little notice and no choice for those being moved. The Unangans ended up in deplorable conditions in Southeast Alaska and were subjected to years of improper housing, unsanitary conditions and insufficient food. Some 10 percent of the population died.

That tragic violation of self-determination and basic human rights is part of what AIJ’s climate change work is hoping to prevent.

To that end, AIJ is conducting community-based and community-led environmental monitoring in partnership with the Woodwell Climate Research Center and the Alaska Division of Geological and Geophysical Surveys, which informs important policy work in creating a governance framework to help communities deal with the impending crisis they are facing.

For Annauk Olin, an Inupiaq linguist and advocate for climate justice who was AIJ’s climate change research director for four years, the situation in the Arctic is not only urgent but personal.

“My mom and my family would go to Shishmaref where we are from every summer, for berry picking, gathering greens, and fishing. Even though I didn't grow up there I feel very connected,” she says. “We live there because we have access to marine mammals that we hunt and when we relocate we need to be able to maintain that connection to the foods that sustain us. Furthermore, we need to maintain our kinship ties and our language,” Olin says.

Shishmaref voted to relocate in 2016 due to the effects of usteq, but there’s no funding for moving its 600 residents. Climate-forced relocation is not covered under the Stafford Act, which determines which disasters are eligible for FEMA funds.

And funding is only one piece of the puzzle when it comes to moving an entire community from ancestral lands to a new home, in addition to the technical aspects of the process of rebuilding homes and infrastructure.

AIJ’s policy work has identified a number of factors that must be taken into account in order to decolonize the relocation process.

Relocation needs to be a decision made by the community, not for the community, the move needs to be planned and not a consequence of an extreme weather event. Human rights, including the right to self-determination, must be of utmost concern, as well as making sure residents maintain their cultural, social and kinship connections.

“There is no question that AIJ has had some remarkable impact, especially in the 15 communities who are active partners with AIJ,” Cochran says. “AIJ has done a real service in providing an opportunity to come together to share information.”

But there’s much work to be done, both to aid communities in peril now, and those who will face a similar dilemma in the future.

AIJ has written to HUD and FEMA in response to the agencies’ request for feedback about equity issues and tribal hazard mitigation planning. AIJ has advocated that climate-forced relocation be considered as a natural disaster and proposed amending the Stafford Act to include “ongoing environmental change, such as sea level rise and erosion, that is predicted to damage or destroy critical community infrastructure and threaten the lives of community residents within three years,” in determining who qualifies for federal aid.

AIJ has also partnered with other agencies in filing a complaint with the United Nations in 2020 on behalf of four tribes in Louisiana and one in Alaska.

“The United States government’s failure to protect the Tribal Nations named herein has resulted in the loss of sacred ancestral homelands, destruction to sacred burial sites and the endangerment of cultural traditions, heritage, health, life and livelihoods,” the complaint’s executive summary reads.

AIJ’s important work on climate-forced relocation continues as our planet, and especially the Arctic, deteriorates at an ever-quickening pace. And although there is frustration, there is also hope.

“I want to leave a world where my grandkids can succeed and have a proper environment, where they do not have to worry about whether their community will fall into the sea,” Cochran says.

“It’s gotta be about hope, it has to be about hope, We have to look at the future to create an environment that is better for people for generations to come. Otherwise, we’re just wasting our time.”

For more information on the Alaska Institute for Justice’s programs or how you can help support their efforts, visit akijp.org