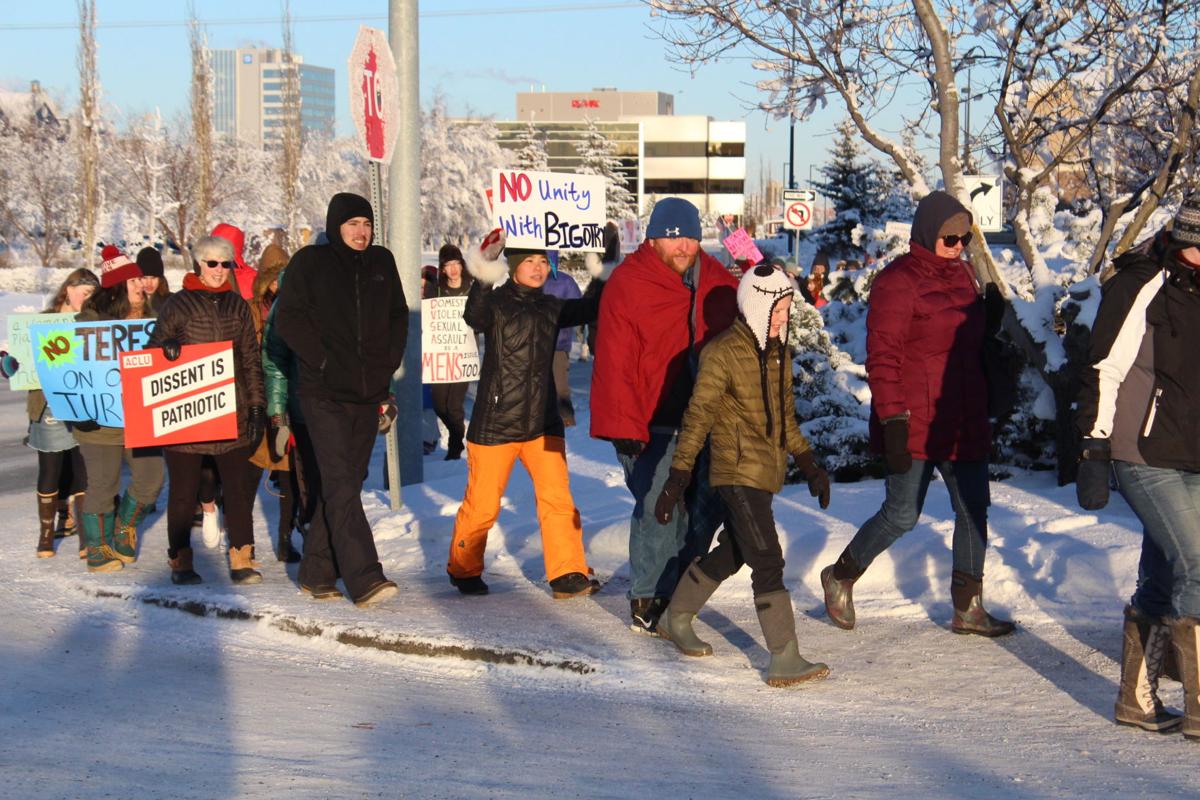 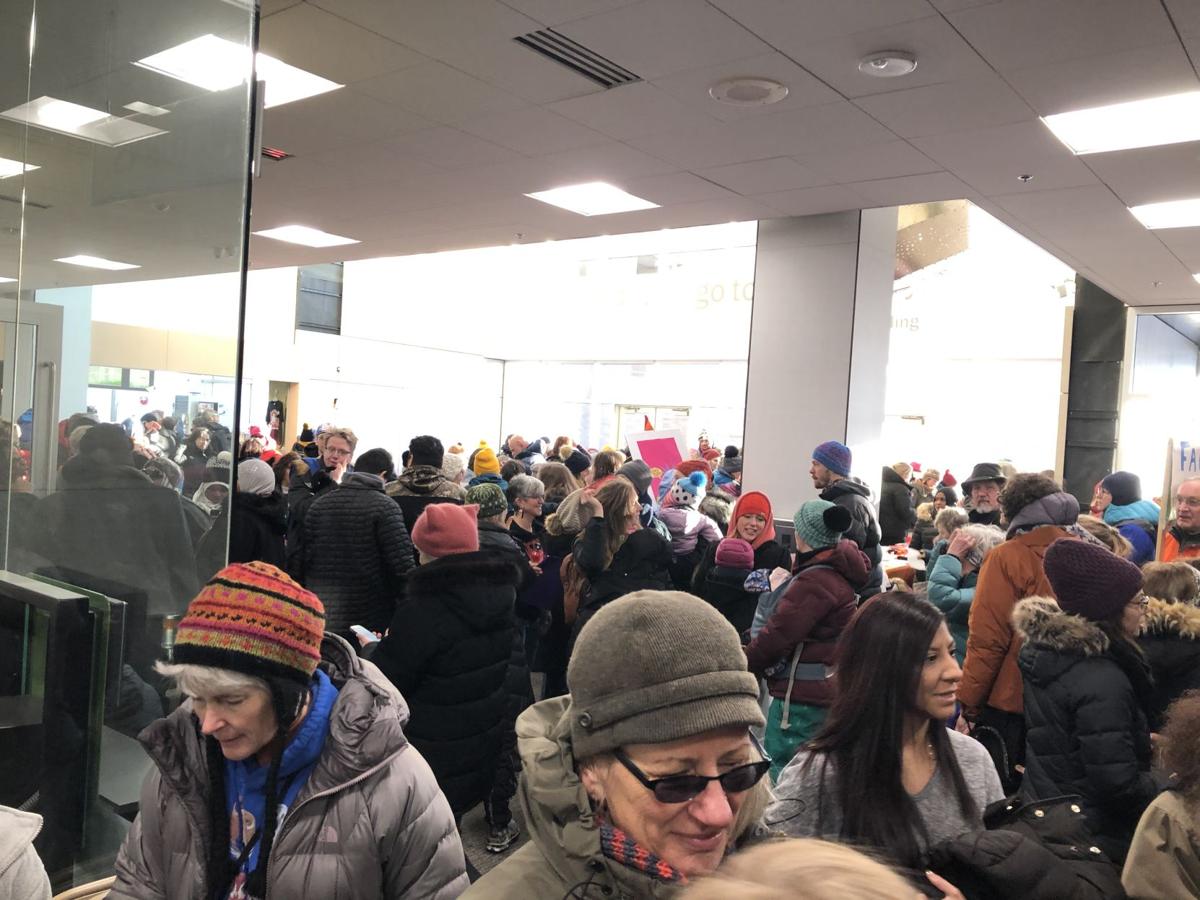 The crisp late morning air in Anchorage was biting, with temperatures still failing to eclipse zero, as a couple hundred people weaved their way around Cuddy Park making a slow procession toward the Assembly Chambers inside the Loussac Library. Jackets, beanies, and traditional Alaska Native regalia intertwined with protest signs sporting messages like, “A Woman’s Place is in the House – the White House!” and “No Unity with Bigotry!” and “In Our America Love Wins.”

This was the scene of the fourth annual Women’s March on Saturday, which took on a new look and more refined meaning in the opening days of 2020. It was born a loud and visceral response to the 2016 election of Donald Trump, with millions taking to the streets nationwide – over 3,000 in Anchorage alone. This year, a smaller crowd of around 250 gathered in Alaska’s largest city, with other smaller gatherings peppering the state in Fairbanks, Juneau, Palmer, Homer, Cordova, Bethel, and Seward.

The first march was a reaction; somewhere to place the anger felt by those who awoke to a historically controversial president with a history of – and rhetoric rooted in – sexual violence, intolerance, racism, and misogyny. Now, as the nation braces for what is already an ugly presidential contest, the focus is renewed as a call to action – both nationally and here in Alaska. Though Trump still is, in many senses, a focal point, issues like equal rights, reproductive justice, and climate change took center stage, and there were as many signs registering the ire towards Governor Mike Dunleavy and local politicians viewed on the wrong end of those issues as those directed at the nation’s commander in chief.

No doubt encouraged by a casual reading of a thermometer, the emphasis was shifted away from the actual march. Instead of shadowing the downtown parade route featured in 2017, Saturday’s demonstration was tucked away at Cuddy Park in midtown, and quickly ushered into the warm belly of the Loussac. There, tables lined the walls hosted by groups like the ACLU, Planned Parenthood, Christians for Equality, First Alaskans Institute, the Alaska Center, and a half dozen more.

The anger is still there, because the abuses are still happening and it has every right to be there.

“We get told all the time that our anger is disruptive, that it is a distraction, that it is not helpful, and that in fact it is divisive and moving us backwards,” civil rights activist Alicia Garza once noted. “Yet nobody ever seems to question: why are you so fucking mad?”

Locally, the same question rarely is asked in coverage of the marches, which have served as an easy target to those wishing to discredit it as partisan, offensive, objectionable, and myriad other adjectives thrust into headlines. This weekend’s events across the state inspired the ‘Must Read Alaska’ outrage machine to fire off an article entitled, “The lecturing vagina defined the 2020 Women’s March,” which opined that, “The theme this year for the protesting women seemed to be a do-over of the well-worn concept of ‘The Angry Vagina.’”

The shallow mockery, when presented in such politically monosyllabic gift-wrapping, fastens itself in one sign captured in a sea of protesters, re-appropriated and robbed of meaning to, instead, distract from issues that would otherwise unite most people.

A string of speakers spoke to those issues; explaining the necessity of the march, their roles in it, and what needs to be done. One of them was Valerie Davidson, the former Lieutenant Governor under Gov. Bill Walker and the first Alaska Native woman to hold that title. Davidson spoke softly and bluntly with an understated, yet profound ferocity as she described a conversation she had several years ago with a group of young Alaska Native women.

“One of the girls said something. And she was 16. The person she was talking about was 14. And she said, ‘Yeah, they need birth control because then they won’t get pregnant if they get sexually assaulted, and we know that’s probably going to happen.’” Davidson paused, reflecting on the power of those words. “And what was so incredibly terrifying about that moment is she said it so matter-of-factly. She said it like, ‘Well, it’s Saturday.’ And when our teenagers know this truth and know this likelihood, it’s our responsibility to do something about that; to change that. Because no 16 year old – no 14 year old – should have the expectation that their friends and their peers and their relatives are going to be sexually assaulted. It is unacceptable.”

The sentiment was echoed by Ruth Miller, a Dena’ina Athabaskan and Russian Ashkenazi Jewish woman raised in Anchorage with roots in the Bristol Bay region. She is a recent graduate from Brown University with a bachelor’s degree in critical development studies with a focus on indigenous resistance and liberation, and she opened the event’s speaking portion with a land acknowledgment ceremony.

Maleika Jones also spoke, identifying herself as an African American Muslim. She told the crowd that she was proud to be a resident of Alaska. “I am passionate about not only my faith and my rights – and I’m also passionate about your faith and your rights. What I’m proud about living in Alaska most is are the values that Alaska has. And, being here for the last ten years, I can testify to it.”

Jones has a lot to testify to. When we talk about abuses, she has lived them and wears the scars under a confident, if reserved, smile. In 2016, accompanying the tumultuous presidential election (which bore plenty of Islamophobia on its own), Maleika’s Mat-Su Valley community friends talked her husband, Greg, into running for the State House against Republican incumbent Mark Neuman. Then-Anchorage Assembly member Amy Demboski (who also ran a conservative talk radio show at the time) posted a link on social media to an anti-Islamic extremist conspiracy theorist’s blog. That article invented a story detailing how Muslims were stockpiling weapons in small towns across America with the intent to commit terrorist attacks should Trump win the election.

One of the fictitious would-be terrorists cited in the article – without any substantiation, because there was none – was Greg Jones. When I saw the link, I asked a friend who knew Jones if he thought he might be a terrorist. “I think he’s an electrician,” he shrugged.

But the conversation invented by one xenophobic blogger and promulgated locally by an elected official caused an uproar. “They’re talking about ‘Where is the Muslim training camp?’ and they’re trying to find it. There are people on there that are saying they want to go out and find the place. So, they’re gathering supporters to go out and find the Muslim,” Greg Jones told me at the time. “(Demboski is) endangering me and my wife and my children.”

Demboski never apologized, and Jones lost. Here, four years later, Maleika stood proudly before the attendees and professed her enduring love for Alaska. “It didn’t matter if we won or lost. The value was in getting in the race and showing others that we don’t give into fear and we never give up,” she said. “When I tell you to stand straight and be proud to be an American, be even prouder to be an Alaskan.”

Intentionally obscured in the propaganda aimed at discrediting and dismissing the Women’s March are the people behind the signs, hoping desperately that onlookers might bravely venture beyond their own perspective for a couple hours on one day a year and spend a minute in someone else’s shoes – which shouldn’t seem so outlandish a request (as a matter of scale, it’s much weirder to expect everyone else to conform to your personal perspective). Even if one is opposed to expressed viewpoints on abortion or inclusivity or any other of countless real concerns calculatedly condensed to an unrecognizable heresy in order to prevent discussion, it’s frankly a bit tortured to demand my tolerance of the belief in virgin birth, water-walking, and an afterlife in clouds or eternal fire than for you to use pronouns that someone else may find better suit them.

If these are the sounds of a lecture, perhaps the rest of us should sit down, shut up, and listen.

And the issues are real, immediate, and dire. While one can poke fun at pink hats, the plight of Alaska’s first peoples is unparalleled in the richest country on earth.

Women’s reproductive rights are under attack: Rep. David Eastman (R-Wasilla) introduced a law last year that would criminalize abortion. Sen. Shelley Hughes (R-Palmer) introduced a proposed constitutional amendment on the first day of the 2020 session that would state explicitly that “nothing in this constitution may be construed to secure or protect a right to an abortion or require the State to fund an abortion.” Gov. Dunleavy vetoed funding to the Alaska Supreme Court over their repeated rulings that outlawing abortion is unconstitutional. Discrimination against Alaska’s LGBTQ community continues without any statewide protections in place to combat it. There are still kids in cages, the world is burning, and villages are eroding into the ocean. There is a lot to be upset about and much more to do. The Women’s March is a reminder of that; and a reminder that no one should be alone in that fight.

“To be a woman is not easy; to be a human is not easy. And to be different than what the majority thinks you should be is even harder,” Meda DeWitt, a Tlingit traditional healer and chair of the Recall Dunleavy campaign, told the crowd. “The women on this stage give you permission to be who you are. You are loved, you are worthy.”