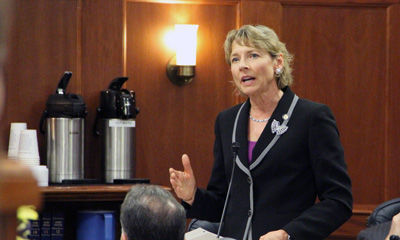 It was announced recently by Roland Holland that he will be challenging Senate Majority Leader Cathy Giessel in the Republican Primary.

When looking at Holland’s campaign website it is very clear that he is someone who is aligned with the radical wing of the Republican Party. He supports a $3,000 dividend, even though it is not financially feasible and speaks against making compromises in the legislative process.

Giessel cannot win this fight alone and will need the help of every able bodied Alaskan to come to her aid and fight back the forces of political extremism that are targeting her.

This campaign cycle is going to be one of the most important in the state’s history and it is critical that Alaskans engage and not stand by on the sidelines during this fight. There are going to be a number of Republicans who will be up for reelection in both the state House and Senate who will be under attack and whose opponents will be running on a Valley-centric platform.

President Giessel’s race is going to be one of the vanguard races because she is a presiding officer and she has become the face of pragmatic Republican governance in the legislature. But when you look at some of the House races you have others like Steve Thompson of Fairbanks and Chuck Kopp of Anchorage who will also be targeted by the radical wing of the Republican Party because of the moderate approach they have taken to handle the state’s fiscal crisis. If these Republicans are replaced by extremists who will champion Valley delegation positions on the Permanent Fund and the budget, serious harm will be visited upon the state.

For one thing, with it, we will see critical government services like the state ferry system completely gutted and destroyed and rural communities left in peril.

In general, there will be a priority placed on urban Alaska at the expense of rural Alaska and that cannot and should not be the future of our state. We need leaders who recognize the importance of a one Alaska vision and will advocate an approach to the budget and the permanent fund that recognizes we are all in this together. President Giessel has formed a valuable and important working relationship with House Speaker Bryce Edgmon to guide the state through the rough waters of our current fiscal crisis. Their working relationship has in many ways saved the state from the extremism and incompetence of the Dunleavy Administration and has kept the finance committees on a stable course to find realistic solutions to the state’s budget crisis.

If both of them continue to remain in their present leadership roles sensible solutions — re: compromises — may be found that will secure a bright future for Alaska for generations to come.