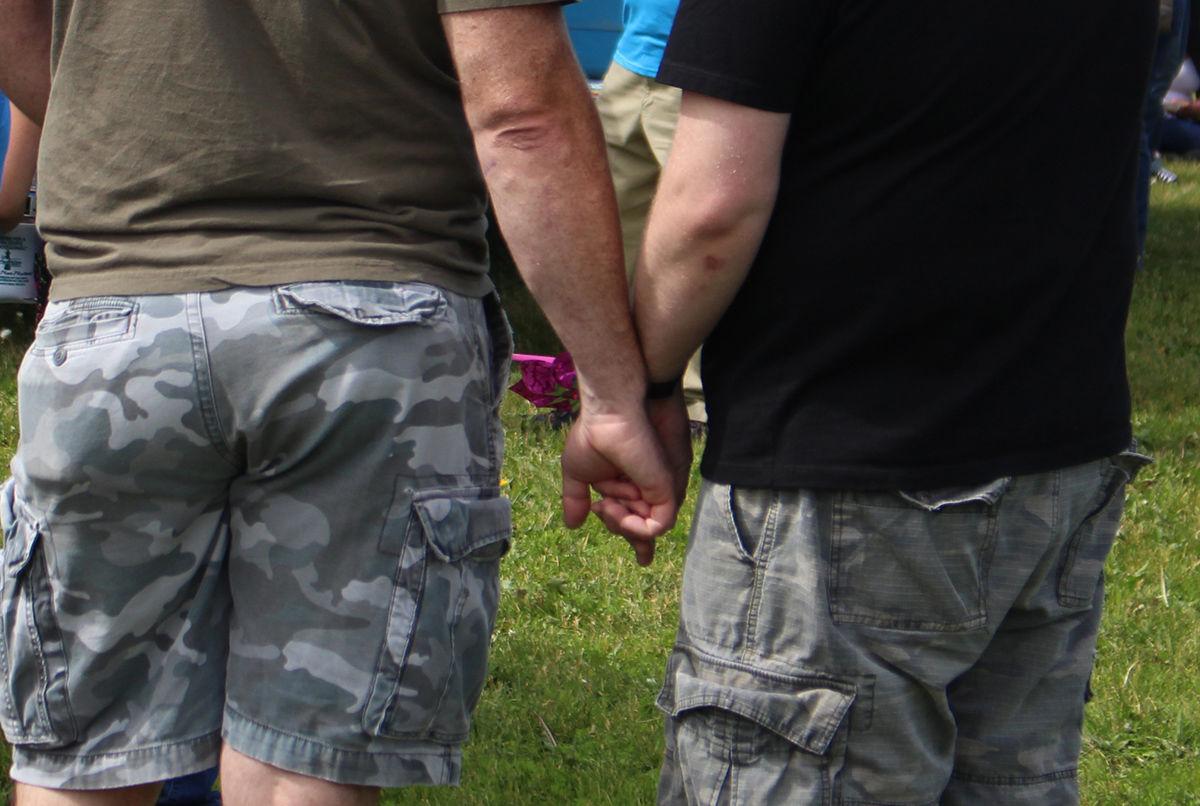 Tuesday afternoon, House Bill 82 cleared the House State Affairs Committee. Its progression, however, was not without the standard shake-your-head theatrics that come part in parcel with the topic, despite the necessity of the legislation.

The proposal, sponsored by Rep. Andy Josephson (D-Anchorage), would prohibit discrimination based on sexual orientation, gender identity, and gender expression. Alaska currently has no statewide protections, though Anchorage, Juneau, and Sitka have passed local ordinances (Fairbanks passed a local ordinance earlier this year, but it was vetoed by the mayor). Roughly 55 percent of Alaskans remain unprotected, meaning they can be denied housing, employment, financing, and access to public accommodations solely due to their sexual orientation or gender identity. Additionally, they face barriers like access to health care, coverage from insurance companies, medical leave, and student and business loans.

If passed, Alaska would become the 21st state to offer full non-discrimination protection. Utah and Wisconsin, additionally, have limited equal protection laws on the books. Alaska has none.

“All Alaskans should enjoy the right to participate in commerce and live active lives in our communities, free from restrictions based on their sexual orientation, gender identity, or gender expression. Such restrictions harm our state and harm the dignity of Alaskans,” Josephson said in his sponsor statement. “HB 82 will strengthen civil rights statutes to include one of the fastest growing communities in Alaska, make our state more attractive to workers, and shape Alaska, once again, into a shining model of human rights advocacy in the United States of America.”

Because Alaska has no current law recognizing LGBTQ citizens as a protected class, discrimination is currently legal. Therefore, there is no definitive data on rates and instances of discrimination against the LGBTQ community. The State has not been inclined to study something it does not recognize in law as an offense.

Similar results pertained specifically to housing discrimination. 18.7 percent reported harassment by a landlord or other tenants; 10.1 percent reported they were denied a lease when otherwise qualified, and 8.2 percent were either forced to move or were evicted.

A 2014 study by the left-leaning Center for American Progress ranked Alaska a “low equality state,” meaning that LGBTQ residents “lack access to many other basic opportunities and protections, and this has a very serious impact on their ability to make ends meet and provide for their families.”

Opponents have opined that since marriage equality is now the law of the land, made possible by Alaska’s court decision in Hamby v Parnell and the U.S. Supreme Court’s decision in Obergefell, anti-discrimination legislation is now antiquated. However, the procurement of legal recognition of same-sex marriage results in the exact opposite. Now, couples are allowed to marry and often required to publicly file as spouses – making them even more vulnerable to perfectly-still-legal discrimination.

During her tenure in the Senate, the late Sen. Bettye Davis (D-Anchorage) sponsored legislation aimed at protecting LGBTQ Alaskans via hate crimes legislation as far back as 2004. She carried her bill every session until she lost reelection in 2012.

Then-House Minority Leader Beth Kerttula (D-Juneau) sponsored Alaska’s first anti-discrimination bill in 2011, but it never received a hearing. She reintroduced it again the following session. (Josephson would take over as sponsor when Kerttula departed the legislature to serve in the Obama Administration.)

“Historically, Alaska has been at the forefront of civil rights legislation,” she noted at the time. “In 1945, the Alaska Legislature passed landmark anti-discriminatory legislation protecting Alaska Natives. House Bill 139 is another opportunity for the Legislature to keep Alaska at the forefront of combating discrimination and promoting civil rights.”

Kerttula’s bill was extended a courtesy Davis never was: it was given a hearing. It lasted all of 15 minutes and was shelved.

The most attention given to LGBTQ citizens’ rights that year was the response to a question posed by a Juneau reporter during a House Majority press conference. When the reporter, Matt Miller of The Juneau Empire asked if the body supported recognition of same-sex couples, they responded with laughter.

Josephson would again sponsor the bill during the 2014-2015 session, where it took a step back, again left to collect dust in State Affairs until the legislature gaveled out. The next year, he introduced it again. House Bill 184 was not only heard again in State Affairs: it cleared the committee, moving on to Judiciary, where for the first time it was heard by a second committee – then shelved again. Still, Josephson would describe it earlier this year as “a monumental event in the history of this bill.”

HB82 was heard Tuesday afternoon in State Affairs for the second time, with Chair Jonathan Kreiss-Tomkins (D-Sitka) announcing at the outset that he intended to move the bill.

“There’s only one, I guess, cohort of Alaskans that don’t enjoy the same protections as everyone else, and that is our LGBT community,” Josephson said in his introduction. “This bill would give them that protection.”

“We have a letter here from a place in Anchorage that denied access to a person that wanted to go to a women’s shelter [who] biologically was a woman,” Rep. Adam Wool (D-Fairbanks) asked, referring to a lawsuit between the Municipality of Anchorage and Samantha Coyle.

In January of last year, Amanda Coyle filed a complaint with the Anchorage Equal Rights Commission alleging she was discriminated against by an Anchorage homeless shelter, the Downtown Soup Kitchen Hope Center, based on her gender. Coyle identifies as a transgender woman and says that, because of that, she was denied housing.

The Hope Center contends Coyle was denied entry because she showed up inebriated and after hours. Coyle returned to the shelter the next day and was again denied access.

The Alliance Defending Freedom (ADF) – an Arizona-based Christian conservative legal nonprofit – jumped on the case, defending the Hope Center’s right to discriminate based on a deeply held religious belief. The case is still being litigated, but opponents of anti-discrimination laws have quickly taken the case as proof positive that anti-discrimination laws are harmful to society, and women in particular.

“We can’t wait for civil rights to be enjoyed by this class of individuals with the excuse that every potential hypothetical question will be solved, because we would all grow very old,” Josephson replied, noting that the AERC asked that the courts defer any adjudication while their investigation is ongoing. “Those things will get resolved.”

“It has a very exhaustive definition of public accommodation in general,” Rep. Sarah Vance (R-Homer) said, voicing disapproval while reading aloud what the legislation requires equal access to – which includes water fountains. “What kind of protections are there for sole proprietors of businesses of public accommodations that don’t feel comfortable with an individual coming into their accommodations for whatever reason?”

“As written, there is no accommodation of that feeling in the bill,” Josephson said flatly. “The philosophy is, that person puts themselves into commerce.... There are rules that come with that.”

Vance reiterated that some Alaskans might feel uncomfortable with accommodating certain patrons (she didn’t specifically say which ones). Josephson reminded her that has been true throughout history and, in many cases, necessitated laws like HB82. (Again, water fountains.)

Vance then proposed the lone amendment to the bill aimed at protecting LGBTQ Alaskans from discrimination. As she explained (and this is true), “In thinking about, you know, individuals who have been discriminated against because of their gender or their physical disability, the preborn is a very large class of people who have been discriminated against and simply discarded for whatever reason. And I believe that these millions of individuals should have representation when it comes to human rights and ask that this amendment be considered.”

Her proposed amendment sought to add “preborn status” as a protected class within the bill.

Public testimony overwhelmingly favored the bill by a count of 21 in favor and seven opposed (with mailed-in support even more lopsided in favor). The opposition’s objections were exactly what one might expect. One sampling, from Jessica Vaudreuil of the Mat-Su Valley, should suffice. In part, Vaudreuil said, “I’m opposed to this because it undermines First Amendment rights and also because it harms innocent children by glorifying what is considered by most as a sinful abomination.... What I think it is is coercive indoctrination of every child in the country and in the state – that’s one of the main goals of this so-called equality act. What this bill asks of its citizens is that everyone approve of transgenderism [sic] and homosexuality as a wonderfully moral good; part of a beautiful diversity to be celebrated, while denying the obvious message of the God-given human body.”

The bill passed 4-2, with Vance and Rep. Laddie Shaw (R-Anchorage) dissenting. HB82 now moves on to the House Judiciary Committee, where it does not have the votes to pass.