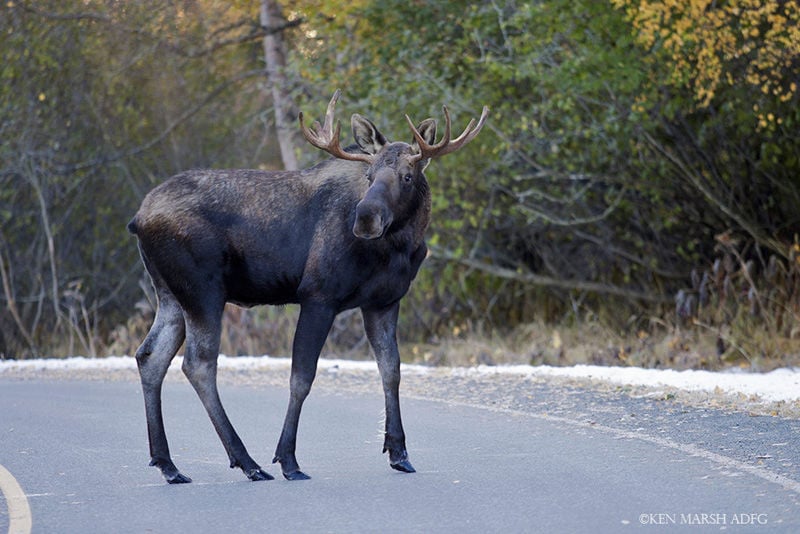 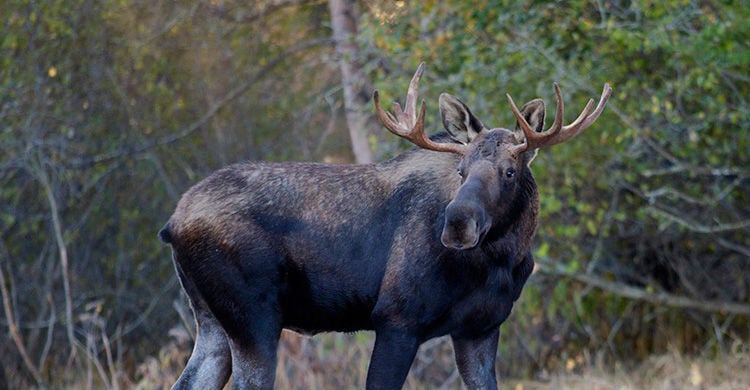 The signs stretch from the bottom of the Kenai Peninsula through the Mat-Su and pop up in low-lying regions around Fairbanks; nearly all moose-vehicle collisions occur near or below sea level. All of the signs have a yellow background with a black-figured moose in the center. Some are diamond shaped with a bull moose in the middle. Some read "Give Moose A Break" and have a cow and calf moose nibbling on imaginary shrubs. Then there's the most unique of Alaskan signs,  the rectangular one depicting a cow and calf crossing the road and a changing tally of how many moose have been killed by cars in that area so far that year.

There's nothing else quite like this sign in the Lower 48. Updates to the tally gets residents talking and visitors pointing their cameras.

"You'll see tourists parked by those signs taking a picture of them in the summer," said Guff Sherman, who designed this moose-tally sign for the state in 1990. "I see that quite frequently. Sometimes I laugh at them. But overall, I think it's kind of nice. The signs have made a good impact on the public."

Sherman has been in the commercial sign business for most of his life, and continues to run a business out of Soldotna. He's been a Sterling resident for nearly 40 years, and recalls when moose were being hit on the highway from Sterling to Soldotna, the highway he used to commute to work every day. When Sherman first moved to the Kenai Peninsula, traffic between both towns was minimal. But after the population boom of the '70s, traffic on the road greatly increased, along with the accidents.

"Every morning, after a big snowfall, you'd see two or three moose killed on your way to work. And not only was this obviously hard on the moose, but it was hard on the people too. Cars were being smashed up."

Moose, like many an Alaskans, travel on the highway because there's less snow and requires less energy than trudging through heavily wooded areas. The highway from Sterling to Soldotna, with its border of low-lying vegetation, proved irresistible for moose.

Sherman wasn't the only resident who wanted to change things around Soldotna. Gino del Frate, a senior biologist at Fish and Game (F&G), recalls many active residents in the area, including an elementary teacher who later led an educational campaign on moose, and Ted Spraker, the former Kenai Peninsula Wildlife Biologist for F&G. Along with input from the Department of Transportation, the committee looked for ways to lower the number of crashes in the area and around the state.

The most effective form of what the Department of Transportation (DOT) call moose mitigation, is to clear the area of low-lying brush and widen the road so drivers have more time to brake for moose.

F&G proposed putting up signs along problematic highways. Since the mid-'70s, according to DOT, Alaska had moose warning signs, the diamond shaped ones with a yellow background and a contrasting black figure of a bull moose at the center, much like a deer crossing sign you may see in the Lower 48.

But in 1990, F&G also wanted a sign that was unique to the area, and dynamic enough to keep residents aware that moose could run out in front of them at any time.

Del Frate, who sat in on nearly ever meeting of this committee, said the goal was to get motorists to think of moose while driving. "If you put up a sign that has changing numbers," he said "that allows motorists to say hey, the numbers are going up, maybe I should be keeping an eye out of moose just a little bit more."

The committee thought a moose-tally sign would make motorists more aware of their surroundings, especially if that number was dependent on their location and was kept up-to-date.

As far as designing the sign, Sherman said they settled on a black figure of a calf following a cow moose because they were most frequently hit in the Soldotna area. Also, as Scott Thomas-the DOT traffic engineer for the Southcentral region-said, "always expect a second moose to cross. There's a reason behind that sign that is more important than the national symbol [for wildlife presence]."

The committee considered other signs to increase awareness. Recalling "I Brake for Moose" signs in Vermont, they aimed to post similar signs in Alaska. They added a little flair to the original sign and came up with the "Give Moose a Brake" slogan, a rectangular sign that still dots Alaskan highways.

An elementary school teacher on the committee helped lead the educational campaign for children.

"Part of the idea," Del Frate said, "was for the kids to also watch out for moose while their parents were driving and maybe point out moose as they were going by."

They held coloring contests. They made t-shirts that encouraged kids to watch out for moose. The state also made bumper stickers and issued radio announcements.

The first moose-tally signs were placed in Soldotna, Kenai and Homer. Residents responded positively to these signs, and according to a 1995 report from F&G, moose-vehicle collisions did decrease by 18 percent the year after these signs appeared, though there were other moose mitigation factors-more night lighting along roadways, right-of-way-clearings, expansion of roads-that also contributed, and it's difficult to say just how effective these signs were by themselves.

Initially, F&G staff and resident-volunteers changed the numbers out every week. But over the years, the task has become a game of hot potato, with Alaska State Troopers adjusting the signs for some time, then DOT, then back to F&G.

Anyone who routinely passes these tally signs may notice that for weeks or months, the numbers can remain static. As Sherman said,

"When we first did it, they were really good about keeping the number current, but it's a lot of work. It got to the point where you can see the same number there for a long period of time. I can see why. It is hard to get through snowdrift in middle of a dark window and adjust signs."

Even if the numbers occasionally remain stagnant, Sherman believes the signs still encourage motorists to be vigilant. And for visitors to the state, it's a sign that cannot be ignored.

"I have a lot of guests visit my house for fishing over the summer," Sherman said, "they always comment on the signs."

How Effective Are These Signs?

Of the many moose mitigation techniques out there, signs may be the least effective. DOT's most in-depth report on moose-vehicle collisions comes from 1995 (moose migratory patterns generally remain the same, so reports from decades ago remain relevant). The report found that in 1987, after the Glenn Highway from Muldoon to Hiland road was expanded into a six-lane highway-with fencing for moose and continuous night-lighting-the moose-vehicle collision rate dropped by 70 percent.

Signage does not have a comparable figure to back up its efficacy.

Still, many Alaskans see the signs as effective in raising awareness. Don Dyer-Executive Director of The Alaska Moose Federation, an organization that salvages road killed moose and gives the meat to charities-said that DOT has refined statistics to pinpoint where most collisions occur; the signs are only present in high-risk areas. He added that a sign warning of moose is near almost all of the crash sites he responds to. Most people who hit moose, he said, weren't paying attention.

"If people see those signs and drop to 55 mph it would probably put the Moose Federation out of business."

Along with paying attention, Dyer said drivers need to be aware of moose behavior.

"Moose love to change their mind. They'll be three-quarters of the way across the road then decided to go back to where they came from. This happens more often than not. That's why you need them to go 100 percent across the road, for them to have their feet on the soil, before you continue to drive."

The road is slippery for moose hooves, with or without precipitation. It's not unusual for moose to slip and fall when trying to change directions, and Dyer said motorists need to be aware of that possibility when driving.

Scott Thomas at DoT confirmed Dyer's comments that the signs are strategically placed where moose frequently wander onto the road.

"In the '70s," Thomas said, "most signs would have been based on local experience. But now they're based off of statewide analysis. We look for the hot-spots for both traffic and moose."

For a sign to be placed along any road, it has to be within the top 25 percent of all collision areas in the state.

"Otherwise the signs would become random and their appearance would be harder to explain," Thomas said.

DOT continues to work with F&G over increasing moose warning signs' efficacy. One current project includes a ranking system of the state's highest collision areas. It's an intriguing possibility-and a very logical one for moose mitigation-especially considering past suggestions from the public, which has included painted antlers, reinforced bumpers, electric fences and ultrasonic sound devices.

An End to Moose Collisions?

Despite clear measures to lower the number of moose-vehicle collisions, and a real reduction in the number of moose killed on Alaskan highways, crashes continue to happen. About 650 moose-vehicle collisions happen each year in Alaska, and DOT estimates that the cost of each crash is $34,000. Nearly a dozen of these crashes are fatal for motorists.

Moose-vehicle collisions do not have to be part of living in Alaska. Moose migratory patterns are known and areas where collisions tend to happen are clearly marked. Alaskans have all the knowledge they need to avoid hitting a moose. They know that 75 percent of moose collisions happen in the dark, that April and May are the safest months, that moose-weighing 300 to 1,500 pounds-can be fatal for motorists, that 280 moose were struck and killed in the Mat-Su valley last year alone.

There is a rhyme and reason to why moose get struck by cars, and with a little forethought and caution, moose-collisions may someday reach zero.

But if that ever happens, I, for one, hope we get to keep the signs.