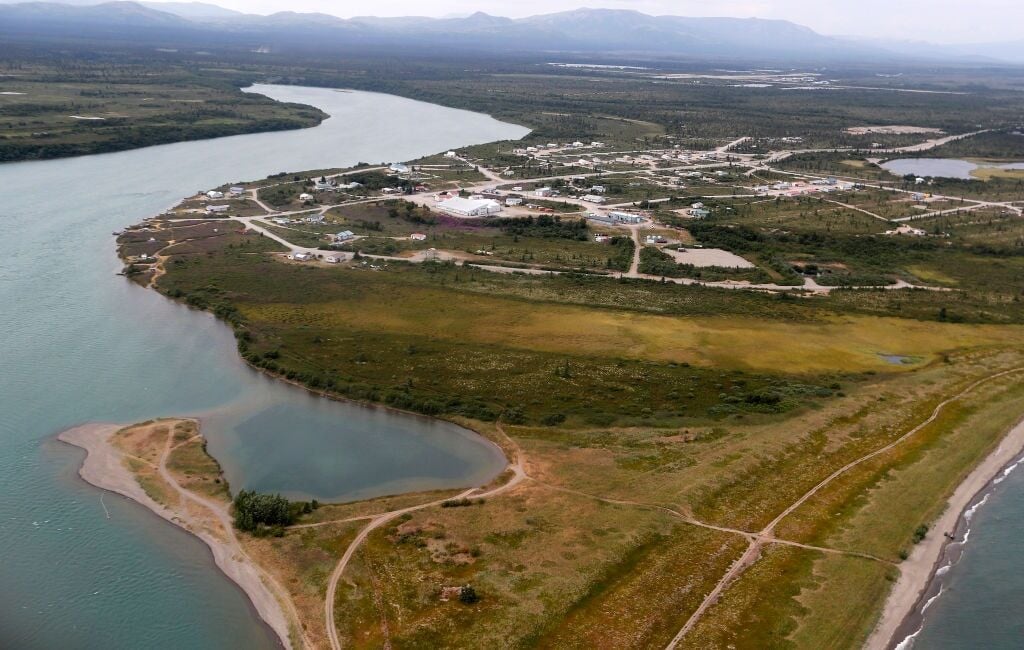 The remote fishing village of Newhalen, located about 20 miles from the proposed Pebble Mine site. (Luis Sinco/Los Angeles Times via Getty Images) 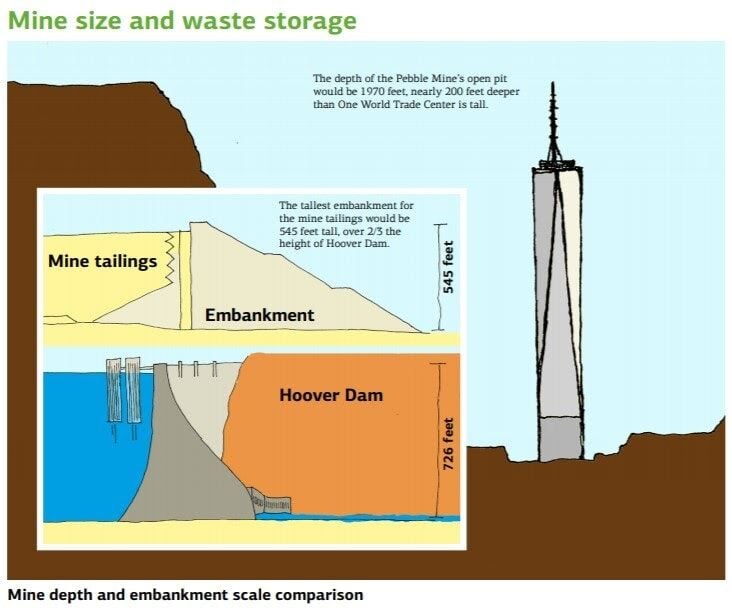 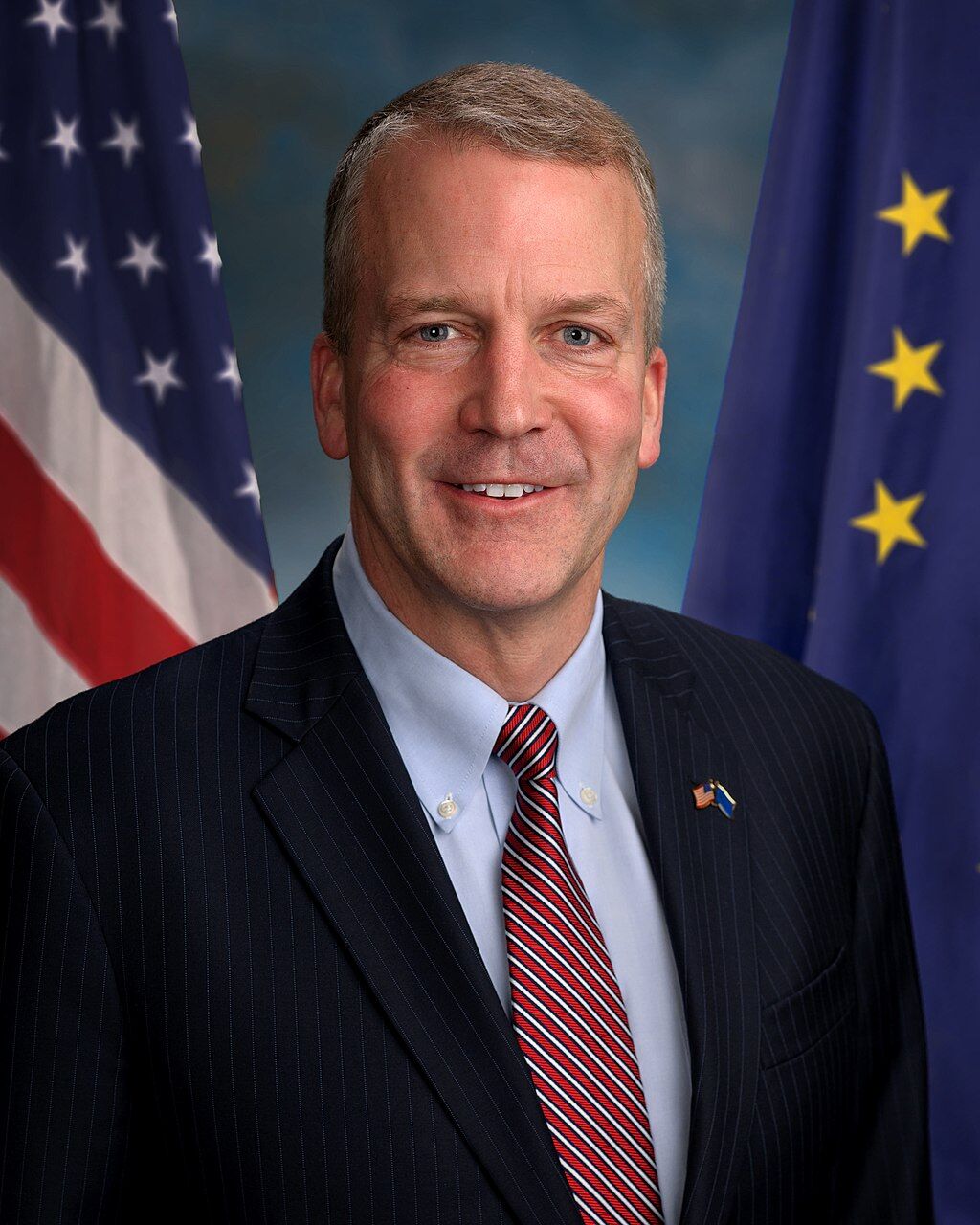 The remote fishing village of Newhalen, located about 20 miles from the proposed Pebble Mine site. (Luis Sinco/Los Angeles Times via Getty Images)

Control of the United States Senate may come down to the results in Alaska, where Senator Dan Sullivan (R) is facing a serious challenge from Dr. Al Gross. In recent days, the race has centered on $500 billion of gold and other precious metals hidden deep in Southwest Alaska.

About two-thirds of Alaskans oppose permitting extraction of metals at the site. The opposition to the proposal, known as Pebble Mine, is centered around the site's proximity to the Bristol Bay salmon fishery, which is treasured by commercial fish farmers, recreational fishers, and Alaska Natives. In 2014, Sullivan opposed a decision by the Obama EPA to shelve the project.

Since then, Sullivan's position has been hard to pin down. But in explosive tapes released late last month, the CEO of the company developing the mine, Pebble Limited Partnership, said that Sullivan's vagueness was strategic and, based on backchannels with Sullivan's office, he was confident Sullivan would not stand in the way of the project.

After the release of the tapes, Sullivan abruptly changed his position and, for the first time, said he was definitively opposed to the mine. But Sullivan has thus far refused to return campaign contributions connected to Pebble Limited Partnership. A Popular Information investigation reveals that Sullivan has received at least $34,150 in campaign contributions tied to the mine, roughly three-and-a-half times what has been previously reported.

What is Pebble Mine?

The Pebble Mine project is a proposal to create a massive open-pit mine in Southwest Alaska, near Bristol Bay. The project, which has been pushed by mining interests for nearly two decades, would seek to extract gold, copper, and other minerals worth hundreds of billions. The size of the project is astronomical. The depth of the open-pit mine would be 1970 feet, which is "200 feet deeper than One World Trade Center is tall."

Beyond the open pit, the current plans for the mine would "require the construction of a 270-megawatt power plant, natural gas pipeline, 82-mile double-lane road, elaborate storage facilities and the dredging of a port." The construction would "permanently destroy more than 2,200 acres of wetlands and waters, and 105 miles of streams." The mine would produce enough waste to "fill a major football stadium up to 3,900 times" and its operations would "cover an area larger than Manhattan."

Beyond the physical destruction of the surrounding area, there is even more concern about the impact on the region's $1.3 billion wild sockeye salmon fishery, which is the world's largest. The area, which is home to 31 Alaska Native villages, supports commercial, recreational, and subsidence fishing. During the Obama administration, in 2014, the EPA vetoed the Pebble mine proposal, based on the finding that it would "threaten one of the world’s most productive salmon fisheries." At the time, Dennis McLerran, the EPA administrator for the region, said the following:

The science is clear that mining the Pebble deposit would cause irreversible damage to one of the world’s last intact salmon ecosystems. Bristol Bay’s exceptional fisheries deserve exceptional protection. We are doing this now because we’ve heard from concerned tribes, the fishing industry, Alaskans and many others who have lived and worked for more than a decade under the uncertainty posed by this potentially destructive mine.

The EPA's 2014 decision was "strongly opposed" by Sullivan, who said it "short-circuited the permitting process" and was "based on very questionable legal authority." Sullivan said he wanted the project to be reviewed by the Army Corps of Engineers for potential permitting.

When Trump took office, his administration reversed the EPA's decision and fast-tracked a review by the Army Corps of Engineers. That review was completed this July, and the Army Corps found that there would be "no measurable effect" on the salmon fishery.

Nevertheless, on August 24, the Army Corps found that "that the project, as currently proposed, cannot be permitted under section 404 of the Clean Water Act." The Army Corps cited "significant adverse effects on the aquatic system or human environment." But the Army Corps did not kill the project. Instead, it has required Pebble Limited Partnership to submit a "compensatory mitigation plan" to offset the wetlands and streams it will destroy. The company has 90 days to submit the plan, which would make it due on November 22.

Congress plays a key role in whether the project could ultimately be approved. In 2019 and again this year, the House voted to approve a budget amendment to withhold funding from the Army Corps to complete its assessment, which would effectively shelve the project.

But these provisions were ultimately stripped from the final budget by the Senate. The Senate's posture on the project is influenced by Alaska's two Republican Senators, Sullivan and Lisa Murkowski.

In August and September, the Environmental Investigation Agency (EIA), which has been conducting undercover investigations, secretly recorded conversations with Pebble Limited Partnership CEO Tom Collier and the leader of its parent company, Northern Dynasty CEO Ronald Thiessen. The EIA posed as investors looking to get involved in the project, which was rapidly running out of cash.

In the tapes, Thiessen said they were "trying to work" with Sullivan by allowing him to say things that are critical of the project without being explicitly opposed.

This year Senator Sullivan is up for [re-election], and he’s not as prestigious or long-serving… And Sullivan’s going into his second and so he’s got a battle on his hands and we’re trying to work with him to make sure he doesn’t go and say something negative like – and he won’t say "Don’t build the mine," but he might say "Don’t issue the ROD [Record of Decision] until after the election."

This posture, Collier explained, allowed him to "satisfy" voters on both sides of the issue. This ambiguity is reflected in Sullivan's statement to the Army Corps' announcement, on August 24, that it would not immediately issue a permit.

In that statement, Sullivan emphasized that he was "a very strong advocate for responsible resource development" and "consistently advocated that the permitting process for the Pebble project go forward in an orderly, science-based manner." He said he had "worked hard to ensure that the voices of all Alaskans – both for and against the Pebble Mine – would be heard, considered, and respected at the highest levels of the federal government."

Sullivan said he supported the Army Corps' conclusion that "a federal permit cannot be issued" now. But Sullivan also reiterated his support for the "fair but thorough process" undertaken by the Trump administration — a process that may ultimately still result in the mine being approved. He never explicitly opposed the Pebble mine project.

On the tapes, Collier bragged that, since Sullivan released his August 24 statement, he had been "sitting over in a corner and being quiet." That silence, Collier said, would allow the permit to be approved without Sullivan "making bad news stories."

Sullivan posed a risk, Thiessen said, only if he vocally opposed the project. Why? Because he's "a Republican senator," and it's important for Trump "that he gets elected." If Trump feels Sullivan is "going to lose," and Sullivan's position is to stop the project, Trump could stop the project to help Sullivan.

Collier said he remained in communication with "one of [Sullivan's] top advisors," through Collier's predecessor, John Shively. According to Shively, he was assured by Sullivan's staff that Sullivan would "try to ride out the election and remain quiet."

It was only three days after the tapes were released, on September 24, that Sullivan said that he definitively opposed the project. "I oppose Pebble Mine. No Pebble Mine," he tweeted. Sullivan claimed that his August statement was similarly unequivocal but that is not true. If it was true, he would not have needed to clarify his stance.

In the tapes, Collier made similar claims about influence over other state and federal politicians. Several, including Alaska House Minority Leader Lance Pruitt (R), have returned money from Collier. "What he was saying was implying things I am not OK with … that this idea that he ‘owned’ different people," Pruitt said. Following the release of the tapes, Collier resigned from the company.

Sullivan condemned Collier's statements as lies. But he has refused to return campaign funds that he accepted from Collier and other executives working on the project, even as it has become a major issue in his campaign.

According to the Anchorage Daily News, Senator Sullivan “received more than $10,000 from Pebble [Mine] executives and employees since 2017." But Popular Information’s investigation revealed that Sullivan has received a total of $34,150 donations connected to the project. The Anchorage Daily News report doesn’t include donations from Pebble’s parent company, Northern Dynasty, or its corporate lobbyists.

Employees at Akin, Gump, Strauss, Hauer & Feld also donated $2,625 to Sullivan’s campaign between 2019 and 2020, according to FEC records. This amount includes $625 from James Tucker, a lobbyist assigned to Pebble Limited Partnership's account.

This story originally appeared on popular.info