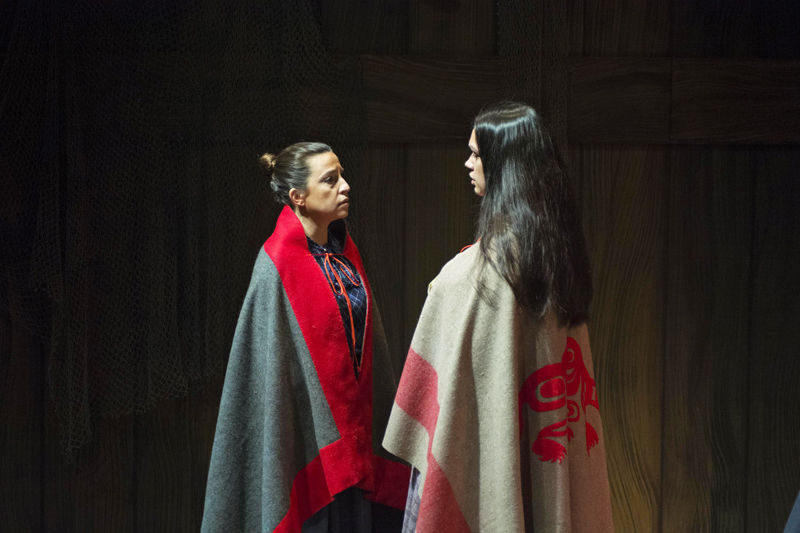 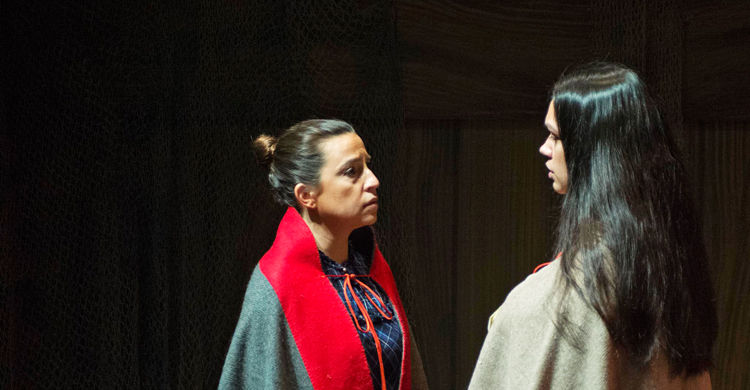 Vera Starbard's mother always told her she had a story to tell.

"And according to her," said Starbard, 33, whose play Our Voices Will be Heard comes to the Sydney Laurence Theatre Feb. 19 through 29, "I won't stop telling it until it's done."

In many ways, Vera Starbard's just beginning. Not only is it her debut theatrical production-fresh from a world premiere at Perseverance Theatre in Juneau-it's the first, and only play, she's ever written. Still, in the playbill, Perseverance Artistic Director Art Rotch likens her to "a young Paula Vogel."

Starbard, herself, offers a much more understated characterization of her entrance onto the scene.

"I didn't mean to become a playwright at all," she explained the other day at Heritage Coffee in Juneau. "Of course, now I'm hooked."

Our Voices Will Be Heard came directly out of a nine-day playwriting workshop, the Dark Winter Productions; Starbard, then a fledgling fiction writer, applied on a whim, "to help write dialogue."

"I'd never even written a play before," she said.

But after a week of intensive training and mentorship by a group of nationally recognized Native American and Alaska Native theater artists, Starbard-herself Tlingit and Dena'ina Athabascan-generated the first 10 pages of what would eventually become the complete first draft.

"Then I went to Europe, where I was supposed to be writing a book only, I wound up writing a play-plus six chapters of an unfinished book," she said.

After a staged reading in Anchorage in 2013, Our Voices Will Be Heard earned a slot in the prestigious Native Voices at the Autry in Los Angeles.

"While Starbard doesn't want audiences to pigeonhole her, she recognizes the benefits of being a Native writing about Native issues from a Native perspective."

"Dark Winter Productions basically bullied me into submitting it," she said. "I didn't think the play would actually be selected."

As part of Native Voices, in 2014 Starbard workshopped Our Voices Will Be Heard in LA-"definitely what the play needed: working out what it would look like, what it would sound like." She also enjoyed staged public readings at La Jolla Playhouse in San Diego, Lark Playwriting Center in New York and Perseverance Theatre in Juneau.

"Honestly, I was most nervous for the Juneau reading, because we were presenting it to a Tlingit audience for the first time," said Starbard. The play centers on several generations of a Tlingit family and strongly features Tlingit singing, dancing, drumming and storytelling.

"But the community's reaction was so positive," she said. "It was like 'yes, this is our story.'"

Eighteen months later, Our Voices Will Be Heard world-premiered on Perseverance's main stage in Juneau-this past January 15, four years to the day since the staged reading of her first 10 pages at the Dark Winter Productions.

The production is also directed by Larissa FastHorse, of the Sicangu Lakota Nation, and stars Yup'ik storyteller and actor Jack Dalton-both randomly assigned to direct and star in that reading four years ago.

"Larissa and Jack have been with this play since the very beginning," Starbard said.

"At first I was scared by the collaborative process, but now that's what's drawing me in," she continued. "Working with artists who really understand the look, sound and feel I'm going for. Everyone has such a beautiful imagination."

Our Voices Will Be Heard takes the form of a split, interspersed narrative: one storyline set at a Tlingit ku.éex' or "potlatch" in present-day Southeast Alaska, the other in a small Tlingit village at around the turn of the 20th century.

Both stories unfold before a backdrop strongly evocative of a cedar clan house, courtesy of scenic designer Akiko Nishijima Rotch and Tlingit visual artist Rico Worl, whose specially commissioned formline house crest-backlit and glowing throughout the play-Starbard describes as "visionary."

(Quick aside: I have to agree with her; Worl's panel is an incredible piece of art in and of itself. I'd also be remiss not to mention the play's score/soundscape by Tlingit percussionist Ed Littlefield. Both contribute to the play in a way no script can evoke through writing.)

While Starbard doesn't want audiences to pigeonhole her, she recognizes the benefits of being a Native writing about Native issues from a Native perspective.

"For instance, the Tlingits love metaphor and I love metaphor. That's how we both choose to tell stories," Starbard said. Indeed, Our Voices Will Be Heard hinges on the saga of "Wolverine Woman," which she pieced together from several Tlingit oral traditions.

"I'm proud of my culture and I want to make it accessible," Starbard explained. "But the play's not for any one specific audience. No matter who you are, you'll find something you can connect with-at least that's the goal."

Still, there's no escaping the play's "Nativeness." Not only does it feature a Native American director (a rarity, in and of itself), but also an entirely Alaska Native/Native American cast, including (in addition to Dalton) Tlingit actors Erin Tripp, Xoodzi, Leetta Gray and Frank Henry Kaash Katasse; Aleut actor Jane Lind; Iroquois actor Erika Stone and Cherokee actor Robert Vestal.

"It's no small feat to find an experienced Native director and cast," she said, crediting the entire creative team with making her play "so beautiful."

Born in Craig and currently living in Anchorage, with strong roots throughout Southeast Alaska-"lots of cousins and aunties and uncles"-Starbard also runs Writing Raven, a marketing, communications and design firm specializing in Native non-profit organizations. And she's heavily involved with the Alaska Playwright Project, co-founded by Starbard and three other playwrights, one of them now her husband.

In fact, the Alaska Playwright Project will present its own annual production "Short Stories for a Dark Winter," now in its third year, February 23 at the Performing Arts Center, using the same Our Voices Will be Heard set. In addition to providing a showcase for Alaska Playwright Project-written scripts, "Short Stories for a Dark Winter" raises funds to support other Alaskan artists.

Of course, Starbard's play is also very "female." The theme of matriarchal heritage plays a large role in Our Voices Will Be Heard, specifically how a daughter, mother and grandmother relate to each other in response to shocking, difficult revelations about their family.

(Another quick aside: the playbill warns of "terribly difficult" subject matter involving sexual abuse; at my performance the audience received the warning again verbally, right after it was asked to turn off its cell phones and refrain from flash photography. This led me to expect either extreme graphicness or some kind of live-action afterschool special maybe both. Luckily, neither proved true. Not only is the abuse never depicted; it's mentioned in purposefully vague terms. And while Our Voices Will Be Heard does occasionally veer from dramatic to melodramatic, there's a fine line between the two, which isn't always clear to seasoned playwrights, let alone a first-timer. I, for one, am inclined to forgive Starbard's script for occasionally trespassing across it.)

The matrilineal nature of the play comes as little surprise. When I asked Starbard to name a few of her influences, she immediately mentioned her mother-"a very complicated woman, with a high moral standard"-and grandmother-"a strong Tlingit lady, who gave that strength to her entire family."

I clarified I'd meant playwriting influences.

"Oh, then Aaron Sorkin," she said.  I wasn't expecting that answer, but it makes sense-he does write crisp dialogue.

Though Our Voices Will Be Heard is Vera Starbard's first play, it certainly won't be her last. She's already at work conceptualizing three new pieces for Perseverance Theatre, and hopes to produce Voices elsewhere around Alaska and the Lower 48.

Perseverance Theater itself plans to include another world premiere by another debut Tlingit playwright in next year's season. Also coincidentally, this play happens to be written by Frank Henry Kaash Katasse, whose name you'll notice amongst the actors in Our Voices Will Be Heard. What's more, Katasse's play has also been accepted for Native Voices at the Autry. Clearly, these voices are being heard.

Don't get me wrong. I encourage you to enjoy Starbard's work on its own artistic merit-specifically its overarching questions surrounding culture and how it evolves in response to internal and external pressures. However, it's also nice to see a traditionally underrepresented group represent for a change.

"The Native Alaskan community has been so supportive," said Starbard. "I want to encourage people-especially young people-to keep writing about our culture. Our culture is important to keep as part of the world."

Our Voices will be Heard runs Feb. 19 - 28 at the Sydney Laurence Theatre. Tickets are $49.25 and available at centertix.net