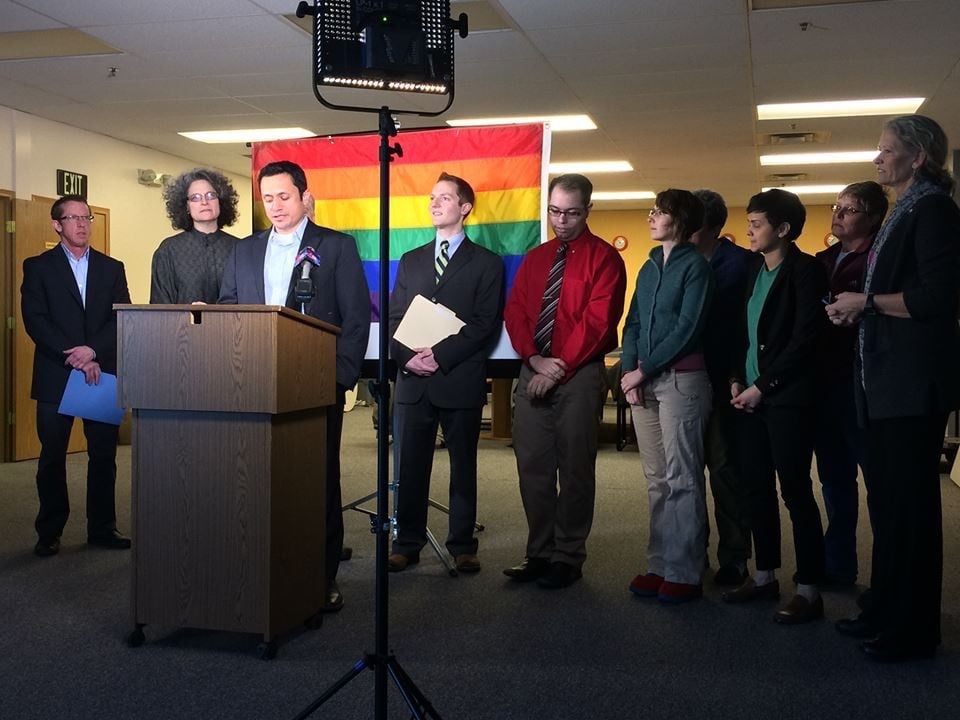 The somewhat surprising retirement of longtime District 20 House Representative Les Gara opened the door for a number of highly qualified candidates to take aim at Juneau in a heavily Democratic district.

Among them is Elias Rojas, who, if he wins the primary election on Aug. 21 — and thereby almost assuredly the general election in November — would become the first openly gay member in Alaska State Legislature history.

I caught up with Rojas recently for a little Q&A at the SteamDot Coffee downtown.

So how long have you lived in Anchorage and what brought you here?

I moved to Anchorage in late 2006. I’ve worked for Native corporations, United Waty of Anchorage, a lot of community activism, mostly with the LGBT community.

When I first moved from New York in late 2006, where I was senior field organizer for the national Gay and Lesbian Task Force, our community had been under attack, mostly around 2003-04, where around the country there were constitutional amendments banning gay marriage. Our task force organized teams and organized communities to run a political campaign.

I was trained as an activist, and learned to run a political campaign to beat back those amendments in 2003-04 — we took quite a big hit back then.

I moved to Anchorage in 2006 and early in 2007 there was an anti-gay advisory vote taking place in April, so when I got here I started organizing like I knew how to organize. This organizing gave me the opportunity to meet the local LGBTQ community.

What’s been your activism experience in Anchorage?

That 2007 advisory was to strip away same-sex partner benefits for state employees. The Republicans couldn’t get enough signatures to put it on the ballot, so they tried to get an advisory vote to (advise) the legislature. Luckily, we didnt lose by too much; it wasn’t really a mandate. We formed a statewide LGBT organization and I started working on a non-discrimination ordinance. In 2009, one of our leaders helped usher in a non-descrimination bill, only to be vetoed by incoming mayor Dan Sullivan. In 2012, we tried again with Yes on Prop 5. That fell short at the ballot box, but during that period of time we started building a lot of momentum to get pro-LGBT candidates, trying to change assembly, so that in case we got something passed, we could have a veto-proof majority. In 2015, we finally got passed a non-discrimination bill. I was a leader on that, along with protecting it this last April with the ‘No on 1’ campaign.

When did you decide you were going to run for the Legislature?

I’d been thinking about it for a little while. Obviously, Les not running for re-election caught me a little by surprise — I thought he’d serve a couple more years.

Last year, I was honored to be named a Victory Fund Institute Empowerment Fellow, which teaches campaign organizing to prospective candidates running as opening out LGBTQ candidates or running campaigns. That was very enlightening; I met quite a few people across the country… That gave me some insight and got me preparing myself for a possible run in the near future, and here we are.

Have you ever run for office before?

I have — once. A year or two out of college I ran for the San Diego City Council. I was too young, not ready, but it was a good experience.

Right out of college I had run political campaigns for our Assembly (California state house) candidate. It was like a house district but it was a full-time legislature. I worked in East LA, a staff of about five people in a district of 250,000 or so. It was a buzzing office and I did a lot of constituant work, going to events, supporting our member of the Assembly while she was in Sacramento for sessions.

Having been through those LGBT-related political wars of the Aughties, what has that taught you about politics that you could take to Juneau?

One of things I’ve been working on the last two years is a statewide non-descrimination law. It’s a Juneau grassroots lobby and lets us know who’s with us and who’s against us. It gave us good insight on how Juneau worked — or didn’t — and it sparked interest in how I might impact the Legislature.

We’ve only touched on it a little bit. It’s a bipartisan coalition, so many things could actually pass, we just need the right people there, 25 percent of the (next) legislature may be or be new, so it’s an opportunity to bring in new blood, new ideas and maybe lessen the hyper-partisan environment there, to really think about ideas, new ideas and how move forward together.

You’ve got some strong competition in this race, especially Zack Fields and Cliff Groh — how do you see this primary race breaking down?

I think it’s going to be an interesting race and it’s going to boil down to going door-to-door, talking to neighbors, learning their backgrounds, experience and having the voters make a decision. Both Zack and Cliff are strong Democrats, good Democrats — we’re all there; there’s not too much differentiation in what we all believe, though of course, that may still be evolving — only time will tell.

The district has a some really good choices this time around.

The district has some distinct polarities with high-value properties as well as some of the poorest neighborhoods in Anchorage. How do you approach that demographic?

I came from a single-parent family — I grew up in central California, a majority Latino city, and so I didn’t have much growing up. We had enough. My mom worked two jobs, and we never struggled, but I’ve lived that sort of experience and I have a keen understanding of where people might be struggling.

I was the first in my family to get a college degree, and I’ve worked in the non-profit sector and corporate America. Got an MBA, own my own business. I am living the American Dream, so I think I have a good a pretty good perspective on how the district balances out.

If elected, you would be the openly gay member of the Alaska Legislature. Are you conscious of that as a barrier-breaker?

It is. You have that aspect, but I’d also be one of two Latino’s in the Legislature.

This race isnt about identity, but I’m proud going in to represent.

The LGBT community has a strong presence downtown. It’s presumably a solid base for you?

I’ve been working politically since I first got here, so I’m pretty well connnected in regards to being involved in the LGBT comm. I’ve done a lot of advocacy politics building that support across community.

If elected, what would be the first bill you’d drive through in Juneau?

I think it has to be an all-hands-on-deck fiscal plan. It’s about really building relationships to not only pass in the House but would have a good chance in the Senate. Maybe I’m too optimistic in regards to building those bridges, but with new blood in there, there could be a possibility. It has to be a bipartisan effort.