After a mob incited by President Donald Trump stormed the U.S. Capitol Wednesday, many pointed out the difference in police treatment compared with Black Lives Matter demonstrators last summer.

Marissa Lang, a reporter with The Washington Post, covered both Wednesday’s breach and the earlier civil-rights demonstrations in Washington. She said she saw firsthand how police officers’ behavior starkly differed.

She shared her experiences Thursday in an interview, which has been edited for length and clarity.

Center for Public Integrity: Tell me your experiences at both events, starting with Black Lives Matter demonstrations in June. What did your days look like on the ground?

Marissa Lang: Ugh, my days. My nights, really. I started covering the racial justice protests on May 30, so that was the second night of the protests in the District. That was the first time that we really saw federal officers out in the street, tear gassing protesters, using extreme force to clear Lafayette Square park. And I was there almost every day from [May] 30 to July. I would get ready for the protests, which meant putting on gear, putting on comfortable clothes, shoes I can run in, having a helmet, a respirator mask, face covering … because of the pandemic. And then going out, and I would be out there for I don’t know how many hours. I’d start my evenings between 4 p.m. and 6 p.m. and often wasn’t home before midnight or 1 in the morning. And I would usually stay until long after curfew if there was a curfew, long after police cleared the area. Until it seemed like there was minimal confrontation or very few protestors left. When it was unlikely for something else to just explode.

CPI: And did you get injured at all during those events?

Lang: No, I didn’t get injured. I mean, I got tear gassed a lot. I got tear gassed, shot at. I had some paintballs hit my backpack. I got pushed. I guess that’s the worst of it. Some of my colleagues got hit by rubber bullets and stuff, and that’s much worse. 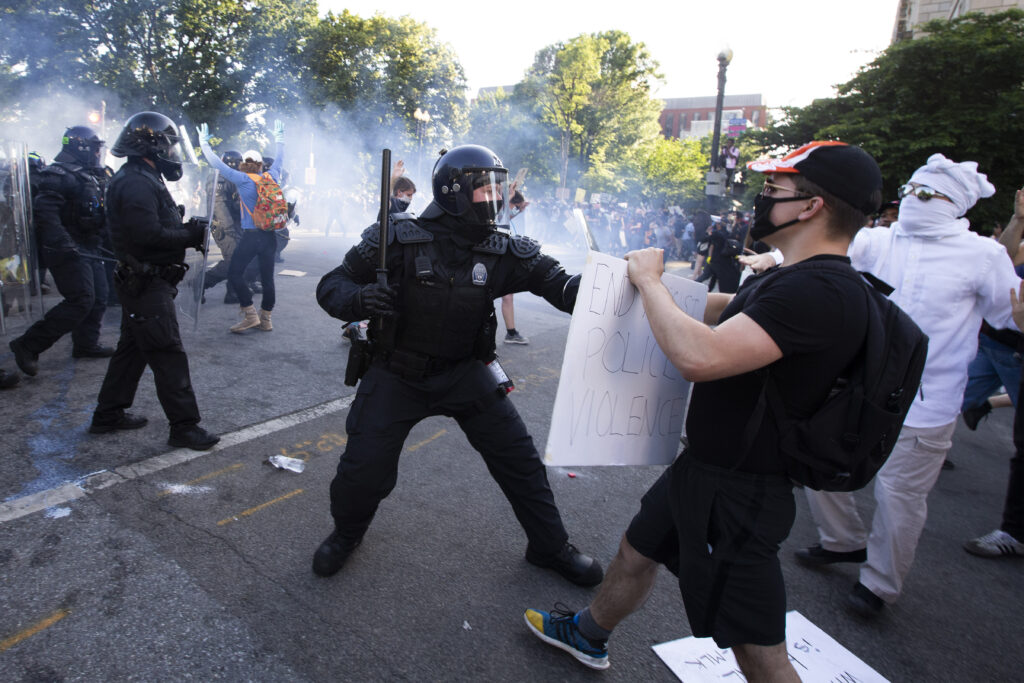 CPI: What about yesterday? What was your experience at the Capitol?

Lang: Yesterday I arrived at the Capitol a little after noon, while President Trump’s speech was still going on at the Ellipse. I started at the Capitol because I had a sense that was probably where any confrontations would happen. I was working with a team of reporters; we were spread out all over D.C. trying to cover as many angles as possible. And when I got to the Capitol, the crowd was really buoyant. They were really jubilant. They were on this high of having just heard the president address them, and address them for coming to D.C. after having called them here. The mood when I got there was pretty light, and as I stayed there and as the crowd got whipped up, it definitely shifted. What was really interesting, and comparing it to the BLM protests I was at, I saw similar behavior. I saw protestors dismantle police barricades, pull these metal barricades apart and throw them to the side, or use them to sort of shove officers out of their way. But what was really, really different was the police response.

CPI: And what was that difference in response?

Lang: It was night and day. The police response during the Black Lives Matter protests, during racial justice protests, was really harsh. They did not hesitate to use, as I mentioned, tear gas, pepper spray, rubber bullets, stun grenades or other kinds of crowd-control munitions. They beat protestors with their batons; they used shields.This went on for days. It got to the point where you kind of expected it, where you’re like, OK, the cops are going to tear gas everyone now. And I kind of went into yesterday’s protest with that mentality. I brought my gas mask. I brought my helmet. And I thought surely once this crowd gets to the point where they’re knocking over barricades and crossing the police line, which I did think they would do, surely we’ll get tear gassed. They’re just going to blanket Capitol grounds with tear gas. And it never happened. And as they dismantled the barricades and shoved police officers out of their way, at some point it seems like the officers were just stepping aside, they were running away from them to scatter and get out of their way because they were so outnumbered, so overwhelmed. And I was shocked that we were not seeing the same kind of force being used on these demonstrators as we had seen over the summer. This was folks trying to overtake the United States Capitol building.

CPI: Do you think a lot of the response was the fact that the U.S. Capitol Police and the Metropolitan Police Department didn’t beef up the number of officers for this event? While during BLM protests over the summer, they came with everyone that they had?

Lang: It’s really confusing because during the racial justice protests, they had a number of police agencies. The Capitol Police was one of those agencies. Park Police were also out. There were a lot of federal police officers that responded. And, in fact, the federal police officers were the ones using the tear gas and a lot of the munitions that I described. That’s why I thought we would perhaps see a similar response. So it was really perplexing to me that not only did they not respond in the same way, but as you mentioned, it just did not appear that they had the numbers. And I know D.C. police announced prior to the event that they were having every on-duty officer on the street, and they had the National Guard out. They planned to … have as much law enforcement present as they could. And I guess I wrongfully assumed that the feds were going to do the same.

Lang: It’s a very different crowd, and it’s also a very different cause. I think the thing to keep in mind about the BLM protests is a lot of these folks who came out were grieving, they were angry, they were feeling a lot of pain because of the violence they were seeing enacted against Black men and women. They were outraged by the injustice, and for a lot of them, it felt very much like they had to make a stand for their own survival, for their own existence and right to live in this country. And I think that those were the stakes for a lot of them. And when I talked to those protesters, that’s what they said. So I think that compared to the crowd yesterday, it’s just very different. The crowd yesterday was more of a provocatorial crowd. They absolutely were trying to provoke a response. I have been tracking messages on a bunch of right-wing forums for weeks. They were talking about making a stand, making a scene at the Capitol, storming the Capitol, bringing weapons, moving as a group so the police couldn’t pick them off and targeting specific Democratic lawmakers. And, in their view, the only person who hears them is the president. It was a very different kind of motivation and a very different crowd. And the reason for provoking a response from the police and the reason for doing the things that they did came from a very different place.

CPI: So is it fair to say that police officers provided more force in one situation than the other?

Lang: Absolutely. I mean, to be clear, the officers did eventually use some munitions. They did use tear gas, they did use pepper spray, they set off some flash bangs toward the end. Eventually the Capitol Police did call in the D.C. police to help them clear the Capitol grounds, at which point I did see D.C. police officers in that very familiar head-to-toe riot gear look I have seen them in before. And they are using shields and batons and pushing people, but it was very delayed. It was very much after the bulk of the action had happened with the breach. That’s what I think was different. As everybody saw during the racial justice protests on June 1, there were instances when police started firing tear gas when there was nothing happening at the protest that was violent. Sometimes someone would shake the fence or throw a water bottle, but not break open a building. And then you’d get tear gassed on a whole city block. I think the difference was absolutely the police response during the Black Lives Matter protest was much more proactive, and I think yesterday was much more reactive.

CPI: Did you see firsthand that the officers were allowing a lot of what happened? There was that viral video of what looks like an officer moving the gate to allow demonstrators inside. Did you see a lot of that?

Lang: I didn’t see any of that, actually. I saw officers who were greatly outnumbered trying to hold the barricade and hold back the crowd. And they got pushed aside. They got run over. Officers who were stationed on the Capitol steps who were trying to hold the line, who got ambushed and pushed over – some of them, I think, fearing the crowd, the mob – ran. They ran to the side, ran out of the way. It didn’t look like they were waving them in saying, “Come on,” but they ran because they were overwhelmed and outnumbered.

In this combination of photos, on June 3, 2020, demonstrators, left, protest the death of George Floyd at the U.S. Capitol in Washington and Trump supporters try to break through a police barrier Jan. 6, 2021, at the same location. (AP Photos)

CPI: Did you see the police officers running out of the way because they were outnumbered at all over the summer? Even once?

Lang: No. [Laughs.] I don’t think I did, now that you mention it. What struck me over the summer was how many cops there were. It was often not just one line of police, but, like, three lines deep of police officers in riot shields. So even if the front line of police officers were getting pushed or getting water bottles thrown at them or whatever, there was someone right behind them. So it didn’t seem quite as penetrable in terms of the police line.

CPI: What else should I know about the difference in police behavior, yesterday versus over the summer?

Lang: I think it’s really important to point out the racial demographics of the crowd. Yesterday’s crowd was very white. That’s not to say it was all white. It wasn’t, but it was majority white, and certainly majority right-wing and right-leaning. There were people in the crowd who were wearing “blue lives matter” shirts and waving the thin blue line flag and were telling the police officers, even as they were breaking the police line, “We’re here for you guys; you guys should join us; we’re on the same side.” The antagonism over the summer was a huge difference. Over the summer, we had protestors telling police officers that they were the problem. They’re murderers, they’re complicit in a racist system, they’re responsible for all these horrific things happening to Black men and women in this country. I wonder, too, how much that had to do with the police response. You’re dealing with a very different crowd racially, and you’re dealing with a very different crowd over their perceptions of the police.

Read the original version of this story at centerforpublicintegrity.org