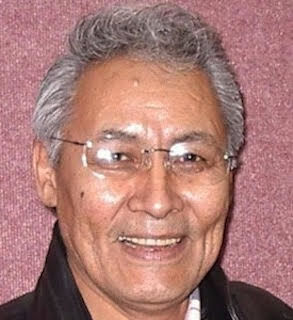 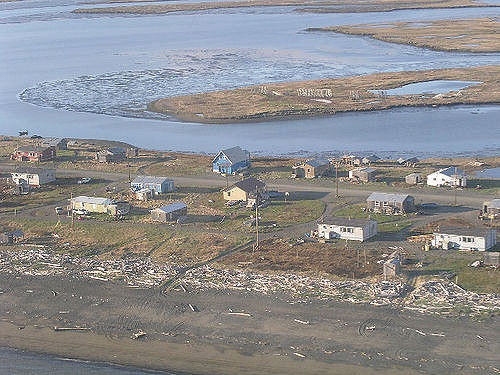 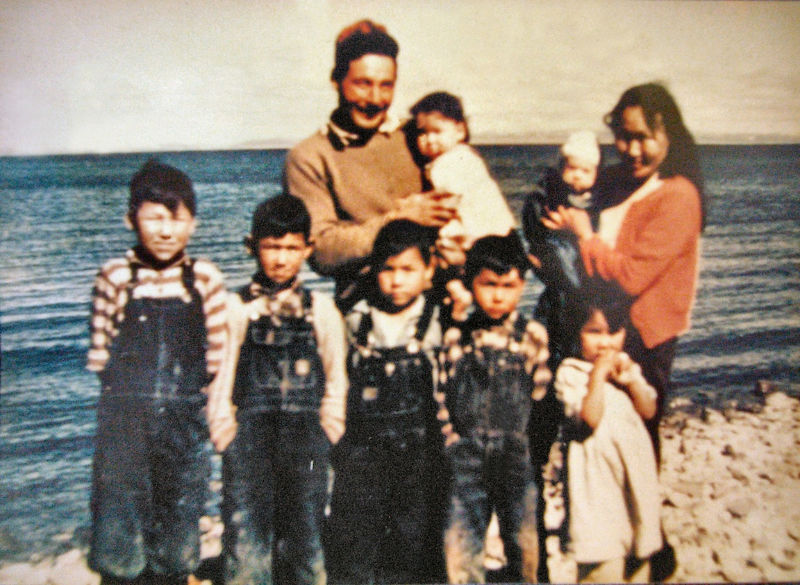 I, John Nasalook Tetpon, was born and raised in Shaktoolik, a small village of about 130 lnupiat people located on the shores of Norton Sound. That day, January 5, 1943, was said to be bitterly cold, with a stiff north wind blowing hard against the lightly insulated house we called home. Our house, a two-story tarpaper affair fitted with a cement chimney, was heated by firewood cut from logs gathered from the ocean shore.

I am one of nine children, and the third from the oldest. There were 6 of us boys and 3 girls — Darlene, Bernice and Edith. We called my oldest brother Sonny because he was named after my father Eric Jackson Tetpon, Sr. My next older brother was Floyd, who was called Doxy by everyone in the village because of his dark skin. Then came me. And Elmer, my younger brother. Then there was Levi and Walton, the youngest of the brothers.

Growing up in a village gave us limited knowledge of the world outside. We would leaf through Life Magazines and the Saturday Evening Post and see photos of things like cars, farms, railroads, highways, cities, large houses with lights that came from bulbs, airplanes and the like, which caused one to wonder where all these things came from. All we had were wood stoves, three-room houses, and dog teams. Sometimes late at night, and in winter when the stars were out, one could hear our neighbors cutting wood with a lumberjack's saw. The sound is unforgettable — whee-whew, whee, whew — all night long. I never paid a lot of attention to it but I also knew when we ran out of firewood at our house, we could see our breath in the air. But that was a common occurrence and no one in our household gave it much thought. It was just a fact of life.

Shaktoolik was probably like any other Native village back then with one store, a post office in the front arctic shed of my uncle Simon Bekoalok's house, one schoolhouse and one church. My cousins and I were inseparable. We went nowhere with Toy and Ubun, Uncle Simon's boys, who were about the same age as Elmer and me.

In the 1950s, Christianity was booming and everyone went to church. By that time, most villagers had come to believe that their culture came from the devil because white preachers said so, and old practices like singing Inupiat songs and inupiat dancing had become extinct. There was great fear among villagers that they would go to a place called Hell if they uttered anything cultural or danced. Shame and angst stood firmly against anyone saying the Native name for shaman.

In Shaktoolik, elders, once the foundation of our cultural heritage, were now pillars of the church and cultural practices were gone forever. As cultural practices became a foggy memory, so did the language. All of us were ordered by white Bureau of Indian Affairs teachers to learn English and forget Inupiaq. If we uttered an Inupiaq word or phrase, we were slapped around and sometimes beaten. None of our parents chose to object and teachers became village bosses, as did traveling white preachers.

Villagers stood in awe of white people and gave them a combination of respect and fear. What was a government and religiously backed system was actually cultural genocide in practice. Despite these injustices, my memories of being raised in Shaktoolik are happy ones. Being a boy who took risks and being watched over by a whole village made me feel safe and content. I often say to this day that boys in small villages are closely watched on the one hand, but are often left to wander and explore like puppies. “They'll learn,” was the by-word for us. And we did.

In summer and fall, when the berries were ripe, I would often jump into my father's kayak and row my way across Tugumeniq, the river behind the village, walk up the riverbank on the other side, lay on my back on the tundra and watch the clouds roll on by, all the while reaching out anywhere around me, filling my hands with berries and eating my fill.

In winter, I had the task of hunting ptarmigan and rabbits for our weekend supper times. I had a small team of dogs — 5 in all — that dad had given to me. On Saturdays, I would hitch the dogs up, load my sled with a few provisions, including a reindeer skin, and head out into the wilderness. Late in the day and with my small game sack full, I would point the dogs toward the village, jump into the sled and lay down to sleep. When the sled stopped, I knew I was home. Those were the days.

Our family had a spring camp at Cape Denbigh, about 5 miles from the village as the crow flies. There, after school let out for the summer, we would wait for the right part of the spring season for the seabirds to lay their eggs on the cliffs. As soon as other men and their families from the village arrived, we knew it was egg-hunting time. Cape Denbigh, a long out-cropping of land with 300-foot rock cliffs, was the annual stopover for seabirds laying their eggs. The men made ready with ropes and rappelled down the sheer rock walls from the top of the cape with tubs and buckets tied to them. Every now and again, there would be a tug on the rope and others topside would strain to pull the egg-laden tubs and buckets to the top. By late afternoon, the men would consider the day done and we would all gather at our campsite to feast on the fruits of their labor. There would be smiles and laughter as wild bird eggs were a delicacy.

As soon as we could, and once the eggs were gone for the season, we would move our camp to the mouth of the Tugumeniq River to gather fish for the winter. Our summer house was one of the earlier homes of the lead reindeer herder in the area, who also had an old slaughterhouse nearby.

We had a fish drying rack onshore where throughout the summer and fall we would fill it to the brim with cut pink salmon, which made the best dried fish because of its smaller size. My older brother Floyd and I would provide the labor to hang fish placed in 5-gallon buckets by Mom and Dad. They were always full of slime and cold water and we would become wet with the smelly stuff. Floyd often complained loudly that the family would bypass his birthday (July 6) just because we would be busy processing and drying fish. That happened every summer.

In fall we would once again move our camp to a small, rocky beach location called lggoagnuq, about 30 miles from the village, and along the upper end of the Norton Sound. Here we would gather our ducks and geese for the coming winter, all of which were cooked and canned. During the bird migration south, geese and cranes would fly overhead for days on end. Their calls could be heard day and night as they flew at an incredibly high altitude. The ones that stopped by our camp were easily taken for our food stocks.

lggoangnuq was a place of mystery. A strange ambience filled the air. While it seemed normal, bones and prehistoric hunting tools found here and there told that it was a special place for Mammoth elephants. Perhaps this is where they came to die, or were in the area when a catastrophic event blew them to extinction. The edge of the ocean near our campsite was littered with giant mammoth teeth, which weighed at least 10-20 pounds each. Once in a while, we also found pre-historic flint arrowheads and arrow shafts used by hunters of old. Somehow, I knew my ancestors walked these hunting grounds, made camp here, and lived and died here.

We never wandered to the top of the small cape. It stood about 100 feet high and could be seen for miles. Whatever might be there is unknown to me to this day. Not knowing what to do with these finds, we often buried them for safekeeping. Once when the tide went out more than at any other time, there appeared in the shallows of the Sound what I thought were curved trees standing on end. Instead and upon talking to people who knew about such things, they were Mammoth tusks sticking out of the mud about a mile from shore.

Here at our fall camp, my brothers and I provided most of the game birds for Mom and Dad to cook and can. We each had shotguns and .22-caliber rifles with which to hunt. We enjoyed the days spent at lggoangnuq. There are many good memories from that campsite.