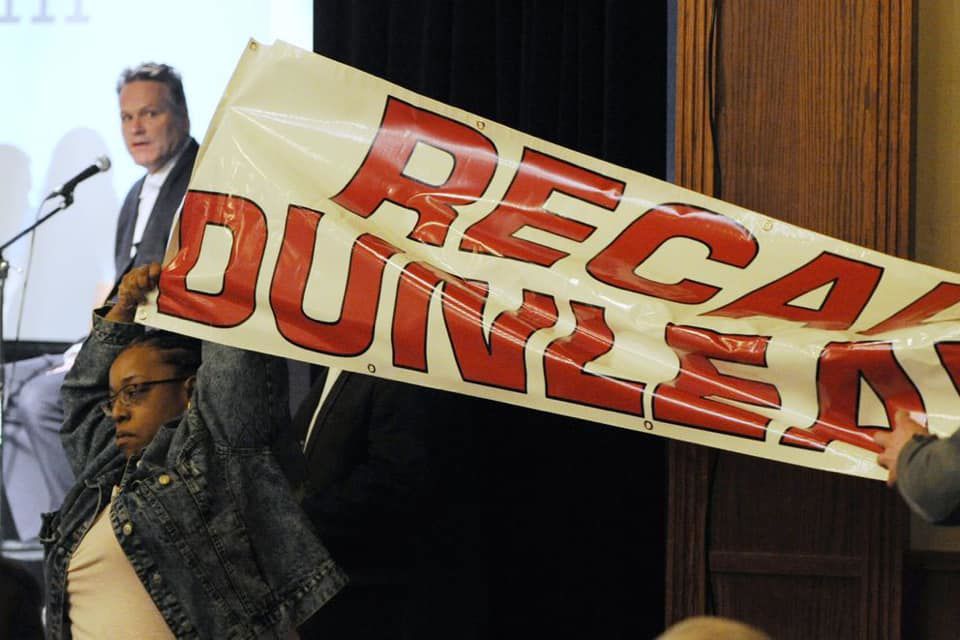 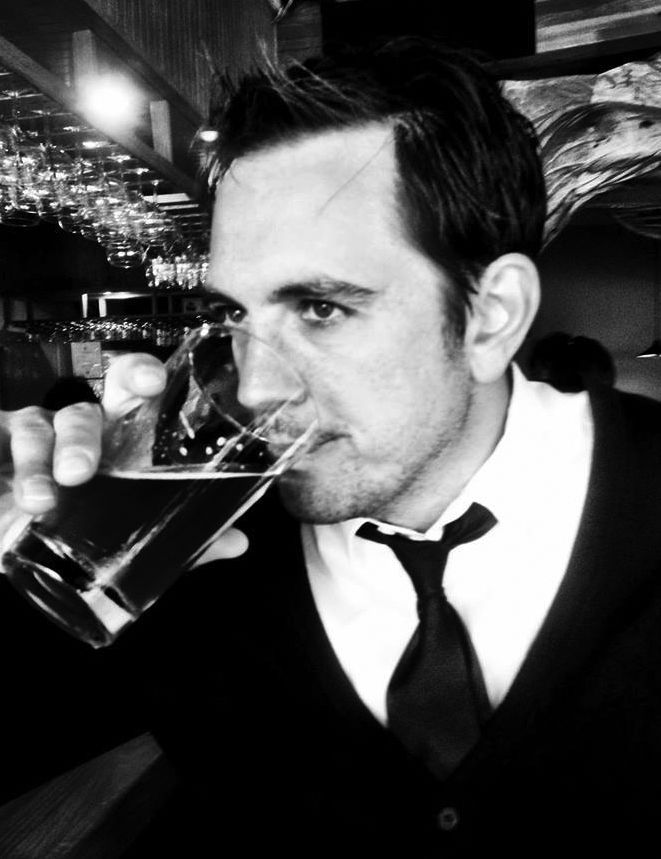 A hot-as-balls Sunday at the Lutheran Church on 15th and Cordova, where afternoon services were just letting out with the Lord’s Prayer, about to give way to a meeting about homelessness in the impending world according to Mike Dunleavy, was about the only place to catch up with the core behind the Facebook group ‘Alaskans For Recalling Governor Mike Dunleavy.’

Ryan Anderson, one founding member of the group, which established itself three days after Dunleavy announced more than $440 million in additional cuts on top of an already svelte budget approved by the Legislature, caught up to me inside the church. Sweating through his long, chewy hair under a trucker’s cap, he was breathless and sucking on a Powerade. He told me he’d just run six miles.

It was too damn hot to stay curious about my confusion, so I got right to it: “What spawned this Recall Dunleavy group you guys put together? How’d you do it?”

“It’s like, if you were on a bus, and weren’t paying attention, and all of a sudden the bus driver went nuts and started driving off a cliff...” Anderson said before pausing to take another swig. “We’re just in the front row and we said, ‘we gotta attack that guy.’”

Anderson said his ‘woke’ moment came in his role as executive director of Out North. Expecting budget cuts to the state Council for the Arts, he moved the organization to cheaper rent in Spenard and thought he’d be able to weather the storm.

“I had 12 meetings with people in one day and every person I talked to said they were leaving the state,” he said.

Anderson connected with Derek Reed, a local teacher and activist, along with his friend of 10 years Mike Mason, and Erin Jackson-Hill, who stole the show at Dunleavy’s Koch Brothers-sponsored road show at 49th State Brewing Co. in March when she snuck past a heavily staffed goon squad toting a banner that said in big, red letters: RECALL DUNLEAVY. Together, they formed the first governor recall group that is known to exist, to date. Little more than a sweaty-busy Facebook Group, so far, ‘Alaskans For Recalling Governor Mike Dunleavy’ grabbed their 1,000th follower as we spoke.

“Once he got elected, and I knew especially after the Koch Brothers were involved, I knew it was going to be the corporatocracy of Alaska. I thought, ‘I can’t let that happen,” Jackson-Hill said. “Not just the cuts to the university, but what about the social services? I drive to work every day on the corridor by Bean’s Cafe and it’s gotten worse in just the last year. What’s going to happen when these cuts go into place? I’ve lived here my whole life and I never felt unsafe, but I do now. People talk about crime and some people think ‘it’s not going to affect me, I live on the Hillside, or whatever.’ But everyone has to live in Anchorage and it will come home to bite you.”

Dunleavy’s blatant association with the Koch Brothers’ ‘Americans For Prosperity’ was what compelled Mason to get active, too.

“I’ve seen what Dunleavy’s done to the state. He’s going to turn it into a resource extraction colony for the Koch Brothers, slashing every vital public service that makes this a liveable community,” Mason said. “All the reasons someone might set up with a family here is being stripped away. Why raise a family in a homeless-filled, drug-infested prison state? There’s no future for this state with these cuts.”

As much as the above quotes might sound like classic agitprop hyperbole, a ton of respected journalistic sources nationwide and worldwide, including conservative leaning publications like Forbes Magazine and The Guardian UK, have echoed a same warning: That the policies of the Alaska governor are sure to be ruinous for the state and are reminiscent of the disaster that befell Kansas when then-governor Sam Brownback fell under the influence of the Koch Brothers and disaster ensued.

Given all of this almost universal condemnation of his budgets, coupled with his bat shit crazy insistence on paying out a $3,000 PFD, one might wonder why the governor is holding on so tightly.

“He’s pot-committed,” Anderson said. “He said he wasn’t going to do this. That was the banner he rode in on — full PFD, not cut, keep the ferry, it was all going to be great. To me, the worst suspicion is that it’s a smash-and-grab for the state — attack the press, public education, anyone who might be a good steward of natural resources and then tank the economy so everyone who is left is dependent on extraction industries… They’ll never be able to argue with you; then you can do whatever you want. I’m not a huge conspiracy fan. To me, this is just a mysterious, crazy person trying to wreck everything.”

But even if you have the majority of the populace behind you, recalling a governor isn’t so easy.

“None of us really know the process,” Anderson said. “From what we can tell, you have to get 10 percent of the folks who voted in the last election to sign a petition, which you do yourself. You get that certified with the Board of Elections. Then they give you booklets and you have to get 25 percent of the general populace, so number-wise you have to get about 25,000 to start with 70,000 after that, based on that. Once you do that, the division of elections certifies it and then you can have a special election.”

But even that may not get it done.

“We may have to sue because the Lt. Governor oversees the Division of Elections, and depending on how honest they are, it may have to go up to the Supreme Court, fight it all the way through,” Anderson said. “The last time this was tried was Hickel-Coghill in ‘91. That took two years almost to get to where they were able to do the recall. Ironically, they recalled them because they were spending too much and everyone was saying, ‘slow down, you’re going to bankrupt us.’ By the time it was time for the special election, the administration had calmed down, straightened out, but here we need to move as fast as possible to try to effect what’s happening.”

The first hope at trying to avert the cliff the alleged madman is driving the bus off of, would be to get 45 of 60 House and Senate members to override Dunleavy’s line-item vetoes.

As impossible as getting 75 percent of lawmakers to agree in a bipartisan manner on anything, the wholesale rebuke and jeremiads predicting what will happen if they don’t get to 45, has our heroes optimistic — somewhat.

“There are actions planned for every single day,” Jackson-Hill said. “Portugal. The Man is up here, we’re getting a lot of national attention. Eyes are all on (Dunleavy). I think he’s bought and paid for and I don’t think our legislature is used to this kind of attention. We reached out to some of them — Mia Costello (Sen. R-Anchorage), we brought her flowers and said, ‘for your community, don’t let this happen’, and she was nice enough… but I still don’t think they’re feeling what the rest of Alaskans are feeling. It’s like they’re in a cocoon.”

If that 75 percent threshold was met, however, would the group still push for recall?

“If they did complete the override I think we’d start talking about talking about how necessary this was. I imagine some would want to keep going,” Anderson said. “We’re expecting a mass exodus from the state in January. UAA has probably one more semester left. None of us want to do this, but we feel like we have to. I really hope there’s a push for everybody to call their legislature and beg them to please undo this, but if they don’t we’re the next best bet trying to avert a disaster.”

The group said they have no idea how much such an effort will ultimately cost. Anderson said he’s funding it so far out of pocket.

The first need they say they’ll need is money for an accountant and lawyers, or accountants and lawyers — especially with expertise in election law — willing to work pro bono.

For more information, visit the group on Facebook, now up to 1,145 members as of 7 p.m. Monday.