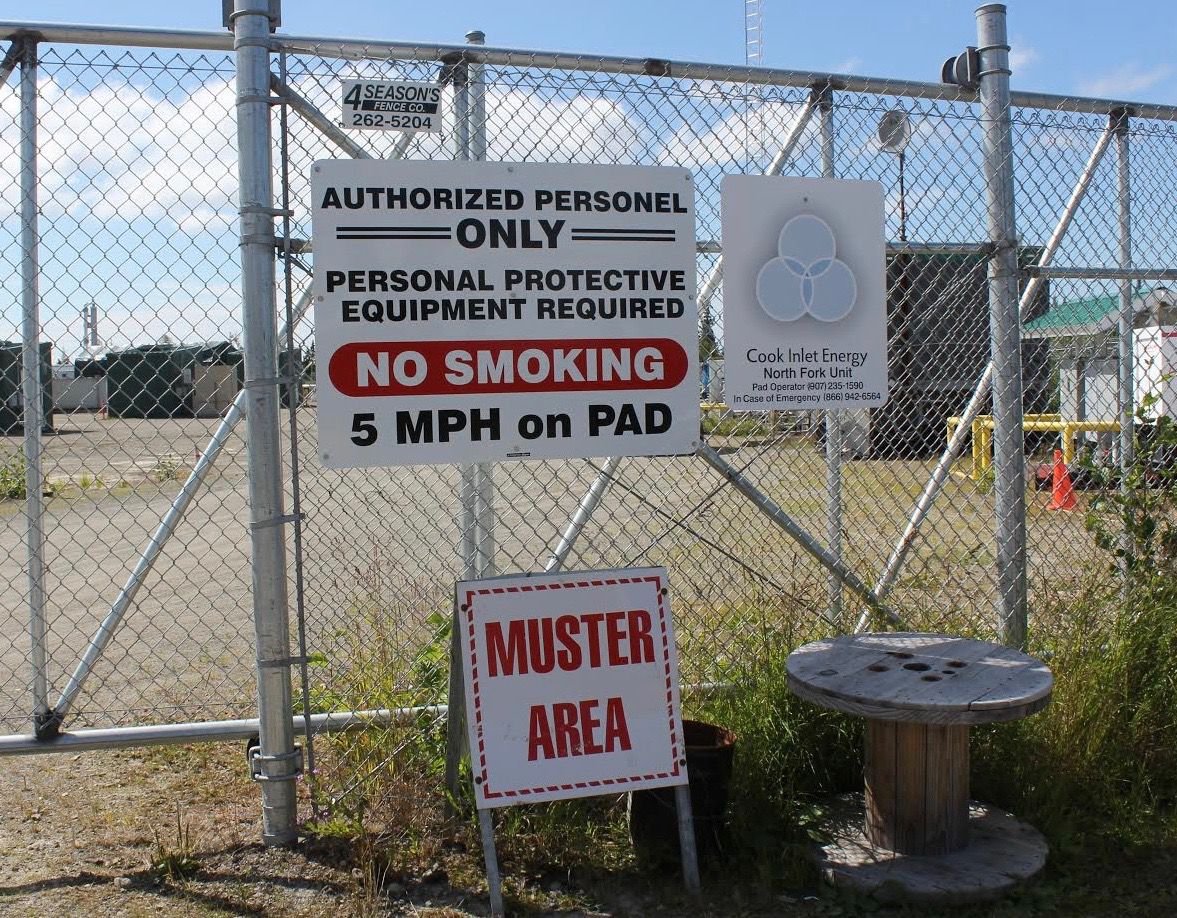 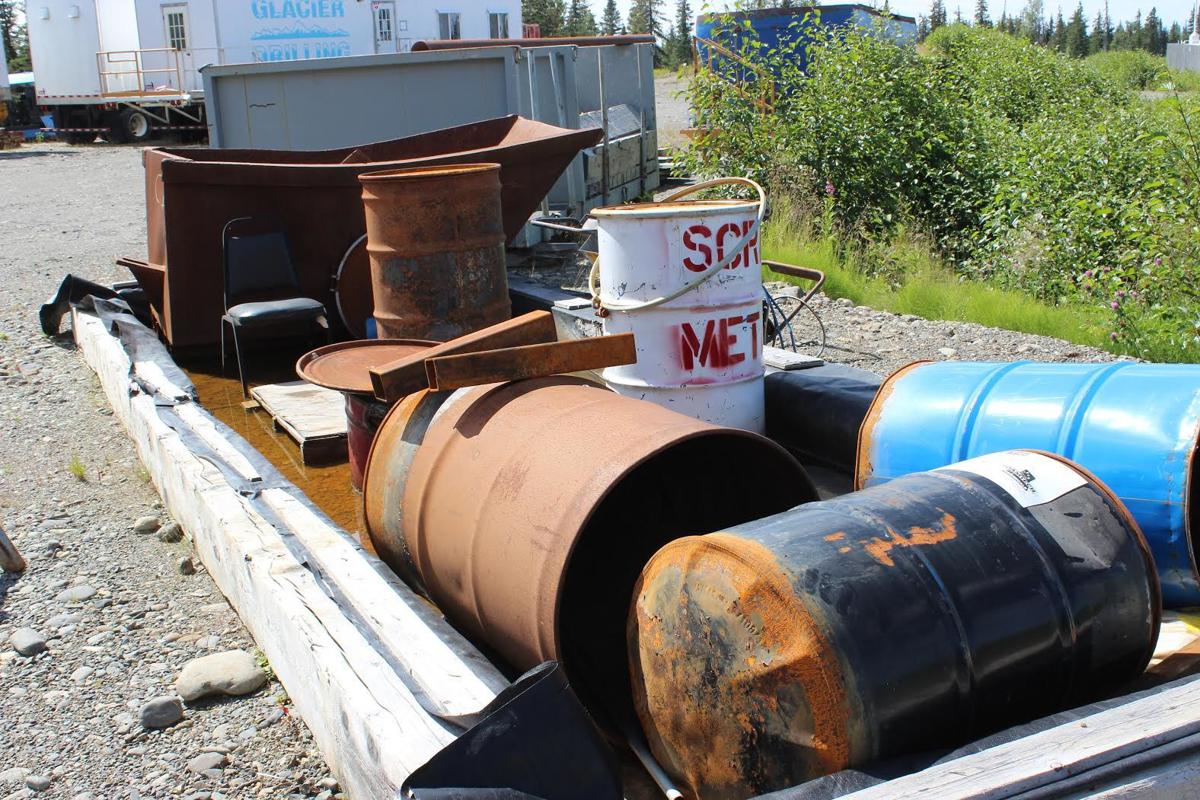 {div}Fluids from rusted drums and other discarded containers are held within a bladder attached to logs near the natural gas pad on North Fork Road. Photo by McKibben {span class=”il”}Jackinsky{/span}{/div}

{div}Fluids from rusted drums and other discarded containers are held within a bladder attached to logs near the natural gas pad on North Fork Road. Photo by McKibben {span class=”il”}Jackinsky{/span}{/div}

Editor’s Note: This is part five in a 7-part series addressing the challenges Alaskans face having the oil and gas industry as neighbors.

Campaign signs posted in front yards? Seen ‘em. But the ‘Drill, Baby, Drill!’ sign in the yard of a home on Anchor Point’s North Fork Road was an attention-getter.

I was familiar with the phrase. What Alaskan wasn’t? When the state’s once-upon-a-time-governor Sarah Palin unsuccessfully campaigned as the Republican vice presidential nominee, “drill, baby, drill” was Palin’s go-to chant in support of domestic sources of energy, namely Alaska’s “billions of barrels of oil and hundreds of trillions of cubic feet of clean, green natural gas.” That was in 2008. It was 2011 when I saw the yard sign. Palin’s push to be one heartbeat from the presidency was a thing of the past.

This wasn’t a faded campaign sign, though. It was about something a little closer to home.

Over the years, numerous attempts had been made to lower Homer’s energy costs by providing the city with natural gas. In 2010, then-Rep. Paul Seaton (R-Homer) crafted a plan to help make that dream come true and Homer City Council added it to its legislative priority list. Then-Gov. Sean Parnell wasn’t so quick to get on board, however. He vetoed all but $525,000 of Homer’s $4.8 million grant request, but Homer remained hopeful and used the half-million to contract with ENSTAR Natural Gas and begin work on what they knew would be a multi-year project. The following year, Parnell redlined a $10 million grant request from Homer. Undaunted, Homer officials maintained their optimism and continued working with ENSTAR. The following year, Parnell approved $8.1 million to construct a pipeline link between existing North Fork gas wells and Homer. A Homer voter-approved special assessment district assured funding for the necessary distribution lines within the city.

When I saw the “drill, baby, drill” sign, I knew it expressed the homeowner’s support of work occurring on the nearby drill pad that would finally provide Homer residents with its long-wanted natural gas.

Mark and Juley McConnell were the homeowners responsible for the sign. They had purchased the property nine miles east of Anchor Point in 2005 and moved their family onto it two years later. Located where the paved portion of North Fork Road gives way to a traveled surface that continues into nearby hills, the McConnell’s triangle-shaped parcel overlooked the Anchor River’s North Fork.

Mark recalled the neighborhood being notified that work was to get underway on the well pad, so the family wasn’t surprised when equipment started arriving and a drill rig was put to work.

“Of course there’s noise when the rig was going, but it’s like any other noise, you get used to it,” Mark said.

Likewise, Juley had no complaints.

“It’s been loud, but not disturbing. Trucks go by, but the traffic is not any worse than it was, and for us it was OK because they kept us sanded out here,” said Juley, thankful for efforts to make the narrow, winding North Fork Road safer during winter conditions. “They’ve been really good to us.”

Part of that good treatment was Mark finding temporary employment as a heavy-equipment operator for a locally owned service company working on the pad.

The McConnells’ yard sign inarguably made sense, but their neighbors Rick and Lori Paulsrud offered a different perspective. They lived next door to the drilling operations with only a thin line of spruce trees bisecting the 300 feet between their home and the pad. It was insufficient for deadening the constant noise or blocking the always-on lights.

“We’ve lived here almost 11 years and if we’d had any idea when we bought this house that this was going in next door, we’d never have considered it,” Lori said.

The wall of their home that faced the pad was windowless, which offered some shelter from the constant work, but “probably the worst was when they were doing flare testing,” Rick said, recalling “one time that (the flare) went on for about a month. … It sounded like you were listening to an airport with jets taking off.”

Brokenhearted by the situation, the Paulsruds considered moving but were told by a realtor that the value of their property wasn’t as high as it had once been.

“Who wants to move in next to a gas well?” Lori asked rhetorically.

What stood out then, and remains striking about the situation in which the McConnells and Paulsruds found themselves is that the situation was due to Homer’s desire to improve its quality of life. Ironically, years of careful planning and millions of project dollars failed to take into consideration those living closest to the improvement’s source. No thought was given to the impact on the McConnells and Paulsruds.

Mark and Juley are no longer married and Juley has relocated. Discouraged from selling their home, Rick and Lori continue to live next to the well pad.

“We still deal with noise pollution,” said Lori. “Another thing that happens, but not all the time, is an odor that comes from the gas wells. I don’t know what it is, but it isn’t something I want to breathe.”