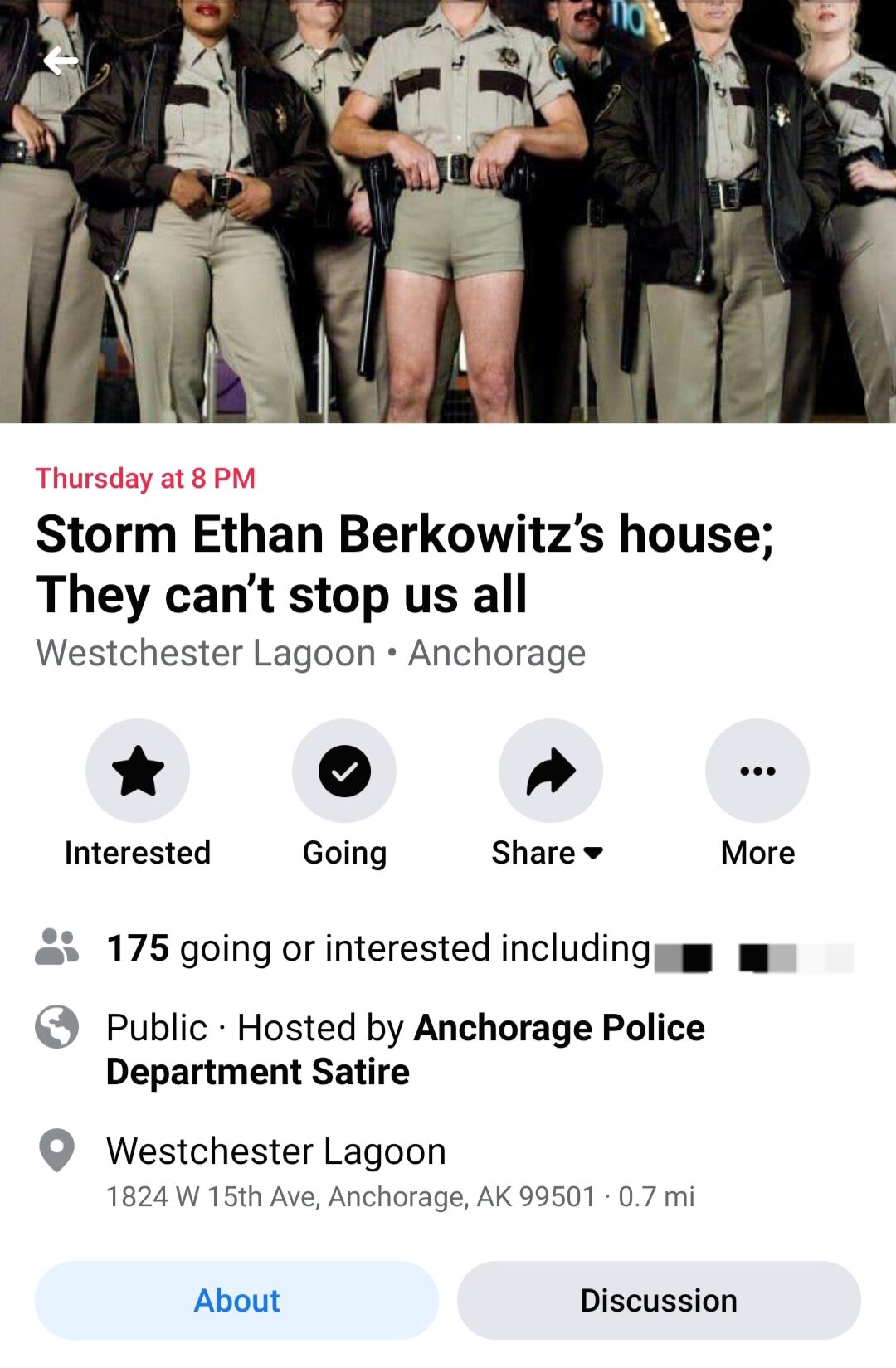 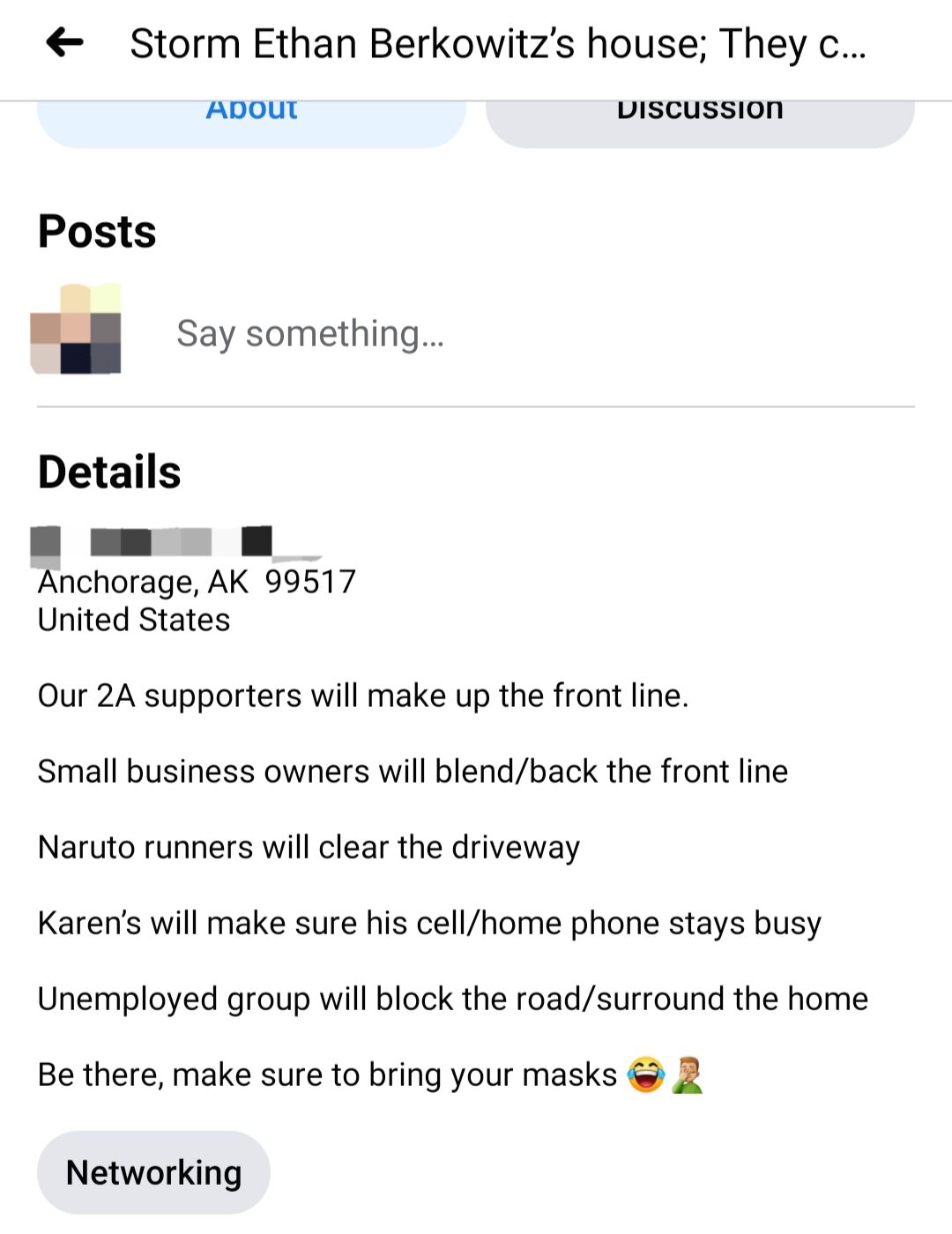 The event calls for arming up, blocking access to/from the mayor's private residence, and jamming his phone.

The event calls for arming up, blocking access to/from the mayor's private residence, and jamming his phone.

Alaska has no shortage of nutters. Someone once told me that people flock to the Last Frontier for three reasons — or three M’ — Money, Military, or Mischief. You either found an opportunity, you are in the military, or you’re fleeing some kind of trouble in the Lower 48.

While I have no idea which of the three reasons led the admin of “Anchorage Police Department Satire” or his progenitors to Alaska, it’s clear that what he’s here for now is Mischief.

The page flew mostly under the radar until Sunday, when the admin decided to take a page out of last September’s popular “Storm Area 51” event. The difference is that those shenanigans were cheeky and fun, and these planned shenanigans are cruel and tragic.

The event page “Storm Ethan Berkowitz’s house; They can’t stop us all” calls for an armed mob to march down to the mayor’s house, trespass onto his property, and jam his phone lines, presumably so that he can’t call the police for help.

First up in the event description, they post the mayor’s alleged home address. Then they call for armed protestors, no doubt a tactic of aggression and intimidation. “Naruto Runners will clear the driveway,” the description continues, invoking a meme created onsite at the Area 51 rally. “Karen’s will make sure his cell/home phone stays busy.” “Unemployed group will block the road/surround the home.”

While the stated purpose of the page is satire, there is an underlying disdain for police throughout the page. It’s the same kind of blind rage you hear from unstable defendants in traffic court.

The problem is explained by ‘Schrodinger’s Douchebag,’ which describes a guy who says really offensive shit and then determines whether or not he was kidding by the reaction of his audience.

Barricade a democratically elected official in his home, surround him with armed lunatics, and purposefully prevent him from escaping or calling out for help? You can practically hear the rimshot after that zinger. Why stop there? Make the full transition to a swarm of brainless zombies and eat the poor bastard alive.

Admin can claim that this is all a joke but, just as we saw in the Area 51 rally, a small percentage of people may still show up, having taken the event at face value. If, God forbid, people were to show up and somebody — anybody — was injured, no one will want to hear the “It was just a joke” defense. And I guarantee the Anchorage Police Department isn’t laughing, either..

Like it or not, Ethan Berkowitz was elected by the people. He is our chosen leader, and leaders are forced to put their face and name and identity on difficult decisions. They don’t make decisions lightly and they don’t magically shake the burden off when they leave the office because a public leader never punches out. The least you petulant anonymous cowards can do is let the man feel safe in his own home.