Spewing virus-laden droplets may not be the only way animals can spread some viruses through the air. Viruses like influenza might also hitch a ride on dust and other microscopic particles, a study in guinea pigs suggests.

People can transmit respiratory viruses, like the ones that cause flu and COVID-19, just by talking, coughing and sneezing (SN: 4/2/20). Virus-contaminated surfaces, called fomites, can also cause infection when people touch the surface and then their nose or mouth. Now new research suggests that dust particles kicked up from those contaminated surfaces, called aerosolized fomites, may also spread such respiratory viruses.

“Our work suggests that there is a mode of [virus] transmission that is underappreciated” for influenza, says William Ristenpart, a chemical engineer at the University of California, Davis. “It’s not on [scientists’] radar.”

Though the study, published August 18 in Nature Communications, did not include the new coronavirus, or SARS-CoV-2, the finding could have implications for that virus too, Ristenpart says. Researchers are still figuring out all the ways the coronavirus spreads, including debating how much smaller respiratory droplets that remain in the air, called aerosols, might contribute to transmission (SN: 7/7/20). Hantavirus, which causes a deadly respiratory disease, can also be transmitted through kicked up dust that is contaminated with rodent droppings. But that virus doesn’t pass from person-to-person.

The researchers then used a paintbrush to coat virus on animals that had already been infected and were immune. Each virus-covered rodent was put in a cage separate from, but attached to, a cage housing an uninfected companion. The setup ensured that the only way to spread the virus from one animal to another was through the air.

Although the flu-covered immune rodents were not breathing virus into the air, the flu still spread among three of 12 guinea pig pairs. The newly infected animals may have gotten infected from aerosolized fomites in dust kicked up from bedding or fur, the study suggests.

Some common items people use could be potential vehicles to spread respiratory viruses via aerosolized fomites, or dust kicked up from contaminated surfaces. The graph shows the number of particles emitted per second over time when rubbing together pieces of toilet paper (blue), paper towel (red) and lab wipes (black) to produce dust. 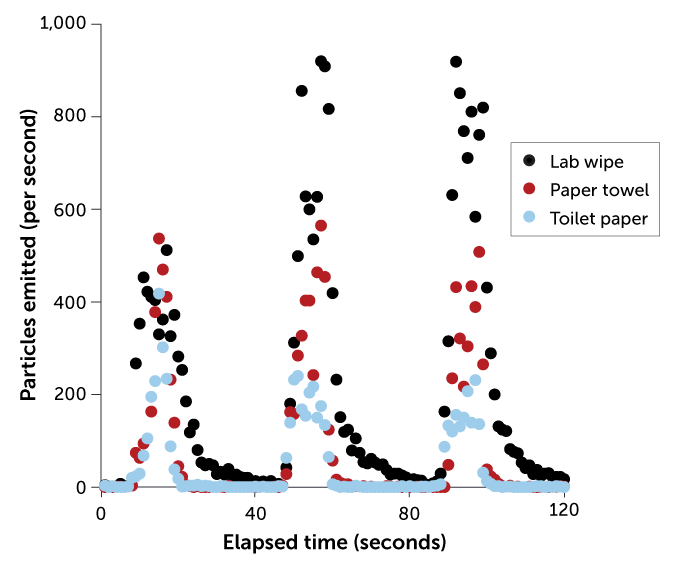 “It’s not that all dust is infectious,” Ristenpart says, but “dust liberated from a virus-laden surface” may be.

In human settings, that dust might come from used tissues, sheets or blankets. Or perhaps from a doctor’s personal protective equipment or a cloth mask. In a preliminary study that has not yet been reviewed by other researchers, Ristenpart and his team found that homemade cotton masks can shed minuscule particles when people breathe, making them a potential source for aerosolized fomites.

It’s unclear what the results might mean for respiratory virus transmission among humans. While it is possible that aerosolized fomites might spread influenza, people would still need to breathe the virus in to get infected, says Julian Tang, a virologist and fluid dynamicist at the University of Leicester in England who was not involved in the work. Dust from guinea pig bedding may be aerosolized much more easily than from a medical professional’s personal protective equipment or bed sheets. So compared with airborne influenza virus — or SARS-CoV-2 — in exhaled breath, “I’m really not convinced that in humans, this aerosolized fomite route will play any [major] role,” Tang says.

Read the original version of this story at sciencenews.org