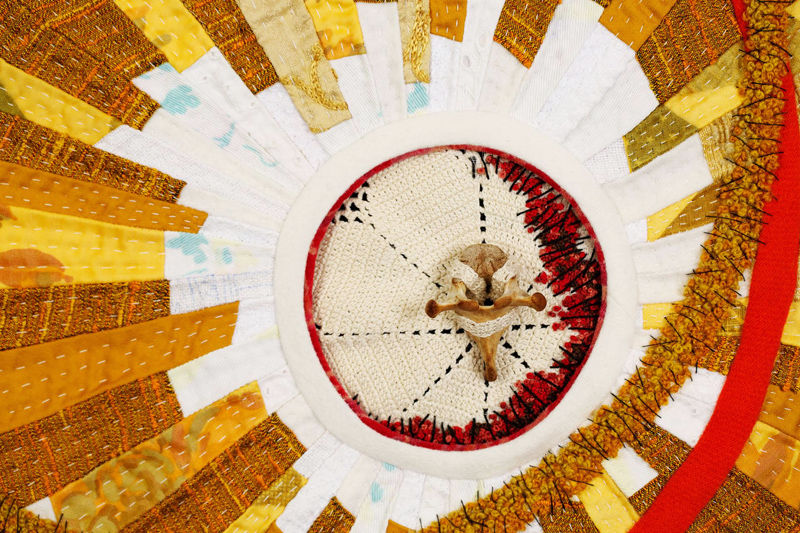 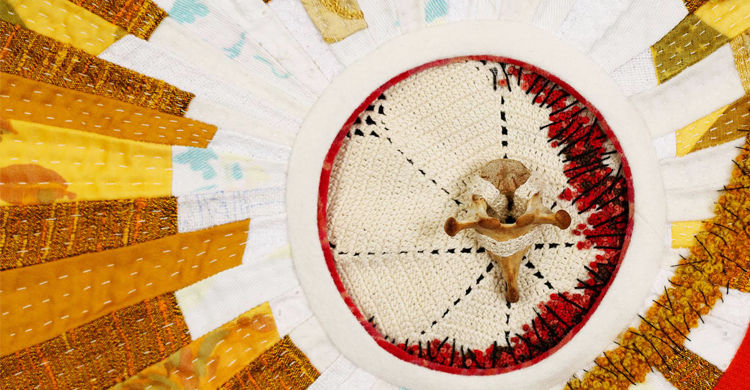 "Mama, what in this house can catch on fire?"

"I will catch you and then."

Here, old cloth becomes bedding for the lost, found and treasured-rocks, teeth, bone, an iron ring, an old key, a collection of burnt out matchsticks.

Meissner's needlework is flawless. She learned embroidery, sewing, knitting and crocheting from her mother as a young child. "If the back didn't look as good as the front, I had to pull it out and redo it," she said. "I still have a muscle memory of doing the perfect stitch over and over again. But I don't want that. I want chaos."

But her chaos looks seamless, the "flaws" by design.

Meissner, 44, started her first career as a seamstress, pattern maker, and clothing designer, mostly of custom wedding dresses. She started at 17 and burnt out at 30, she said, so moving to Anchorage gave her a fresh start. Her husband architect Brian Meissner got a job in town, and they drove up from Vancouver in 2000.

So began her second career as an illustrator, in which she illustrated 18 children's books while getting her master's degree in creative nonfiction at the University of Alaska Anchorage and later starting a family.

After the birth of her second child, the deadlines and ragged sleep schedule took their toll. "When the stress of trying to update my illustration portfolio triggered a bout of what was essentially a third round of postpartum hair loss, the doctor looked me in the eye and said, 'You can remove this stress, right?'

"So I returned to the work that I could do with children at my feet," Meissner said. "Something easily worked on, put down, then picked up again. There is a reason why handwork has been done for ages."

She used to be dismissive of these skills, she said-the painstaking needlework in doilies and embroideries, the hours spent on seemingly needless things-but now she gets it, not just the how and why of it, but the deeper meaning of the work, the teaching, the time spent together stitching, the drive to make things well.

Take the 70 potholders from Sweden that came to her; she marvels that women spent precious hours making them. "This is what they took the time to do in poor light, with so much other stuff to do," she said. "The urge to create and make is really, really, really strong."

Piecing together her story

Meissner starts a piece where someone else left off.

"The last place I feel inspired by is a quilt store," she said, "but I go to Value Village, or to garage sales, and that's where I find inspiration. I think it has to do with things living a life already and already having a purpose. They still have a life in them."

So she goes on weekly quests for unfinished or castoff tablecloths, embroideries and needlework. She hits the thrift stores and garage sales. She repurposes what relatives in Sweden have given her. She resurrects the linens and doilies sent by people she doesn't know, but who hear about her quest for old materials through social media.

When possible, she finds out who made and owned the materials she receives. She logs the details she can find. They are part of the story.

Much of it comes to her stiff from starch after years in a hope chest, a hutch, or in boxes. "They still have the perfumey smell of old ladies," she said. "After I launder them, they get really soft. If something's going to blow a part, that's when I want to know."

Much later, after finding the right use for the material, and figuring its place in new work, she honors the layers of cloth by writing label note like "Vintage domestic linens & drapery," or "Abandoned quilt, cotton voile, vintage domestic linens, unspun wool fiber, found objects "

Her good friend Gina Holloman, co-owner of the Blue-Holloman Gallery, said Meissner once told her that part of her job in this life "is tidying up the lose ends that others left hanging."

Meissner's solo exhibit, Reliquary, asserts this sanctity through its re-creation of the context and story of found objects and collections sewn and fastened into old cloth. The show first appeared at the Bunnell Arts Center in Homer in 2015 and will show at APU this month.

Asia Freeman of the Bunnell Art Center said that Meissner "very cleverly maneuvers nostalgia and respect for handwork without succumbing to frivolity and function, roles that have crucified 'feminine arts' historically. Her works are built from a great deal of time and remarkable skilled labor."

Because of the nature of needlework, its tradition and domesticity, the work tackles themes like fear, loss, love and anonymity with an accessible tenderness and fierce fastidiousness.

The work in Reliquary also "made bold some real and abject experiences, from menstruation and parenting to aging," said Freeman. "She constructs her work around these experiences-incorporating stained cloth, missing teeth and broken bones, lost keys, found things, and her children's questions and drawings. Amy is inspired by the reality of living and makes enigmatic reliquaries of that. Along with her own work, her reliquaries contain found doilies and fine textiles of all kinds. She admires and celebrates anonymous women's workmanship, while cutting those found bits apart and piecing together a new story, her story."

Her place as a cog

Meissner talks about her three creative careers: Her first love of clothing design, her second of book illustration, and her third of making textiles, or what she calls on her website, a new journey.

Her passage began in 2013 with a juror's choice award in the Earth, Fire & Fibre show at the Anchorage Museum for "Spontaneous Combustion," a piece with block letters that repeat the phrase, "Mama, what in this house can catch on fire?" on a canvas of vintage cotton linens.

The line come from her son, now nine, who repeated the phrase over and over for more than a year after tripping a smoke alarm by putting a penny on the prongs of a nightlight.

"The pieces was my response to post-partum anxiety and depression," said Meissner. "I was what was spontaneously combusting."

Early on, she had felt unable to make the art she wanted to when stuck within the framework of motherhood, the needs and messes, the everyday and day after day chores, but eventually the scraps of words she heard, the objects her children collected, the time they spent together began to call to her, asked her to see it, and the work began to bloom.

A Rasmuson Foundation Individual Artist Award in 2014 further prompted her dedication to the studio and her work, she said. Her textiles have been accepted in shows in Homer, Fairbanks and Anchorage, with merit awards in the 2016 All Alaska Biennial and the 2014 All Alaska Juried shows. She also got work into three group shows in New York, including the New Directions '15 29th Annual National Juried Contemporary Art Exhibition at the Barrett Art Center in Poughkeepsie, New York.

Her work in Reliquary paved the way to other bodies of work, including the "Girl Story" and "Vein" series, plus some larger pieces that may take years to complete.

In one of her pieces, "Come find me," she stitched those three words over and over in lower case letters along the outer edges of a textile adorned with embroidery and a swath of overstitches. Those were the words of her daughter, now seven, who got tired of playing with her brother one day, but stayed hidden away while saying over and over, "Come find me."

As a writer, too-one of her essays, "Swallowing the Needle," was nominated for a Pushcart Prize by Cirque literary journal-Meissner hears in her child's words the story of what it means to live, to feel, to need, to lose, to not know, to want to be heard.

"My work with textiles is domestic and rooted in old skills, but it's still charged and thoughtful and deals with subject matter that is personal but seems to trigger a nerve with viewers that feels more global," she said. "I've been likening it to reading/writing memoir-an author lays out and reflects on a personal narrative, and the reader comes to the page with his/her own history to apply to and connect with the experience. I'm trying really hard to keep that balance in mind. If the work is too personal, it's navel-gazing; too global and it's thematic crap."

In many ways, the work accomplishes this personal-global balance by capturing a sense of the moment entwined with a perceived timelessness. Her mastery of thematic canopies and understories matches her mastery of materials precisely.

"Amy is the consummate artist from the bone to the soul to the bottom of her heart," said Holloman. "She can't do a thing without it being art."

In a recently finished piece, Meissner stitched the words "Mend. Wound. Mend. Wound." in black letters along the border of a layered textile rich with the hues of blood and body. She calls it "Inheritance."

"I really could not do this work if I didn't have children," she said. "They bring to me a different way to look at my life as a woman, as a mother, as a daughter, as a cog."

Amy Meissner's solo show, "Reliquary," will show at Alaska Pacific University's ConocoPhillips gallery from Feb. 5 to 28, with a First Friday opening on Friday from 5:30 to 7:30 p.m.

Her work will also appear two other exhibits in Anchorage starting this month:

The "Art Cloth North II" juried show of Alaska members of the Studio Art Quilt Associates at the Blue-Holloman Gallery from Feb. 5 to March 1, with First Friday hours from 5 to 8 p.m.

She also has pieces in several art shows out of state:

The Every Fiber of My Being exhibit at the Taplin Gallery at the Arts Council of Princeton in New Jersey March 5 to April 17.

You can also find her work at amymeissner.com.