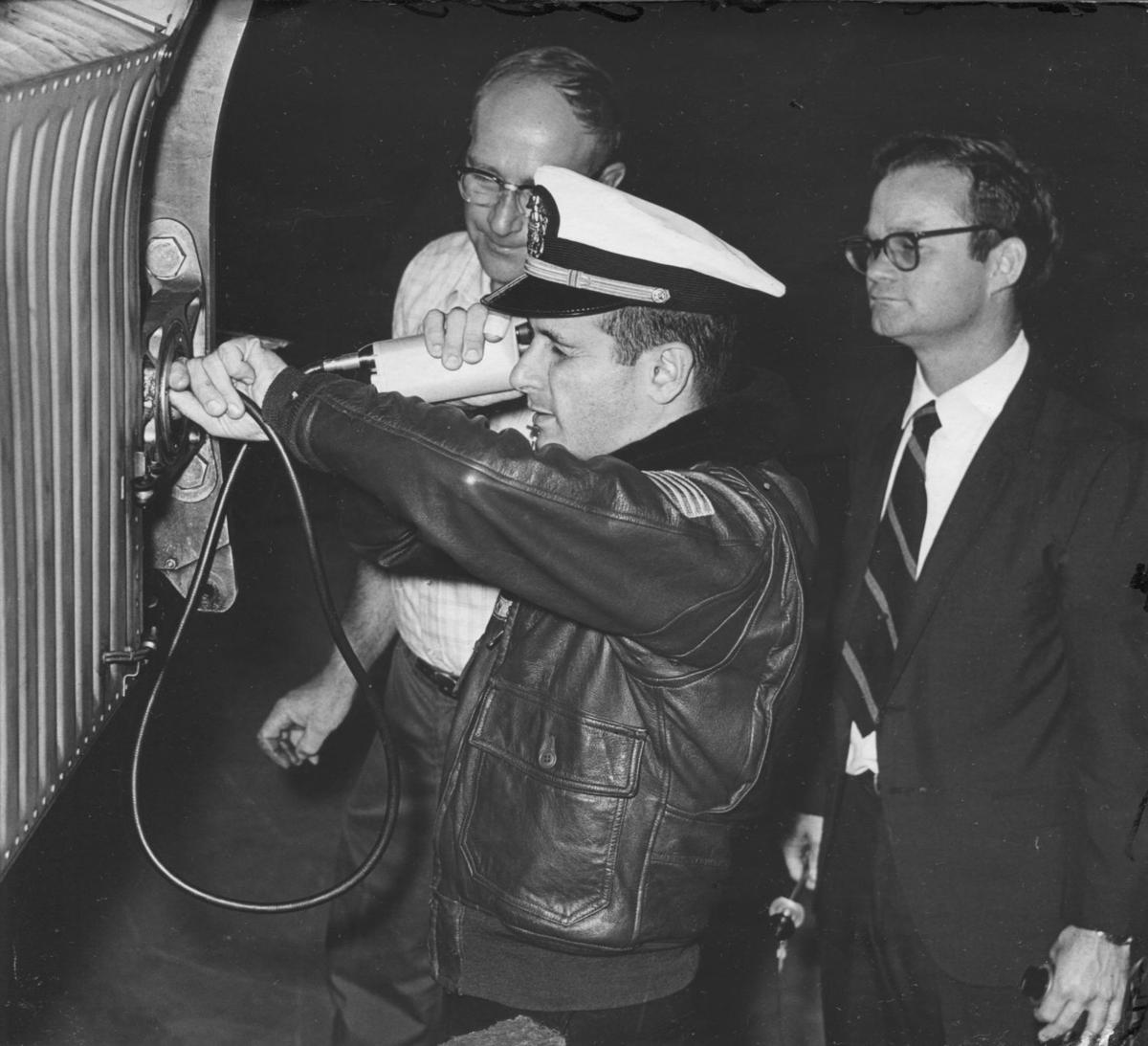 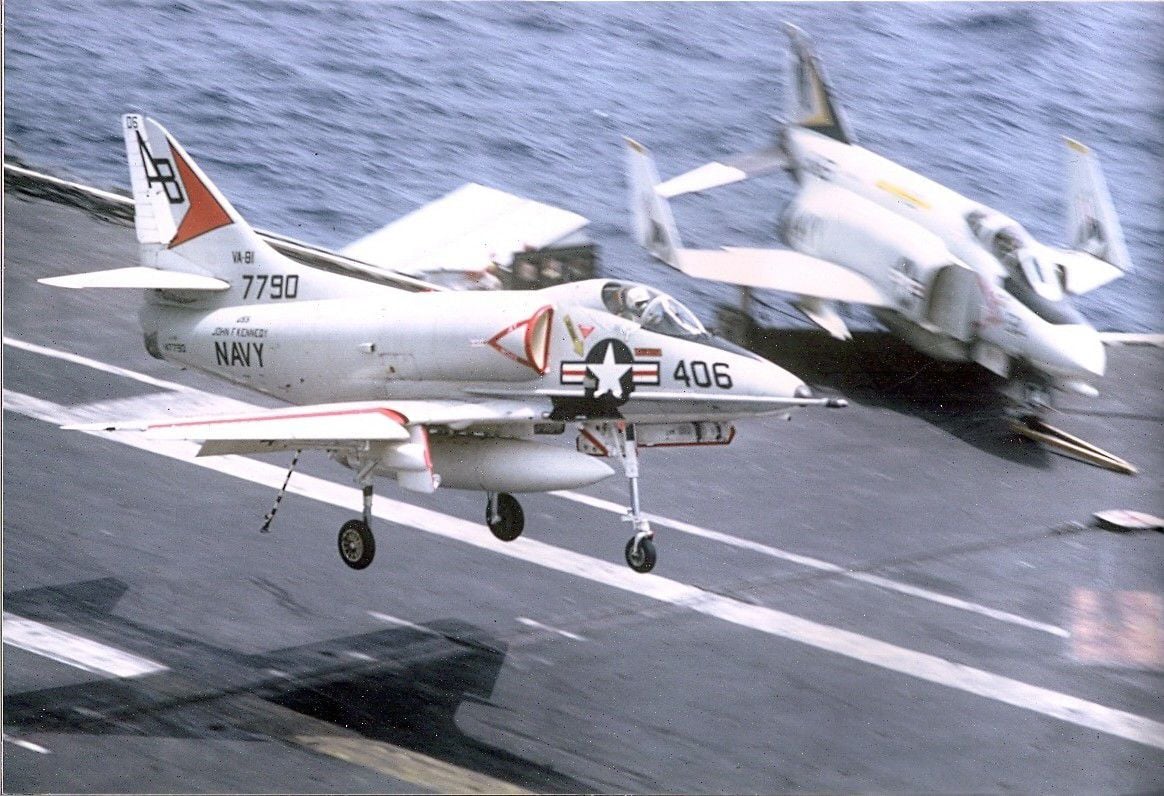 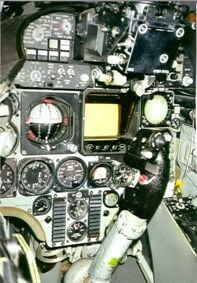 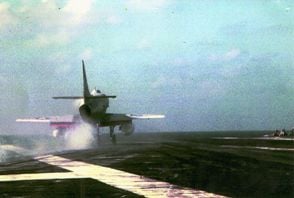 Captain Les Horn, United States Navy (retired), lives in Eagle River. Here he tells his story about a fateful flight in 1966 when he and his radioman were chased by a UFO. Captain Horn has extensive background in flight and airborne weapons systems testing, 26 years of service, 5,600 hours flying time in 34 aircraft types and models, and is a member of the Society of Experimental Test Pilots. He holds advanced degrees in physics, nuclear engineering, and energy resources.

We were flying a version of the A-4 that was used for carrier training. There was room for two pilots. You kind of team up with the guy you worked with and you’d take turns on the radios or driving the airplane.

We flew to Bunker Hill Air Force Base in Missouri. This was a late afternoon/evening flight to try to get some night time. We departed right about at sunset, and I was driving. As we launched out of there, we started our usual climb.

So, climbing out of Bunker Hill, we were passing 16,000 feet for flight level 470. Usually when you’re in the more powerful military aircraft, you can take the higher structure, because the 30s are usually crowded with airliners, but up there we know we probably only had military pilots to deal with. We were passing through the 20s going into the 40s. And as we started out, we were talking to departure control and he handed us off to Indianapolis center. And that was about a half-hour after sunset.

And so Indianapolis called up and they said “we have Delta departing Chicago Midway. He’s passing through 16,000 on route 330 passing your nine o’clock position, will clear,” and I look over and say, “tell your traffic,” and we continue to climb. Meanwhile, I picked up a blue dot of light. I expected him to call that traffic sooner or later because it’s kind of crowded in the Indianapolis-Chicago axis.

Then, finally, this light was getting a little lighter, brighter, so I said, “Do you have my traffic? He’s at my 10 o’clock passing, left to right,” And I wait one minute. Silence. And he says “Negative.” I said, “Well, traffic in sight. He’s at my nine o’clock, passing to my six.” And another voice came up, probably his supervisor. And he said, “triple five [the plane identification number], say you’ve had contact?” and I said “well, he’s now in my 10 o’clock position, level, appears to be closing, distance unknown.”

I didn’t have it. I flew an attack airplane. We didn’t have inflight radar, we had air-to-ground. He said, “Negative traffic,” but he kept asking me and I kept telling him. I’m still flying on my departure heading and this light, I didn’t know what it was, came around behind me and then in front of me.

Mind you, I couldn’t tell because I had no point of reference. This is at night, black night, the moon wasn’t up yet. That light could have been right outside of my instrument, right outside of my canopy, or it could have been 10 miles away. I didn’t know where it was, but it maintained, it looked like to me, kind of a constant distance, but it came around me. I was talking to center all the time and telling them, and it came around and it took a position on my wing. And I say on my wing, but I didn’t know how far away it was. And there it sat.

I kept on talking to center and was a little upset that he wasn’t painting this contact [seeing it on their radar], because it could hit me, you know, it was an airplane. And we kind of went along like that for a while. The area of lights was kind of diffuse. I couldn’t really tell what it was. We were just proceeding along there when by now I was in the 40s on course, and this guy was still there. It’s obviously formating on me [e.g. tracking as if in formation].

And I asked my back-seater, “Jim, are you seeing what I’m seeing?” He says “I sure as hell do!” Then I asked him the fatal question. I said, “Would you like me to check out the contact?” “Wait, one,” another voice came up. I know that this is like the triple supervisor. And he said “You’re clear to cruise.” “You have a contact in sight?” I said, “Roger, still no joy here.” He said, “You’re cleared to cruise.”

That’s something when you’re [flying on instrument readings] you seldom hear from the FAA. “Cruise” means that you can go anywhere, fly any speed, go any altitude, and they will follow you and they will keep anybody from hitting you. So that freed me to do what I had to do. When you are formating, especially when you don’t want to have extreme-length rates of closure at night because you don’t have the depth perception. I just dropped a wing for a second and so that maybe will change my direction about two degrees.

And we’re just sailing along like that. I was trying to keep a line of chatter up just to maintain that I had good communications. So as this thing started coming into focus, it didn’t have navigation lights. Normally you can tell from an airplane, they’re required to have like a red and green light defined. You can see the span of a wing, and usually military aircraft have dim lights in the fuselage so you have formation lights, but of course it didn’t have that. If it was an airliner you would have had window lights and you could get some perspective from that. I didn’t see anything within my realm of experience to help me identify what this was,

As I got closer, I said, “it appears the lights are moving in a clockwise direction, and there’s a dome light.” All of a sudden I started to get some perspective about the hard structure of this object. I never used the words “UFO.” In the Navy it’s a “bogey,” and they picked up and used that terminology with me. I never really went along with all the UFO stuff I heard about. You know, like “I was taken away by an alien who gave me a proctological examination.” I didn’t go along with any of that, but now this was happening. This was different. Now something that I didn’t understand was in my world and it was kind of uncomfortable.

I knew that this was a large object. And if the guy [in a plane] next to you puts on power or takes off power, you can hear it immediately because you’re close to that very high velocity stream of theirs. It turns out that the sound pressure level varies as the seventh power of the exhaust velocity, so you can imagine when somebody applies a lot of power and maybe goes into afterburner, your airplane actually shakes, and you can hear the roar of that engine through the space between you. I have gone dry just talking about this, really.

What I’m going to tell you now happened in about three seconds. I said, “It’s pulling ahead,” and then I stopped talking because it started accelerating and then climbing and then it went straight up. All those lights [dome lights and rotating lights around the craft] just disappeared in a point and then disappeared in the starfield and it was gone. And I said “it’s pulling away” and I stopped talking for a long time. And then the older guy’s voice came up and says “Five five, radio check. Are you still there?” And I said “Roger.” I said, “The bogey just pulled away and I have no contact with it.” The FAA never saw this object.

Then it was kind of very businesslike and nobody ever said [anything about] aliens. We were very professional. They knew things that I didn’t know. And that’s why I think there was a lot of interest on the ground.

Basically, I knew that I was looking at a very non-Newtonian object. When this object was formating on me, and I closed with it, that’s when it started that rapid departure. But I did notice that his motions were not like the way an aircraft would fly. First of all, when I said “non-Newtonian,” there were no wings suspending or holding this object up against the forces of gravity. And it also moved in very jerky motions, especially when it started accelerating away from me. Any structure that I was familiar with would have just torn itself to pieces pulling away like that.

[Captain Horn got home about 2 a.m.] I just couldn’t sleep thinking about this. I got up and went to the dining room table and started going through some paperwork. That was about three o’clock in the morning. At five o’clock in the morning, there was a thud on the front door and it was the Washington Post. I picked up the paper and went back to the table and opened it up. What do you think that headline said? “Many UFO Sightings Reported Over Indiana,” in 48-point type.

This article is based on a presentation made by Captain Horn in April 2018 at the University of Alaska Anchorage. It has been edited for length and clarity. Accompanying photos provided by Captain Horn.