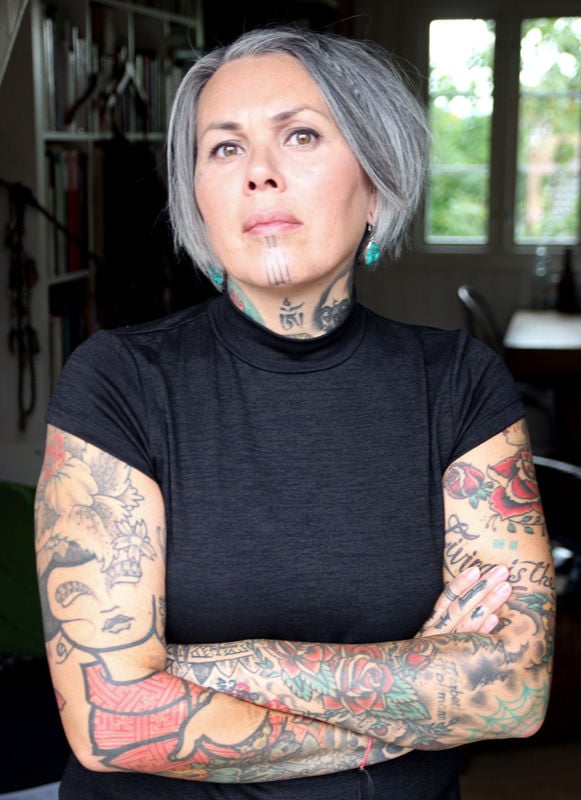 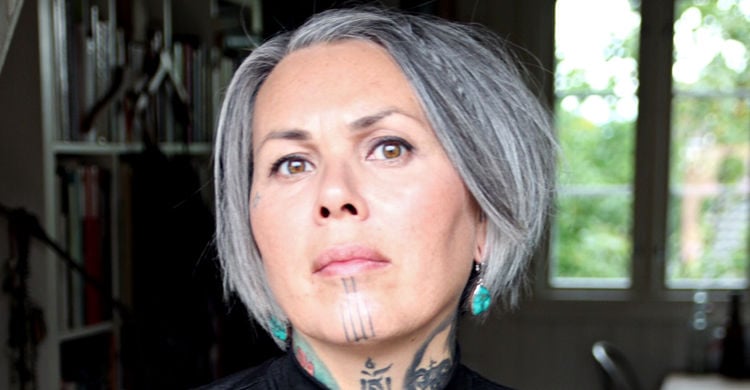 The needle is steel, not a sliver of bone. The thread is cotton, not reindeer or whale sinew. And rather than soot, lampblack, or gunpowder, the pigment is black ink. But though her materials are modern and sterilized, when Greenlandic tattoo artist Maya Sialuk Jacobsen hand sews a traditional design on the face of fellow Inuit women, she is helping them reclaim a vital part of their cultural history that dates back at least 5,000 years.

She is healing, while inflicting great pain. Hand-sewn tattoos are excruciating to receive, compared to those administered by a high-speed, electromagnetic machine. This extreme discomfort is part of the point. For several millennia, Inuit women wore full sets of chin lines and other facial tattoos as bold symbols of their physical toughness, firm spiritual grounding, and, in many places, readiness for marriage. The tattoos were aesthetic, but they also proclaimed a woman possessed both the natural strength and the learned skills to survive in the Arctic.

"The tattoos were like a business card, saying, 'I am amazing, I have been taught what I need to know by other amazing women, I am spiritually connected, and I can endure,'" said Jacobsen, who is visiting Anchorage this week to give a presentation at the Anchorage Museum and to demonstrate traditional Inuit skin-stitching at a local tattoo studio.

Artifacts unearthed by archeologists show that as the Inuit migrated from what is now the Russian Far East to Alaska, then eastward to northern Canada and Greenland, establishing communities across the circumpolar Arctic as they went, they carried with them a tradition of skin-stitching tattoos. This, along with other Inuit customs and practices, formed a solid bridge across a vast expanse of space and time, so that a 3,500-year-old mask found in Nunvaut, Canada bears very similar tattoo marks as a 15th century mummy in Qialakitsoq, Greenland, and, until a decade ago, the living skin of the last Siberian Yupik women on St. Lawrence Island to have traditional tattoos, received in the 1920s. (The last two of these women, Legraaghaq (Mabel Toolie) and Uyaatuwan (Sadie Sepila), died in 2005 at the ages of 95 and 96.)

"Inuit tattoos to me are like a red line of thread running throughout our culture," said Jacobsen. "They traveled so far, not just over land, but over history."

Then in the late 19th and early 20th centuries, Inuit lands were colonized, and Christian missionaries forbid tattooing, which, like a great many other things, the word of God singles out and prohibits in the Book of Leviticus. The widespread female rite of passage was declared taboo, and, under the crushing heel of cultural assimilation, traditional Inuit tattooing was all but stamped out.

But in the last decade, this dying ember has begun flickering. At the same time as the last few old Inuit women with traditional facial tattoos have passed on, a small but growing number of female Inuit artists and activists in Alaska, Canada, and Greenland have begun promoting a resurgence of the custom as a self-empowering symbol of cultural pride, a means of reclaiming history and curing the wounds of colonialism through a timeless ritual of blood, needle, dye and thread.

Among them is Anchorage-based Iñupiaq artist Holly Mitiquq Nordlum, who began researching traditional Inuit tattoos past and present about two years ago, and will co-present a discussion with Jacobsen on the revival of Inuit skin stitching on September 10 at the Anchorage Museum. (The two are also scheduled to present together on traditional Inuit tattooing at the Global Indigenous Tattoo Festival in New Zealand in November.)

"To me, these tattoos are about embracing Inuit culture and identity rather than being embarrassed or ashamed of it, which I think too many Native women are, in Alaska and other places," said Nordlum. "Traditionally, these tattoos were the visual sign of a Native woman's strength and self-confidence, and the revival of this tattooing is about transporting that tradition to modern times, where the tattoo may not necessarily specifically mean what it once did, like possessing certain skills like skinning a seal. Instead it can mean, 'I have learned how to be a strong, confident Native woman who can thrive in a harsh world, and I'm not hiding it. I'm proud of who I am, and I'm showing it off.'"

Nordlum has photos showing her great-grandmother had traditional skin-stitched tattoos. Nordlum is about to get her first. On Saturday, September 12, Jacobsen will hold a public demonstration of Inuit skin-stitching by using the old techniques to tattoo Nordlum's right arm with three bird's feet, a reference to her Iñupiaq name, which means, "place where ducks land."

Jacobsen and Nordlum have plans for the Greenlandic tattoo artist to return to Alaska next year and in 2017 to complete a documentary film on the revival of Inuit tattooing in Alaska and to train Alaska Native artists in the practice of skin-stitching. Nordlum plans to get at least two more hand-sewn tattoos, including chin stripes.

"I'm scared," she said. "Not so much of the pain as of what they [the tattoos] will generate from people I know, people I meet, Natives and non-Natives. So I'm scared, but I'm ready."

Nordlum's journey in some respects parallels that of Canadian filmmaker Alethea Arnaquq-Baril, who received traditional Inuit facial tattoos in the process of creating her 2010 documentary Tunniit: Retracing the Lines of Inuit Tattoos, which is to date the best-known popular media work on the Inuit tattoo revival. Baril began working on the film in 2008, traveling to nine Inuit communities in the Baffin and Nestilik regions of Canada, and conducting on-camera interviews with more than 50 Inuit elders about tattoo meanings and techniques, as well as why and when the custom died out. During the filming, the last Nunavut Inuk woman who received traditional, skin-stitched tattoos passed away just before Baril was scheduled to interview her. The film chronicles Baril's findings as well as her intense personal decision to receive traditional tattoos on her forehead, cheeks and wrists.

After the film was released, Baril, who lives in Iqaluit, the capital of the Nunvaut Territory in far northern Canada, encountered some hostility within her Inuit community, based not only on her own tattoos, but also her vocal support for other Inuit women breaking a taboo laid down a century ago by Christian doctrinaires.

"Today, evangelical Christianity remains a shockingly strong force in Arctic Inuit communities, causing tensions around discussing anything that remotely touches on the old spiritual beliefs," Baril said. "The Inuit that attended residential [boarding] schools, the generation that had their culture beaten out of them, and had their mouths washed out with soap when they spoke their native language, these people are hurting and confused. In some cases the mere mention of traditional tattoos is enough to send a person into a spitting rage."

When Jacobsen, 45, decided to receive traditional Inuit chin stripes earlier this year, she encountered stiff resistance from her father, who is of Danish descent. (Jacobsen's mother is Inuit, or Inuk. Denmark colonized Greenland in the 18th century.) "He was against it, for sure, and he let me know," she said. "He was worried about how I would be viewed by society. Growing up, I was told, the more Danish I look, sound, and think, the better off I'll be, and here I was now, a full-grown woman, choosing to embrace the other part of my culture, and he was not okay with it, no. There is a lot of deep meaning and emotions on all sides with these tattoos."

Jacobsen grew up on Disko Island, or Qeqertarsuaq, a large island in Baffin Bay, in northwest Greenland. Older women taught her how to sew on sealskin until she was 12, when she was sent to Denmark to boarding school, and lost the skill. "This was a world where, if I spilled food on myself or dropped it on the floor, I would be told, 'Don't eat like a kalak [Greenlandic Inuit]," she said.

When she was 30, Jacobsen became a professional tattoo artist. She now owns two studios in Oslo, Norway. About four years ago she was diagnosed with Fybromyalagia, which made it difficult to use a tattoo gun. She converted to "hand poking," a painstaking method of making tattoos by drilling patterns of holes in the skin, one-by-one, and filling them with ink.

Hand poking reignited a long-held interest in traditional Inuit skin stitching. The formal research on Inuit tattooing is scant, but Jacobsen began examining explorers accounts and drawings in museum archives in Norway, Denmark and Greenland, and soon tapped into the loose-knit, multinational collective of Inuit tattoo revitalization proponents that took shape in the last decade. That in turn led her to begin experimenting with hand-sewn tattoos, on herself. "It had been a long time since I had sewn with a needle and thread, and I wasn't going to tattoo anyone else until I felt I had the control I needed."

Two years ago, Jacobsen began tattooing Inuit women with traditional designs, using traditional skin stitching methods. She has since lost count of how many Inuit tattoos she has done. "They're all Greenlandic women. One leads to another leads to another."

Skin stitching, she points out, is the quietest form of tattooing in the world. "That's beautiful in itself," Jacobsen said. "It's the quietest, and also the weirdest, and most difficult, because with any other form of tattooing, the ink goes in from above. With skin stitching, the ink surfaces from beneath, so as the artist you have less immediate control. You have to just know what a certain stitch will do, and then do it."

Nordlum said about a dozen Alaska Native women have contacted her in recent weeks, hoping to book a tattoo session with Jacobsen while she's here. (Jacobsen applied for and received a license to practice tattooing in Alaska earlier this year in advance of her time in Anchorage.)

"Like a lot of Native women in Alaska, I grew up hearing about the tattoos, knowing they had existed, but never seeing them, and now, it's exciting to see this surge of interest in bringing them back," said Nordlum.

Asked how she would respond if a white man shows up at her studio wanting a skin-stitched Inuit design on his face, Jacobsen seemed to acknowledge the seeming inevitability.

"I will say no," she said. "I will say that I will gladly give you a modern interpretation of Inuit tattoos on your arms or legs or wherever, but a traditional facial tattoo? No. These tattoos are not for your chin. Some things need to be left sacred."

Greenlandic tattoo artist Maya Sialuk Jacobsen and Anchorage-based Iñupiaq artist Holly Nordlum are holding two events in Anchorage. "Reviving the Tradition of Skin-Stitched Tattoos," a presentation at the Anchorage Museum, will take place Thurs., Sep. 10 at 7 p.m. at the museum. Then on Sat., Sep. 12, from to 2 to 4 p.m. Jacobsen and Nordlum will give a live demonstration of traditional Inuit skin-stitch tattooing at Above the Rest Tattoo, 916 Ingra St.