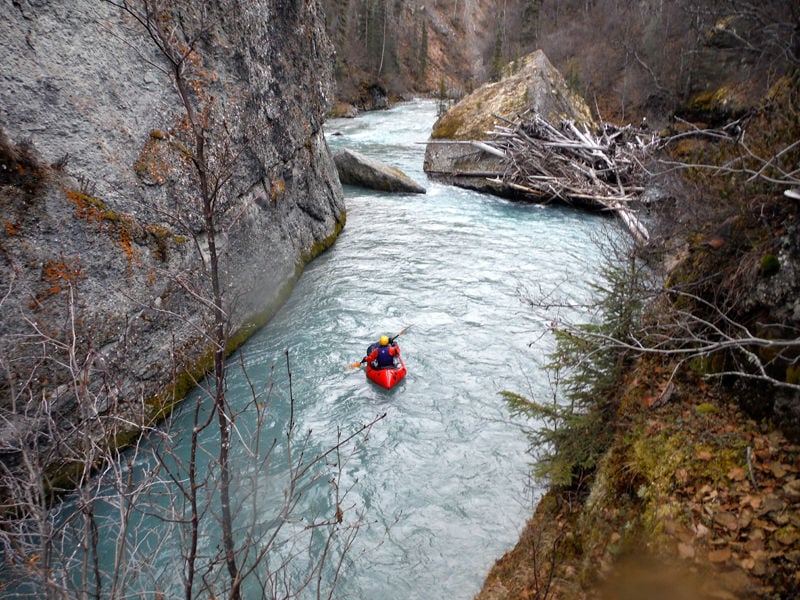 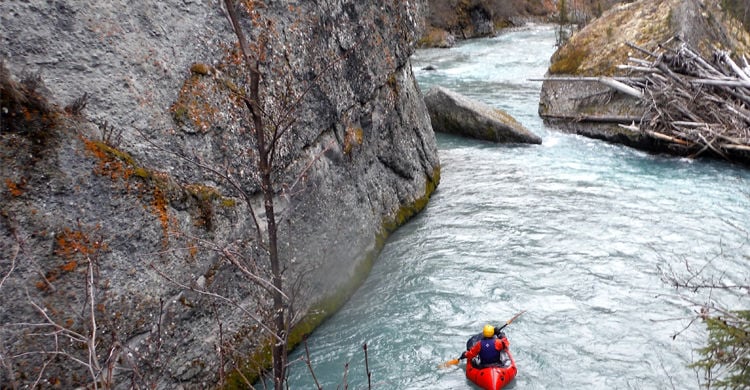 Summer's heat brings high water to the Chickaloon River as its eponymous source glacier unleashes thousands of gallons of milky grey water. In autumn, glacial melt subsides and the Chickaloon becomes an enchanting, translucent turquoise. Lower water also makes the river easier and more accessible for human-powered travellers, so fall is the best time to visit for most paddlers.

Historically, the Chickaloon was either difficult or quite expensive to access. River pioneer Chuck Spaulding, who owns the NOVA raft outfitter, used to haul in boats on horseback. Rafters and kayakers flew in to the gravel strip about thirty miles upstream from the Matanuska.

You can still fly in to the Chickaloon with Last Frontier Air Service (helicopter) or Mike Meekins (wheel plane). But paying for the fly-in and waiting for flying weather is no longer necessary: The Chickaloon is quite accessible for packrafters, particularly in the autumn. While summertime high water creates turbulent, pushy whitewater, autumn's low water is perfect for packrafts, and the wider gravel bars make upstream travel easier.

There are multiple routes into the Chickaloon. Local explorer Brad Meiklejohn details a scenic route (see packrafting.org for details) that starts in the Kings River drainage and crosses into the Chickaloon at Moss Creek. Alternatively, it is possible to walk all the way up Caribou Creek and cross over the ridge at Glass Creek, a route some of NOVA's clients still walk before meeting up with rafts that have been air dropped. Finally, you can simply walk up the river valley on an extensive network of ATV, foot, and game trails. Time availability, weather, and snow conditions can dictate your route choice: When there's snow in the high country, it's probably expedient to walk up the valley. Prior to snow, the routes from Kings River or Caribou Creek have expansive views in the alpine, though the Caribou Creek Route is likely to take longer.

The valley route is simplest. Turn left off the Glenn Highway just before the Chickaloon River bridge, approximately an hour-and-a-half from Anchorage. After a couple of miles, the pavement ends near a significant ledge rapid and a cabin. This ledge is the largest rapid of the lower river, and a good place to gauge water level. If the water is flowing through a gap in the rock and creates a tongue, and the rocks on river right are above water, the river will be Class II to III, and the ledge rapid is innocuous. However, if the ledge rapid is a boiling, recirculating hole, then the rapids upstream will be much pushier and the ledge poses a significant risk of trapping unlucky paddlers. In general, the color and volume of the water will coincide: Clear to turquoise water usually means low volume, and opaque grey or brown colors mean the water is high.

After scouting this lower rapid, take a slight right past the cabin onto a potholed dirt road. This road eventually turns into an ATV trail and then a footpath, passing by the properties of unusually irritable landowners en route toward the Chickaloon's headwaters.

Under Alaska law, rivers and their gravel bars (areas below the high water line) are public property, and paddlers have every right to be there. However, some residents of the Chickaloon River area have a problem with other people, and may harass paddlers. Just be aware you have the right to be on public roads (such as the route upstream), on the river itself, on the river's gravel bars, and on public lands a relatively short distance upstream of where the pavement ends.

Since the road gradually tapers into an ATV trail, it can be tempting to keep driving. However, the rutted, potholed road is hardly faster to drive than walk, so you might as well park at the pull out a couple of hundred yards past the cabin. Alternatively, you can park in the public right of way farther downstream, such as by the old covered bridge adjacent to the road. After finding a place to leave the car, follow the road/ATV trail upstream. It forks in a couple places where private driveways clearly are marked with "No Trespassing" signs: Simply continue on the main (public) road, ignoring "No Trespassing" signs that have no authority to deter passage on it. After a few miles, the trail forks, with one trail heading downstream and the other turning abruptly uphill. Either route is passable. The downstream route leads to a river-level route with cobble bar hopping before the trail reenters the woods. Or the uphill ATV track leads to an old cabin and the end of the double track. From the cabin, continue upstream following large game trails at approximately the same elevation. These continue for a half mile or so before descending and meeting the ATV trail.

After crossing a tributary that descends from Castle Mountain, the ATV trail climbs several hundred feet away from the river, and feels like it might be going the wrong way. It isn't: The trail is avoiding a two-mile canyon along the river, and takes a path of less resistance up on a high bench with delightful tundra and forested glades. From this high bench, the bands of rock and spires of Castle Mountain are visible to your left. After about a mile-and-a-half of walking on this bench, a very well-established foot and pack trail descends to the right while the ATV trail goes left. The correct route upriver is on the foot trail, while the ATV trail peters out a few hundred yards later. From this point on, the route up-river follows a highly popular game trail that enjoys intermittent human maintenance. The USGS topographic map locates the route of the actual trail with impressive precision.

After leaving the ATV trail, this foot path descends to the river, crosses Doone Creek, and then ascends and descends steeply again. After the second trail descent, the trail is very close to an unusual rock formation that, as far as I know, is unparalleled in our region. The point is near a location known as "Ninety-Eight Bridge" on the USGS topographic map. Here, the Chickaloon River passes through a deep, undercut gorge whose opposing rock walls lean over the water and come within about ten feet of touching one another. They are so close to each other that a fallen tree straddles the void. Huge rocks and a cluster of logs clog the right side of the river downstream. This remarkable canyon is worth a visit regardless of one's interest in paddling, and has plenty of good camping nearby. It is close enough to the road to make a logical day trip put in-these eight or so miles take about six hours total to walk in and float out, if you are moving at a leisurely but steady pace.

Paddlers planning on an overnight can keep heading upstream to earn views, because the valley changes radically in the next few miles. Fortunately, the trail continues to make for easy walking, mostly through the woods with occasional stints on small sloughs or riverside gravel bars. Not far past the gorge, a massive rock tower comes more clearly into view. This sheer face with twin buttresses is marked as Point 5504 on the map. There is a wide gravel bar padded with Alaska cotton where Fourteen Mile creek flows into the Chickaloon. The nearby rock tower looms over the gravel bar and provides a setting worthy of aspiring Romantic painters, and a nice camp site. Most of the rapids are downstream and 14 miles upriver is a reasonable day's walk for a weekend paddle trip in the fall.

It doesn't take nearly as long to paddle out. The current moves quickly, first through Class I and II gravel bars as the creek gradually compresses. After a few miles, the Chickaloon goes through its first significant rapid, a hundred yard long or so boulder garden (Class III at low water, probably Class III+ or IV at higher summer flows). Entertaining paddling continues from the boulder garden down to the overhanging gorge at Eight Mile. Scout this canyon before running it, as wood can obstruct the entire outlet of the gorge, where two large rocks catch many river-borne trees during flood. The small informal trail up to the gorge's rim also provides birds eye views of paddlers passing through the amphitheater below.

The river continues through a less vertical canyon below the gorge, with more rapids that are mostly Class II. Boulder Creek is the final major tributary to enter the Chickaloon, and enters from the left where the Chickaloon flows around a massive boulder. It is only four miles or so from Boulder down to the road. Paddlers who hiked in from Kings River may wish to float down the Matanuska back to their car.

The Chickaloon River is a magical place in the fall. In September, blazing yellows and oranges light up the river valley and dance on the turquoise water. In October, snows often blanket the mountainsides even while the valley provides easy walking for paddlers. If you want to explore one of the Talkeetnas' great rivers, take a fall trip to the Chickaloon.