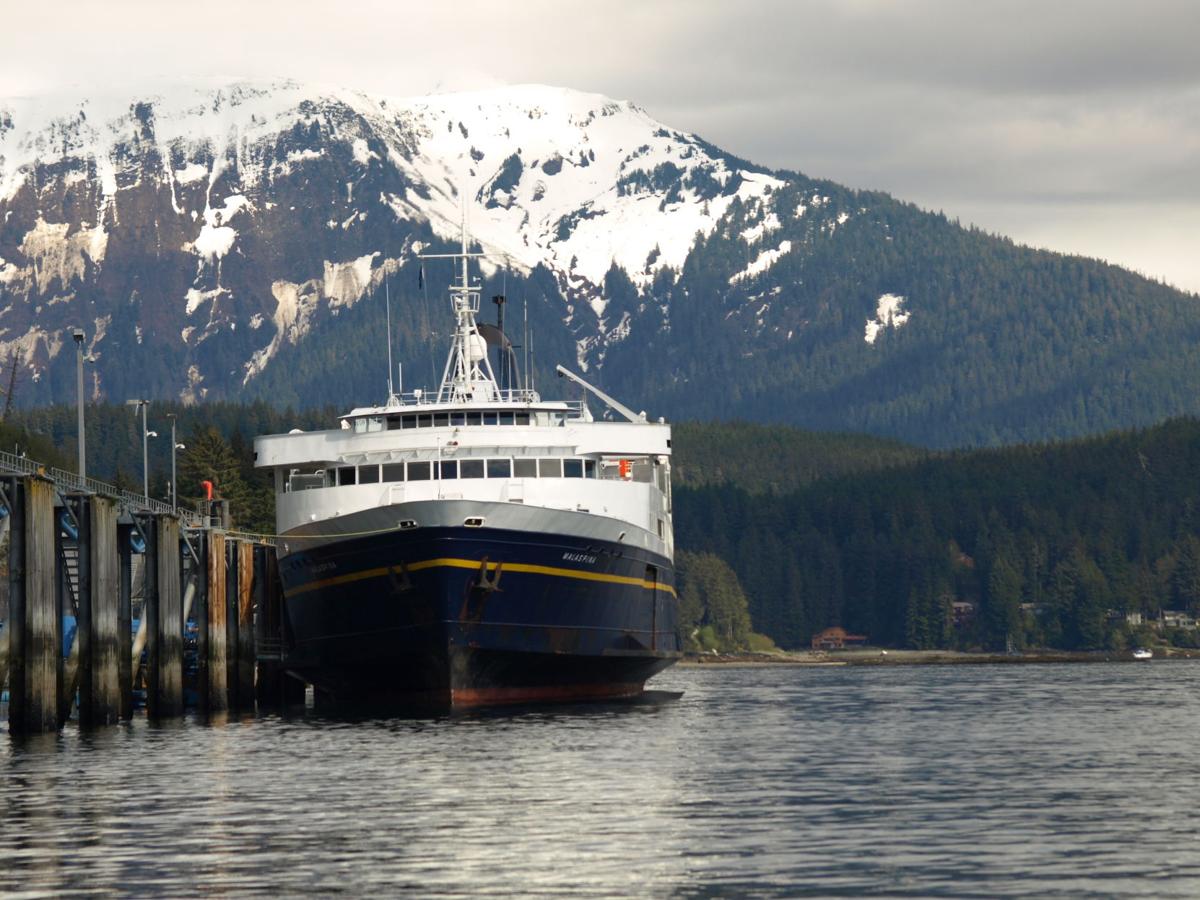 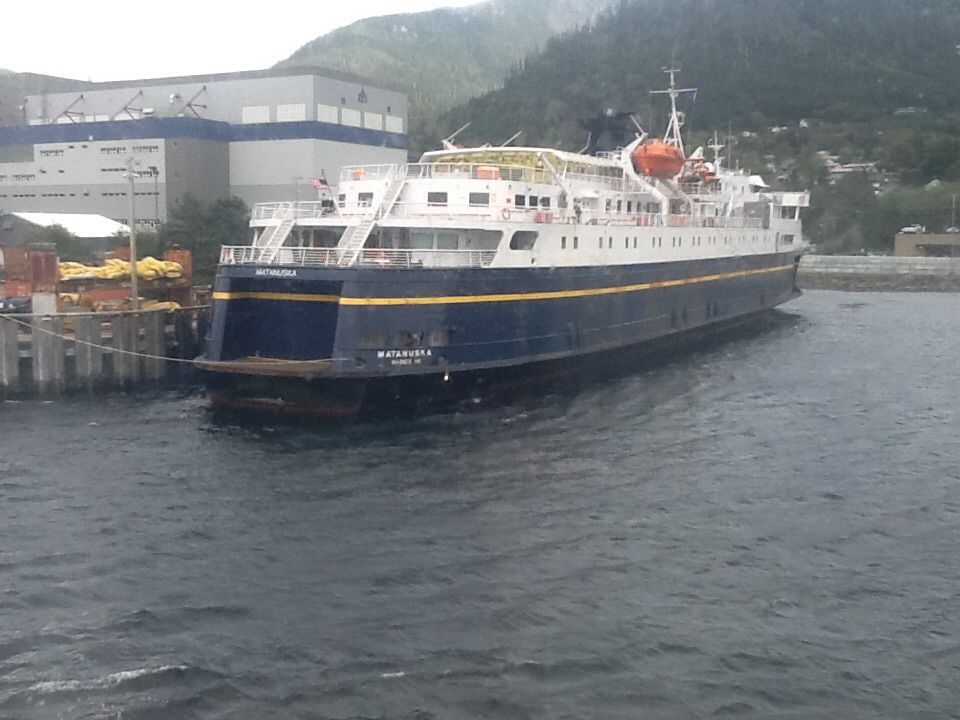 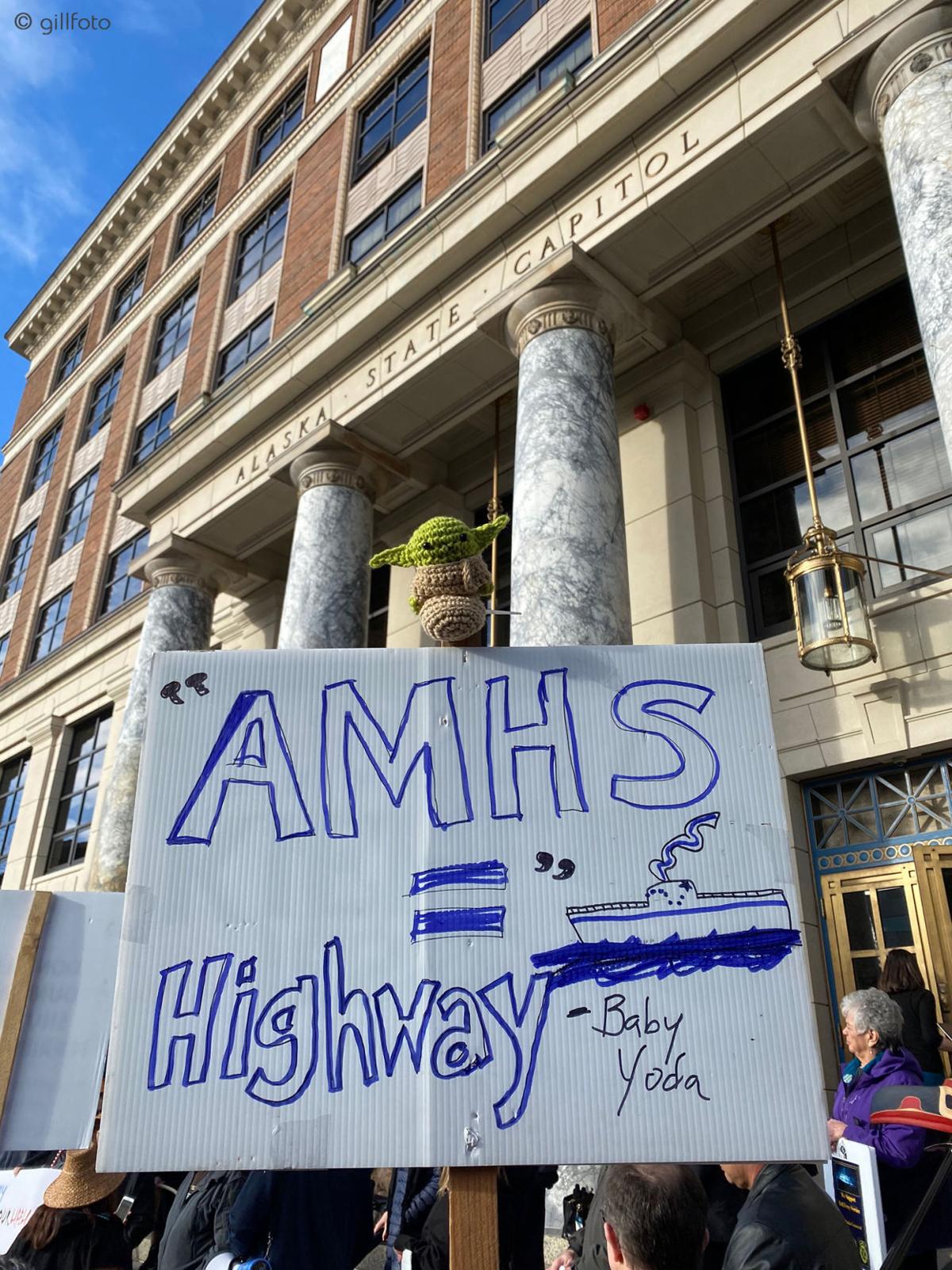 Our Highway Our Lifeline; at the steps of the Alaska State Capitol Building, Juneau, Alaska. (Wikimedia Commons • Gillfoto)

Editor’s Note: Jan Sande is a former employee of the Alaska Marine Highway System, working more than 30 years as a deck officer, retiring as a captain and pilot. He currently lives in Craig, Alaska.

In 1972 the Malaspina was stretched by 56 feet, creating a tremendous stability issue. This was a design problem and neither the Alaska Marine Highway System (AMHS) Central office director nor the Naval architect knew how to correct it. Finally the issue was solved by the traffic manager with AMHS assisted by the master, chief engineer and the U.S. Coast Guard marine inspection office. Following certain guidelines that ship could carry her previous loads prior to lengthening.

The next issue came up when the ships were converted from heavy bunker fuel to diesel. This was a couple of years later with the lesser density of diesel the Malispina would be unstable under certain normal conditions. I alerted the port captain with stability information and the issue was solved prior to sailing from winter overhaul.

The next major disaster came with the design of the Columbia, which came online in 1974. The proposed purpose of the ship was to connect Washington State and Southeast/Southcentral Alaska. Due to economic constraints during the Nixon Administration — the shrinking dollar and cost overruns — plagued this project. Since the Columbia was designed for inland use, which is less expensive than ocean-going, this ship had mechanical (vibration) and electrical breakdown issues, caused mostly by poor design and, frankly, cutting corners.

Financial mismanagement in the central office, as well as the naval architect in Seattle, contributed equally to the problem. Although many of these issues have been corrected, it was not done in a cost-effective manner.

Refurbish of the Taku, which was done in Tacoma, followed by a stability test, also done in Tacoma, where the ship was sitting in the mud. The test was not productive, so it was re-done in Seattle, at Pier 46. That test was productive. I include this as an example of the central office’s mismanagement of maintenance funding.

Re-engine of the Matanuska and Taku

Horsepower was reduced because Marine engineering and design applied the wrong calculation — brake horsepower vs. shaft output horsepower. This created difficulty in close quarters docking in our normal, Southeast Alaska stormy weather. The Taku ended up with a stability issue as well. Both ships ended up with a terrible vibration issue. There was nothing wrong with the original engines. The Malaspina has original engines but now parts are an issue after nearly 60 years.

The MV Aurora and LeConte elevators

The Marine engineer and design team continually failed to develop a workable passenger elevator proposal. Finally the port captain asked for ideas. I recognized this was a problem area and designed one prior to the request for proposals and sent it in. It was accepted, though my foresight was never officially acknowledged — another example of central office management not valuing the legacy right under their noses.

During the Exxon Valdez oil spill in 1990, the Aurora was in Prince William Sound and I was there as captain. We were informed to return to Valdez immediately and then head for Southeast as the contract with Exxon had been cut one month short. I inquired of a governor’s staff person as to the logic of this. He said that we did not want to linger and dig further into Exxon’s finances. I asked him about the future of AMHS and he went on to say AMHS would soon be history. I asked this was to be accomplished. He replied, raise prices tremendously, change schedules dramatically, gather data that shows people are not riding, then share said data with the public. The state could then shut down the system, he said, allowing private enterprise to come in and take the summer profits and drastically reduce service in the winter, almost to the point of shutting down. Carnival Cruises and Holland America had begun lobbying work on this as early as 1970.

The Aurora was in shipyard status. The result is the LeConte has the panhandle run, from Metlakatla to Skagway, out to Sitka and all places in between. The LeConte was six hours late due to fog, weather and tides. Hollis on Prince of Wales Island did not have electricity. Electricity was provided by the ship. The terminal agent and the shippers were not informed of this. As a result, the vans of unrefrigerated Herring eggs that had been brought from Craig to Hollis, expecting the ship to arrive as scheduled, spoiled. The central office received complaints from people wondering why there were not informed the ship wasn’t there. The answer from the central office was to the effect of ‘we don’t want your business anyway.’

A similar event occurred earlier when the southern terminus was moved from Seattle to Bellingham. This was a political issue tied to the Port of Seattle and the result was no van traffic and those vans, mostly carrying perishable food, all had to be sent by barge.

In 2000, the catamarans M.V. Fairweather and Chenega were built, against the consensus of opinion of just about everyone in the maritime industry. That consensus was that neither project would work because they were so costly to operate and required nightly maintenance would be onerous. The biggest opposition voice came from the British Columbia ferry. The proposed propulsion system was a turbine. The state substituted/installed in-line diesels, three engines a side. Synchronization of six engines was difficult at best with the added costs of engine replacements just another example of the central office’s mismanagement.

Approximately 14 years ago, then-Alaska Governor Frank Murkowski forced the state Marine Highway System to move from Juneau to Ketchikan. As a result the state lost many of its more highly respected, well seasoned shore-side support staff.

Why in the world did he do that?

AMHS system engineering management slowly stripped port engineers and chief engineers of their authority and decision-making to maintain the ships. Much of the overall decision making was usurped by engineering management and given to vessel construction managers, many of whom had never sailed nor possessed USGS licenses. Preventative maintenance programs were cut, and/or not supported.

Although it was never stated, engineering management’s new philosophy was, in essence, to save money by being reactive instead of being proactive. Let a mechanical problem just develop so you’ll know what to fix and won’t have to spend any preventative money on diagnostics.

The following practices were then implemented:

1) Forego scheduling any large manufacturer-recommended maintenance on machinery unless it is required by USCG and/or American Bureau of Shipping, e.g. the Tustumina Fin Stabilizer System. The attitude was, and still is, ‘if it isn’t broken, then leave it alone and let’s save the money.’ The system was, however, wearing out. Had recommended inspections been performed, the manufacture could have procured all the parts and spares, minimizing the problem the ship is facing now. (The fin system is currently only half operational due to a whale strike.)

2) Take all major overhaul work away from the ship’s crew in favor of shipyard technical/manufacturer’s representatives.

The Taku’s certificate of inspection was allowed to expire. This means that since the Safety of Sea Life Convention meets every 10 years to upgrade sea worthiness requirements for Western nations that are signatories, these grandfathered-in certificates were allowed to lapse. This was poor financial planning that led to the Taku being sold for scrap with approximately $1 million of lead ingots in her bottom for ballast.

The Malaspina is in long-term layup. Mainly she needs a card deck steel replaced and 60-year-old engines need substantial maintenance. Parts may be difficult to acquire.

The Aurora and LeConte need some bottom replacement and the Aurora needs some engine and drivetrain work.

The Tazalina and Hubbard are the most recent costly mistakes, as they do not fit in the present dock except Auke Bay, which means stern loading only. To improve that would require tremendous changes and cost.

Another example of this dysfunction is the propulsion machinery and energy rebuild of machinery overhauls. The philosophy here was to reduce crew and overtime costs by securing a warranty from the the contractor performing the work. However, the crew always need to be involved as the contractors had no ship familiarity or allegiance to the Alaska Marine Highway System, so it costs most money in the long run.

Obviously politics plays an enormous role in the operation of the system, but the Alaska Marine Highway System Management has exacerbated the issues with their policy decisions and controls.