Health insurance coverage in the United States is delivered through a patchwork of employer-sponsored coverage, government-run programs such as Medicaid, Medicare, Tricare, VA Health Care, and privately purchased plans. While state and federal governments offer some Americans financial assistance to purchase health insurance, the United States remains unique as one of the only high-income countries where a high proportion of residents lack health insurance coverage. 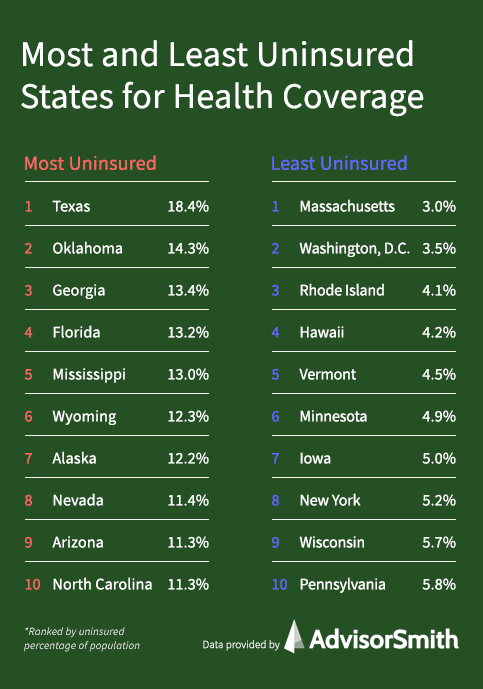 Nationwide, 9.2% of all Americans were uninsured, which is approximately 29.6 million people. The range of the uninsured population ranged from as low as 3% in Massachusetts to as high as 18.4% uninsured in the state of Texas.

States with the Most Uninsured

States with the Least Uninsured

The following table shows the 15 states with the least percentage of their population who are uninsured. In these states, over 93% of the population is covered by health insurance. Leading the way for the least uninsured residents is the state of Massachusetts, where only 3% of the population lacks health insurance. A major driver of the low rate of uninsured in the state was the passage of health care reform legislation in the state in 2006, which is commonly known as Romneycare.

Percentage of Residents Uninsured in Each State

Read the full study at https://advisorsmith.com/data/the-most-and-least-uninsured-states-for-health-coverage.