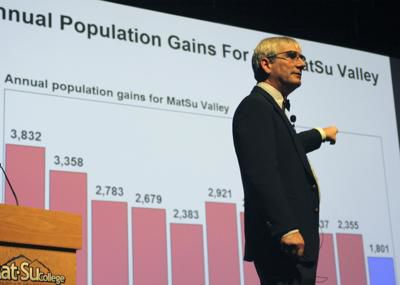 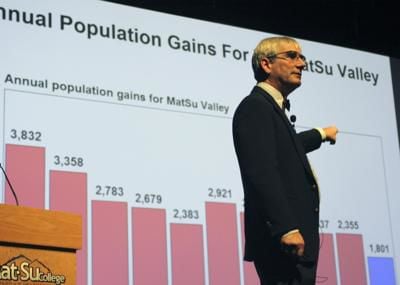 The state’s economy is still on an economic rebound from three years of recession, but barely.

The rate of employment growth is slow – 0.1 percent in August compared with 0.5 percent in July and June – and it wouldn’t take much for the downturn to be resumed.

Percentages compare the months with the same period a year before so as to reduce the effects of seasonal variations.

Some industries are showing growth, like petroleum and construction, and some still contracting, like professional and business services. “The numbers either way are very small,” said Neal Fried, a state labor economist.

That’s another way of saying that Alaska’s gradual economic recovery is fragile and even a small bump or two could derail things.

Retail is down too, Fried said, but that’s as much influenced by national trends like growing e-commerce eating into sales at brick-and-mortar stores than the regional economy.

There’s still ample disposable income in the state, which helps industries like retail and leisure and hospitality, which includes restaurants and bars.

Petroleum work has picked up following new discoveries of oil on the North Slope and increased winter exploration drilling as companies moved to delineate the finds and search for more oil.

Exploration-related drilling is mainly a winter activity, but activity remained strong through the summer of 2019 due to major maintenance projects on oil field process plants and pipelines on the slope, work typically done in summer.

The recent strength of construction is linked closely to projects on military installations, mainly in Alaska’s interior.

Employment growth in health care, another closely watched industry, appears to be slowing after several years of robust growth. Jobs in health acre were up 0.5 percent a month in June and July but growth slipped to 0.3 percent in August.

Fried said a closer examination of health care job data showed that hospital jobs and employment in clinics were stable or even slightly but that residential-type care, a category that includes nursing homes, was down.

The reasons for this are unclear but it may be connected to uncertainties over the future of Alaska’s Medicaid program, which helps lower-income and disabled Alaskans.

Federal employment was up 400 in August but that was due to the Bureau of Land Management’s fire response and a ramp-up in census hiring. State and local government both lost jobs, with reductions of 200 at the state level and 100 in local governments.

The good news is that the predicted loss of jobs and business confidence over state budget uncertainty this spring hasn’t appeared yet, probably because the magnitude of budget cuts threatened earlier by Gov. Mike Dunleavy were moderated by the Legislature and agreed to, in the end, by the governor.

Dunleavy is expected to continue his press for spending reductions but it is hoped that he will now seek to spread these over several years, which would lessen their economic impact, rather than to achieve them all in one year, the governor’s original goal.

Alaska endured three years of recession beginning in 2016 after oil prices collapsed in late 2015, dropping from over $100 per barrel to the $30-per-barrel range in a short period.

The effect on state revenues was dramatic, although the state drew on its savings accounts on soften the blow. On taking office last December Dunleavy cut spending to stem the red ink and shore up reserves, but he was only partly successful.