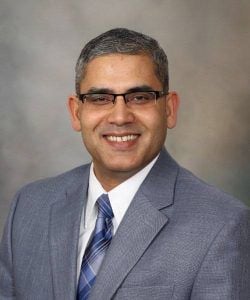 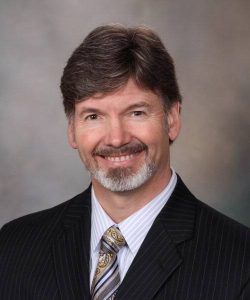 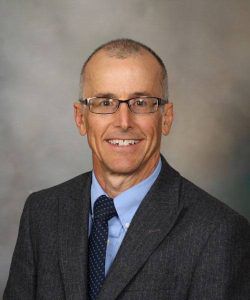 With a background in organic chemistry, Mukesh Pandey, Ph.D., initially planned to work in the pharmaceutical industry developing medications. But after completing a post-doctoral research fellowship in radiology at Harvard Medical School, he chose to focus his skills on improving imaging technologies to better detect the first signs of disease. Now he is part of a Mayo Clinic team that has developed a new radioactive tracer used with molecular imaging to identify the early biochemical changes linked to prostate cancer. With support from the Mayo Clinic Center for Individualized Medicine, Dr. Pandey and his colleagues are testing the radioactive tracer in the clinic, with the goal of detecting and treating the disease sooner.

“Prostate cancer is one of the most common types of cancer in men. If detected early when it is confined to the prostate, treatment can be more successful. We hope this new technology will improve patient care by providing a clearer understanding of the biochemical status of the disease, allowing for more individualized treatment,” says Dr. Pandey.

A radio chemical element known as Gallium-68 (Ga-68) is used to create a radioactive tracer to detect prostate cancer. The drug illuminates biological changes linked to the disease on a molecular imaging test. However, a worldwide shortage of Ga-68 prompted Dr. Pandey and his team to search for alternative ways to produce the radioactive tracer.

“These radioactive tracers are critical to helping us screen for prostate cancer with molecular imaging tests, such as a positron emission tomography (PET) scan. These tests allow physicians to search for disease on the cellular level. While x-rays, CT scans and MRIs provide an anatomical picture of the body, molecular images take a deeper dive into the biological and chemical processes taking place,” he says.

“While many types of prostate cancer grow slowly and require minimal or no treatment, some forms are more aggressive and can spread throughout the body. That’s why it is critical to detect the disease in its earliest stages when it is most treatable,” adds Dr. Pandey

Dr. Pandey, Timothy DeGrado, Ph.D., from the Department of Radiology and their team were the first group to successfully publish a study on producing the Ga-68 tracer using a machine known as a cyclotron. This approach enables the production of more Ga-68 than other methods.

Together with a team of international experts, Dr. Pandey and his colleagues published another study in the International Atomic Energy Agency journal, opening the gateway for laboratories worldwide to use this new method to produce the radioactive tracer.

“There’s been great interest in this new technology. Our publication is one of the most downloaded documents from the journal’s website. We’re excited that this work has the potential to impact care for men with prostate cancer worldwide,” says Dr. Pandey.

Moving discoveries from the lab to the clinic

With support from the Center for Individualized Medicine Biomarker Discovery Program, the first cyclotron produced Ga-68 drug was introduced into Mayo Clinic earlier this year and a clinical trial evaluating the new approach is already underway.

“While many institutions are working with this new technology, we are among the first to test this cyclotron produced Ga-68 labeled tracer in the clinical setting,” explains Dr. Pandey.

The new radioactive tracer is not limited to screening for prostate cancer.

“Going forward, we will also use the cyclotron produced Ga-68 to screen for neuroendocrine cancer and other cancers with similar biological characteristics,” he says.

“After my training, I shifted my career focus to work more closely with the medical field so my work could have a greater impact on patients. While I had a strong background as a chemist, it was with the help of many mentors, including Dr. DeGrado and Val Lowe, M.D., that I learned about the broad capabilities of molecular imaging,” says Dr. Pandey.

While Dr. Pandey and his colleagues began work on developing their new method to generate a Ga-68 radiotracer in 2010, it took time to identify the correct production process.

“Medical discoveries are often made by diving deeper into the biochemical mechanisms that trigger disease. Over the years, my mentors have encouraged me to try new paths as we searched for answers,” says Dr. Pandey. “With the freedom to explore and collaborate, we were able to create a new method of producing Ga-68 labeled tracers that we hope will help physicians to diagnose prostate cancer sooner, improving outcomes for our patients.”