All but eight states are now in the red zone for COVID-19 cases, the White House coronavirus task force said in new reports issued Tuesday.

The Dakotas and Wisconsin again this week led the nation in cases per capita, with Iowa claiming the fourth slot.

The reports, which are not made public by the Trump administration, are sent to governors weekly. The Center for Public Integrity is collecting and publishing them. President Donald Trump’s administration will be in charge of leading the federal response to the pandemic until Inauguration Day, through what many experts are already predicting will be a gruesome winter.

The new reports from the task force, led by Vice President Mike Pence and Dr. Deborah Birx, underlined that the coronavirus pandemic is not getting better, despite Trump’s insistence that the country is “rounding the turn.”

“There is continued, accelerating community spread across the top half of the country, where temperatures have cooled and Americans have moved indoors,” the task force wrote. “Also shown is continued, significant deterioration in the Sunbelt as mitigation efforts were decreased over the past 6 weeks, leading to the most diffuse spread experienced to date.”

The task force also issued its strongest endorsement yet of widespread, regular testing for the general population, even when individuals show no symptoms.

“All red and orange counties must begin proactive testing of 18-40 year-old community members,” the White House told New Mexico. “Requiring use only in symptomatic individuals is preventing adequate testing and control of the pandemic.”

The task force reports contain little data about hospital capacity, but at least two of them this week contained notes of alarm. “Minnesota is seeing a continued dramatic rise in cases and test positivity that will continue to lead to increasing hospitalizations and deaths,” the task force wrote in one report. “New hospital admissions in New Mexico continue to rise and capacity is under continual threat,” it wrote in another. 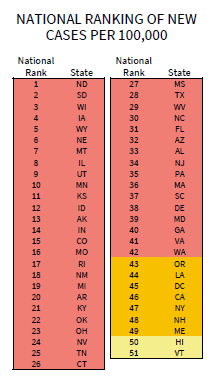 The Nov. 8 reports from the White House Coronavirus Task Force included a ranking of states based on their rates of new cases per population. (Screenshot of report)

Twenty states are now in the White House’s red zone for percentage of positive tests, meaning more than 10 percent of tests are coming back positive, and 27 are in the red zone for deaths, meaning they had more than two deaths per 100,000 residents in the past week.

Aside from its weekly reports, the White House task force has been mostly “dormant” and riven by personnel clashes, the Washington Post reported last month. Trump directly contradicted advice contained in the task force reports several times this fall by holding large campaign rallies in states with uncontained outbreaks. The transition team for President-elect Joe Biden has promised a national dashboard that would allow Americans to see data on the spread of the coronavirus by zip code.

The White House did not respond to a request for comment but has said in the past that it does not make the reports public because it wants states to lead the pandemic response.

The states in the red zone for cases in this week’s report (meaning they had more than 100 new cases per 100,000 residents in the week prior):

The states in the red zone for test positivity in this week’s report (meaning more than 10 percent of tests in the state were positive in the week prior):

The states in the red zone for deaths (meaning they had more than more than two new deaths per 100,000 residents in the week prior):