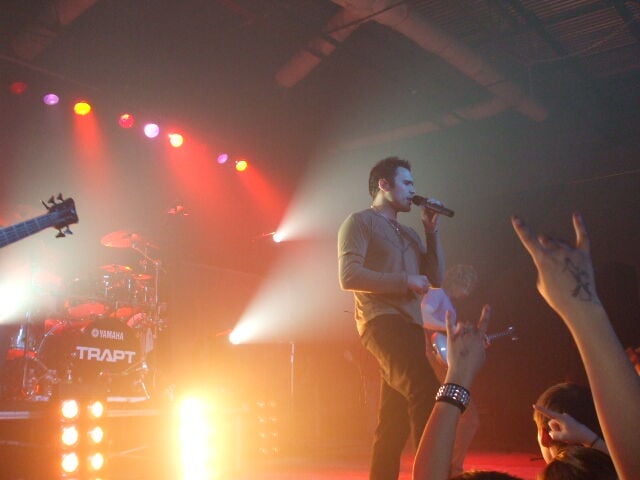 On Thursday, September 3rd, Fairbanks live music venue The Spur announced a ‘Back The Blue’ concert in support of local law enforcement. Headlining the bill was nü-metal quartet Trapt, a platinum-selling band that in recent years has made more headlines for outrageous social media interactions than for their music.

Shortly after The Spur’s announcement, frontman Chris Taylor Brown shared the event posted to Trapt’s Facebook page along with a 400-word caption.

“I really wish we had more opportunities like this upcoming event in Fairbanks, Alaska to “Back The Blue”, but liberal city governments are just not allowing it,” the post began. Only a few dozen words later, the Black Lives Matter movement was invoked. “BLM makes claims that are not backed by stats and I hope this country realizes that we can’t make national government policy from cell phone footage alone.”

By the end of the post, “It was the same thing with the Michael Brown “hands up don’t shoot” LIE that pushed BLM into the mainstream in August 2016!”

Ten hours later, the venue would publicly announce that they’d dropped Trapt from the bill. “We, The Spur, want to build community support for our local law enforcement. Unfortunately, the band we originally had, has taken away from the intent of our establishment.”

Trapt’s lead singer Brown tells me this has happened to him before. “Four shows over the last two years, [venues have] caved to the liberal mob,” he explains. “I guess [The Spur was] getting shit from a bunch of crazy liberals who saw the post and bombarded. I’m sure they were hitting them with threats, because that’s what they do, and then you don’t want the band to play because they ‘Back the Blue’?”

Lifelong Alaskan Jori Clawson co-owns The Spur. She says that she was unaware of the band’s political outspokenness, although she recognized “Headstrong”, Trapt’s 2002 #1 single.

“It’s hard for anybody in Alaska to get good bands, anybody with a name, so when someone gives you an opportunity, go for it,” Clawson says. “I had to look them up. I was like ‘I totally know that song’. I talked to a few of my friends that knew them and they were like, ‘Oh yeah they’re awesome, that’d be great.’”

However, once Trapt’s announcement went up, Clawson said she knew the band and event were not a match.

“Our intent was not to make this political,” she says. “Our intent was specifically to support our local police department because locally we’ve had funding issues. And we know that they’re short-staffed and we wanted to contribute back however we could because they help us and we want to help them.”

As for the response online? “It was very 50/50 and we don’t want to divide the community any more than it has been,” Clawson says. “We’re a multicultural facility and we want to do what’s best for everybody and the best interest of our community which is just supporting our local police.”

The event was coordinated by third parties, so Brown and Clawson have never spoken. But when asked what he’d say to The Spur, Brown said, “I’d say before you decide you want to do something and back a cause, make sure you really want to do it. You don’t book a band that backs law enforcement and expect them not to talk about it.”

On Facebook, Brown was more strident in his criticism. In a 500-word post — again on the Trapt official band page — Brown wrote, “News flash! Anyone even doing a back the blue show is making a statement.” Several hundred words later, Brown continues, “Hopefully we can find a back the blue show sponsor who aren’t full of hypocritical cowards.”

I asked Clawson whether a Back The Blue event is political by its very nature.

Although the October 30th event has no headliner as of yet, Clawson says an equally-recognizable substitute is in the works.

“The event is still planned, we’re still working with that promoter down in Anchorage, there have been a couple different names thrown around, nothing confirmed yet,” she said.

On their Facebook page, The Spur asked followers to weigh in on possible replacement Puddle of Mudd. It was quickly pointed out that their. frontman. and sole original member, Wes Scantlin has a Wikipedia page in which the largest section listed is “Controversies”.

That post from The Spur was later deleted. Presumably, the search continues.