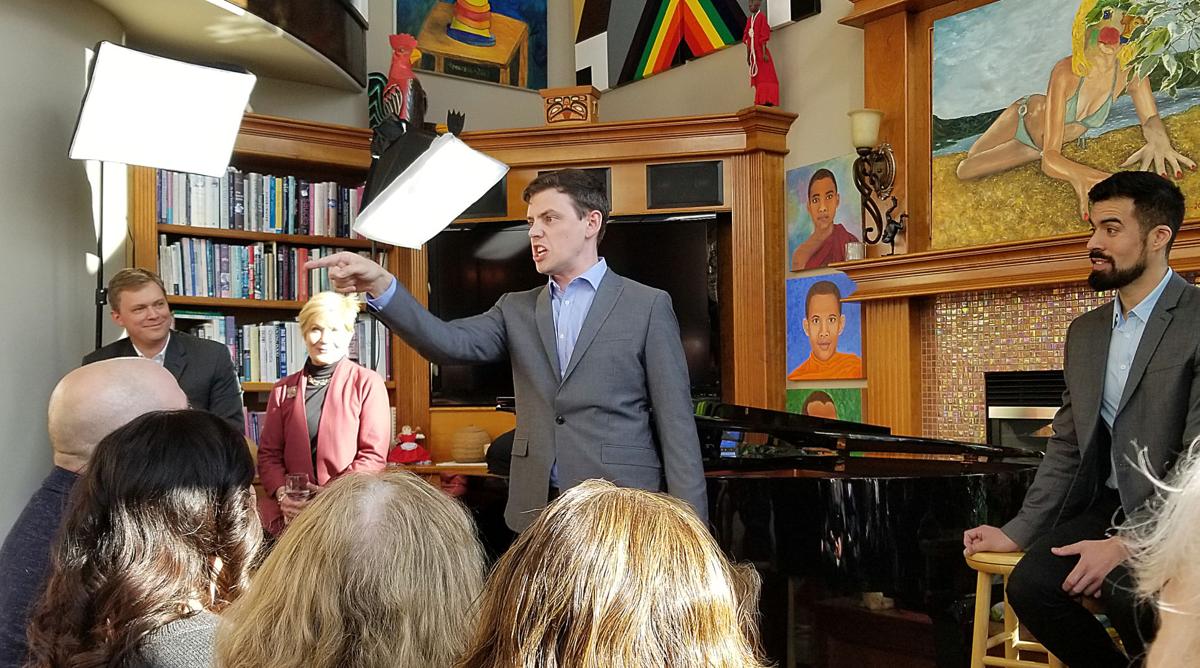 Lindsey Ohse answers a question with the cast of La Boheme during the Q&A portion of Anchorage Opera’s Take One event on Sunday. 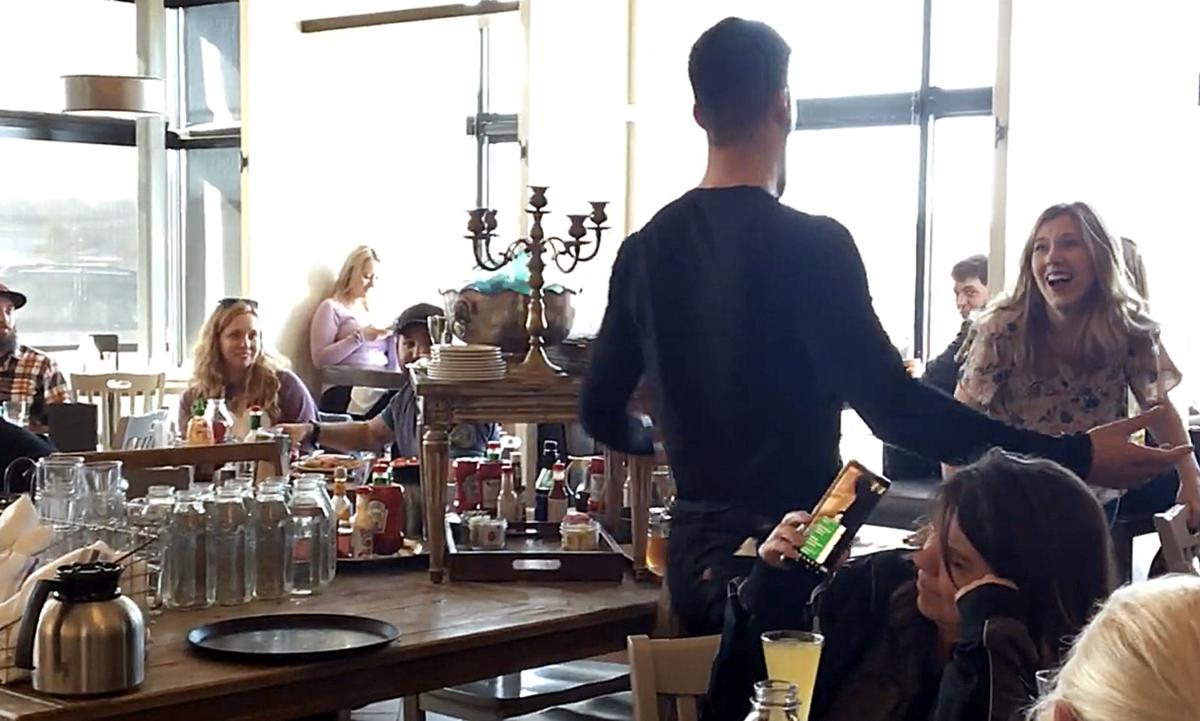 Luis Alejandro Oroszo, left, and Lindsey Ohse perform during a flash mob performance at South Restaurant in Anchorage on Sunday. 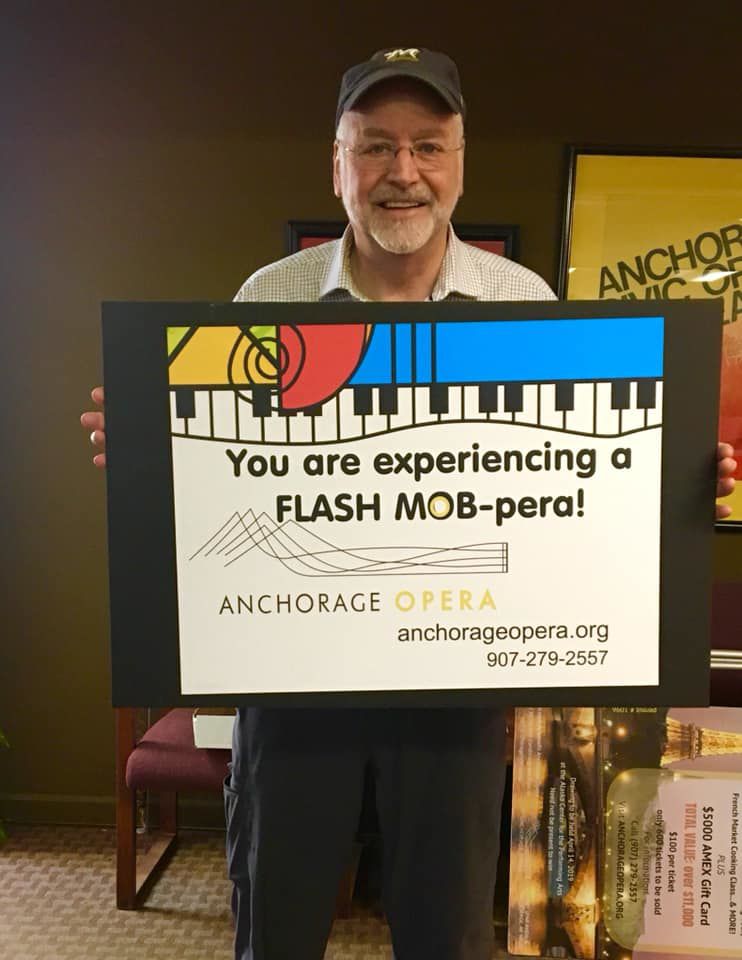 Lindsey Ohse answers a question with the cast of La Boheme during the Q&A portion of Anchorage Opera’s Take One event on Sunday.

Luis Alejandro Oroszo, left, and Lindsey Ohse perform during a flash mob performance at South Restaurant in Anchorage on Sunday.

Growing up in Eagle River, Michael Tallino always had music as part of his life. But it wasn’t until college, when he sought out a vehicle for his passion, that Tallino discovered opera.

“My dad was the church music director at St. John’s Orthodox (church) in Eagle River, almost in Chugiak,” Tallino said. “I’d try to knock over his music stand as a kid when I was in the choir there.”

Tallino left for a private school in Kodiak, where he was able to study composition, choir and piano for choir, and after returned to Anchorage to enroll at UAA.

“I had done a lot of church choir stuff and was trying to find stuff to get involved in in town. (UAA professor) Mari Hahn was my teacher at the time and she said I could get involved with concert chorus or chamber singers, but then I’d have to get a tux, so I thought, ‘well, what else could I do?” Tallino recalled. “Anchorage Opera was where I got my feet wet. I saw my first opera live there, did my first small chamber opera with them at APU in 2011… Whoa, I’d never done that before; that was super-cool. I auditiioned for just about every single show Anchorage Opera did after that and I found out what I needed to do to get in more regularly.”

In those half-dozen operas, Tallino found himself on stage in minor roles, or off stage as part of the choir. It was during a production of ‘Rigoletto’ those roles that Tallino met Maestro Brian DeMaris, who encouraged the eager youngster to pursue his masters degree. DeMaris wrote him a letter of recommendation and months later, Tallino was enrolled in the graduate program at Arizona State University, where DeMaris just happens to teach.

Late last year, the two worked together on Handel’s ‘Xerxes’, and through some manner of coincidence they’re paired together again next weekend at the Performing Arts Center in Downtown Anchorage for Anchorage Opera’s final offering of the year, Puccini’s ‘La Boheme’, with DeMaris as conductor and Tallino in the role of Schaunard.

“I had sent some e-mails to (Anchorage Opera director Reed Smith) and said I was interested in Anchorage Opera, what can I do?” Tallino said. “I think he may have gotten a school recording of my work and I got in with them. This is my first time doing this role so it was good that I could be coached by my conductor before being able to come up.”

As Schaunard, Tallino finds himself in, by far, his biggest role in professional opera, playing one of four young men living their Bohemian lifestyle in 1840s Paris.

“Schaunard is a musician, but his roommates don’t think very highly of his music. He sings and they have to say, ‘stop,’ or ‘basta, basta!’” Tallino said. “But they live their lives; they are who they are; they don’t plan for tomorrow, they just try to be who they are. It’s easy to relate to — playing their music, travelling, performing, living paycheck-to-paycheck… they’re willing to sacrifice anything for their art.”

Tallino said ‘La Boheme’ is a perfect introduction to any opera neophyte.

“Maybe there’s ‘Carmen’ but ‘Boheme’ is arguably the most famous opera,” he said. “It has all the different things — comedy, the love, the tragedy — you really get the whole experience that opera is. The music is just stunning, phenomenally beautiful. Puccini has a way of writing different melodies and weaving each character into that part.”

Suffice it to say that for Tallino, opera provided exactly what he was looking for, and not just because it doesn’t require formal wear.

“The singing in opera is so physical and so raw; it is as much about how my body feels,” he said. “It’s almost like an athletic endeaver. And also there’s the acting, the interaction with the other people on stage — acting, singing, the orchestra, and so much production singing, dancing, chorus work, set design. It really has all the art forms happing at the same time… For me it’s as much just being a part of it as it is being on stage. It’s so team-oriented; it requires everyone to be a part of it.”

• Friday, April 12 @ 8:00 PM – Discovery Theatre in the Alaska Center for the Performing Arts

• Saturday, April 13 @ 8:00 PM – Discovery Theatre in the Alaska Center for the Performing Arts

• Sunday, April 14 @ 4:00 PM – Discovery Theatre in the Alaska Center for the Performing Arts

In Italian with English Supertitles