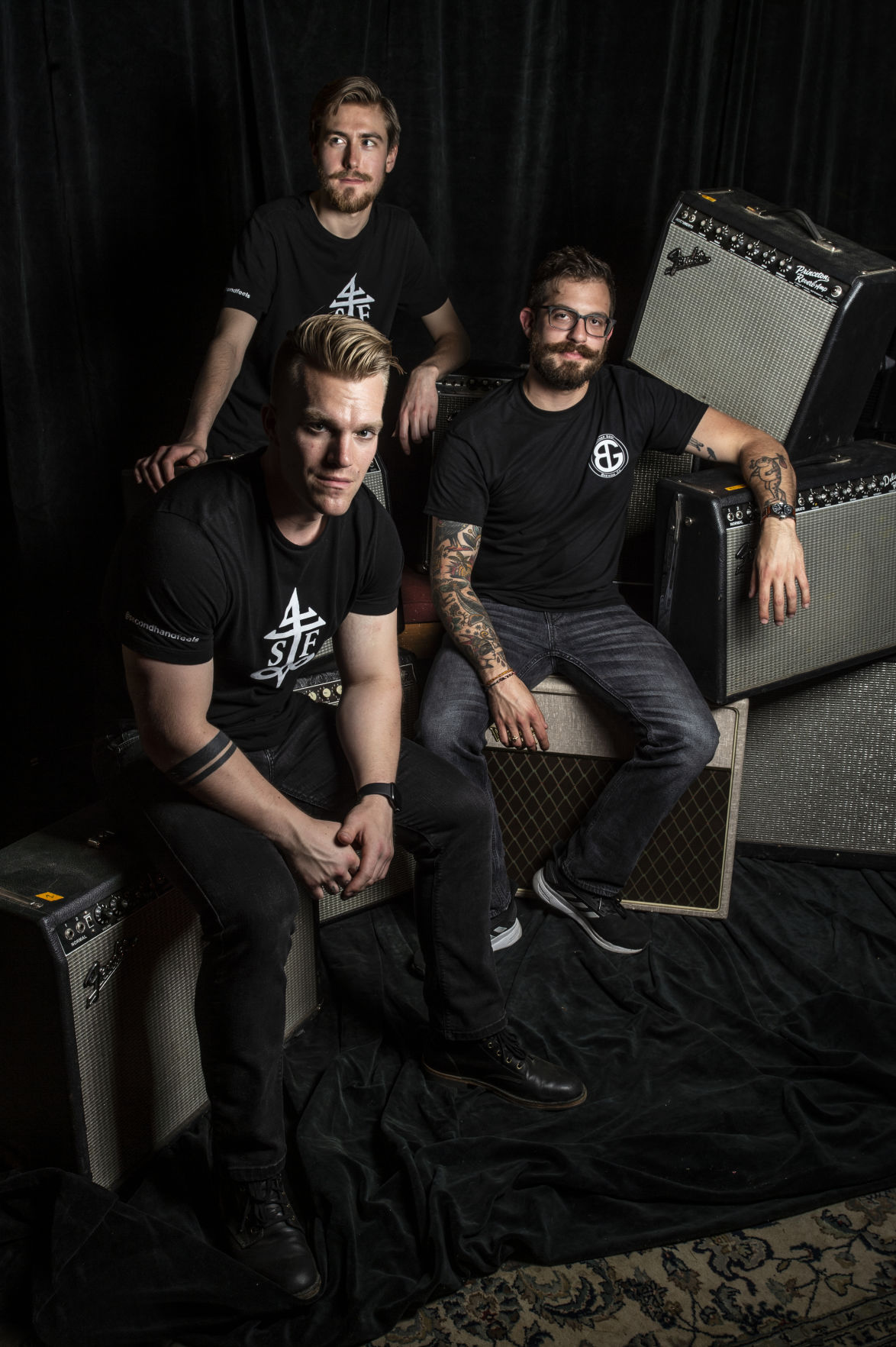 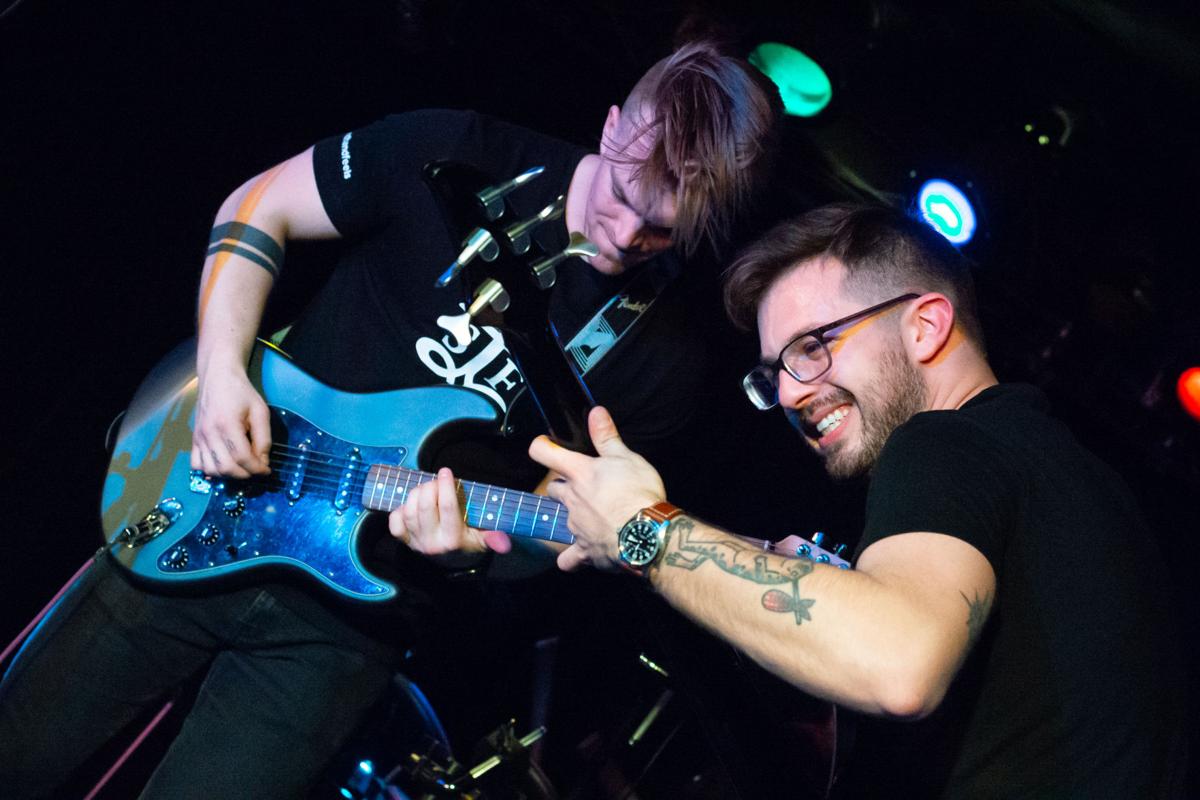 There is no shortage of talented musicians in Anchorage, but sometimes it can take a while to find the right combination of players. In the case of up-and-coming rockers Secondhand Feels, it took a complicated game of seven degrees of separation to finalize their three-piece outfit.

Despite having more lineup changes than gigs, Slama and Lematta continued to jam while hunting for a bassist. Once again, a friend of a friend provided the answer, and Philly-born bassist Josh Zullo was invited to jam. The only problem was that the band’s rehearsal space was not exactly in a legal location.

“We can’t tell you where it is, but basically when I showed up the first time it was to a vacant building, and I was pretty sure I was going to get arrested,” recalls Zullo.

Nicknamed the “Jam Shack,” the sketchy rehearsal space was an uninhabited apartment building on the Southside.

“I’m pretty sure that Josh thought we were going to murder him and leave him there,” chuckles Lematta.

Creepy abandoned building aside, the newly formed band’s inaugural jam session was a success, and the three found they had a natural connection as well as a shared love of Third Eye Blind. Armed with enough liquor to feel creative, the band quickly began writing original songs, but it wasn’t long until they lost their rehearsal space.

“Once the ‘Jam Shack’ was inhabited, we moved over to the detached building next to it, but then that got filled too. So we shifted to a house my friend was house-sitting for and it was like this super old house with yellow, 70s carpets. It was freezing and dark, so we were running space heaters for hours before we could even practice. Looking back, its kind of surprising we’ve come up with any quality music,” says Slama with a playful smile.

Incidentally, the band came up with an eclectic mix of songs that cross genres from alt-rock to funk, making them one of Anchorage’s most unique bands.

“We thought about settling into a niche, but I think we realized that that just isn’t us,” says Slama. “We listen to all kinds of music, and I think we catch inspiration from everywhere, so naturally, our music is going to have a bunch of different sounds.”

Lyrically, Slama says his style is heavily influenced by Third Eye Blind’s 1997 album of the same name. The album featured hits ‘Semi-Charmed Life,’ ‘Jumper,’ and ‘How’s It Going to Be,’ but Slama was more enthralled by the album’s darker songs ‘Motorcycle Drive By’ and ‘God of Wine.’

“That album is literally my favorite album ever—like it just kills me every time I hear it,” explains Slama.

Every bit the brooding frontman, Slama’s lyrical intensity, is balanced out by the high-energy of Zullo, who is never seen performing without an ear-to-ear grin.

“My background is more in metal and punk, so it’s definitely different playing with guys, and in a lot of ways, I have had to develop a new style of playing,” says Zullo. “I try to bring a heavier element to the music, and I think Craig really supplements that sound with his drumming.”

Characteristic of Zullo’s unique playing style is his inability to stand still on stage. Easily one of the most entertaining bassists to watch, Zullo’s bandmates joke that his kinetic energy is the root cause of his slim frame.

The yin to Zullo’s yang, Lematta gives the band a grounding force with his technical ability on the drums.

“[Lematta] has this cool, really intense mechanical drum style that you’d mostly hear in punk and metal. Obviously, we don’t play a lot of straight punk, but his drumming adds a unique sound that defines us as a band,” says Slama. “Honestly, I don’t think there is another band that sounds like us.”

After spending the summer gigging at progressively bigger venues, Secondhand Feels has become a mainstay at Van’s Dive Bar. While they have not released their first EP, the band is continuing to hone their unique sound through frequent live performances—and a few boozy nights.

“I think our bromance as a band happened because our souls melded over all the alcohol,” jokes Zullo.

You can catch the Secondhand Feels live at the Carousel Lounge on Saturday, November 2 at 10pm. Can’t wait until then? Check out our newest Basement Tape when it drops on Thursday at AnchoragePress.com.

There is no shortage of talented musicians in Anchorage, but sometimes it can take a while to find the right combination of players. In the ca…