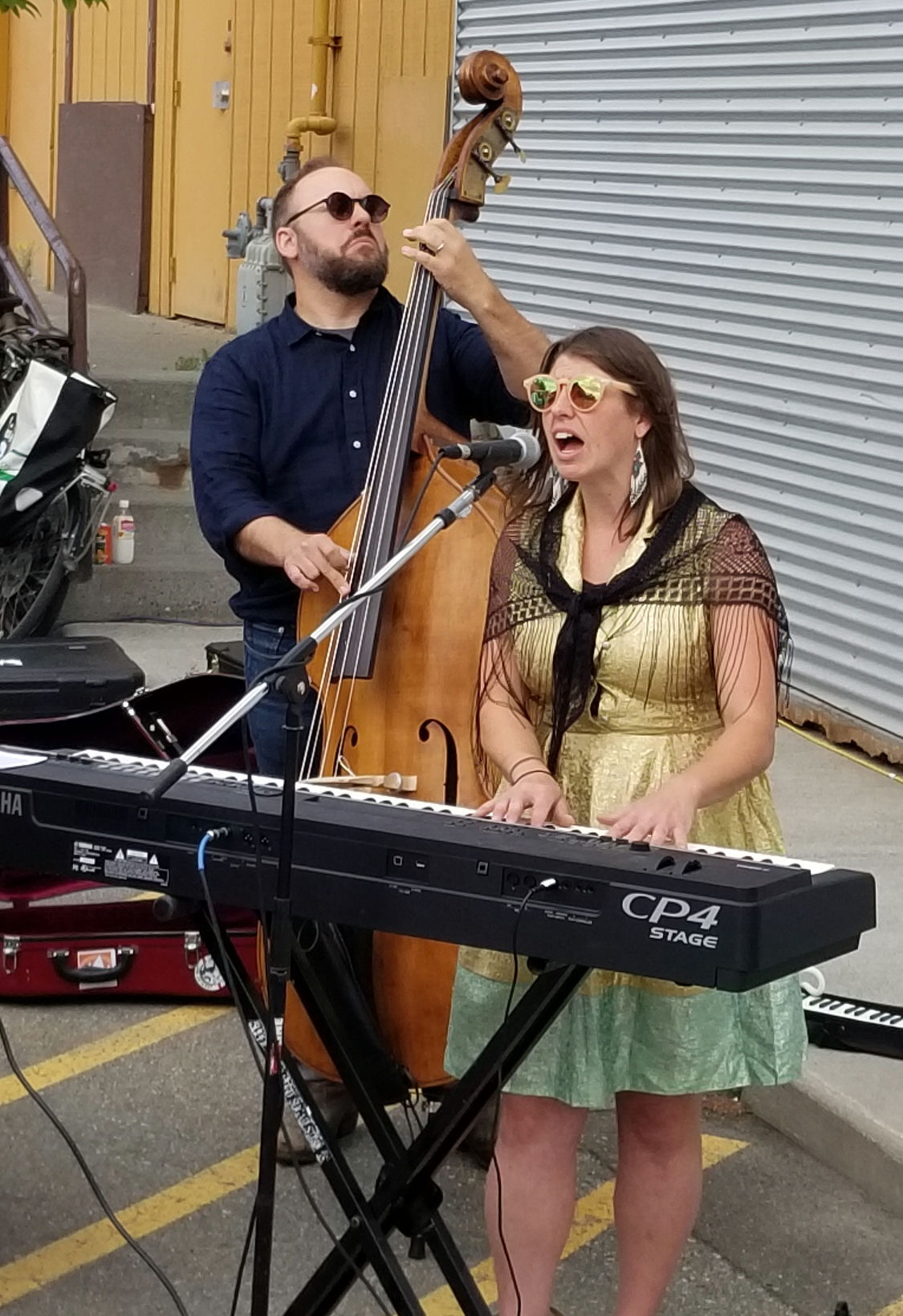 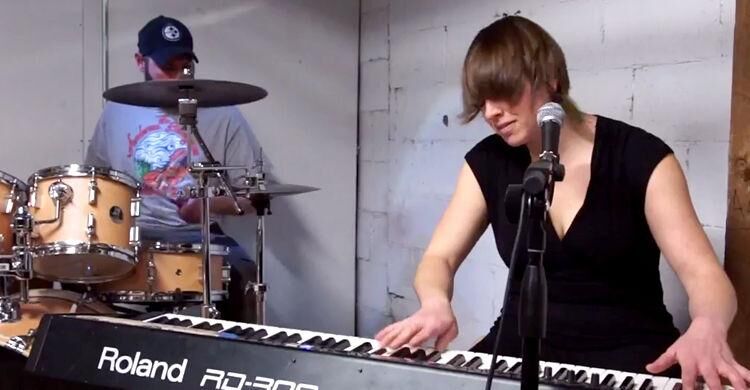 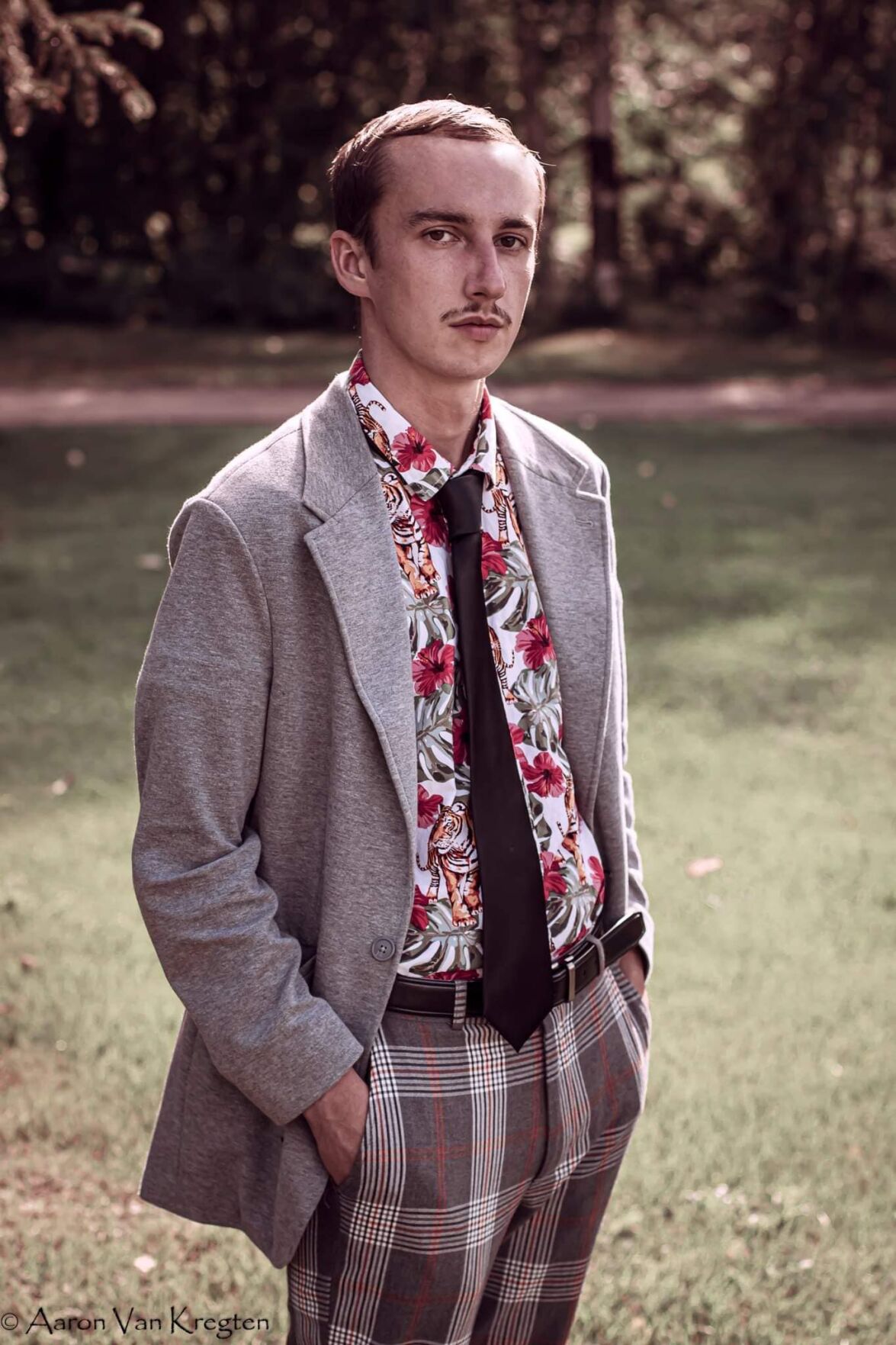 The Anchorage music scene is bustling with great performers and songwriters, but few are as successful or prolific as Kat Moore. When she’s  not teaching piano or on keys and singing with The Super Saturated Sugar Strings, or performing solo as The Forest That Never Sleeps, she is one of the busiest musicians in the city. Sporting incredible skill with the piano, and heartfelt, intense, and sometimes comedic lyrics, Kat has a great deal to offer.

Kat began her musical journey playing piano as a young child. Growing up, a music teacher visited her home to give her older sister lessons. “She would take lessons but I was too young, so the piano teacher would leave and my sister would leave, and I would play all of the songs on piano,” she said. “I could just hear it. It was just a thing that made sense.”

Kat played piano by ear in her home throughout her childhood, and began to write her own songs in her early twenties. “I was really shy; it was just emo songs for myself, that I would maybe sing for somebody else if it were post-bar and I was really drunk or something,” she said. Once becoming a part of the Sugar Strings, Kat finally began performing her own songs onstage.

In the beginning, Kat made music simply to entertain herself. Looking back, she described it as, “just this joyous thing.” But for a true artist, that purpose evolves quickly. “When I first became a musician, I don’t think I had goals,” she recollected. “I didn’t have any expectations. How can you have goals if you don’t have any expectations?”

A songwriter at heart, Kat’s main focus as an artist is to effectively convey emotional concepts. “I feel like I’m much better at channeling my artistic side than I am my technical side,” she said. “I think I can get emotional ideas across, and I think I can help listeners articulate their own emotions. I’m all about the emotions.”

Technical prowess may be a secondary goal for Kat, but the high skill ceiling of playing instruments is a major fascination of hers. A student of hers once told her, “I just can’t wait until I know everything about music. It’ll be so nice to be done.”

Kat replied saying that she could teach her everything about a particular song, but the journey of pursuing musical prowess is never over.  “There is no end to music; it is the one thing that is beautifully infinite,” she told me. “If you deal with finite ends, music can be really trying.”

Kat has found a level of achievement unknown to most local musicians, but as an artistically minded person, the business side of things still presents struggles.

“My biggest weaknesses are being kind of disorganized with time and erratic with my practice schedule,” she said. “I think as a freelancer you have to hold yourself really accountable, and routine is really huge.”

Regardless of business, Kat’s experience with music has been a beautiful and transformative thing.

“It has been therapy, I feel like, in so many ways,” she said. “I’m really grateful for that.”

Aside from the internal benefits of playing instruments and songwriting, being a performing musician has improved her connection with those outside of herself as well. “The friendships that I’ve built through music are so incredibly deep,” she proclaimed. “They are like family.”

But making music with a focus on performance is difficult in times like these. When groups of people existing in close proximity with each other is dangerous, an ethical dilemma is presented for performers. “It’s weird because I feel like right now, our world needs music more than ever,” she told me. “If I’m a musician and I identify as a performing musician, and I can’t be a performing musician, then who am I in this moment?”

Even when live performance and social interaction are not an option, Kat still finds joy and value in what she does.

“When I’m playing music; especially when I’m playing piano by myself; it’s this hypnotic, altered state of just being in another world. It’s kind of like transcendental meditation,” she said.

Kat does not identify as a typically spiritual person, but finds that making music brings her to feel one with a higher power of some sort. “The only time I really feel that is when I’m playing music, or when I’m deep, deep, deep in nature, or when I’m with a person that I love. Those are the times that I feel wholly in tune with the universe.”

Alaska is home to many wonderful artists, and Kat Moore is honored to live and work alongside them.

“I wouldn’t be the same person I am if it weren’t for our community and my friends, and all the art that everybody makes,” she told me. “That’s the stuff that moves me in this world, and I’m constantly speechless and spellbound by all the amazing stuff that people do.”

As with many musicians, Kat is eager to get back into the swing of performing once public health allows it. In the meantime, she continues to produce new material and educate her students. When asked if there was anything that she wanted people to know about her, Kat responded, “My thumb toe, my captain toe, is shorter than my other toes, which apparently means I’ll never win an Olympic gold medal for running. Or so I’ve heard.”