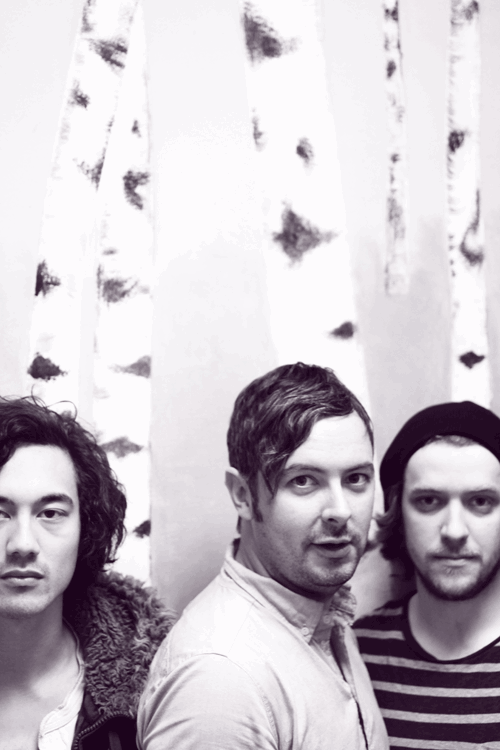 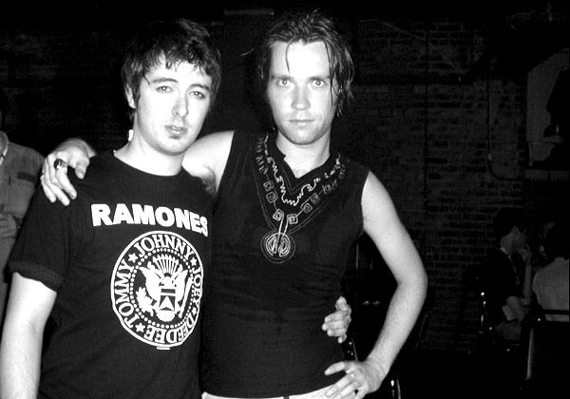 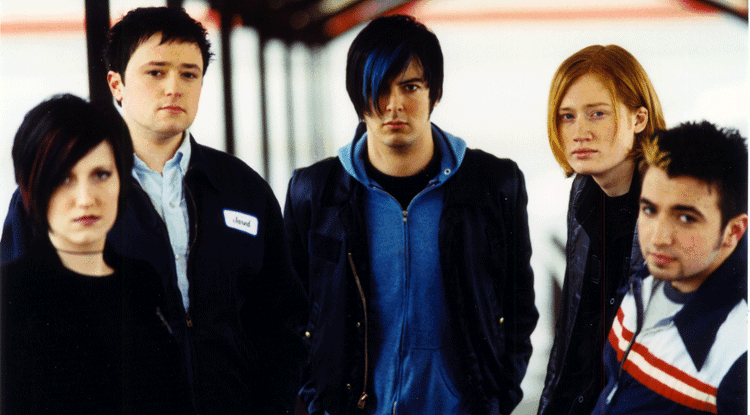 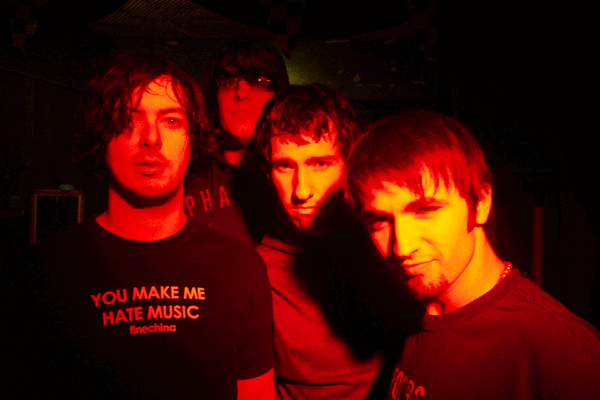 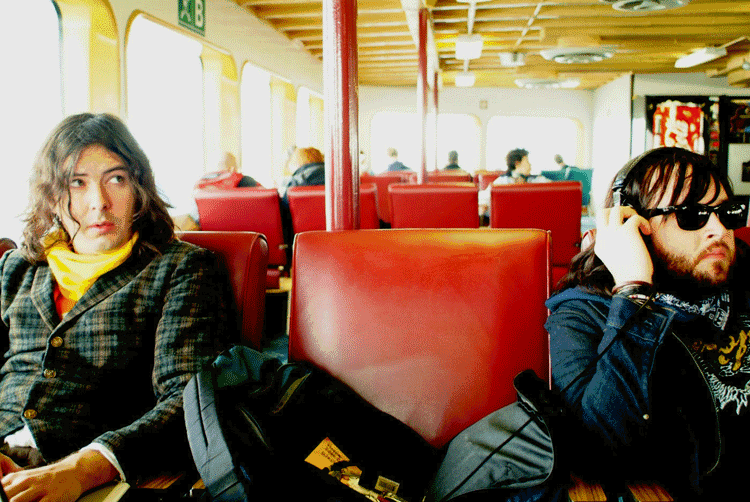 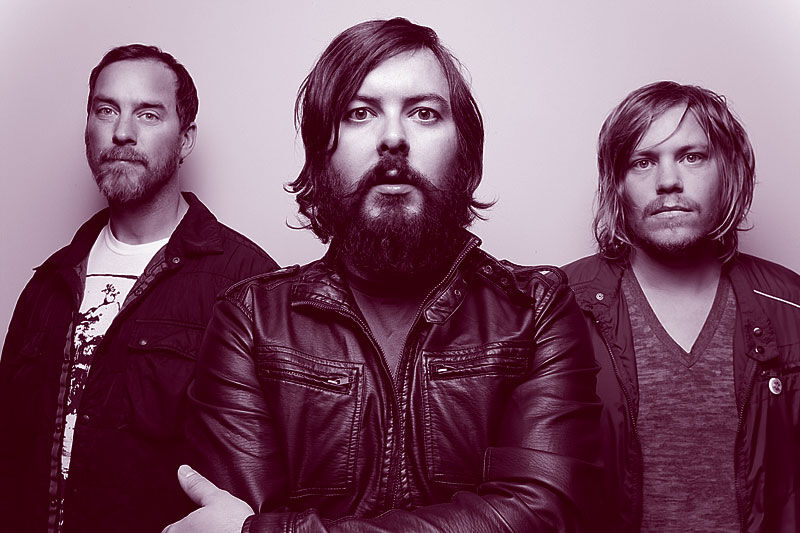 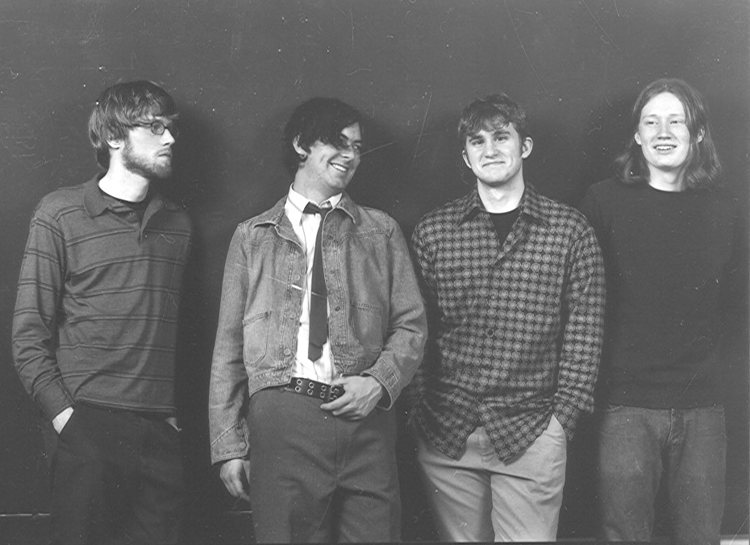 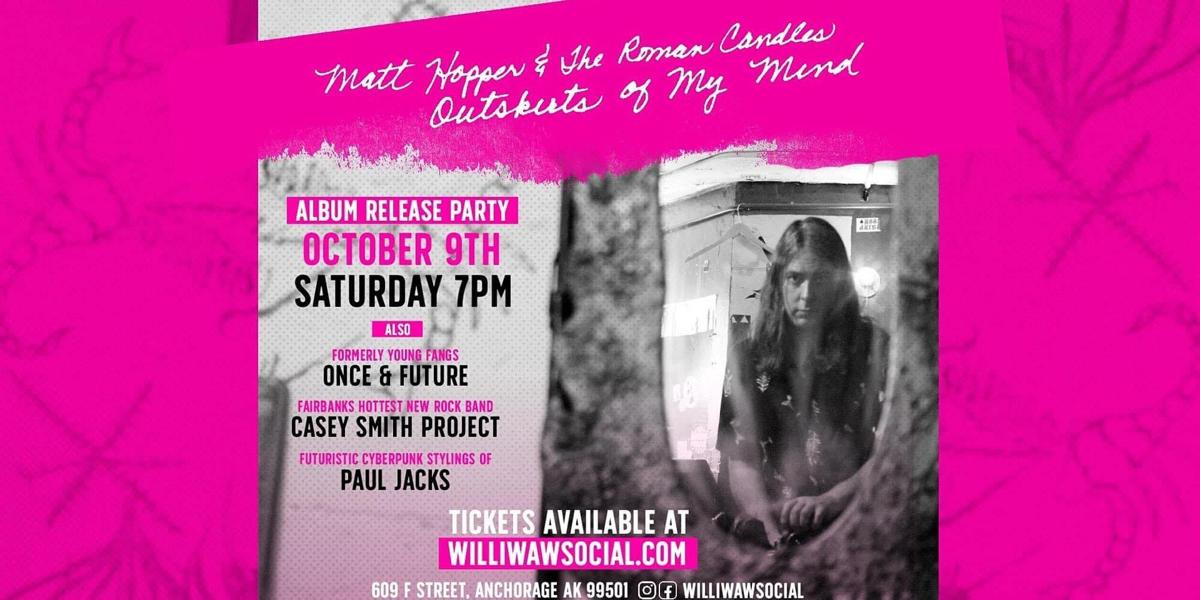 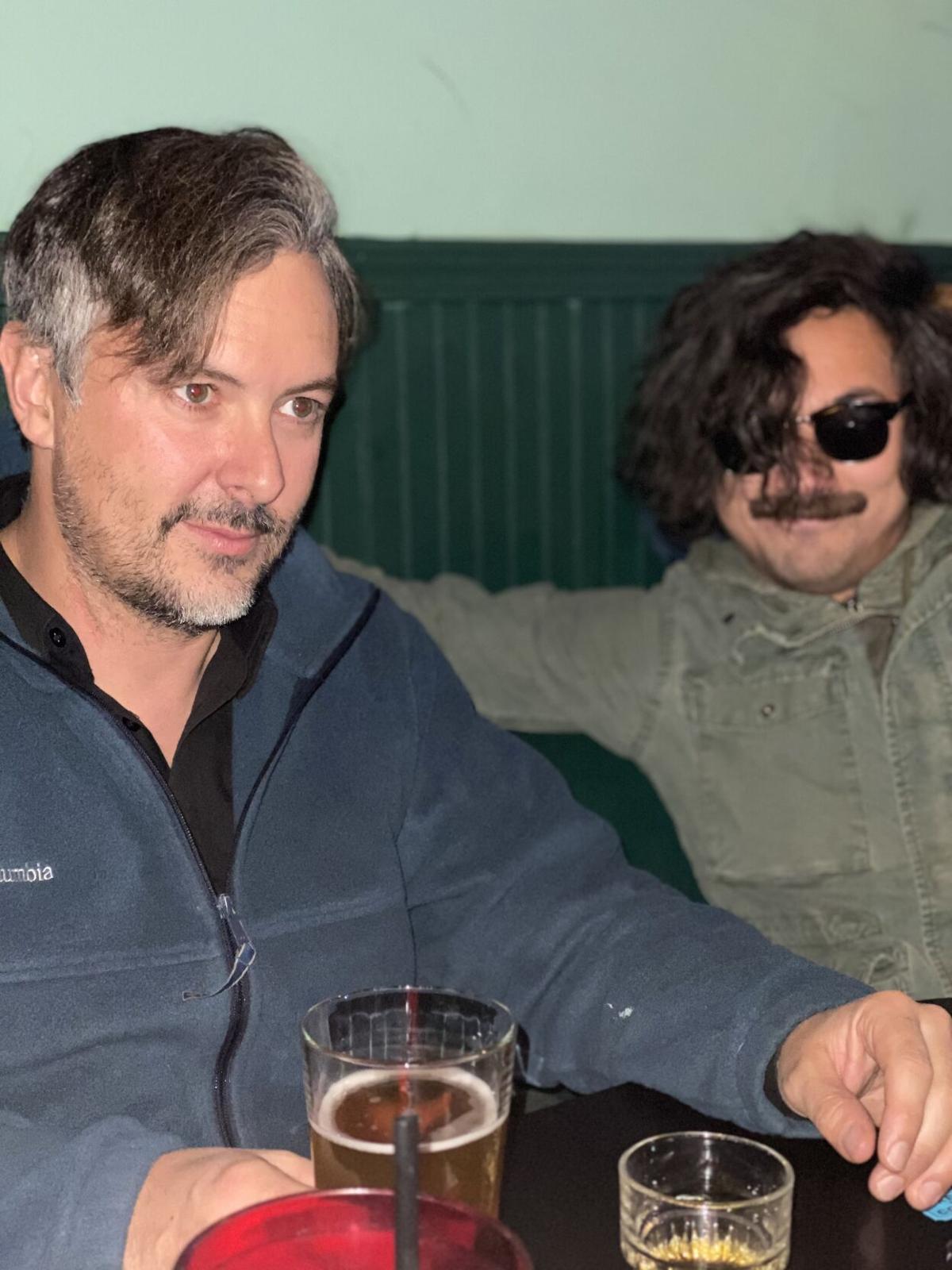 Matt Hopper, left, and Derek Mangrobang, who in his 12th year with Matt Hopper and the Roman Candles is the longest lasting of the more than 100 who have been in Hopper's band.

Twenty years ago, Anchorage knew no bigger rock star than Matt Hopper and his Roman Candles.

More than 100 bandmates, performances in 48 states and three tours of Europe later, the rambling troubadour who borrowed his band name from Kerouac’s ode to the ‘mad people’ in ‘On the Road’, finds himself back in his hometown, waiting tables at Glacier Brewhouse and getting set to release his 12th album next Saturday night at Williwaw.

The title track ‘Outskirts of my Mind’ has been more than 15 years in the hopper. Co-written with prolific poet Cameron McGill back in 2006, ‘Outskirts of my Mind’ gives Hopper the kind of space to play around as the road-weary existentialist that in another universe might have made him the sixth member of the Traveling Wilburys.

“I can’t believe I sat on it since 2006,” Hopper said over the noise of Monday Night Football festivities at Humpy’s and the nagging of his drummer Derek Mangrobang, the longest lasting of all Roman Candles, now in his 12th year. “Firecracker is a good song. It’s also the name of my first EP ever. That’s a nod to Kerouac again, a nod to living life to its fullest and not being afraid of failure. It’s also about being lost in this world; not knowing what to do, what the next step is and persevering through to make things happen.... ‘Sentimental Love’ was written in a whole batch of tunes. I wrote a whole bunch of emo shit and one beautiful love song.”

Recorded over three days at the Seattle-area studio of Matt VanDenburgh, who built it to record what ended up being the last Soundgarden record, ‘Outskirts of my Mind’ probably best shows the diversity of Hopper’s range in rock and pop, country and folk.

“This is my Portland album,” said Hopper, who lived in the Rose City from 2016-18 before ‘a couple of missteps with bandmates’ curtailed that period of semi-stability and sent him back on the road until COVID curved that road back home to Alaska. “Chris Cornell sang on some of the microphones I sang on. It was kind of a cool spot to make a record.”

Raised on the alt rock songbook of the 1990s, Hopper began his music career as a teenager recording pop albums in his bedroom, aptly titled Bedroom Pop 1 and 2. In 1999, when a student at UAA, he and a drummer opened for a band called Joy Electric one night at the all ages Gigs Music Theater. The next day his drummer (Steven Ward, Hopper recalls like it was yesterday) quit the band, becoming the first of what to date is more than 100 former band members to become a proverbial notch on Hopper’s bandleader bedpost.

Undeterred, Hopper soon found new accompanists and by 2001, the Roman Candles were a hit — especially with the under-21 crowd.

“We went from being just an Anchorage band to playing Senior Prom at Seward. We played out in Homer and Kodiak, so we started getting popular all over the state,” Hopper recalled. “We had a show up in Fairbanks and there were 200 kids at the show. We were like, ‘how did they find out about us?”

As the Candles gained steam, another band was rising in the local ranks. Anatomy of a Ghost, which would go on to become the Grammy-winning Portugal.The Man, was set to tour in the Lower 48 with Hopper’s band, when disaster struck.

“My band broke up. We totally imploded about four weeks before that tour,” Hopper said. “We played with that version of the band at the Borealis Theater at the Alaska State Fair. Anatomy headlined, but basically, at that point we had already broken up. We played the show and went our separate ways.”

It was now 2004 and Hopper was more committed than ever to the Gospel of Kerouac and headed out of state to take his shot his way. Seventeen years of rock and roll wandering later Hopper still hasn’t settled on a ‘real job’ for any longer than he’s had to.

“Anytime you settle down for too long you run the risk of becoming a ‘local band’ and once you become a ‘local band’ your value goes down,” he said. “I lived in Boise, worked as a music booker, had a bar, was a graphic designer, website updater, but that was just because my music wasn’t paying the bills. I hit rock bottom when I had my first European Tour and had just $42. I just happened to be broke. Europe was amazing. Italy was my first show, up in Milano, but we were down to the bottom. It ruined my entire relationship. I lost the love of my life, someone I lived with for three years. It was financial. That’s what started the whole problem.”

Pulling off a European tour on $42 would undoubtedly make Jack Kerouac proud — and Matt Hopper, too..

“It’s not like I’m ahead of the game, but I’m successful in the fact that I’ve maintained (the wandering lifestyle),” Hopper boasts. “I’ve made it to Europe three times by myself, put out my 12th album — all 12 albums self-financed, and all paid for from money made playing music.”

Have you thought about a reunion concert with all the former Roman Candles?

“I have thought about it. About 60 percent might show; the other 40 wouldn’t care.”

Why isn’t there a Mrs. Matt Hopper?

What advice would you give to the 20-year-old Matt Hopper?

Are you as famous as you’d like to be?

“No, not even close. I love seeing (Portugal.The Man frontman) John Gourley succeed; he’s a brilliant dude. He’s the most famous Alaskan artist at this point. I would love to be on stage rocking with 4,000-5,000 people with an awesome video display behind me.”

How did the rise of Napster and streaming music affect your career?

“It used to be you could put out a CD and recoup some costs but now you put out a record, people listen a couple times and then 300 things they’ll never listen to again. People used to give you 10 dollars a CD and if you could sell 300 of those you could cover your costs. Now, you don’t really recoup your costs. My costs are low because I’m a shrewd businessman and always looking ahead… I don’t want to put my shit on Spotify right away. I’d rather put it on Band Camp and ask people to support us for $10 before it’s free forever and ever. The music dream is dead.”

How has the Anchorage music scene changed in the last 20 years?

“I’ve completely lost the pulse of what’s going on here. Being back in Anchorage, nobody knows who we are, except for older people who don’t really go out anymore…. I left here for way too long. I'd love to be famous again in one spot. I’ve got some OG swagger here in Anchorage, but the scene totally different. None of my fans live here anymore. All my friends want to go out and see dubstep or EDM. I see some old friends of mine and they don’t want to hang out; too busy wrapped up with two kids and a wife and they don’t go out at all. That’s something for people in their early 20s.”

Have you reached your peak?

“I’m capable of writing really good songs the rest of my life, I think. This record is cool. It’s a bunch of stuff I wrote in Arizona, New York City, Anchorage, a couple in Idaho, Oregon — all my travels, you know. These songs have a worldly view to them. So, no, I’m not peaking at all. I’m sitting on four full-length records.”

What has having more than 100 ex-employees taught you about management?

“You can’t control your employees. They’re gonna do what they want to do.”

Have you thought of translating that management experience into some better paying ‘real job?’

“Yep, I have thought about that. I’m just not ready to give up on my own dream… I’m not about to quit for someone else’s dream. I’m 42 now, so I think I have 16, 17, 18, 30 years of life left as a performer. I don’t want to sit in front of a microphone in a recording studio. I’m still very vital and relevant.”

“Every record he’s released has been good,” Mangrobang said. “He’s never released anything that sucks. This is a really good record — really fucking fantastic. He’s a fucking moron but he has a great catalogue.”