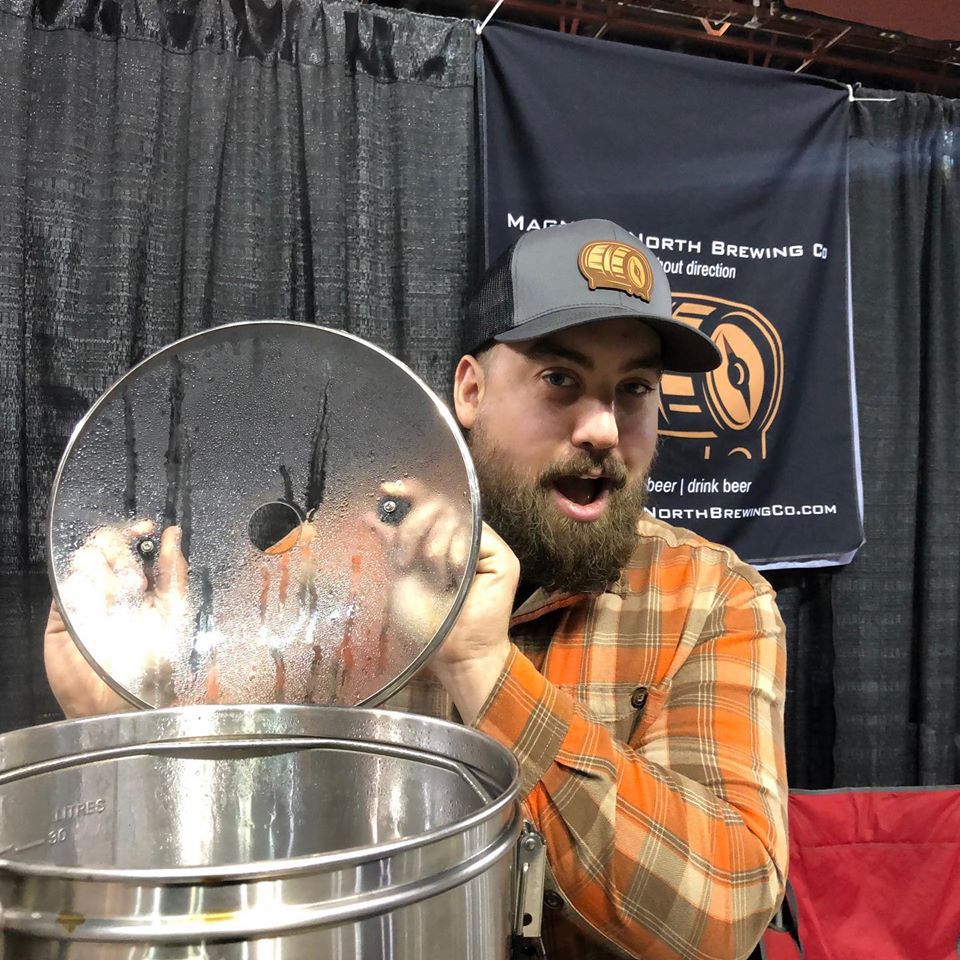 Alaskans are full of entrepreneurial spirit and Magnetic North Brewing Company’s owner/brewer Jeremiah Christian is a good example of someone who wants to bring a brewing dream to life, but in a different way.

“Sort of,” he replied when I asked him if he was starting up a brewing operation in Anchorage. “I’ll be licensed as a regular brewery, but the main driver is to create a space where people can come in and learn how to brew beer.”

This isn’t a novel concept in its entirety, but it’s indeed a twist on the more traditional approach where primarily homebrew supply shops provide a beermaking lesson or multiple lessons for a fee. Some provide homebrew and commercial beer samples as part of this. As far as I can tell, Magnetic North Brewing Company is the first – and at least the first in Alaska – to provide such a service in a commercial brewery.

It’s a niche business for sure.

“Do you homebrew?” Christian asked me during my interview with him

I told him my story.

“I used to brew beer at home,” I said. “I grew a lot of friends that way. But to me, the most expensive ingredient in homebrewing is time. When I started writing about beer for the Press, I had to make a difficult choice. I could either make beer and drink it, or I could drink beer and write about it. I chose the latter.”

It’s not that I don’t like homebrewing or got tired of it. I miss is and think about it all of the time. I started out on an electric stove in my kitchen, and eventually ripped out the perfectly good stove for a gas stove, which is better for homebrewing for a number of reasons. The moisture created in the process, and the smell – one I dearly love but Ms. Fermento ain’t so fond of – forced me to source a system to brew in my garage. I miss my huge set up where I’d advanced to the point of brewing two 10 gallon batches of beer a week on a half-barrel system.

By today’s standards, this is chump change in the homebrewing world. I know brewers that have fully automated, state of the art one barrel and bigger homebrew systems. The technology and ingredients have advanced logarithmically since I was dabbling in the alchemy. It would be like starting over for me if I ever decide to re-enter the hobby.

Still, back then, I was pretty proud of my system and my suds. I both bottled and kegged my beer and had two draft beer dispensers. I had a double-tap system upstairs and a triple tap system downstairs. At any one time, I had upwards of five different styles of beer and 25 gallons on tap. I grew a lot of friends in those days. I won a couple of awards in homebrew competitions, but was never the greatest.

It was time, not expense or desire that blew the flame out on my garage brewery.

“A lot of people have a similar problem,” says Christian. “I’m hoping this business will help people free up the time and energy to homebrew and I’m offering a space to get a batch done and have someone else look after it. I’ve got the equipment and space and all someone has to do is come in, create a recipe, brew it and I take care of the mess including all of the setup, cleanup and other time consuming chores associated with what’s otherwise an enjoyable hobby.”

The difference in this venue compared to a homebrew supply store brew-your-own opportunity is the availability of commercially brewed craft beer to enjoy through the process. And, there’s something to be said about brewing in a real commercially brewery, something I’ve only done a handful of times in life and consider myself lucky for the experience.

Christian’s homebrewing background suits him well for both commercial brewing and providing homebrewing instruction and experiences. In the Navy, Christian moved around and ended up in San Diego during the height of the craft beer explosion there. He started homebrewing in Jacksonville, Florida and kept up with the hobby after moving to Anchorage with his wife and attending school at UAA. His love of beer had him working at Brown Jug and most notably Alaska Denali Winery — an on-premise winemaking facility — where folks can come in and make a small batch of wine for a fee. This was the catalyst for Christian to take his homebrewing obsession to the next level.

Christian’s set-up to accommodate single brewers or groups by appointment as the business launches and he’ll add capacity as time marches on.

The cost includes the ingredients and the cans.

“I provide everything except the labels, but I can point to some online resources for special labels for the beers that people produce here,” says Christian.

Because Alaska’s troglodyte craft brewing laws allow for breweries to only sell up to five gallons per person per day offsale, Christian’s license limits a batch of beer going out of the brewery to that amount. Still, it’s enough.

“I’m still evaluating the law in that respect,” says Christian.

“Each batch will provide a minimum of 48 beers — or two cases; it all depends on efficiency,” says Christian. “Sometimes you get 52 if you minimize your loss and sometimes a few more.”

I wondered about just coming in to try some of his beers even if I didn’t want to make a batch of beer.

“Sure. Anyone can come in and buy and enjoy beer in the taproom; I’m set up for that. You don’t have to participate in a brew to drink the beer here,” says Christian. “You’re going to like this. I’m opening with four IPAs. People always walk into a new brewery and say ‘what’s your strongest or newest IPA?’ so I figured I’d make four different iterations in the style – a northeastern style, a black IPA, a double IPA and a brut. This way people can compare the nuances between them. It’s a great conversation starter.”

From there, Christian plans to loosely follow the seasons and feature new beers every couple of months. “I don’t want to get stuck with serving one beer all year round. There won’t be any flagships. I think every three months you wipe the menu clean and start with a whole new set and maybe a whole new style. You know, like saisons in the summer and bigger bolder beers like stouts in the winter,” he says.

Magnetic North doesn’t have a firmly established opening date yet. The best way to follow along is with the brewery’s website at magneticnorthbrewing.com and the brewery’s more frequently updated Facebook page.

If you want to enjoy the experience of homebrewing in the quickest, easiest and most economical format, Magnetic North would be a good option. I guess it’s a lot like test driving a car, only you’re test driving a hobby to see how it fits, feels and tastes. And, you can drink a commercially produced beer while you do it. From my experience with homebrewing, I think you’re going to like it.